PILC: A Call to Action

Last month, the Plumbing Industry Leadership Coalition (PILC) met in Washington, D.C. to discuss the current issues facing the plumbing industry to establish one, cohesive voice for the entire community. The plumbing industry comprises many facets, and though each sector may have several varying concerns, there are issues that affect us all equally.

PILC is a cross-sectional representation of executives from the plumbing industry, and currently includes 17 of the largest associations, professional societies, nonprofits and third-party laboratories representing the manufacturers, laborers, contractors, engineers and water experts from around the globe. It was founded by G.P. Russ Chaney, CEO, International Association of Plumbing and Mechanical Officials (IAPMO); Barbara C. Higgens, former CEO/executive director, Plumbing Manufacturers International (PMI); and Billy Smith, CEO/executive director, American Society of Plumbing Engineers (ASPE), who continue to serve as chairs of the coalition.

“Five or six years ago, we thought there’d be value in bringing together the leadership of the plumbing industry, and related industry, for discussing potential collaborations to address challenges facing our industry. We all have challenges — different challenges — but sometimes when we work collaboratively we can help one another in the spirt of cooperation and in moving the industry forward,” Chaney said.

The one-day event merely touched on the scope of topics brought up during the meeting, but the overarching theme was that everyone involved needs to stay involved throughout the year, and beyond. When industry leaders work together, it only helps to promote the industry as a whole.

“WaterSense and the Flint water crisis are good examples of how we’ve all been able to work together to address an issue that affects our industry, and I’m sure there will be others,” Chaney added.

Among the issues discussed were Legionella. In the 2016 PILC meeting, it was suggested that a coalition be formed to provide a non-technical, strictly plumbing-related document on the topic of Legionella. Pete DeMarco, executive V.P. of Advocacy and Research at IAMPO, said he’d like to provide the opportunity for to review other standards and guidelines that are currently in final stages of development, most notably, ASHRE Guideline 12. “I think it will be wise for us to hold off on this effort until we have the opportunity to review all the content currently or soon to be available and then collectively determine what else may be beneficial for the plumbing industry to have as a reference document pertaining to Legionella and plumbing.”

DeMarco also provided an update on the ASPE — IAPMO — WQRF Peak Water Demand and Pipe Sizing Calculator research project. This work has been concluded, and a new statistically based pipe-sizing formula and a complimentary, easy-to-use pipe-sizing calculator have been developed. The results of this work have been peer-reviewed by plumbing engineers and academic experts. The new method is intended to replace Hunter’s Curve, which has been used since the 1930s to size water pipes in plumbing systems, but results in oversized water pipes in homes and buildings due to today’s lower flow rates and fixture consumption values.

“Use of the new method will result in using smaller water pipe diameters in homes and buildings, reduce costs while providing both energy and water efficiencies, and help mitigate the growth of biofilms due to higher flow velocities,” DeMarco said. The new sizing method and calculator will appear in the 2018 Uniform Plumbing Code and WE-Stand, IAPMO’s soon-to-be published water efficiency and sanitation standard.

Other topics included tax exemption and water efficiency rebates. The rebates are not federally exempt, and as a result, customers are being taxed on the benefit they get from the rebate. Mary Ann Dickinson, president and CEO of Alliance for Water Efficiency said, “In the past when plumbing rebates were below the $600 IRS threshold, this wasn’t an issue that surfaced much, but it’s surfacing now with these ‘Cash for Grass’ programs, some people are getting checks for $20,000. It’s putting them in new tax brackets and causing huge controversy in the West.” 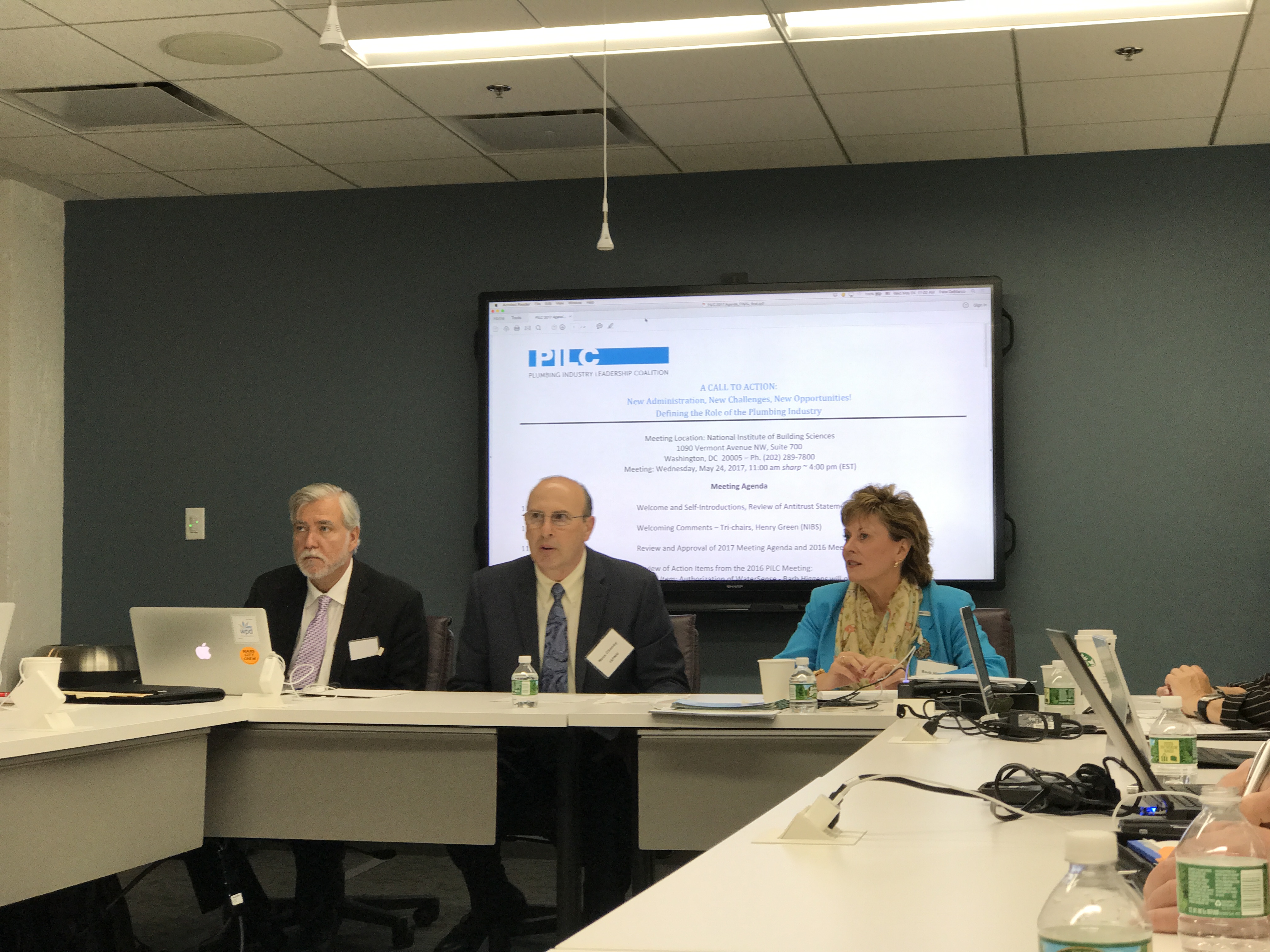 Dickinson began working last year to get tax exemption for the rebates, and has produced and circulated a resolution she hopes the members of PILC will sign on to. “It’s a heavy lift,” Dickinson said, “as we’ll need corrective legislation. We’re not breaking new ground with this; we just want to parody what’s already there with energy efficiency rebates.”

The group is looking at administrative options in getting the treasury to rule that, because energy efficiency is tax exempt and because water efficiency saves energy, water rebates should be tax exempt as well.

The resolution will be circulated to the members of PILC in hopes that other members join the cause. Though the U.S. Department of Treasury has already ruled the cost of a tax exemption itself would negligible, at this time Congress is looking to remove tax exemptions, not add any new ones. Depending on what they’re looking to remove, it is possible that the energy efficiency tax exemptions might end up on the chopping block. So, this issue is certainly one that affects the industry as a whole.

There was also an update on the WaterSense initiative. Higgens noted the completion of the 10-year anniversary of the Authorization of WaterSense celebration, and discussed the recent letter sent to EPA Administrator Scott Pruitt. The letter was supported by several members of PILC, as well as a number of manufacturers, water utilities, distributors, home builders, architects and industry professionals who urged the Administrator Pruitt to continue to fund the program.

“We have more in common than we don’t. Having the strength of the industry in collaboration has been really helpful to address the causes that affect all of us,” Higgens said.

The WaterSense program is a voluntary program, not a regulatory one, that costs EPA approximately $3 million a year to administer, but has one of the best paybacks of any federal program. It is an example of an effective collaboration between industry and the government on determining voluntary water efficient performance measures that can be used by consumers, industry and state/local governments.

Stephanie Salmon, federal government affairs consultant for PMI, talked about the President’s budget that was recently submitted to Congress and urged everyone to get involved in being a voice for the industry. The budget calls for a 31 percent cut from EPA programs, the largest cut of all the agencies, putting WaterSense in jeopardy. “The good news is the Congressional lawmakers, both democrats and republicans, aren’t happy with the budget, and traditionally the Congress does rework the budget,” Salmon said, “but we’ve got some work to do.”

Dain Hansen, chair of the High-Performance Buildings Coalition and senior vice president of Government Relations for the IAPMO Group, said that he personally handed the letter to Samantha Dravis, senior counsel/associate administrator for Office of Policy, EPA, just a few weeks ago after it was sent to Administrator Pruitt. “In addition to getting in front of key people in the EPA, we’ve also been targeting key appropriators on the hill, one of them being the Interior Subcommittee of Appropriations,” Hansen said. “They’re the ones that oversee funding for the EPA.” 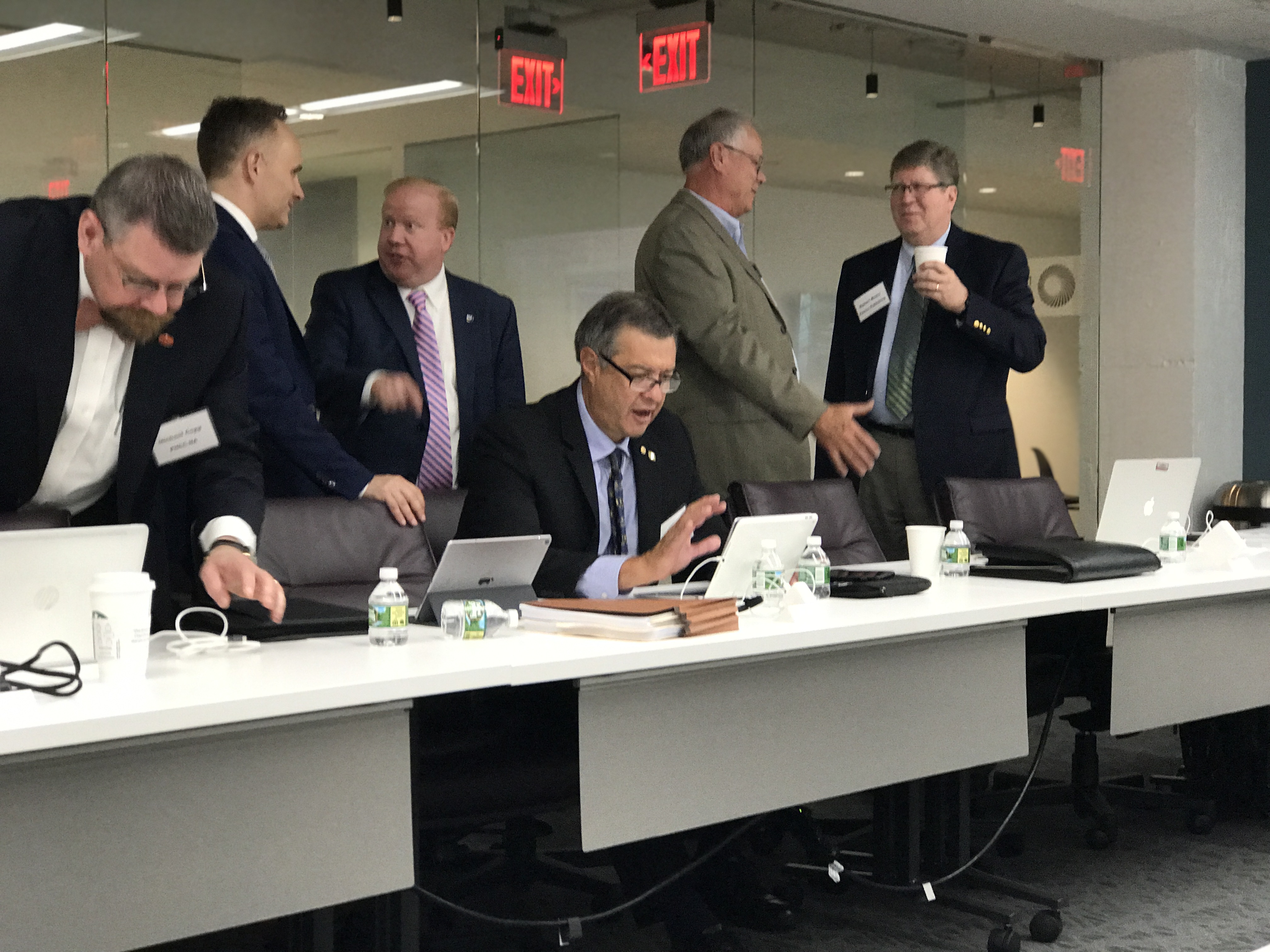 “It is actually included as a line item in the President’s budget when there has never been one before,” Hansen said. Congressman Calvert said that he would not be able to earmark WaterSense with a specific amount, unless the President proposed it. By identifying WaterSense for elimination in his budget, the Interior Subcommittee of Appropriations may now be able to counter and propose an amount to fund it.

“This can get tricky and in the weeds, but there could be a play here,” Hansen said. “In all likelihood, there will not be a budget approved this year and there will be a call for a CR (Continuing Resolution), which means the programs will just carry on unless the Administrator decides on his own to eliminate it. That’s why we want to keep the pressure on,” Hansen said.

The pressure is being noticed. Andrew D. Sawyers, director of the Office of Wastewater Management at the EPA and guest speaker for the meeting, assured the members that the letter submitted to Administrator Pruitt is not lost in bureaucracy. “Let me be very clear,” said Sawyers, “it is not lost. There is no doubt in my mind that this is something they are very much aware of.”

The members of PILC also discussed the future of the coalition, how it is structured and funded, as well as the challenges of finding common ground on issues that affect the industry. Though there wasn’t a consensus on how to proceed, one thing everyone agreed on was the importance of the group.

Next year’s meeting will be held in conjunction with the emerging Water Technology Symposium on May 17, 2018 in Ontario, California.