The secret recipe lies in the core of your values and starts from the top and trickles down.

Two men with a vision and 75 years later, Crescent Parts & Equipment continues to expand and reinvent itself. Its commitment to people—employees, customers, and vendors—and the role they play in propelling the business forward is the key to success and longevity.

The company, originally a parts store for coal stokers and gas burners, was founded in August of 1944 by Cosmo Giudici and Clarence Bartling. Today, a third-generation, family-owned wholesale distributor of HVACR parts, Crescent celebrates 75 years of existence with 19 locations across Missouri, southern Illinois, and southeast Iowa.

In the early 1960s, Cosmo and his son George recognized the need to shift the business and took ownership of the company. “Expanding into the air-conditioning and refrigeration business opened the door to Crescent becoming a year-round business,” says George Giudici Jr., current president and CEO of Crescent. “It also opened the door to a whole new market, with expansion opportunities that followed that they were just simply ignoring for the first 20 years.”

Within 10 years of that decision, Crescent was no longer just a supply house. Cosmo and his son George Giudici Sr. witnessed the company’s rapid growth, and within another 10 years, it became the leading refrigeration wholesaler in the St. Louis area.

After nearly 30 years of running the business, George Sr. passed the company down to his seven children, with his eldest son George Jr. taking over as president. “All of the kids were encouraged, and perhaps expected, to be a part of the family business,” George Jr. says. “I think I was pegged for president primarily because I was the oldest male in the family. But even beyond that, I have been primed for the role. It’s the only job I’ve ever had and the only job I ever wanted.”

Cosmo set the tone from the beginning that the constant that would carry the business forward was to always remain employee focused. “From what I know, his goal was to always get the best employees and treat them with respect and dignity,” George Jr. says. “That comes from leadership and filling those shoes has been my North Star.”

George Jr. has been president for nearly 30 years now and admits his fears center around being able to faithfully follow in his father’s and grandfather’s footsteps. “I always push myself to live up to their standards,” he says. “It’s almost a ‘not on my watch’ type of mentality, or sometimes I just refer to it as a ‘healthy paranoia’ where if I get too comfortable, it’s time to reevaluate the situation.”

It’s not that George Jr. isn’t focused on revenue or further expansion. “I knew that under my watch, I wanted the company to be a predominant player,” he says. “But I know to do that effectively, I need to approach the business with the same employee-focused mindset of those before me, because ultimately, our people are the ones who will take us over the edge. You lead by example, you respect everyone, and the rest will fall into place.” 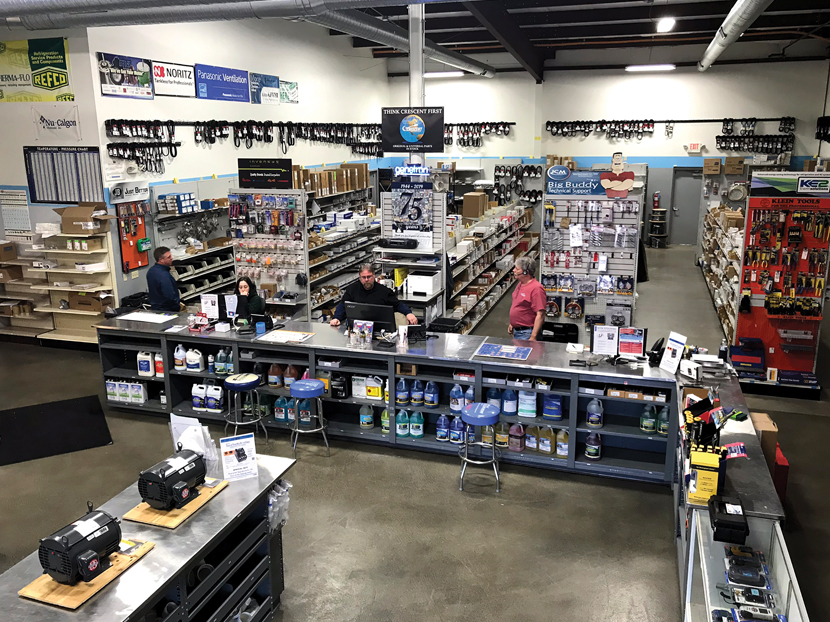 In addition to keeping employees happy, Crescent has found a way to zero in on the needs of its customers, too. When the company decided to expand into the air conditioning and refrigeration market, Cosmo and his partner at the time came to a disagreement. Clarence thought it was a bad move that would cost the company (he was convinced indoor air conditioning was only a passing fad). Cosmo argued that if they didn’t, the cost would be greater. He listened to the market and knew there was a need, and his persistence proved to be beneficial. That mentality has served the business very well over the years.

“We listen to our customers,” George Jr. says. “We pay attention to where there are needs and look for gaps we can fill. It’s about being strategic and taking risks.”

George Jr. continues to look for ways to give Crescent the competitive edge, even if it means making big changes. “The industry is changing, so we need to change with it,” George Jr. says. In the last ten years, he has made big investments in database technology and an easy-to-use online store, which allows Crescent’s customers to order the quality parts and equipment they need in just minutes, from anywhere in the world.

He’s also changed the way the company recruits new talent, which has proven to be challenging at times. “It used to be that you’d have 10 open positions and 100 applicants,” he says. “These days, you can have 100 open positions and only 10 applicants. It’s a different world.” Crescent is using technology to help in its recruitment, onboarding, and retention efforts, but true to form, the human touch is not forgotten. “We have a company-wide lunch on the first day of any new employee’s start. We want to let them know how welcomed they are,” George Jr. says. “When you find a good one, you want to keep them, and you want to let them know they are appreciated.”

George Jr. knows that making strong connections—whether with his employees or with industry-wide professionals—is an avenue to success. “When my father and grandfather first delved into a new market, they knew that being part of industry associations was paramount,” he says. Getting in front of the right people at the right time proved to be challenging, but that didn’t stop them. They persisted and proved that they too, a new up-and-coming HVACR wholesaler, deserved a seat at the table, a hand to shake, and an opportunity to belong.

Crescent has been a HARDI member for nearly 50 years, and it’s paid off in big ways. “It plays a critical role in our success,” George Jr. says. “Beyond just gaining knowledge and an understanding of industry best practices, whether employment or management or whatever else, it’s an opportunity to interact with individuals who know exactly what you’re up against and they’re willing to talk to you and share their experience. I can’t overstate how critical it is, the peer-to-peer networking—to me, that’s the number one reason to be a part of an organization like HARDI.”

George Jr. knows all too well how important it is to foster those relationships. “I can think of a dozen instances where I’ve had a question come to mind, or a problem I needed to solve, and I’ve been able to contact someone I’ve met through HARDI and get their assistance. Those connections, those relationships, are invaluable.”

So, under the leadership of George Jr. and through a company culture that fosters relationships, focuses on employees, and puts the priority on customer satisfaction, Crescent ushers in its 75th anniversary this year. “We’re a larger business than I ever thought we would be,” George Jr. says. “We have 19 locations and 150 employees. If 30 years ago you would have told me that I’d be overseeing a business of this size, I wouldn’t have believed you.”

Currently, the wholesale distributer stocks an impressive product line, including American Standard, Emerson, Honeywell, Johnson Controls, Aprilaire, Sporlan, Mitsubishi Electric, White Rodgers, Chemours, and Nest, to name just a few. “But we’re more than just our product line,” George Jr. says. “We pride ourselves on providing outstanding customer service and industry expertise from the second you walk in the door or tap on the computer screen.”

George Jr. stresses again that everyone who works for Crescent is treated like family. “When everything is in order and going well,” he says, “then it’s like a Thanksgiving dinner 365 days a year.”

Throughout the year, Crescent has held small occasions celebrating 75 years of business. “We’ve had events where we just get together and have a meal,” George Jr. says. “We hosted a Family Day in October where employees brought their significant others and kids and we just had a good time. The big celebration will be held at the beginning of next year, when we hold our annual holiday party.”

As for his vision for the next chapter, George Jr. says, “For our customers, I want them to know that we will always respect their choice to buy from us. We will always do a good job in earning their loyalty. For our vendors, we will continue to work hard to respect their time and their priorities and bring their wants and needs together with our wants and needs to get a cohesive plan to get their products into the market.”

There isn’t currently a fourth generation in line to keep the family-owned business going, but that doesn’t mean the Crescent name or culture of values will be forgotten. George Jr. is considering options in terms of what the next game plan is, but for now, he says, “We will remain consistent with focusing on our employees and our customers. If I continue to have happy employees, then I will continue to have happy customers, and my father’s and grandfather’s vision will continue to live on in Crescent.”