Comfort and energy savings are just a few features. 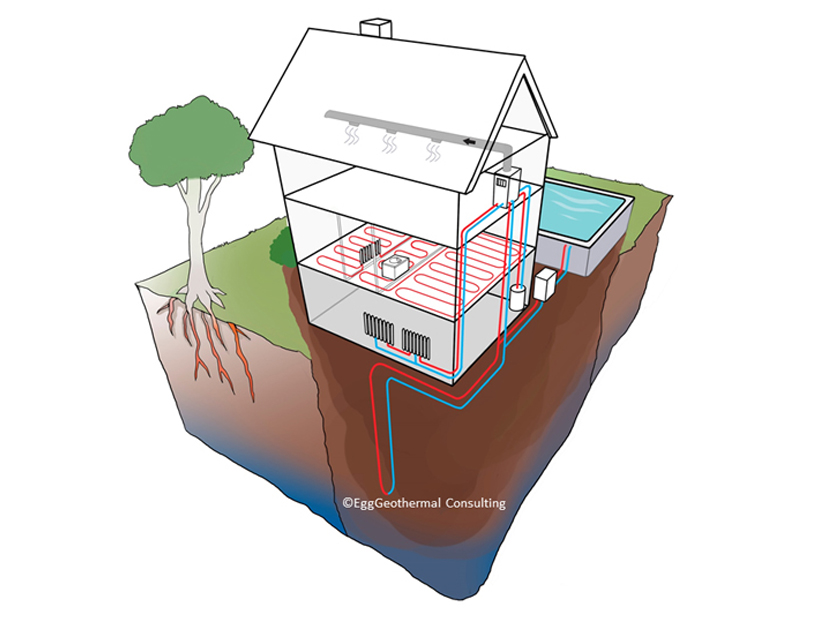 Many people are confused about the energy consumption of hydronic heat transfer around the building when compared with refrigerant transport of energy. While that is an important subject, it’s not actually the focus of this particular piece. This column is focusing on heating and cooling trends that are gaining popularity. Room radiators and in-floor radiant heating has been around for quite some time. There is not a more comfortable form of heating of which I am aware, especially when compared to convection, or a forced-air heating system. In addition to the comfort levels provided to the spaces in which radiant in-floor heating is installed, the energy efficiency is superior to forced air systems, as well as high-temperature radiator style systems.

The missing link, and the most difficult for many to adopt in the industry is that of radiant cooling technology. I first observed a radiant cooling system in 1992. It was in Clearwater Beach, Florida, at the home of a dentist. He had geothermal heating and cooling through the use of geothermal water-to-water heat pumps strategically around his beachfront home.

As a young mechanical professional, I was more than a little surprised to walk around his beautiful home and hear no air movement whatsoever. On this hot summer afternoon, the house was extraordinarily comfortable with the exception of the particular zone that was non-operational. After some investigation, I discovered a 1-inch by 10-inch rough-cut cedar valence (similar to the image) that was installed around the perimeter of each room at a height of eight feet above the finished floor. Under the 1-foot finned tube running behind the valence was a condensate gutter or drain that collected the condensation from the 40 F chilled water pipe and channeled the condensate outside. Though this was a remarkably ingenious system, I could see that it was not easily applicable to every situation and could potentially be expensive, even messy. 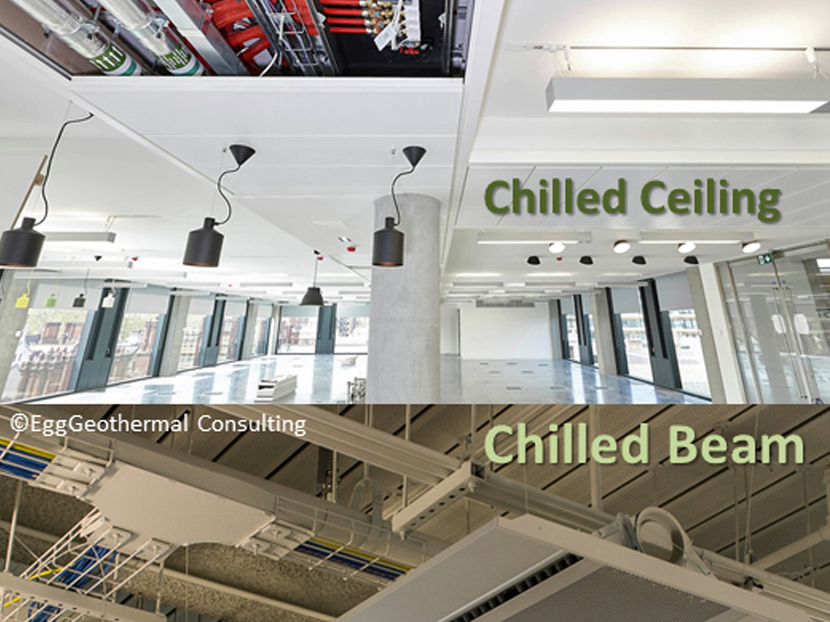 Many of us have heard of or seen “chilled-beam cooling.”  Chilled-beam and radiant-panel cooling are similar in many ways. Challenges include the precise control of the chilled water such that it stays above the dew-point temperature. Much like many other technologically difficulties from years and decades past, this has been solved by modern technology and the reasonable application flow and temperature control. As you can see in the diagrams, the temperature of the chilled water is controlled in chilled beams and chilled ceilings very easily using an injection mixing block and a pair of pumps. These microprocessor-controlled pumps are part of a system that carefully monitors the relative humidity, the associated dew point,and keeps the chilled water lines at a temperature that guarantees safe delivery of radiant cooling to the occupants. 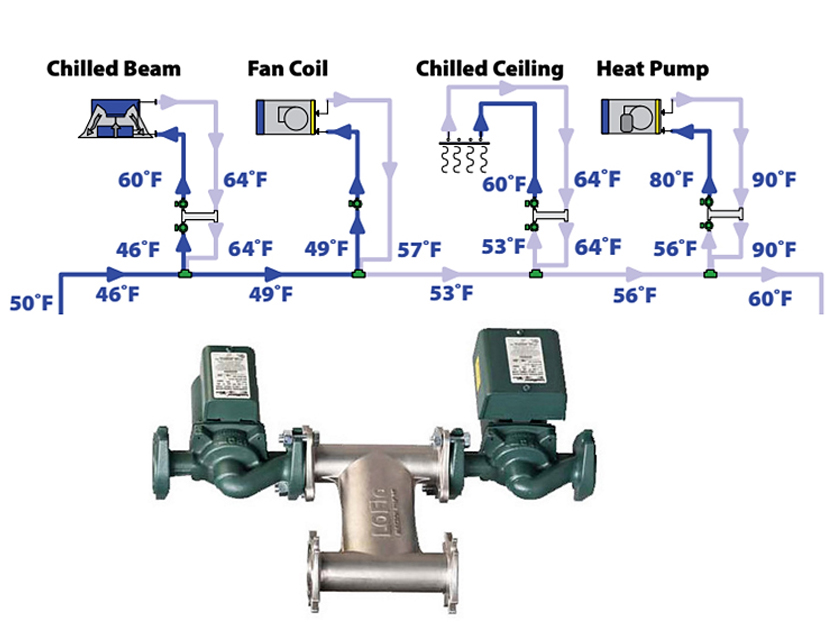 Of course, fresh air is a necessity in these buildings and can be supplied in any number of methods. Larger buildings use dedicated outdoor air systems, smaller ones can use exhaust recovery ventilators of many different varieties and types. It's important not only for ventilation loads to be managed but also CO2 concentrations, and relative humidity must be removed from the air in another fashion.

Active chilled beams handle this effectively because they are supplied with a requisite amount of fresh air that is already been sufficiently dehydrated through the HVAC systems handling the requisite ventilation air. Passive chilled beams and chilled ceilings require other forms of ventilation that manages the relative humidity of the spaces.

The “point” of hydronic cooling and heating

Here is the point: as far as energy efficiency, comfort, noise levels and reduction in construction space requirements and cost, nothing beats radiant systems. Air distribution systems take up more space and can end up more costly, all things considered. The increase in overall comfort and satisfaction provided by chilled-beams comes as a result of decreases in noise, draft conditions and temperature inconsistencies. Typical air distribution systems may produce sound levels in the range of NC 35-40 while chilled beam systems operate with sound levels less than 20 NC.

Taking a look at the comparison graph, you can see represented the cooling load or compressor load, whether it be from a chiller or another source will be generally the same. However the power expended for distribution fan operation is significantly reduced, saving a remarkable amount of energy in distribution consumption. Pumping power is increased a little bit because nearly all of the distribution is being completed through hydronic pumping of BTUs to the areas where cooling and heating is needed. 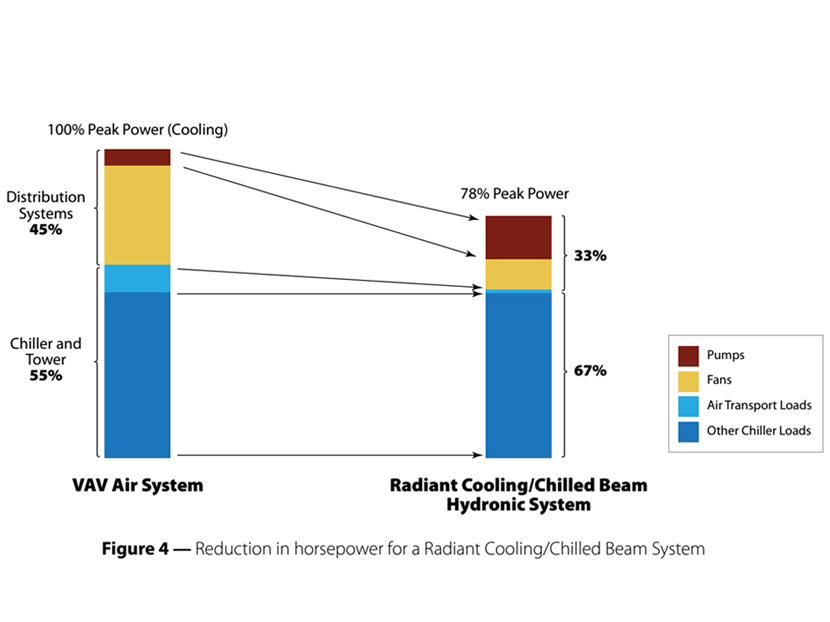 Hydronic or radiant cooling truly shines in the area of creature comforts. It is dead silent, drafts from forced air cooling are all but eliminated and temperature swing is no longer an issue. This creates a comfort level that must be experienced to appreciate it. The ambiance of a home or office is improved dramatically.

To learn thermal heating and cooling and how it is changing the HVAC landscape, check with the International Ground Source Heat Pump Association (IGSHPA) or your local geothermal chapter. IGSHPA has CEU courses for all professionals, including a new course entitled, “Introduction to Geo Thermal Systems Technology.”  This course begins with the basics of HVAC and heat transfer and moves comfortably into the application of geothermal heating and cooling systems of all kinds. Get trained and certified and put geothermal accreditation to work for you!

Jay Egg is a geothermal consultant, writer, and the owner of EggGeothermal. He has co-authored two textbooks on geothermal HVAC systems published by McGraw-Hill Professional. He can be reached at jayegg.geo@gmail.com

T&S Is Helping Stop The Spread Of Germs