As our water infrastructure continues to deteriorate, investing in water conservation and reuse projects makes financial and environmental sense.

Do you remember the field trips when you were a child at school? Amazing places, funny accidents among your classmates, lessons learned that you have never forgotten? These events were fun and different from everyday mundane classes, and because we were young, an exciting sense of wonder came with discovering some ideas for the first time.

Those memories stay with us all our lives. And they sometimes shape the way we view the world.

At the Hitchcock Center for the Environment in Amherst, Mass., if it rains on field trip day, it’s fantastic. The kids get to see with their own eyes just how much water can be collected from the roof of a building in just a few minutes as it flows into transparent tanks in the middle of the facility.

For me personally, the pandemic has driven home the idea that we should rethink the simple basics of life. Anything can be here today and gone tomorrow. We should perhaps place a higher value on family, field trips, school and how we spend our time. We should be thankful for our homes, jobs, food and water. As we look ahead, water is becoming a key issue.

In April, President Joe Biden announced that he would ask Congress to allocate billions of dollars to accelerate the process of replacing lead pipe used for America’s drinking water. As we reported in 2019, the current pace of replacements is far too slow to make the needed impact.

In some cities, the municipality only replaces from the water main to the property line because its program budget is already stretched thin. Obviously, this doesn’t do the job unless the homeowner can afford to pay for the remainder of the line. Let’s see if Washington can help with those costs.

Hardly a day goes by without a news report from somewhere in the country about algae blooms, agriculture runoff, industrial pollution of freshwater resources or human damage to our oceans and natural ecosystems. So it’s not surprising that we have frequently covered the increasing cost and regulation of drain water, sewage water and storm water exiting properties in urban and rural settings through sewers, septic and other kinds of infrastructure.

Authorities are struggling to protect our health, our planet, our natural and tourism resources, and our economies by maintaining the quality of water coming out of faucets and into local aquifers and waterbodies. We might think of reusing rainwater or treating greywater as quaint, aspirational or insignificant, but increasingly, it is not.

The Edith Green-Wendell Wyatt Federal Building is an 18-story, 512,474-square-foot office tower located in downtown Portland, Ore. It was built originally in 1974 and renovated about five years ago. Mechanical, electrical, data, fire and life safety systems were all upgraded. A deep energy retrofit included building envelope improvements and solar panels on a 13,000-square-foot roof.

The panels had to be angled to optimize their yield from the sun, and mechanical designers realized this would be ideal for capturing rainwater. Beneath the building, there was an unused rifle range, which is now home to a 165,000-gallon rain catchment tank. 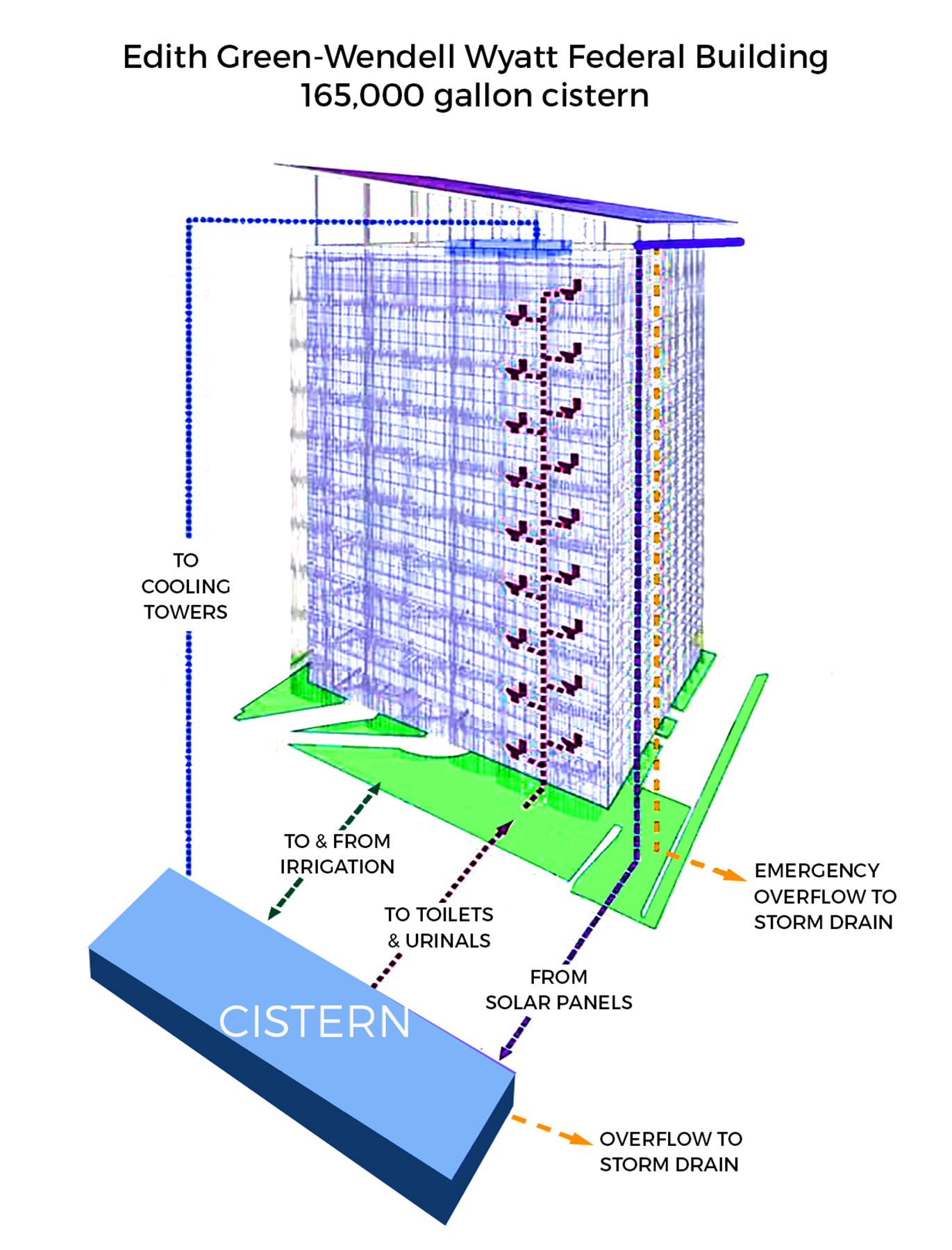 The system created dramatic cost savings and reduced the building’s environmental impact. Total water collection is about 626,500 gallons each year, or 85 percent of the building’s water requirement. And that’s just one office building.

In Texas, one elementary school is saving about 500,000 gallons each year by collecting rainfall from its 45,000 square feet of rooftops. The water is collected in two 15,000-gallon cisterns for bathrooms and one 12,000-gallon cistern for watering the school’s landscape.

Rainwater is collected in a cistern in the basement of Seattle’s Bullitt Center, a six-story, 52,000-square-foot building that serves as the home office for the Living Building Challenge, founded by renowned environmentalist and Earth Day founder Denis Hayes. Among other uses, rainwater is purified on-site for drinking.

After collection, the rainwater is filtered and passed through an ultra-violet disinfection system and then used in water-efficient plumbing fixtures in bathroom sink faucets, showers and kitchenettes. Rainwater intended for foam-flush toilets and irrigation is filtered but not disinfected.

The tank can hold more than 50,000 gallons, which is enough for four to six weeks of operation. Designers worked with the city in order to invent and receive a municipal permit for drinking rainwater.

“I think it’s likely we will move toward rainwater for consumption in many places,” says Mark Girgenti, director of design engineering for Burt Process Equipment in Hamden, Conn. He points out that it is not yet permitted in most parts of the United States, but the technology to do it safely is completely proven.

“As governments get more involved in buildings and expect them to be greener, it’s probably inevitable and it will become a cost of doing business, as it were,” he notes. “All the costs associated with water are going up. In Massachusetts, you have to pay even to discharge reject water from reverse osmosis.”

Girgenti describes a few pharmaceutical production projects, one in Massachusetts and one in Wisconsin. In the former case, the plan was to collect rainwater from the roof, filter/disinfect and use it in lab operations. “They were also going to use it for flushing, but the volume for the lab was considerable, something like 5 to 6 gallons per minute,” he says. “So they used condensate collection for the toilets instead.”

In the Wisconsin project, a purpose-built collection pond was created. It was fed by rooftop rainwater collection and some hardscape areas as well. Girgenti says that pharma plants use a lot of water, primarily for cooling towers and sterilizing equipment.

“Rainwater is better for cooling towers than city water because it contains lower total dissolved solids; like 20-80 compared to hundreds in city water,” he explains.

Girgenti mentions some very large projects in Mexico for which his company supplied collection tanks with capacities in the hundreds of thousands of gallons. “In Mexico, they use the rainwater in the process operations for beverage products,” he notes.

The Hitchcock Center in Massachusetts

Meanwhile, back at the Hitchcock Center, which is field trip central in nonpandemic times, kids marvel at the rainwater system and crack poop jokes as they tour the basement and peer into the compost tanks used to collect the yucky stuff.

“In summer, they make mud castles using rainwater from the outdoor barrel,” says Jessica Schultz, the center’s communications director and Living Building coordinator. “Everything is very visible and fun, so it makes it easy for kids and visiting adult groups to learn about our water cycle, water treatment systems and composting.

In addition to the rainwater display tanks, a 6,000-gallon underground reservoir stores raw water for building use. Schultz says the average usage is about 35 gallons per day, so if the tank is full, it contains about a six-month supply.

Collected water is piped into the building’s basement, where it is treated with a series of progressively smaller filters and UV light. The facility is designed to harvest rainwater to serve 100 percent of its domestic water needs and to return 100 percent of its wastewater into the aquifer.

Schultz says the foam-flush toilets use about 3 ounces of water per flush and a small amount of blackwater liquid is removed by a maintenance service every three months. It undertakes several system checks and also manages the solid compost.

“The compost is surprisingly not very stinky,” says the center’s architect Sam Batchelor, a partner at designLAB in Boston. “The Hitchcock Center has an education mandate, so we came up with the idea of the transparent tanks. But no one had ever done it, so I bought one for my own house as a sort of demonstration before we installed them at Hitchcock.”

The firm also created a red light/green light system to allow fresh air in the building.

“They wanted to use natural ventilation in the warmer months, but they didn’t want everything to be automated because they like to promote the idea that ordinary people have a role to play in protecting our environment,” he explains. “So, we created a red-light warning that comes on when the ventilation system is going to shut down because it’s warm enough for humans to manually open the windows.”

In addition to environment-friendly water systems, the building includes numerous other features that have allowed it to meet the most demanding certification program requirements on the planet, the Living Building Challenge.

He notes that the building is about 9,000 square feet in climate zone 5A (where temps can get as low as -20 F). It has a superior building envelope so heating and cooling are accomplished with just one 12-ton and one 8-ton Mitsubishi outdoor heat pump unit, which serve four small indoor heads.

Ventilation and humidity are managed by a 1,600 cubic feet/minute RenewAire energy recovery ventilator, plus a second one at 900 cfm. Actual energy use is 23.9 kBTU/square foot, well below the original target of 30 kBTU/square foot. The solar panels generate 66,500 kWh.

“For the Living Building Challenge, you have to achieve zero water,” Swift explains. “To do this, you need to reuse or infiltrate stormwater on-site, reuse all greywater, and reuse all blackwater or use composting toilets.”

At the Hitchcock Center, greywater from five sinks goes into a separate holding tank at the front of the building and is gravity-fed into a constructed wetland in the landscape. It mimics the biological processes occurring in natural wetlands.

“Much of the greywater is dissipated through evapotranspiration from the constructed wetland,” he says. “Any remaining water that has been filtered by the wetland is pumped to a leaching field for absorption into the ground. The volume of water entering and leaving the wetland is monitored to track how much of the building’s greywater is returned to the environment through each process.”

For stormwater management, meadow vegetation is used to minimize runoff, diverting a portion of roof runoff for use as a water source for the building. “Nearly all site runoff is captured in a series of rain gardens that allow for infiltration to groundwater,” Swift notes.

Why Do These Water Systems Matter?

In addition to the 6 million to 10 million lead service lines that President Biden would like to see replaced, officials in almost every state believe sewer pipe and other water infrastructure are critically failing. They are not being replaced quickly enough, even under a business-as-usual scenario.

And as we are all learning, business as usual is fading. Any insurance company can confirm that there are far more land floods in the United States each year than ever before. A 2018 study published in the journal Environmental Research Letters by scientists in Bristol, United Kingdom, Minneapolis and Washington reports that about 41 million U.S. residents are now at risk from flooding.

Floods can quickly overwhelm and further damage hundred-year-old storm and sewage infrastructure and contaminate drinking water. The worst floods kill animals and spread rotting carcasses into unusual places and into bodies of water, increasing the transmission of a host of troublesome diseases.

The last thing we need right now are more troublesome diseases, so if we can improve our water management, we should do it.

Water is a simple basic necessity for life. Our kids are learning to value and protect water on their field trips, and they hope their parents are doing the same.

Let’s ramp up implementation of better water systems, enhance careers, save money and preserve that exciting sense of wonder for kids who are discovering, for the first time, some of the ways we can, indeed, build a better world.