Plumbing Systems: A World Away

Codes and standards set us apart as it relates to health and safety.

Over the last 10 months, I have traveled to many parts of the world, including Africa, Iceland, India, Las Vegas, Mexico, Halifax, Nova Scotia, Canada, Florida, Puerto Rico and Alaska. In each part of the world, I have seen many different plumbing fixtures, materials, systems and construction methods.

My travels started shortly after the ASPE Convention in Phoenix and the ASSE Annual meeting in Las Vegas earlier this year. In mid-November, I traveled from the hotels of Las Vegas to the villages of Ghana, Africa for almost a month on a Rotary International mission trip with 22 Rotarians from District 6400 in the U.S. and Canada.

Sanitation is lacking in the region where we went. The majority of the water sources had become contaminated with waste and poisonous residue from upstream villages and nearby hydraulic mining operations.

Two of the villages we worked in had schools that were in very poor condition. They had no electricity or plumbing, dirt floors, a wooden slate fence for walls and a thatch roof.  For a toilet facility behind the school, they had a small, two-room concrete wall, about five feet high, with no roof and a partial concrete floor sloped to a hole that drained out one end, and a hole to stand over for doing your business. There was no water or paper.

We renovated two school buildings, adding concrete floors and block walls, roof trusses and sheet metal roofs. There was still no electricity or lighting in the classrooms, so the walls only went up two-thirds of the way to let in light. These were very remote villages without any utilities.

While we were there, we drilled three water wells and built three water towers with several water faucets for gathering clean water for cooking, cleaning and drinking in communities that had water quality issues. Windmills, or hand pumps, were used to bring water up from the wells.

In addition to the two schools and three water wells, we constructed a central toilet facility/sanitation building near the school in the center of the village of Nyankomasi.  The sanitation facility had 12 water closets, four showers and four hand-washing stations. The drainage was connected to a large septic system, and a septic field was installed. 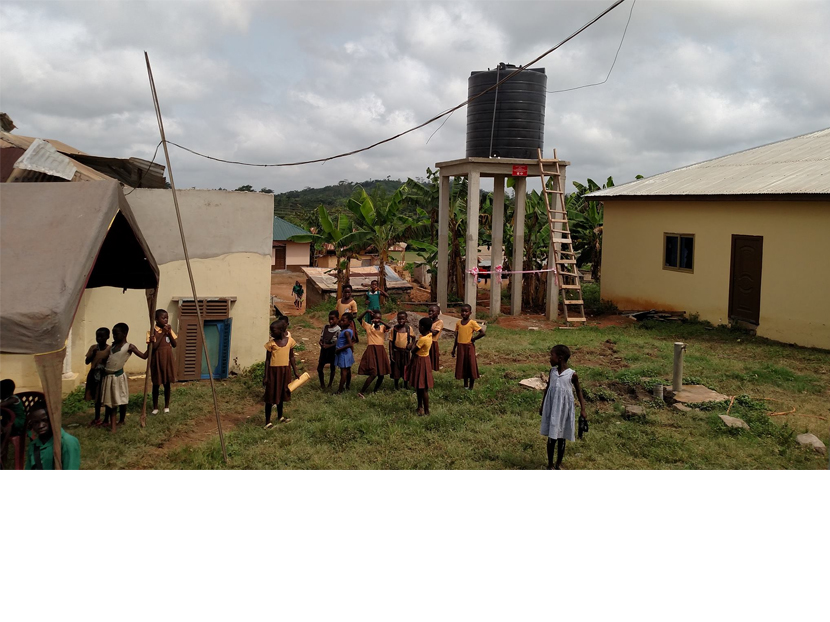 We also provided job skills training, distributed mosquito nets and provided backpacks with clothes, school uniforms and textbooks to 500 grade school children. They planned a gathering of the entire village where we gave the children their backpacks, and they performed native dances for us to the beat of many drummers. We had several team members that provided medical and dental services, and eye exams for distribution of reading glasses. Our goal was to go there and care for them while teaching them about health and safety and how proper plumbing and sanitation could save many lives.

There weren’t any building or plumbing codes or building inspections. So, it was an interesting experience. We stayed in a new hotel and the stairs to the second floor had a different height for each step. That took a while to get used to. It really made me appreciate the codes and standards organizations we have in the U.S. that provide a minimum level of health, safety and construction standards for buildings. Most of the population that lives in that Assin-Beraku region of Ghana, live at poverty levels. Most are subsistence  farmers, growing cocoa crops; five percent are traders who work the streets trading goods and commodities, and around three percent are government workers.

There is little access to potable water. Malaria is Africa’s number one killer. Window screens are lacking; anti-malarial medications are expensive. A vaccine doesn’t exist to prevent malaria. However, it can be stopped with a simple device known as an insecticide-treated mosquito bed net that provides an effective barrier to preventing the transmission of this fatal disease. The mosquito nets that we distributed were large enough for several people to sleep under one tented net.

We purchased and provided many water filters for remote areas. These filters were a means of transforming contaminated water into potable drinking water, and they were distributed to areas where people were not close to safe, clean drinking water wells.

The lack of sanitation results in many cases of diarrhea and other waterborne diseases. This lack of sanitation and dysentery kills more children than AIDS, malaria, and measles combined, leading to the staggering rate of a child dying on average about every 21 seconds in Africa. A major plumbing manufacturer in the U.S. made posters many years ago that featured a plumber and read: “The Plumber Protects the Health of the Nation.” It is evident that clean water and sanitary drainage systems can significantly improve the health of many people in developing nations.

Each year in November, Rotary has a group go to Ghana on a mission trip to help with similar projects for different villages each year. If you would like to help or contribute, contact me.

Many homes in Reykjavik do not have a water heater or boiler to heat the homes. They receive hot water from the municipal hot water system and use it for heat and to mix with cold water for bathing, washing and showering purposes. Most homes receiving the hot water have water injection wells where the used hot water is injected into the ground after it is used.

I was recently invited to speak at two different conferences in India. One was a presentation on “High-Rise Building Plumbing Systems” for the Indian Plumbing Association where I was named Fellow member of the IPA, and the other was a presentation on “High-Rise Building Fire Suppression Design Considerations” for the Fire and Security Association of India.

In India, I worked with a very large MEP consulting engineering firm. It had more than 100 buildings currently under construction and has about 154 buildings in various stages of design. Most of these construction projects were for major developers building self-contained facilities like small cities that had shopping, entertainment, housing and office space all in one project for U.S. and British companies doing business in India. Most of these projects were in excess of 1 million square feet, and some projects including a hospital were in excess of 16 million square feet of construction.

I toured many of the projects currently under construction and noted many different construction techniques that seemed to work well in their applications. Many of the high-rise buildings were reinforced concrete construction. Many water and waste pipes were run in channels that were formed in the concrete walls or suspended below floors. The water and waste pipes in the walls were grouted over and embedded in the walls. Most lavatories were routed as indirect waste lines to floor drains that had side inlets to accept multiple lavatory drains.

I was given the opportunity to review of the National Plumbing Code of India, which allows several types of plumbing drainage systems. The National Building code of India, which includes a part 9, covering plumbing system installations, had many illustrations that showed multiple branch vents and relief vents connecting below the flood rim of the fixtures being served. I pointed out the problems with allowing this piping configuration. (If the drain is blocked, the waste will flow down the vent pipe without backing up into the fixture, which would indicate a problem.) They said they will be working to make changes to the National Building Code of India plumbing sections to address those issues. I pointed out that most of those issues are covered in another plumbing code developed by IAPMO for India. They were going to look into that code also. 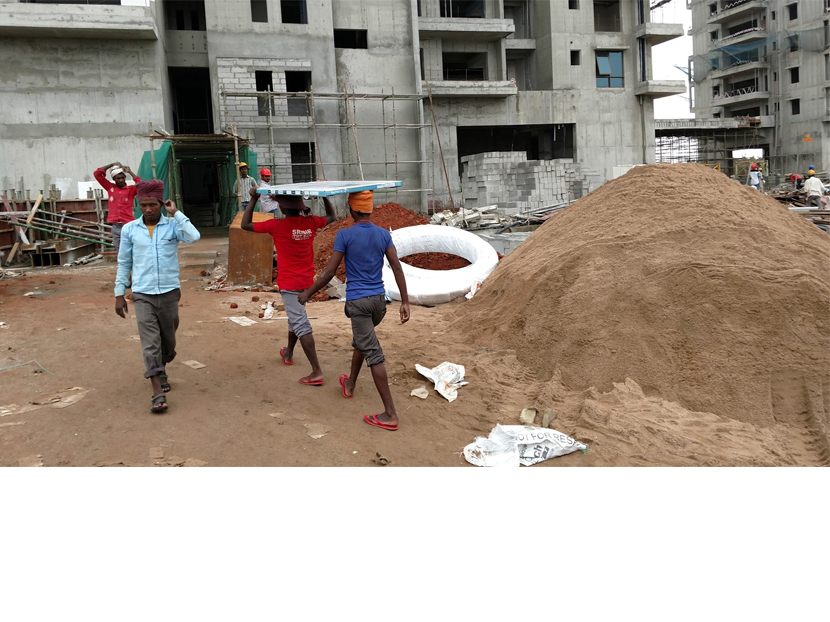 Lavatories and shower drains were routed to a gray water waste drainage system. Toilets and kitchen sinks were routed to black water waste systems. There are not many water and sewer waste systems in India, so most buildings are completely self-contained and have waste water treatment and recycling systems for flushing toilets. Some of the self-contained wastewater recycling plants rivaled some small to medium municipal wastewater treatment plants in size and capacity.

There were more buildings under construction than I had ever seen anywhere, yet there are only a handful of inspectors for the whole country. I was told construction inspection is mostly the responsibility of the design professionals, who inspect construction sites to assure the construction complies with the drawings and specifications.

The only issue brought up during the conference was a reversal of a code change that was intended to allow a 1-1/2-inch drain for a shower in a retrofit application where a bathtub is allowed to have a 1-1/2-inch drain, and the code calls for a minimum 2-inch size for a shower drain. The history of discussions and reasons for the difference in sizes from two different fixtures that are served by a shower head has to do with the head pressure that is available for the drain on a bathtub versus a roll-in handicapped shower that cannot develop much head pressure.

As the population ages, fixture manufacturers are getting more requests for walk-in tubs or shower stalls that fit into the space that formerly had a bathtub. It seems the disabled and elderly population prefers walking or rolling into a shower as opposed to stepping over the side of a bathtub. An existing bathtub is allowed to have a 1-1/2-inch drain, where the shower requires a 2-inch drain. During the last code cycle, there was an exception allowing 1-1/2-inch shower drains. This was reversed at the hearings in Anchorage and will now be prohibited in the 2018 Uniform Plumbing Code.

The American Society of Heating, Refrigeration and Air Conditioning Engineers (ASHRAE) Annual meeting and Expo will be held in Chicago Jan. 20-22, 2018. During this meeting, the ASHRAE standards committees and technical committees meet to move forward on many projects including the standard 188 Legionellosis: Risk Management for Building Water Systems, and work on an update to ASHRAE Guideline 12, which also addresses Legionella control on building water systems and will be a complimentary document to the ASHRAE 188 document. Plan your trip to the conference at www.ashrae.org