Facility built to teach the next generation of plumbers green building techniques and traditional skills.

Looking more like the headquarters of a trendy tech company, the three-story building gives its purpose away upon closer inspection. The center’s façade, for example, is clad in anodized copper with black horizontal ribbing on its north side that looks like stacked pipe.

Inside, there’s no doubt that the center was built to train the next generation of plumbers in the latest environmental techniques.

A mechanical room, made even more visible off the lobby by floor-to-ceiling glass, highlights the building’s rainwater harvesting and grey water reclamation systems.

“Every mechanical room is meant to be a classroom, too,” says James James M. Majerowicz, CPD/GPD, training director for the union.

From the top of the building’s green roof, rainwater travels a few stories through the downspout piping and into a 380-micron vortex filter before it’s stored in a 10,000-gallon underground concrete cistern. Then, the water is pumped through two more filters and stored in a 3,500-gallon tank.

The harvested rainwater supplies the water needed for classroom instruction as well as flushes toilets and urinals in the restrooms.

And even some of those restrooms serve as unorthodox classrooms. In six restrooms, for example, the plumbing and tempering valves are deliberately left exposed. The hot and cold water handles are simple valves.

In addition, a greywater reclamation system takes water from drinking fountains, showers and wash sinks, and passes it through multiple filtration devices, including UV light. Afterward, the water is used for subsurface irrigation of the building’s landscaping.

Another specious mechanical room on the top floor highlights the use of an evacuated tube, drain-back solar thermal collector on the roof that provides the building’s domestic hot water.

The center also includes the more typical classrooms, albeit ones plumbed for wet course work with drains in floors lined in watertight epoxy.

“We’re teaching plumbing,” says Craig Thomas, co-chair of the union’s training fund and owner of Warren Thomas Plumbing, Westmont, Illinois, “so there’s going to be water on the floor.”

The first two we visited were set up for drawing and reading blueprints and other schematics. One was old school with T-squares and other traditional hand-held measurement and alignment tools, while the other featured 20 computer workstations for mastering CAD.

We also visited a water heater classroom with 11 tank-type units; a residential/light commercial room featuring common fixtures and appliances; a backflow prevention room; and a hard-to-name room with shower valves, flush valves and faucets. All the classrooms are a roomy 30 feet by 30 feet, with the exception of the water heater space, which is twice the size.

A multipurpose room that can accommodate 200 people could function as one more classroom. However, with an adjoining patio overlooking some of the green roof along with views of Willis Tower, the John Hancock Center and the United Center, this looks more like a party room to us. When the building was still being designed, the architect even went so far as to stand on a hoist at the height the room and patio would be built to make sure the views would be the best.

On the ground floor, a “hot work” lab with 20 booths for welding, cutting, soldering and brazing prepare students for various aspects of jobsite conditions.

Finally, a three-story workshop includes environments meant to replicate real world conditions that plumbers would expect to face in the field such as multistory, wood- and aluminum-framed residential and commercial construction.

A large underground pit filled with stone will teach apprentices how to dig through rock beds to install pipe. The high ceiling allows space for a three-ton crane so apprentices can also learn how to rig properly. 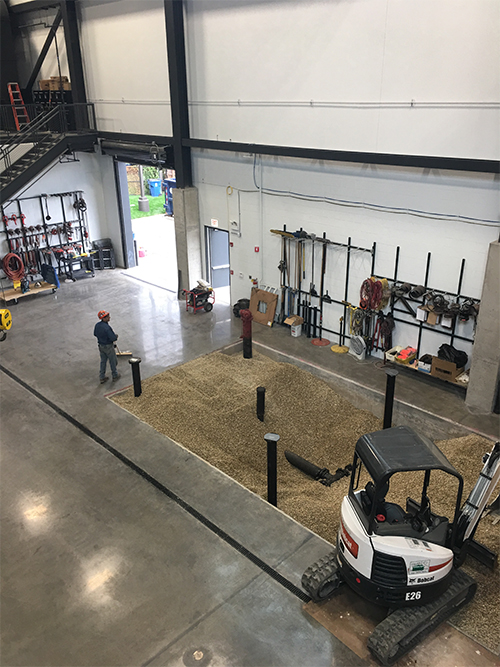 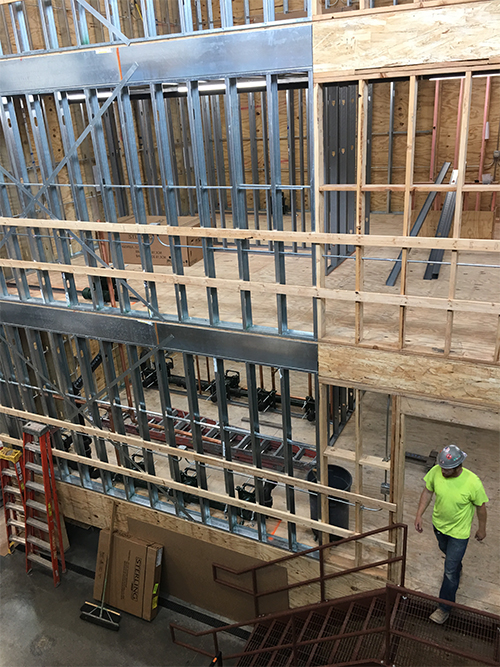 The local broke ground for the facility in June 2016 following the teardown of an old insurance building that had served as the former training center and administrative offices.

The training center will serve the union’s 4,000 journeymen and apprentice plumbers, which makes it the largest plumbers union in the United States.

According to the union, apprenticeships have increased by 400 students over the past three years, with 20 women currently enrolled in the program. Three new instructors have been hired to keep up with the increases in enrollment.