Business pours in for the rainwater industry.

“Into each life some rain must fall,” wrote Henry Longfellow in 1842 in a simple and melancholic poem. He may not have realized that within 200 years, in many parts of the world we are now either thankful for rainfall when we can get it, or struggling with torrential downfalls. Increasingly we are learning to employ sophisticated technologies designed for a chaotic world of water management.

From Legionella in New York to lead contamination in Flint, to flooding in Miami and water rights battles along the shores of the Colorado River, the rules for water in North America can now be a matter of life and death, not to mention prosperity, successful agriculture, and quality of life in cities.

The Government Accountability Office reports that 40 of 50 state water managers expect shortages in the next 10 years (2013-2023).

“I’ll bet anyone $1,000 in any city in North America that your water rates and stormwater costs are going up a lot, and I’ll win all those bets and retire early,” says David Crawford, founder of Rainwater Management Solutions (RMS) in Salem, Virginia. “These costs are both multiplying in leaps in bounds because billions must be spent by our governments on infrastructure.”

In December, Reuters reported that about 3,000 other places in the U.S. have much higher lead contamination in drinking water than Flint, Michigan. In 2015, The Atlantic said there are 772 urban communities with crumbling sewer infrastructure that needs upgrading. It said the EPA reports that up to 75,000 overflows send untreated sewage into American waterways every year; by one estimate we need $1 trillion in new water infrastructure.

“In Richmond (Virginia), they charge you a stormwater fee on the basis of how much impervious surface you have — the bigger the area, the higher the fee,” says Crawford. “In Washington D.C., I’ve heard of projects not going forward for just one reason: no stormwater permit. In Atlanta, one customer is paying $110,000 every month for water.”

Anyone planning to build anything might be wondering is there a cheaper, safer way. That’s why manufacturers, engineers and installers of rainwater, grey water and stormwater systems are experiencing booming demand. MARKETSandMARKETS, a research company estimated U.S. market expansion of more than 9 percent annually for the next five years, while industry people hint at even faster recent and future growth rates.

Chris Maxwell-Gaines of Innovative Water Solutions talks about the city of Austin. “They have introduced incentives for using stormwater or rainwater harvesting systems. But water charges have gone up tremendously for everyone.” His company recently designed systems for the Sycamore Springs Elementary School on the western outskirts of the city that will capture rainwater from 45,000 square feet of flat roofs for use in irrigation and for flushing toilets inside the building. The water is collected in two corrugated metal, poly-lined 15,000-gallon cisterns for bathrooms and one 12,000-gallon cistern for watering the landscaping. 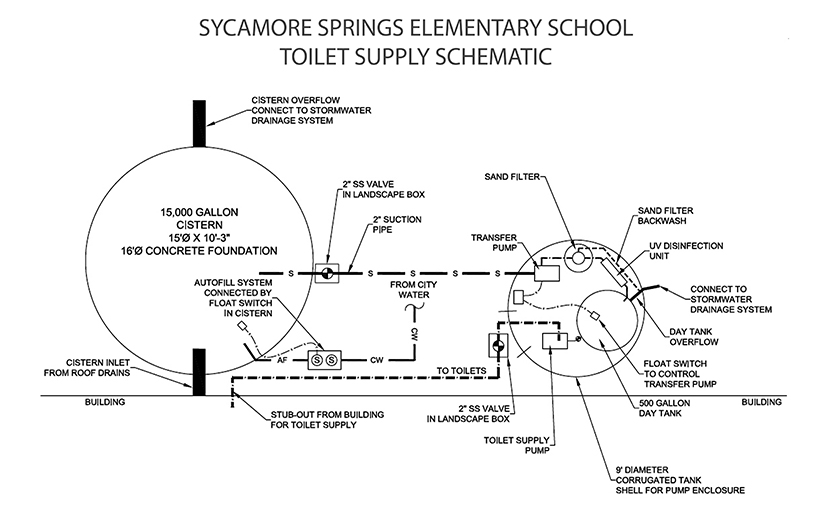 Rainwater is filtered through a backwashing sand filter and a UV light disinfection system, transferred to a 500-gallon poly day tank, then pressurized for supplying toilets. For gardening, it pumps directly from the sand filter and UV to the irrigation plumbing at set intervals during the week. In both cases, an auto-fill feature uses small amounts of municipal water if necessary, so the pumps never run dry.

If 1 inch of rain falls, the system could potentially collect a total of 27,000 gallons of water. The theoretical annual maximum is about 800,000 gallons each year, but, with typical rainfall, Maxwell-Gaines thinks the school will save approximately 500,000 gallons. He estimates savings for the school of about $10,000 each year, if wastewater charges are included.

Crawford’s RMS company designed a grey water system and rainwater system for the new Plumbers Union Local 130 training facility, where all future Chicago-area plumbers will learn about them. “The union wanted to install equipment that not only helped reduce their water footprint, but also served as a learning lab for their students,” says Nate Nickerson of Critical Flow, an RMS technology partner.

For grey water, they consulted with local contractors who installed their Grayworks GW500 system, capable of treating up to 500 gallons a day. It receives water from lavatories and showers within the new facility, treats it and uses it for irrigation outside. Normally, these systems are delivered as one unit that includes biological treatment, filtration, disinfection, project-specific polishing, and online instrumentation; but parts of the enclosure were removed so trainees could see the components.

The system uses a proprietary self-cleaning pre-filter to remove grease, lint and hair. Pollutants are biologically degraded by microorganisms, and pathogens are eliminated by UV disinfection. Dye and chlorine systems can be included as an option. The integral chemical cabinet also accommodates dosing pumps, chemical storage and spill containment.

David Crawford leads RMS and is also the President of the American Rainwater Catchment Systems Association (ARCSA). From 2013 to 2015, this organization worked with the American National Standards Institute (ANSI) and the American Society of Mechanical Engineers (ASME) to develop standards 63 for rainwater catchment and 78 for stormwater harvesting.

According to Crawford, they are still voluntary guidelines, but refined future versions are likely to become law in many regions. These are taught at the Chicago training facility. “We teach them how to quote it, how to sell it, how to install it, and how to make money on it,” Crawford says.

ARCSA Executive Director Heather Kinkade says in addition to developing the standards, the organization produces training materials in English and Spanish, conducts workshops, offers online training and undertakes industry advocacy efforts. It has established a relationship with a third-party organization to administer exams for designers, installers and inspectors of rainwater systems. “Next year we hope to do the same for stormwater professionals,” she says. 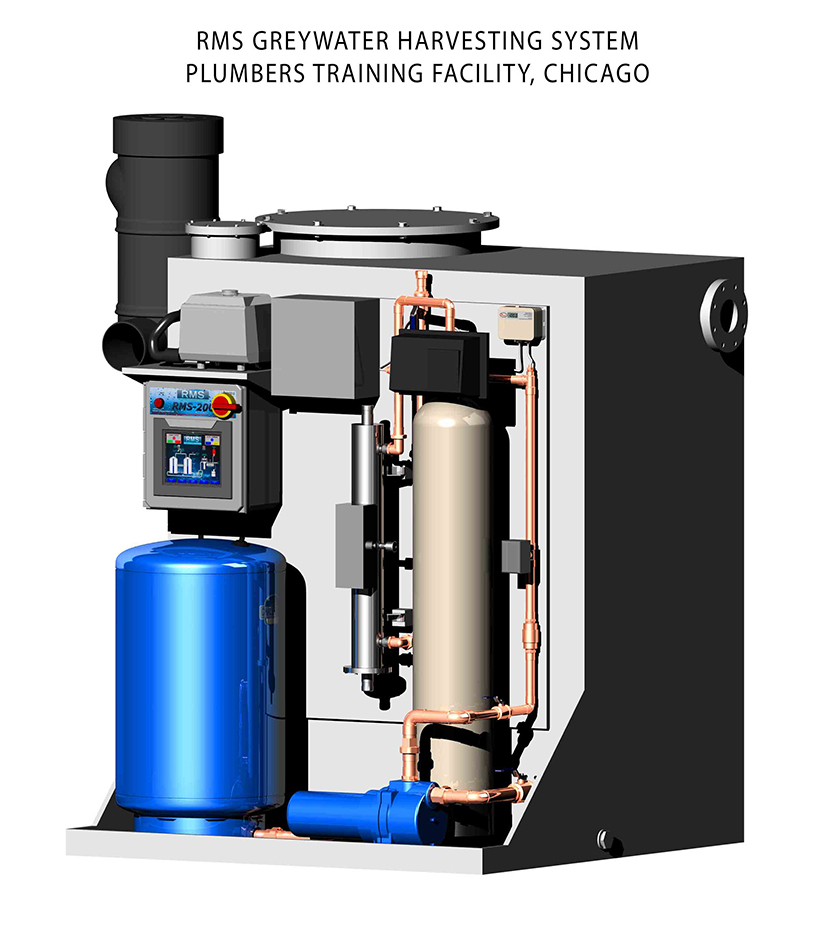 At Bolivar Park in Lakewood, California, stormwater is captured from a nearby watershed of approximately 3,225 acres and pre-filtered into a concrete retention system. It is then filtered, sanitized and pressurized to support irrigation of the 395,000-square-foot parkland. “The park needs about 22,500 gallons each day,” says Stuart Bailin, chief engineer with Wahaso of Hinsdale, Illinois. “A solenoid valve automatically adds municipal water to the system if the cistern runs low.” The system design prevents cross-contamination with the municipal supply.

Water is pre-filtered through a baffle box that screens out particulates larger than 150 microns, because trash, sediment, organic materials and carbons can quickly foul stormwater. Filtered stormwater is then transferred to a below-grade concrete cistern that holds about 400,000 gallons. A 12-inch outlet at the base of the cistern feeds into a 60-inch concrete wet well adjacent to the cistern. The level in the wet well equalizes with the retention cistern.

An overflow in the wet well drains to the stormwater sewers with the help of a 2,500 gpm ejector pump that reduces cistern levels in anticipation of a rain event. “We use a hydrocarbon detector, and if the level is high, we divert water and then monitor system performance on the discharge side, measuring turbidity and pH,” Bailin says. “The nice thing about the turbidity meter is that if the filtration system is not working properly, we know it right away. It’s basically 24-7 online monitoring.”

When there is demand for non-potable water, a drop in the system pressure triggers the main pressurization pumps. Two 20-hp variable frequency drive well pumps provide up to 250 gpm at 80 PSI. A 4-inch pressurized outlet connects to a Schedule 80 PVC line to the treatment system and then to the irrigation inlet. 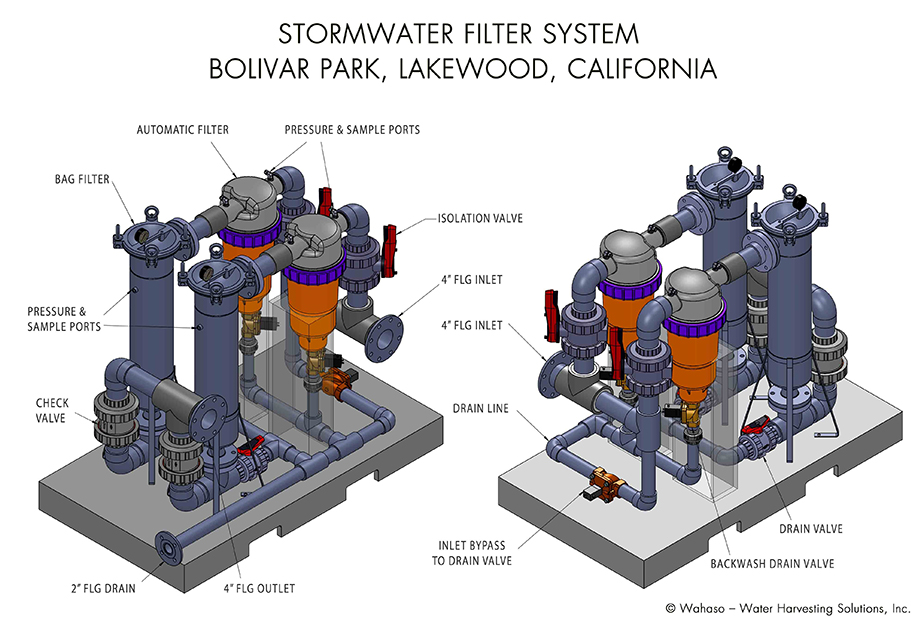 A Wahaso Stormwater Harvesting System (RW-UV250-0) provides treatment that meets Los Angeles County public health guidelines. Water passes through a self-cleaning mechanical filter that removes sediment and particulates down to 50 microns. It then moves through a high-capacity bag filter that removes particulates above 5 microns. Carbon filtration is next, eliminating odors, colors and other dissolved solids. Ultraviolet treatment is the final step; the UV can handle 250 gpm, eliminating coliform and other pathogens with up to five-sigma certainty. If any issues arise with the UV system, an alert is triggered. It can be set so that no additional water is sent to irrigation until the UV unit is repaired.

The system is controlled and monitored via the Wahaso WCS-100, that automatically manages water treatment and municipal water functions and is compatible with building automation systems (BAS). It captures the amount of water available in the cistern, the volume that has been filtered and sanitized, and the municipal water used. It can also incorporate local historical weather data. Analytics, system alerts, and diagnostics are available on site, on the BAS, or via the internet, on remote password-protected dashboards on any device.

According to Alex Argento, of Wahaso sales group Pura Terra, one of the most innovative and perhaps most rewarding water harvesting systems, was installed recently at a casino near Washington D.C. Not only are they capturing rainwater from the roof, but they are also collecting condensate from air conditioning.

“Engineers might not think it’s worth doing, but the ROI is pretty impressive,” Argento says. In this case, they are collecting about 7,800 gallons in sediment-free condensate each day. Also interesting, the harvested water is used for cooling towers, in addition to flushing and irrigation.

The casino’s large size makes for some big numbers. Total demand for irrigation, toilets and cooling towers is about 32 million gallons annually, and they are achieving displacement of about 13 million gallons. Most of it comes from rainwater (87 percent), and the dollar savings translate into a three- to four-year payback on the equipment.

One of the factors that made the business case attractive was that the original engineering for the building included the assumption that a very large cistern would be needed to satisfy local stormwater requirements. The rainwater proposal, although added later in the process, was able to piggyback on this advantage.

Asked about the cooling towers and Legionella, Argento explains that the water from the Wahaso system would meet the NSF 350 standard, and that a rigorous regimen of periodic maintenance is a modern requirement.

The water harvesting trade is stabilizing

Humans have probably always collected rainwater. The Romans built their courtyard-style homes to do just that; but not so long ago in North America, the field may have seemed a bit like the wild west.

Even today, not surprisingly, manufacturers each think their equipment is vastly different and superior, but these case examples demonstrate that certain technological best practices seem to be manifesting themselves. Add to this a healthy outlook for fast-growing demand, improved training and certification; and the water harvesting trade can be described as becoming more stable every day. Engineers and contractors looking for new revenue streams might consider expanding into harvesting rainwater, grey water, and condensate for flushing, irrigation, and cooling towers.

Perhaps it’s not a moment too soon to be welcoming in our approach to rainfall. Centuries ago, Edmund Waller was a little less wistful than Longfellow and possibly more visionary when he wrote: “Vexed sailors cursed the rain, for which poor shepherds prayed in vain.”