Free Subscription
Home » The Rise of the ConTech?
Feature

The Rise of the ConTech?

Since then, mechanical contractors have more technology options and solutions than ever before and added a new personnel role called a “construction technologist” or ConTech for short. These IT pros don’t just purchase a new piece of software, but rather determine if the contractor has a suitable comprehensive approach to technology to deliver precise, timely and efficient outcomes for its customers.

As a result, the Mechanical Contractors Association of America has increased its efforts to cater to ConTechs with a dedicated technology conference and an increase in appropriate training at its annual convention.

The future for these ConTechs does appear bright with almost half of the respondents to the JBKnowledge 2018 Construction Technology Report indicating they have a dedicated IT staff.

But the ConTechs probably wish they had more money in the here and now.

“The good news is more and more companies are moving towards dedicated Construction Technologists,” the report states. “The bad news is their budget and, therefore, their scope, is still limited.”

The report shows spending on IT was stagnant with 2017’s levels, with the majority of construction companies still investing less than a penny on IT for every dollar in annual sales. 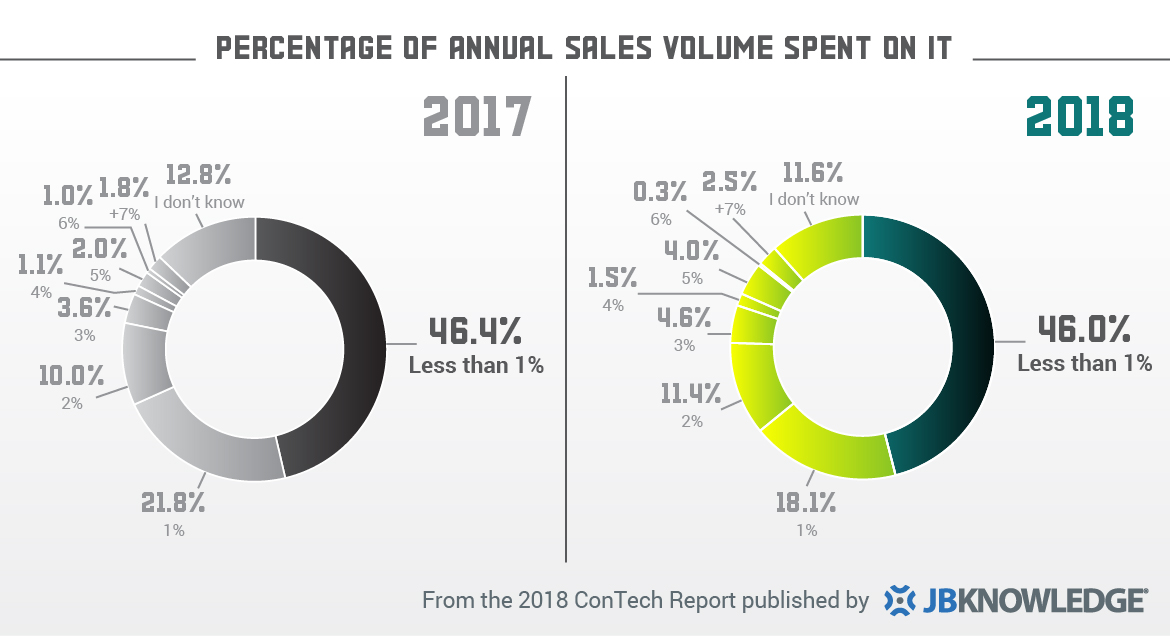 While half reported a dedicated IT staff, the majority still operated with a close-knit bunch. The majority (65.7 percent) said its IT personnel numbered from one to five employees. These numbers have also stayed steady since the survey’s start in 2012.

Still, the report did show an upturned trend in IT staffing with 40.2 percent saying companies had increased employment in 2018 and 35.7 percent in 2017.

“Incremental increases will hopefully tip the size of dedicated departments in the near future as companies see the return of IT as a stand-alone department rather than ‘when you have time’ additional duties,” says the report.

Which is a good thing since the most common answer to the question of what limits a contractor’s exploration or implementation of new technology was "the lack of personnel to support the programs.” Second was budget and third employee hesitation followed by management hesitation.

ConTechs are also not likely to be in charge of the show. The report indicates that IT staff report directly to CEOs and CFOs.

“Only larger construction companies have taken the initiative to embed IT leadership under CIOs, CTOs and the newly minted Chief Data Officer roles seen in other industries, to keep up with technology advancements and disruptions,” the report says. “Companies trying to stay competitive will have to figure out how to reorganize IT duties to really capture and grow IT value.” 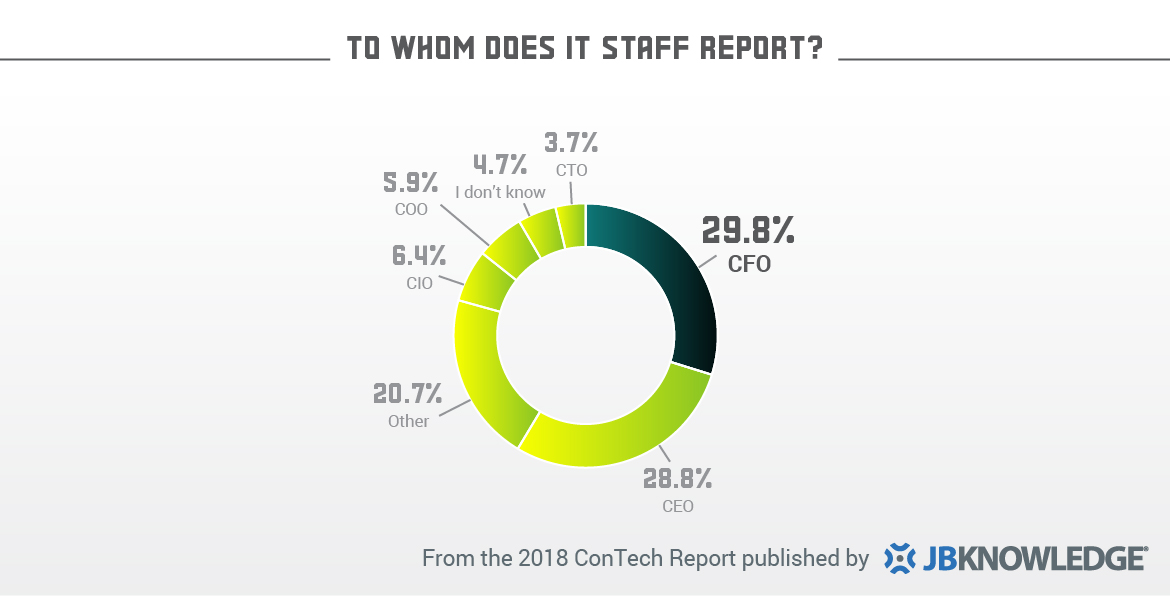 All in all, the 2018 report, which aims to identify trends that contractors across the country are following and their overall feelings towards adoption of new technology, highlighted a number of current roadblocks in the way:

• 38.6 percent noted a lack of staff to support new technologies.

• 28.5 percent of respondents cited a lack of knowledge about new and emerging technologies.

The 2018 report along with previous years' reports can be downloaded at jbknowledge.com for free.

Here’s a look at some of the report’s other highlights:

Although many construction firms take a hesitant approach towards technology overall, that is not the case with mobile technology.

A mobile strategy is rated as “important” or “very important” to more than 80 percent of the respondents as more construction companies rely on mobile in the field and in the office.

Consequently, the number of construction professionals who view mobile capabilities as “not very important” dropped to 15.4 percent more than a percentage point down from 2017 and more than 5 percentage points lower since 2016. 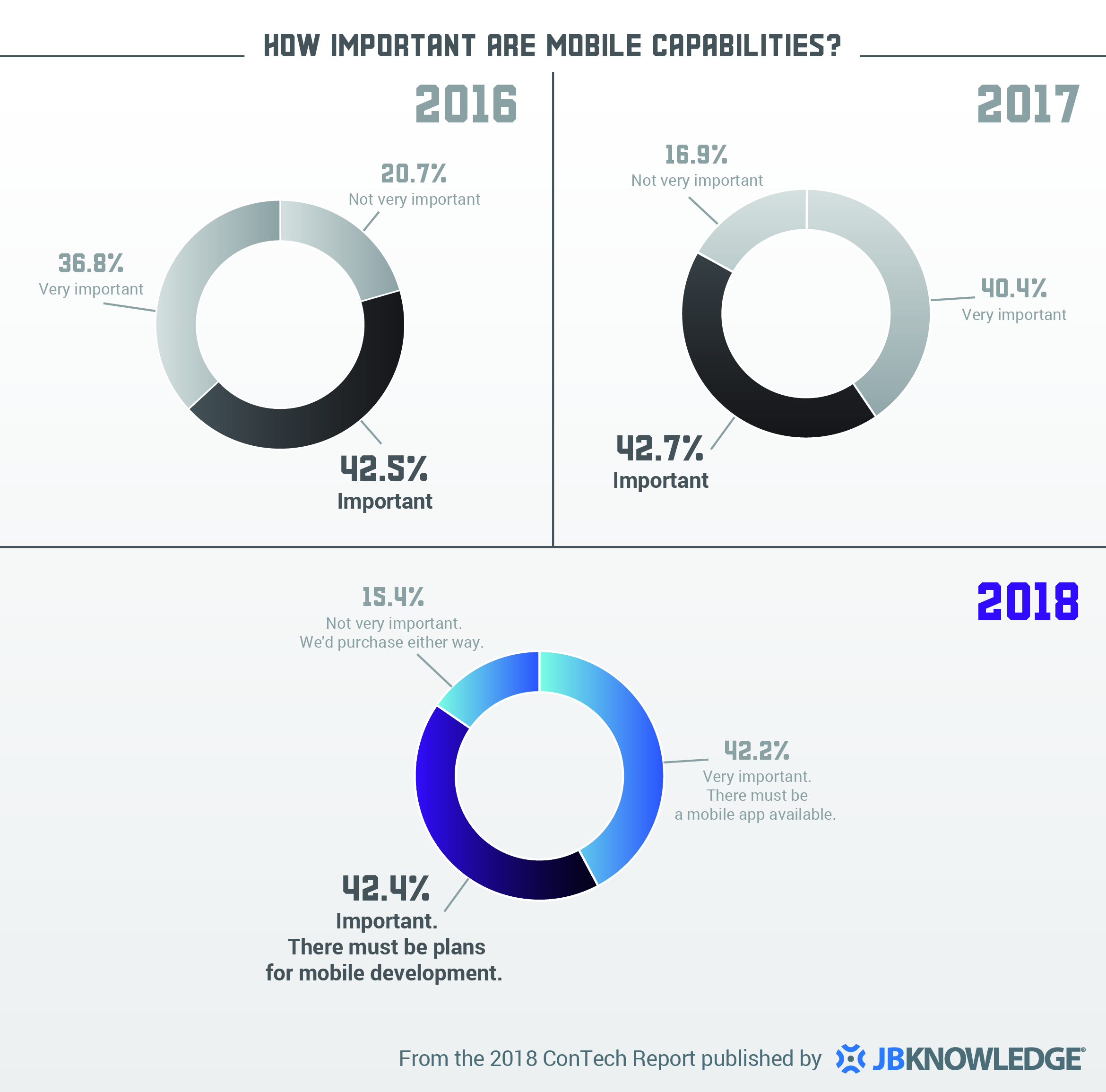 Among the mobile devices used daily by construction professionals, smartphones were on top at 92.8 percent; laptops second at 79.7 percent and tablets third at 62.1 percent. 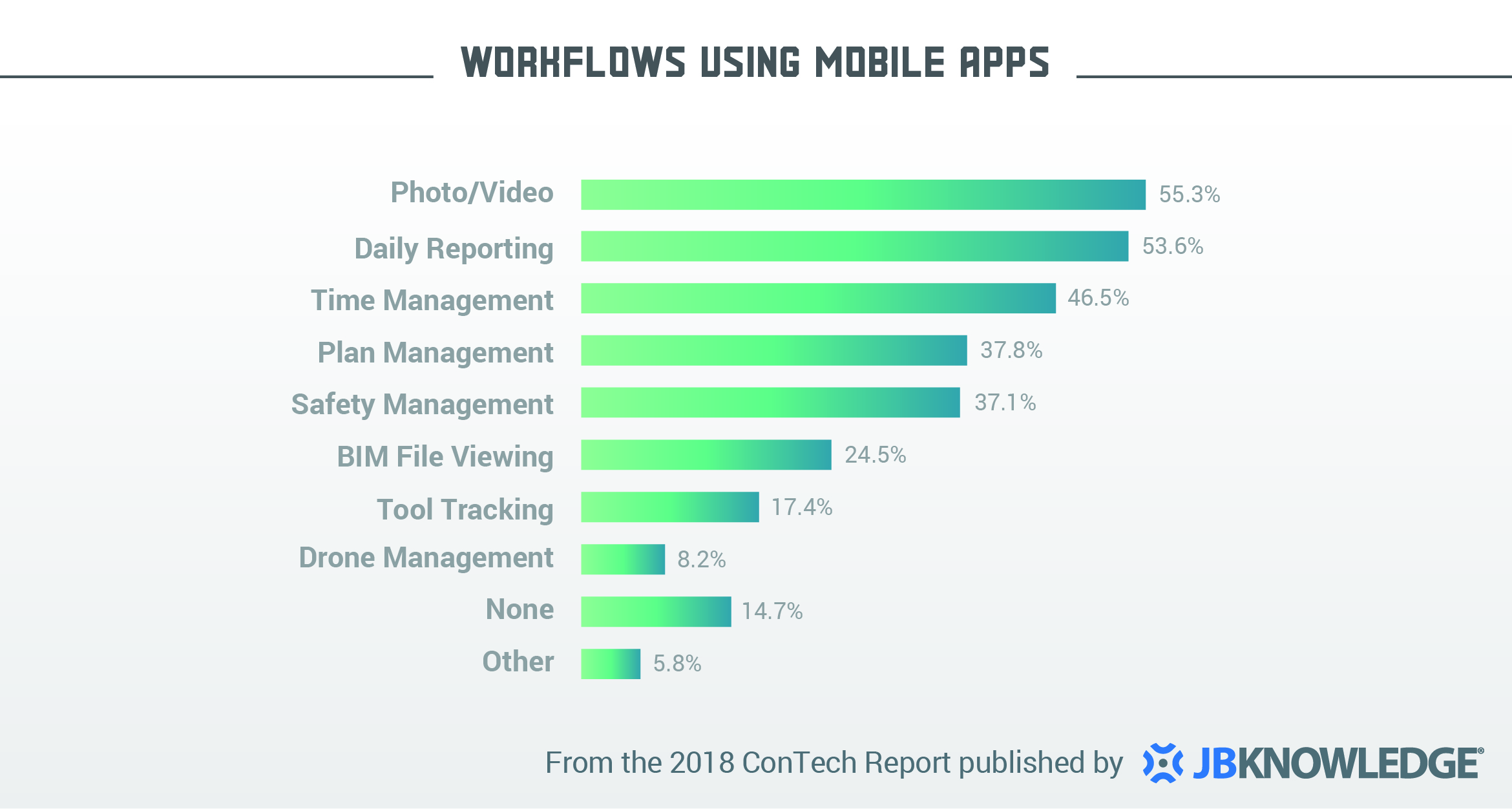 Apple’s iOS platform is the king with almost three-quarters of respondents using it. Windows (53 percent), Android (38 percent) and – somehow – Blackberry (0.9 percent) round out the list. (NOTE: Not all the answers add up to 100 percent since some questions were multiple choice.)

Most seem bummed out by BIM. More than a quarter of the respondents (27.9 percent) do not bid on projects involving BIM – the same as in 2017.

“Even the contractors who do have VDC staff say that on average only 36 percent of their active projects involve BIM,” the report says.

Half of the respondents have some in-house capacity to handle BIM, but around 17 percent outsource part or all of BIM.

As far as software goes, Autodesk still has a stronghold on the BIM field, with Revit, AutoCAD MEP, Navisworks, and BIM 360 Glue being the most used software of the respondents.

Coordination and clash detection, visualization, project planning, prefabrication and virtual mock-ups are the most popular ways of using BIM on projects, according to the report.

“While this means builders are streamlining the technology they use,” the report states, “it can also mean they don’t have a process in place for evaluating and exploring new solutions. With the overwhelming number of solutions available in 2018, it’s hard to blame them.”

Dedicated accounting and ERP software are the most widely used among the respondents (79.9 percent), followed by estimating, (56.2 percent) project management (54.2 percent and project scheduling (44.7 percent).

One big surprise was that 29.1 percent of respondents said their software solutions do not integrate. Only 6.9 percent say all their solutions do.

However, the 2018 report points out that manual entry is on the decline.

On the other hand, spreadsheets are still one of the most used programs in the construction industry. Estimating, accounting/ERP, project management and bid management are the biggest spreadsheet functions according to the report. However, the report notes that the dependency on spreadsheets is dropping.

Most construction professionals are becoming more comfortable with implementing new technologies, with 63.6 percent of respondents indicating their level of comfort to a quantitative question at an 8 or better on a scale of “least confident” (1) to “most confident (10).

Drones remain a popular emerging technology with 37.5 percent of respondents using them on construction sites, a figure consistent with the 2017 report.

Meanwhile, “old-fashioned” prefabrication technologies received a high rank with 37.8 percent answering the question, “Which of these technologies do you think will give your company a strategic advantage?” Construction professionals also gave strong scores to AR/VR/mixed reality, jobsite sensors and robotics.

“Unfortunately, the most popular answer is still ‘None,’ ” the reports states. “With small budgets, small IT departments and few defined processes for R&D, it’s understandable why companies are not convinced of the value of emerging technology – they don’t have the resources dedicated to making a case for it. They also don’t see their competitors employing these methods, and are comfortable waiting until they do, for better or worse.”

Although the report is not specifically on the construction industry’s labor shortage, JBKnowledge included the following information on the respondents’ demographics:

“An uptick in construction professionals born after 1980 would have been ideal considering the reported labor shortage in the skilled trades,” the report states. “Unfortunately, there was no significant increase in any particular generation compared to 2017.”

For a longer view, the report mentions a number of industry efforts aimed at recruiting younger generations and women into the building trades.

These include construction science programs at universities and colleges; training plans at trade associations and unions; and reverse mentoring, where construction companies identify young, tech-savvy employees to help train other workers in emerging technologies.