Justin Wroblewski describes himself as a self-motivated individual that has a passion for the construction industry. His passion was sparked at age 15 when he began building custom luxury homes, and it has continued throughout his career.

“After seeing the older generation of tradesmen in the field,” he says, “I began to re-evaluate my career path and I went back to school to remove myself from the hazards of manual labor.”

Justin pursued and received an Associate’s Degree of Applied Science in computer aided drafting and design technology from ITT Technical Institute where he graduated as Salutatorian.

“I was first hired at an engineering firm as a drafter,” Justin says. “As I continued to work there, I saw that the plumbing department was understaffed and overworked. So, I decided to learn the basics of plumbing to help them meet deadlines, which led me to a much larger role in the department. Once I got involved with ASPE, I started to further my knowledge by studying and passing the CPDT.

Today, Justin works as a certified plumbing design technician and coordinator at AMS Mechanical in Chicago, and his responsibilities span from everything from the preparation of plumbing permit/design documents to site visits and developing BIM documentation and workflow processes.

The self-motivated Justin is drawn to the fact that there are no cookie cutter plumbing systems, and every building poses a new challenge. “The engineering aspect of designing a building is always rewarding,” he says.

Justin currently holds the role of ASPE Young Professionals (AYP) liaison and product show chairman for the Chicago ASPE chapter. He has goals of becoming the president of the chapter someday.

In the meanwhile, he’s looking to obtain both the CPD and GPD certifications in the near future.

Justin recognizes that there is a need for others to pursue not only a degree in the plumbing engineering industry, but to also look to obtain certifications. “One of the biggest challenges in the plumbing industry,” he says, “is getting the younger generation involved. The lack of quality plumbing engineers puts a strain on firms to meet deadlines and produce a quality product. I encourage as many younger people in my profession to join ASPE as it is a great organization to be a part of that will advance your career and your reputation in the industry.” 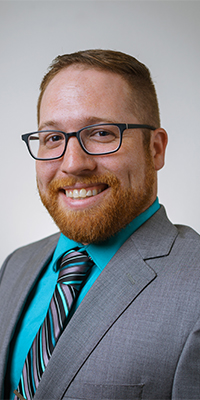 Through his work with ASPE, Justin has developed numerous professional relationships with vendors, contracting associations, and contractors. “As a young professional, I think this is one of the most important things to do in a career. The level of camaraderie within the ASPE community is wonderful,” he says.

In addition to networking, Justin says that learning is important. “Far more goes into plumbing engineering then just making sure the toilets flush. Specifically, learn calculations. This may sound simple, but each building presents different challenges. Some things that may have to be considered are sizing gray water systems, living walls, or grease interceptors to name a few, but the list goes on and on.”

Justin says that without a doubt, his father has been his role model. “He has taught me so much of what I know today when it comes to construction. When I was 12 years-old, I was able to work alongside of him to build the house my parents live in to this day, learning all the while. He has helped construct me (pun intended) into the person that I am today, which is a dedicated, hard-working, and talented. A person who never sacrifices quality.”

It seems he has taken a page from his father’s book.

In his role as AYP liaison and product show chairman, Justin has strived to stay connected with the younger individuals in his chapter, as well as other associations, to encourage them to attend every function that is available and set up functions for them to network.

“Last summer, I was involved in planning a a joint association event with ASPE, a mechanical contracting association, a plumbing contractor association, and an electrical contracting association. It was a big hit with more than 180 contractors and engineers in attendance. In order for the younger generation to be involved in ASPE and to grow the organization, we need the AYP to continue to entice the younger engineers to get involved. Once they see how much fun the events and the people are, they continue to come back.”

When asked what he would tell the next generation of plumbing engineers, Justin says, “I would tell them to be social. Whether that means attending events or talking to co-workers, just be social. Everyone has had different experiences to get them to where they are in the industry and learning from them will help you grow as well.”

Justin doesn’t consider himself to be a lazy, although his generation has certainly gotten that reputation. He asks, “Is it really laziness if you work smarter and not harder?” “The older generation,” he says, “has criticized the millennial generation for being lazy but in fact, it’s technology that has made the way of life easier. That doesn’t mean that millennials should always take the easy road. I do believe they should want to understand the principal or theory behind the task at hand.”

In the next five years Justin hopes to take on a senior plumbing engineering position and oversee a group of younger engineers on larger scale projects such as high-rises, hotels, and hospitals. “I also hope to be married and have a nice vacation home on a lake for weekend activities,” he adds.

We look forward to seeing those projects come to life!