While attending school at YTI Career Institute in York, Pennsylvania for computer aided drafting and design with a concentration in civil design, Ron Saunders made a discovery. He found he felt more intrigued with drawing buildings than roads.

“The mechanical parts of the building, including plumbing,” he says, “was much more interesting to me.”

When it came time to find an internship, Ron applied for a MEP drafter position at Johnson, Mirmiran & Thompson (JMT). “JMT, oddly enough, does a lot of civil work, but I knew the MEP department was where I wanted to be,” Ron says.

He got his start as a drafter working on mechanical and plumbing drawings, and after just two weeks, he was brought on as a full-time hire. From there, he began to ask for design-related tasks. As the engineers gained confidence in his abilities, he would get more and more design work. “I became a multi-tool, able to jump from mechanical to plumbing, from project to project, from markup to design, completing any task I was given,” Ron says.

“Ron Saunders started with JMT as a CADD operator in May of 2009 and has continued to exceed our expectations, and our clients’ expectations, ever since,” says Ian Innes, P.E., CFPS, LEED AP, senior associate, Facilities MEP at JMT. “His talents with respect to drafting and computer modeling are unmatched by anyone I’ve ever had the pleasure to work with. His passion for CADD and BIM is equaled only by his enthusiasm and love for plumbing system design. It took only a few years for him to be promoted to designer in our facilities MEP practice. More recently, he has been promoted to project designer (one of only two individuals in our entire 1,600+ firm).”

Ron came into the plumbing industry because he was intrigued. He sought the challenges, created the work, and established his place. Perseverance has served him well. 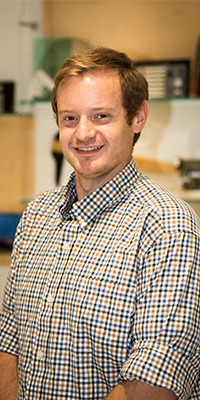 “There is more to plumbing engineering than you may expect,” he says. “A plumbing engineer needs to be flexible, able to investigate, problem solve, predict, react, and create a product that any contractor can pick up and build.”

Even with his ability to predict, react and create, he remains fascinated by how a building really works. “Before I started in this field, I never really thought about buildings as something that functions,” he says. “Now when I walk into a building, I see piping and ductwork and I can’t help but evaluate the building and attempt to figure out what systems it has.”

Ron has looked around, made his observations and points to a few challenges he sees in the industry.

The code books he says are one of the biggest challenges in the industry today. “There are so many things to consider in the design of a project that have you rooting through a dozen books to find one sentence that says you can or can’t do this or that,” he says. “It also feels like the answer is often vague and up to interpretation. In its own way, that’s a good thing, but certainly it’s a big challenge.”

Another challenge he points to is the plumbing industry being able to keep up with technology and trends. “A lot of our design process is developed from technology and information established 70+ years ago,” he says. “As an engineer, being a part of ASPE and never forgetting to ask ‘why,’  is the best way I can think of to help address this challenge. The more we question how these systems are designed, the better we can understand how they should be designed.”

Ron’s short-term goal is to create comprehensive sizing tools for plumbing systems, water supply, drainage, etc... “Our group has created many mechanical tools, but very few for plumbing. Since our industry is constantly asking us to finish projects in less and less time, finding ways to simplify our process is a must,” he says.

As for his long-term goal, he wants to help educate some of the mechanical engineers at his firm on the finer points of plumbing design. “A co-worker and myself recently put a ‘Plumbing 101’ presentation together. After our first run-through, we received good feedback and we will be putting together more in-depth presentations to educate our group.”

For the love of it all

Ron was one of the first individuals in the country to receive the CPDT certification from ASPE, which he achieved in 2015. He was initially one of only two in Maryland the certification. Since then, he has achieved the CPD certification, which he earned earlier this year.

“Construction inspires me,” he says. “Seeing a system that I designed get built, commissioned, and used inspires me.”

Ron loves that he gets to work on a variety of projects, ranging from a simple remove and replace of fixtures to full systemic renovations of a high school.

“It’s a good field to get into,” he says. “Especially if you’re a technically-oriented person. It’s not all math and books; there’s a lot of field work and problem-solving that go into plumbing engineering.”

Aside from his intrigue of how things are built, Ron credits the team of engineers and designers at his firm for keeping his love of industry going. “All the engineers and designers I have worked with at JMT have been great role models for me. I’ve been able to learn a lot working with them and they have been great examples of how engineers should be. From the basics of calculations to interacting with clients, the group I work with is simply the best.”

As it turns out, they feel the same about him too! We’re excited to see the next chapter of problem-solving he takes on.