When he’s not working, Andrew Hemmelgarn spends a lot of time in his garden or working on the yard. “It sounds cheesy,” he says, “but I love the different and specific water requirements of different plants. Trying to grow tropical plants in a Midwest climate is a constant challenge requiring innovation at times.”

Andrew was born and raised in a very small, rural Ohio village called Maria Stein. “My mother is by far the biggest early influence in my life,” he says. “Rather than pushing us toward more agricultural education (which is dominant in the town), she took us to all the science museums and discovery centers within a day's drive. This exposure guided my childhood interests of constant experimentation and discovery. It also pushed me toward a love of math and science, which is the foundation of my career.”

He studied mechanical engineering for five years at the University of Cincinnati. “My pursuit of plumbing engineering began in my 3rd year of college,” Andrew recalls. “I was first exposed to the industry during a co-op semester when I worked at Hixson Architecture, Engineering, Interiors and was placed in the plumbing department. I quickly realized the huge scope that the discipline covered and how much the residential and commercial industries rely on plumbing.”

After graduation he was hired on full time at SHP, an architecture/engineering firm based in Cincinnati, Ohio, where he’s been working for the last four years. “My role as a plumbing engineer encompasses all aspects of the plumbing system, including coordinating with other trades (HVAC, electrical, civil, structural, etc.) to deliver a project on time with minimal changes.”

Andrew is intrigued by plumbing’s history. “It has existed in some capacity since ancient times and has played a massive role in human development,” he says.

It’s not just the value plumbing holds in society that fascinates Andrew.

“Engineering as a whole inspires me because of its ubiquity,” he says. “It relies on solid principles of math and physics, both of which have the same truths no matter your location on this planet. Gravity still works the same in Georgia as it does in Shanghai. I've heard it said that music is the language of the world. Personally, I find math to be the purest language of the world. One plus one equals two everywhere, no matter your measurement system or spoken language.” 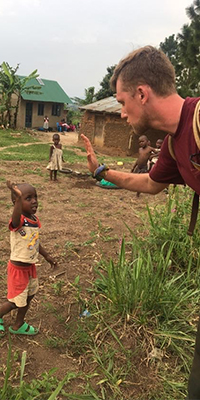 His short-term goals are pretty straightforward; he wants to be the best at what he does. And what he does has a huge impact within the community he serves.

SHP has grown over the years primarily through work done with public schools in Ohio.  Andrew takes a lot of pride in what he does. “It comes from the fact that if we can design a school to be more energy efficient and environmentally conscious, we can save the taxpayer from future operation levies to fund the school's utilities.”

When asked about his proudest accomplishment to date, Andrew talks about the work he did for Cedar Fair Entertainment, an amusement park in Sandusky, Ohio.

Andrew needed to develop an entirely new understanding of systems with which he was not very familiar. “I helped to spearhead the undertaking of learning the new systems, which has resulted in great successes for our firm," he says.

Andrew now looks to gain a better understanding of code and its interpretation in the many jurisdictions in which his firm works. “I want to use that code understanding to influence our designs,” he says. I'm also working to better use Revit and BIM within our organization for coordination between the MEP disciplines.”

His long-term goals are to develop sustainable relationships with clients and contractors so that he can one day bring work into the firm. “These types of relationships take many years to build and grow,” he says, “but by planting the seed now, I'm hoping to have a harvest later on.”

It takes the kind of mind that can be patient with growing a tropical plant in a Midwest climate to have that kind of forethought, and perseverance.

Andrew realizes that he’s part of a select few in his generation drawn to plumbing engineering. “The biggest challenge facing the industry,” he says, “frankly, is a lack of 'sexiness' in the profession.”

But that didn’t stop him.

“I truly fell in love with the profession because every building has a plumbing component — whether it's a school, business, stadium, etc. — and if we do our jobs correctly, the tenants will not even be aware of the plumbing system in the first place,” he says.

As for what he thinks about the stereotype that millennials are lazy, he says, “Maybe you're right. But if that's true, it's because the generation is jaded by life. We're aware of stagnant wage growth, disappearing pensions, and rising home prices. Achieving a comparable lifestyle to the boomer generation is difficult. The same salary just doesn't cut it any longer. So, with that in mind, why kill yourself at work? We're very likely going to have to work into our 70s. That's more than 40 years away for me right now. Millennials are working toward a life balance so that we can enjoy our young years while we have them, knowing that we have plenty of time left to work.”

All that being said, “All generations have their share of lazy workers,” he adds. “The millennial working model is just different from the boomers and that can be difficult to accept.”

To the generation following his, he says, “Come and join us, the water is fine!”