The story of Watertree of Dewitt is one of constant change.

Hot water and cable TV. That, according to facility manager Ken Allen, is what condo owners absolutely won’t go without.

Allen has served as manager of Watertree at Dewitt condominiums for 36 years.  In that time, he’s developed a knack for keeping the neighborhood at peace.

“Residents will tolerate a lot, considering that they own the condos and are largely responsible for their own properties,” said Allen.  “But if the water runs cold or the TV doesn’t work, I know I’ll get calls.  And truth be told, we almost never hear about hot water.” 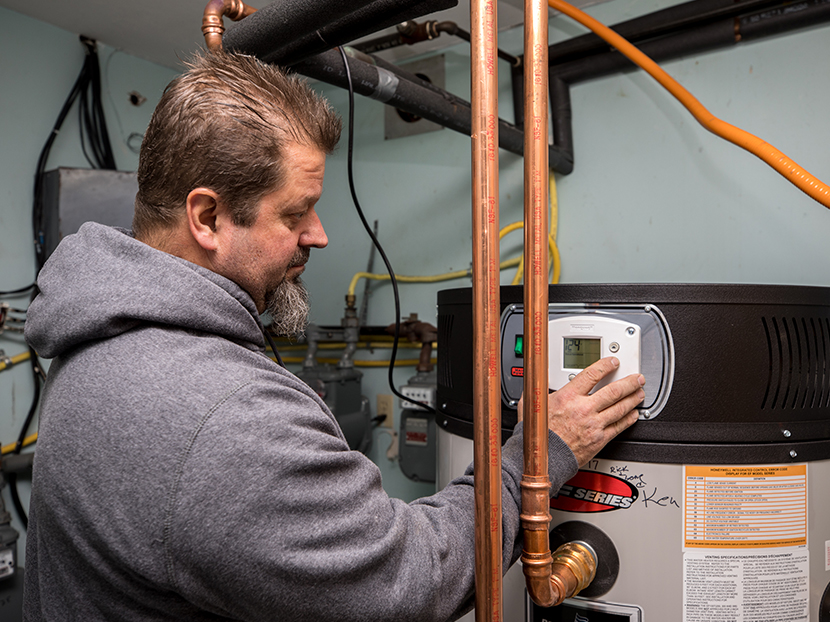 The 320-condominium project in Syracuse, New York, was built in 1975.  Each of the 40 buildings contain eight, 850-square-foot condo units.  One large, tank-style water heater in the basement of each building supplies domestic hot water (DHW) to all eight condos.  It’s the same method of delivering DHW that’s been used since 1975, though the equipment has evolved rather dramatically.

Today, high-efficiency, tank-style commercial water heaters serve the property. But in the 33 years since the building’s original electric water heaters were replaced, all the players remain the same:  installers, reps, wholesalers and manufacturers.  Watertree of Dewitt could serve as a case study in good business practice.

Throughout the mid to late ‘70s, when power costed about $.02 per kWh, Watertree of Dewitt was an entirely electric facility. When the condos were built, electric water heaters were installed. The plumbing work was done, in part, by Gene Topolski. It wouldn’t be his last project at Watertree.

A few years into Allen’s tenure, the price of electric changed substantially. Managers at Watertree responded by switching to a different energy source in 1990.

“By then, we were paying more than $.12 per kWh,” said Allen.  “So we had the gas utility hook us up, and we replaced all of the major appliances. Through Northeast Sales Associates, Mike Cannavino at CO Supply delivered the 40 new gas-fired units. The 100-gallon Bradford White water heaters offered a large cost savings over the electric units, and served the facility for 12 or 13 years with no real issues.

In 2003, again under Allen’s direction, Watertree of Dewitt started looking for the right equipment to replace the first set of gas-fired water heaters. His first calls were to Northeast Sales and CO Supply, where Cannavino suggested trying Bradford White’s first commercial, gas-fired, condensing water heater — the first generation of the current eF Series unit. Allen had one of the power direct vented, 100-gallon units installed.

“It was a more expensive unit than the previous models, so we tracked gas consumption and found a 35 percent savings,” explained Allen. “When we factored in the cost of installation, and it gave us a three- to four-year payback. So we started installing them across the property as needed, ultimately buying 39 more over the next few years.”

There was a short learning curve involved with the through-wall venting until several of the new units had been installed.  Dustin Bowerman, technical support director at Bradford White, visited the site during the installation and answered maintenance questions from that point forward.

“We’ve got more than a dozen years of hard use out of a commercial, tank-style water heater,” said Allen. “I think that’s saying something.”

Aside from a few standard maintenance requirements over the years, the new tanks delivered hot water and energy savings for longer than expected.  About half of the units are still in service today.

“Around 2010, a sales rep that handled a line of tankless, gas-fired water heaters convinced me to swap an old tank for three new wall-hung units,” said Allen. “I know that tankless and recirculation technology has come a long way since then, but that experiment was a flop.”

The tankless units didn’t start to fire until shortly after a tap was opened, so the wait for hot water was twice as long as before.  Residents began to complain.

Having monitored fuel use, Allen found that the three tankless units used more gas than the storage-type units.  To add insult to injury, water and sewage costs went up too, due to the longer wait times for hot water. 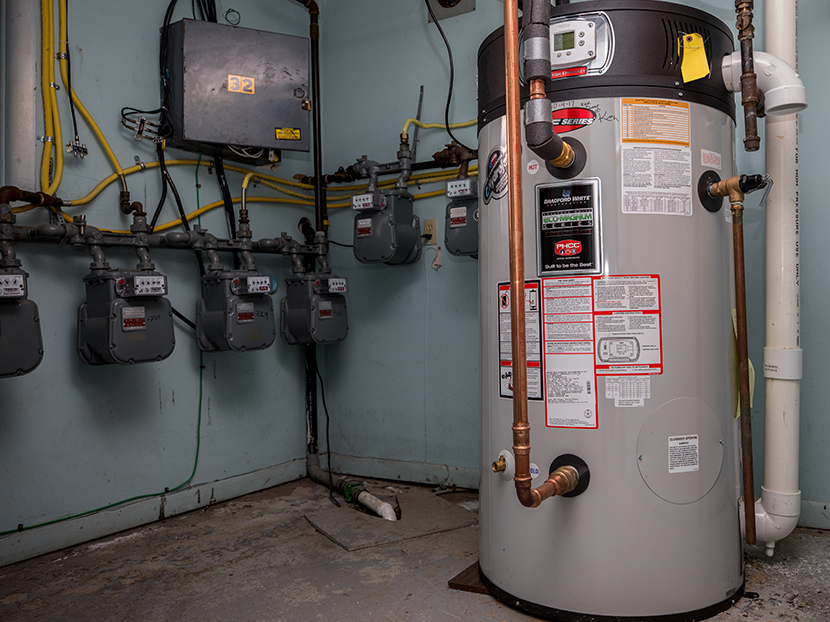 “The tankless units were in service for about two years before we pulled them out,” said Allen. “And that was really the last time that we changed any DHW equipment until about four years ago. Now 12 years old, none of the Bradford White high efficiency tanks have leaked, but parts are starting to wear out and we started looking for the next solution.”

“I immediately told management that I wanted to install Bradford White’s eF Series commercial units,” said Allen. “By that time, the units were in their second generation.”

“They wanted to price shop, but I put my foot down,” he continued.  “To me, the Bradford White quality was evident, and beyond that, my familiarity with the product, and the relationships that I’d built with Dustin Bowerman, Mike Cannavino, and everyone at Northeast Sales was worth far more than $100 or $200 we might have saved by buying something else.”

Before long, Topolski, along with Rick Dannan, who ownsowner of Dannan Plumbing LLC, started replacing the existing water heaters with 60-gallon Bradford White eF Series commercial units. Topolski had since become a journeyman plumber, and Dannan is a master plumber. The two-man crew handles all plumbing needs at Watertree.

“We knew that the recovery rate of the eF Series units was very good, so, just as a test, we installed a 60-gallon unit with a 150 MBH capacity, along with a tempering valve that allowed us to maintain slightly higher tank temperatures,” said Dannan.

“Over the course of a year, we didn’t have any complaints,” he continued. “But when it came time to replace numerous tanks, we settled on the 199 MBH size, which allowed us to get rid of the tempering valve. It’s one less step in the process and one less thing to maintain.”

“The first time we installed an eF Series unit, we thought it was broken,” said Dannan. “We filled it with cold water, fired it, and it shut off in six minutes. It took us a few seconds to realize that it had already reached its setpoint temperature.  I’ve since suggested these units to several other condo complexes that we service.”

Everyone involved agrees that using 60-gallon units instead of the 100-gallon units that had always served the facility was a huge advantage. The basement stairs weren’t nearly as formidable a challenge anymore.

“I’d like to say that I’ve been tracking the gas consumption of the new eF units, but I’m content just knowing that we’re doing better than ever,” said Allen. “The oldest unit is about four years old now, and I haven’t had a single problem.”

Watertree of Dewitt is only halfway into its third generation of Bradford White water heaters.  And even more impressive, none of the key players have changed in that time. Some good things never change.