Is it Wise to Install Water Heaters for the Big Box Retailer?

Determine if your time and training are worth the risk.

In a conversation with a contractor from Michigan, who I’ll refer to as Joe (not his real name), I learned that he was installing water heaters for a big box retailer. When contractors tell me that they replace water heaters or any item for that matter for big box retailers, my skin crawls since. In my opinion, this practice is detrimental to the contractors’ business.

He told me the cost he incurred for one tech hour of labor and overhead was $214. This amount falls within the range of $100 to $250 per tech hour, dependent upon their location in the U.S., that I claim all contractors incur to place one qualified service tech in a properly equipped service vehicle if they sell all their available tech hours all the time.

He informed me that for a 40-gallon capacity natural gas water heater, the big box retailer paid him $430 for the installation to cover his charges and the ancillary material cost — not the water heater.

Just based on the information I have provided, it’s easy to see that in this case it certainly was detrimental to his business. Based on his stated hourly labor/overhead cost of $214, even if I were to believe he performed this task in two hours all the time (and I certainly don’t), his labor/overhead cost would be $428. Add to that $428 the $30 he claims his ancillary material cost (I don’t believe the $30 either. I think it’s higher on average). His cost to perform each task would be $458 so that he could collect $430. That’s a $28 deficit every time he performs this service.

As I have stated, I think he really takes more than two hours on average for these installations, and, that the ancillary material cost is more than $30. As to the cost of the heaters I’ll take his claim of $288 as credible since heater prices fluctuate dependent upon where they are purchased. Using his numbers, Figure 1 shows in increments of 100 heaters how much profit would be brought into his business if he sold them direct to consumers for $1,700 instead of installing water heaters for the big box retailer. 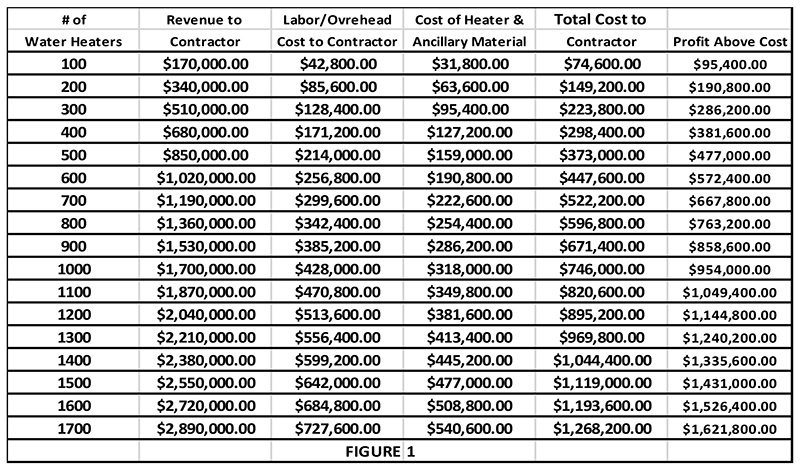 Don’t fool yourself. Big box retailers are not your friends or benefactors. Since both you and they sell water heaters, they are your competition. If you were attacked by an enemy, you wouldn’t supply the enemy with weapons and ammunition. You would never shoot at the enemy, and then, run to the enemy and shoot back at your own people (business). Yet, that is exactly what contractors do when they install for big box retailers at prices that do not allow them to recover their cost and earn the reward they deserve while exacerbating their business problems by depriving themselves of selling the water heaters directly to consumers. It’s called shooting yourself in the foot.

Before deciding to install water heaters for the big box retailer or anyone in competition with your business, keep in mind: the time and training you had to go through to attain the knowledge needed to become a PHC contractor, the true cost you incur to run your business, and, the risk associated with the installation of water heaters — such as people scolding themselves with extremely hot water, carbon monoxide poisoning, leaking heaters and the potential for a water heater explosion. Then ask yourself if it is worth installing a water heater for another entity and not earn the reward you deserve for the excellence you deliver and the risks you take in the delivery.

If you have an opinion on this article, any business matter, or just want to talk to me about the ways my Contractor Profit Advantage programs can help you improve your business results, give me a call.