Though the overall architecture of most Geothermal Heat Pump (GHP) systems in the U.S. hasn’t changed a lot over the last few decades, there are several interesting design and equipment innovations that can help improve efficiency, reduce cost and increase the overall utility of this fundamentally different approach to heating/cooling buildings and heating domestic water. This article will cover one of those technologies, namely Underground Thermal Energy Storage (UTES). The primary focus will be on one form of UTES known as Borehole Thermal Energy Storage (BTES). It’s sister technology, Aquifer Thermal Energy storage (ATES) will also be briefly covered along with the complementary technologies of Simultaneous Heating and Cooling (Heat Recovery) Geothermal Chillers and adiabatic dry-coolers that were both part of the BTES project described herein.

Although there are alternate forms, water (or water with additives) is the typical heat transfer medium that exchanges heat between the GHPs and the sub-surface. The underground portion of a GHP system is typically classified as closed loop, meaning the water is circulated in a literal closed loop or network of piping and never directly contacts the geology, or open loop, meaning liquid water is extracted from the ground and used to heat/cool a building’s HVAC and/or plumbing systems and then discharged somewhere at the surface or injected back into the aquifer.

The architecture of the underground portion of conventional GHP designs in the U.S. is often referred to in the international community as a “Direct Utilization” (DU) type design, as opposed to an UTES type design. We will focus on the differences between a UTES and a DU (conventional) system with a conventional Groundloop Heat Exchanger (GHX) or water supply/injection wells. The distinction between UTES and DU is important because UTES systems are extremely rare in North America and not well understood. DU is “the way it’s always been done.” Therefore, there is a lot of engineering inertia to keep designing systems that way, even though UTES is inherently a superior architecture. Conventional U.S. open and closed loop designs, while most certainly engineered to exploit the trait of the subsurface as a superior (warmer) heat source in winter, and a superior (colder) heat sink in summer are typically not arranged for optimum heat and/or cold storage. The GHX itself, or the water wells in the case of open loop systems, are not explicitly designed to store heat or cold per se, it is just something that often happens over time. In fact, when storage happens in closed loop systems, it is often a bad situation. On an annual basis, cooling dominated systems — that are without an auxiliary means of heat rejection — will release more heat into the subsurface than they extract. If the imbalance is significant, they will eventually begin to undesirably store heat in the ground and the overall loop temperatures will rise and annual efficiencies will fall. The systems can even fail. Similarly, heating dominated systems, without an auxiliary heat source, will extract more heat from the geology than they reject, and will eventually store cold. This can also lead to issues like the possible freezing of the circulating water or, even if the loop is protected by anti-freeze, the seasonal drop in loop temperatures can trigger refrigerant low pressure switch or other safety controls to shut down the equipment.

With the geology that is accessed by the GHX being essentially an infinite slab that is seeking to obtain thermal equilibrium, some heat is always flowing across the GHX boundary (perimeter). This natural flow of heat/cold acts to decrease the temperature differential between the local geological temperatures (within the BTES), and the long-term temperature of the undisturbed ground temperature (UGT) outside the BTES. The UGT values within around 500 feet of the surface are typically within a few degrees of the long term mean annual air temperature at the project site. If the annual heat transfer to the GHX/BTES is significantly imbalanced, the GHX’s value to the building owner can be diminished or even result in a thermal failure of the associated GHPs. This degradation/failure is manifested in the form of loop water that is too hot at peak cooling conditions or too cold in peak heating conditions. This phenomenon, and the quest to try and reduce the capital cost of GHP systems, has led to the rise of so-called hybrid systems. These designs incorporate a heat rejection or heat source to the GHX loop to attempt to balance the loads on the ground and cover a portion of the peak heating or cooling load based on the dominate need. UTES is a complimentary architecture to the hybrid concept and it is intended to optimize the thermal storage characteristics of the geology, reduce capital cost of a GHP system and improve its efficiency.

A BTES system is an alternate closed loop GHX system design that must be modeled, engineered, constructed and operated in a manner that is different than the typical closed loop GHX systems as it is normally configured for the North America marketplace. BTES systems are deliberately designed to store the primary thermal demand of a system, not just use the geology as a good heat sink/source. In other words, heat pumps serving cooling dominated systems primarily need cold, and heating dominated systems primarily need heat.

BTES systems on the other hand have three primary features that set them apart. Those are:

Though the BTES architecture offers several advantages over conventional or DU GHX systems, there are a few parameters that should be considered before applying BTES to a specific project.  Those are: 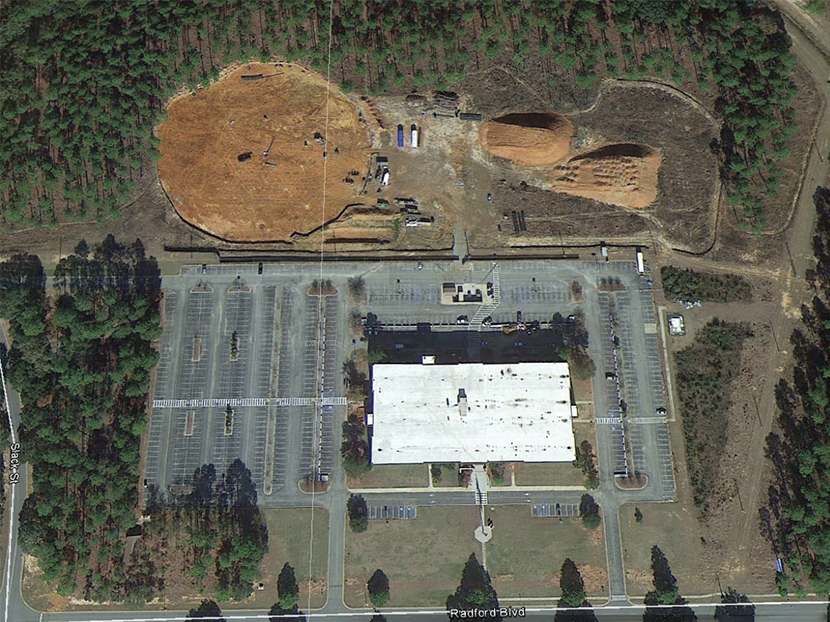 Though BTES systems are in use throughout the world, they are rare in North America to non-existent in the U.S. Sometimes they involve heat pumps, but often not. Examples outside of North America include their use in conjunction with Combined Heat and Power (CHP) systems where heat is stored in the BTES when the electrical and thermal demands on the CHP plant are mismatched and the stored heat can be used later. Underground heat storage can be done anytime, but in colder climates, it is typically done during warmer weather and used in winter to provide seasonal storage/utilization of otherwise wasted off-season heat. In North America, a BTES near Calgary Canada, in a heating dominated application, is used to store the excess heat from solar collectors after above-ground storage tanks are filled to capacity. This underground heat can keep homes in the residential development warm at night, on cloudy days or in the heart of winter when the sun is at an ineffective low angle. During all these situations, the solar collector’s output is compromised or non-existent and the BTES covers the load.

In 2015, at the Marine Corps Logistic Base (MCLB) in Albany Georgia, construction on the Department of Defense’s (DoD) first BTES (and probably America’s first BTES) was completed adjacent to Building 3700. It served a partially new and partially reused HVAC system inside the building. In the BTES cold is being stored in the geology surrounding its 306 boreholes that are 210 feet deep and constructed of 1.25-inch HDPE U-bends, grouted into the limestone-laden formation with a graphite-enhanced thermal bentonite grout. BTES-1 serves Building 3700, a 168,000 square-foot cooling dominated three-story building that has a mostly traditional four-pipe chilled/hot water system throughout. These hydronic systems serve two VAV air-handling units per floor and their 110 hot-water VAV boxes. Outside the building, with the BTES being hidden underground (and protected from two separate tornado’s that devastated the Base in 2017), the only other unique HVAC components are the two large adiabatic dry-coolers (ADC) located adjacent to the BTES. Heat rejection from water-cooled HVAC equipment in the U.S. is nearly always accomplished by high water-consumption cooling towers, and occasionally by standard dry-coolers. Sometimes, the former can contain in internal coil (a so-called evaporative cooler or evaporative condenser), but these systems are not optimized for sensible heat rejection. With the BTES heat rejection to the atmosphere occurring primarily at night and in the winter, and the desire to minimize water consumption, an adiabatic cooler was selected for this project. The adiabatic label means these dry-coolers are capable of evaporatively cooling the incoming air when required to operate in high dry-bulb conditions, a situation not typically the primary mode of environmental heat transfer in a diurnal/seasonal BTES.

In the main mechanical room, two centrifugal chillers and two condensing boilers were removed to make way for five modular 85-ton, heat-recovery, water-to-water GHPs that make chilled and space heating hot water for the building. As an office building, the domestic hot water load is virtually non-existent, but in other facilities, GHPs would also be used to cover the domestic hot water load. The only other non-traditional equipment (for a hot climate like Georgia) is the use of four row coils in the VAV boxes versus the one-row HW coils that were removed. This modification was made so that free (heat recovered) hot water from the condenser side at 110 F could be used and dramatically improve the overall efficiency of the system. On somewhat rare occasions, the GHPs will switch to the dedicated heating mode and energy will be withdrawn from the core of the BTES in lieu of being directly heat recovered from the building itself.

DoD, NAVFAC and MCLB have been pleased with the operation of BTES-1. During its first year of operation, 100 percent or 4.2 million gallons of HVAC water consumption have been eliminated by the removal of the cooling tower and substitution of the adiabatic dry-coolers, which were operated exclusively in the dry-mode. Perhaps the sometimes problematic waterless urinals or water-saver toilets are not the primary water consuming/saving-opportunity in office buildings where the HVAC system is water-cooled via a traditional cooling tower.

Metered HVAC energy consumption (gas and electricity combined) was recorded before and after the project’s implementation and it was reduced by 47.5 percent. The feat was accomplished while enduring higher Cooling Degree Days and occupants who used cooling thermostat setpoints a degree cooler during the first year of system operation. Onsite emissions were also eliminated and the capital cost savings versus conventional (non-hybrid/non-BTES) Geo estimated at 34 percent. MCLB/NAVFAC was so pleased with BTES-1 that they ordered the redesign of three other non-BTES Geo projects that were already designed conventionally. Those construction contracts for BTES-2, 3 and 4 were awarded in 2017 and construction will be complete in 2018. This past November, DoD awarded BTES-1 (and its cousin ATES-1) their “ESTCP Energy & Water Project of the Year.”

In conclusion, engineers and designers should consider the advantages of configuring their closed and open loop systems for thermal storage if they want to reduce capital cost, improve efficiency, create a more thermally robust system that is immune from long term degradation of performance and provide a truly sustainable system that will remain so over the decades. UTES also functions as an enabling technology that improves the operation of heat recovery systems by providing the chiller/heater with a large, controllable, thermal mass to cover the imbalance between heating and cooling loads. ATES systems, with their direct use of ground water are often more efficient and cost effective than closed loop systems, but the hydro-geology and water chemistry are critical, so they cannot necessarily be used on every project. BTES on the other hand is a 50-state technology and offer all the benefits stated herein along with a more compact borefield than conventional closed loop system and should be considered on most projects sized 50 tons or larger.