Here are some oddities from across the pond.

In late July, I planned a vacation to England with my girlfriend, Marjan. The trip turned into a fiasco. She purchased the airline tickets and got a very good deal on WOW Airlines (I know; I never heard of it before either — it's an Icelandic airline). We got to the airport with time to spare and started the check-in process. First, they checked Marjan and her bag. When they were checking me, they told me my passport was expired. I told them that it was not; it didn’t expire until September. They in turn told me that to fly to Iceland I needed three months left on my passport. I told them I wasn't flying to Iceland; I was flying to London. They told me that I had to change planes in Iceland, and in order to do that I needed three months left on my passport. This argument went on for some time, as you can imagine, with the supervisor’s supervisor’s supervisor, but to no avail. 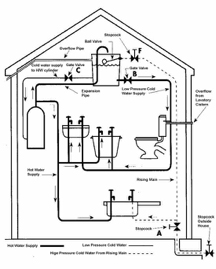 Since I couldn’t fly, Marjan said that she wasn’t going alone, and she needed her bag back. They said this was no problem, but we would have to wait. Two hours later, they came proudly marching out — with the wrong bag. As I write this, Marjan is in Croatia with her kids, still without her bag, and with a secondary wardrobe. Lord knows if the other passenger got their bag back.

Anyway, the intent of this introduction was to share my trip to London, and what I learned about British plumbing. Instead, I will have to share from memory when I designed projects there in the late 80s coupled with some tidbits I found on the internet.

For many years, residential water piping in England was required to be piped directly to the kitchen sink cold tap and then to a cistern in the attic. From there it was piped to the water heater and other fixtures. The only fixture considered safe to drink from was the kitchen sink cold tap because the water in the cistern was potentially dirty. Water pressure at the fixtures was notoriously low due to the low elevation of the attic cistern. 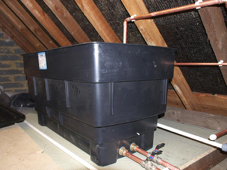 Waste piping was equally strange. Fixtures other than water closets were piped indirectly to the waste system, and waste piping was frequently piped exposed outside on the rear of the house. I can only guess that this was done because the buildings were so old that when they were built they didn’t have plumbing, and when it was added, it was easier to install it outside than inside the walls. 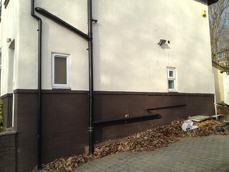 As the waste pipes are collected below grade the pipes combine in an inspection chamber, which is an octopus-like fitting that has an access cover to grade. From this one access point, up to eight conjoining pipes can be inspected and cleaned out as required. Indirect wastes from the gray water fixtures spill to what we would refer to as a hub drain prior to making a connection to the inspection chamber. Storm drains also connected to the hub drains before being piped to a combined storm and sanitary sewer system. Some parts of England have separate sewers, so in those parts these two systems would not be combined.

If you have traveled to London and stayed in some of the older buildings, you may have found inconveniences such as separate cold and hot water taps, which make it very difficult to wash with warm water. The house I grew up in outside New York City had these old taps from 1928, so I am all but too familiar with how challenging they are to use.

Some of the older hotels and apartments required that you deposit a British pound coin into a controller that would then heat the hot water 30 minutes later in order to take a warm bath.

So yes, the residential plumbing of Old England left something to be desired. Being half British, I do not say this as an insult. After all, they were dealing with plumbing challenges before America had even been discovered by the western world.

Last, I was involved in commercial design in London for the Bishopsgate Development in the late 80s; there were still elements of Old England in their code. Every building required three water cisterns, one for domestic, one for fire sprinkler and one for fire standpipe. I don’t know if their code has changed since then, but it’s interesting to note how very old code can carry over to more modern code.