Integrated Piping System, installed at Philadelphia’s The Atlantic, is a hydronic system that uses the DHW hot and cold piping to provide four-pipe HVAC performance at a dramatically lower cost.

Being lauded as Philadelphia’s “Billionaire’s Row,” the area surrounding the intersection of Spruce and South Broad Street is steeped in the arts. Over the past few years, the region has witnessed a modern housing renaissance. Several mixed-use buildings have been converted to ultra-high-end residences, but none as notable at The Atlantic.

Flanked by The Merriam Theatre, The Kimmel Center for the Performing Arts and The University of the Arts, The Atlantic’s rich history began in 1922 as the headquarters of the Atlantic-Richfield Oil Co. The 22-story building, however, now houses 228 apartments and is certified LEED Gold, the likes of which have few equals in The City of Brotherly Love.

Post Brothers, a multifamily property development company based in Philadelphia, owns and operates The Atlantic. At the onset of the daunting renovation project, architect Rafael Vinoly was chosen to bring the 100 year-old building back to its Beaux-Arts splendor. As project goals, creating every element of exquisite urban living was accompanied by the desire to provide the highest levels of environmental sustainability.

“Water source heat pumps are certainly efficient enough to attain LEED GOLD, but by suggesting an IPS system, we presented Post Brothers with an option to save money while increasing performance,” Maun explains. “Greater sustainability at a lower cost was very attractive to them.”

IPS is a hydronic piping system that utilizes the domestic hot and cold water piping for water delivery to proprietary HVAC terminal units.  The piping system can serve double duty because all components are NSF 61-certified.

Advanced Engineering, an MEP and fire protection engineering firm in Philadelphia, was tasked with the system design. In business since 2002, half the company’s work is in Philly, while the other half is scattered around the country. In recent years, they’ve carved a niche in the multifamily housing market by converting and completely rehabbing a series of large, old buildings into high-end apartments and condos. This has created a strong portfolio that applied to the work at The Atlantic.

“Post Brothers approached us with the idea after learning about IPS from Chuck Maun,” says Jerry Fink, one of three partners at Advanced Engineering. “We had never designed an IPS system before, but we had worked with Post Brothers on a number of projects and wanted to explore the idea. After considering the project objectives and comparing all costs involved, IPS became the basis of design.”

Mechanical contractor Worth & Co. Inc., Pipersville, Pa., installed the systems over the course of the year-and-a-half renovation. Not only are IPS systems energy efficient, but the unique design saves space and raw materials while lowering upfront, operating and maintenance costs.  They function just like a four-pipe hydronic system with the additional benefit of economizer cooling. 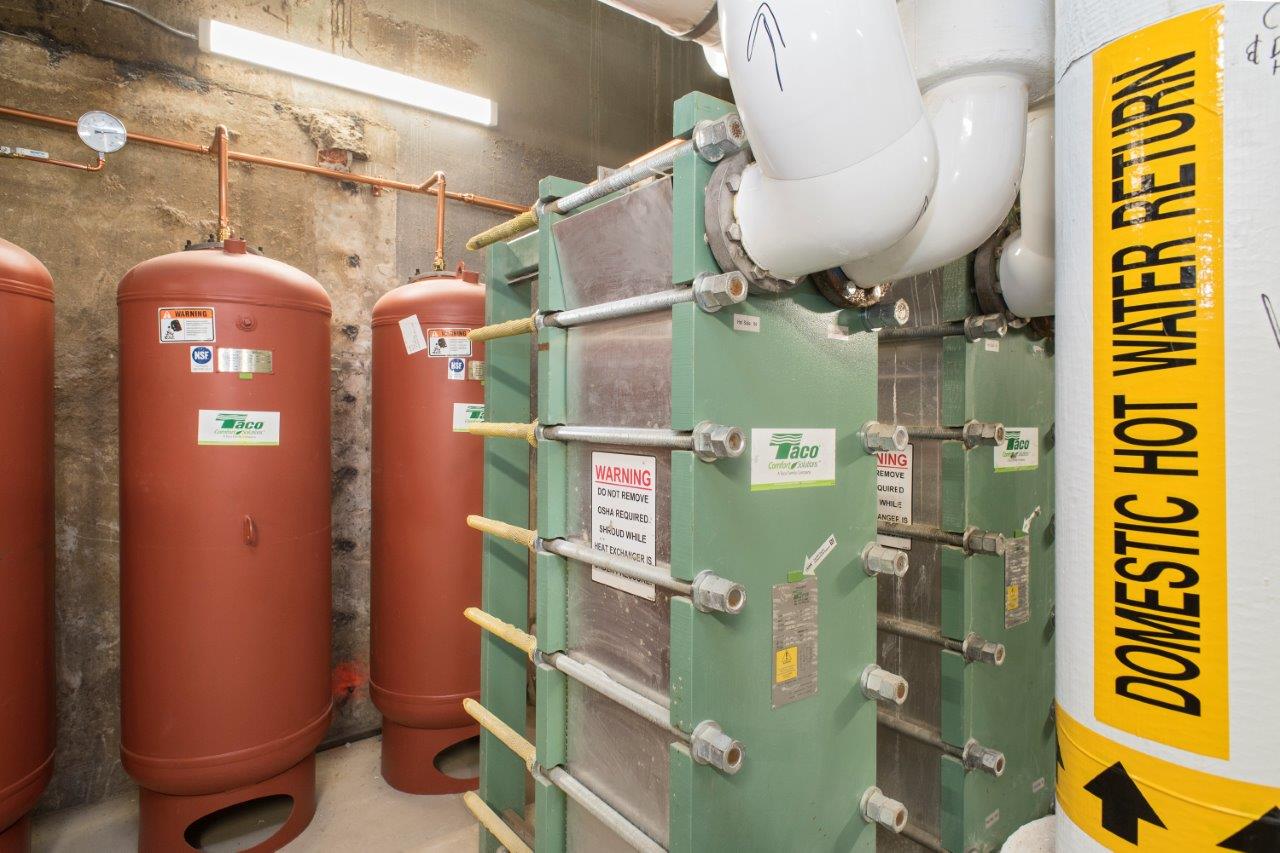 In this application, 120-degree water from the domestic hot line is introduced to the fan coil unit via a zone valve when the room’s thermostat calls for heat. After passing through the potable-approved heating coil, water is returned to the building’s recirculation line. The system’s cooling function works in similar fashion. Adding a full-size domestic cold water return to get a true four-pipe system has minimal first-cost impact.

In the case of The Atlantic, the Williams’ fan coil units range in size from one- to five-tons, with the largest units serving common areas and mixed-use spaces.

Williams pioneered the IPS system and has perfected the IPS fan coil design. Over the past 12 years, these systems have been installed in over 170 buildings throughout the U.S.

The hideaway-style fan coils used throughout The Atlantic feature a ducted supply and ducted return, though various configurations are available from Williams. Aside from those in common areas, each terminal unit is equipped with an individual thermostat, providing occupants with complete control of their environment. The architect used long, slim registers to supply air to each space, maintaining the modern appearance.

Because potable water passes through the fan coils, the units must be NSF 61-certified. The fact that the plumbing lines serve water fixtures and the terminal units dramatically reduces installation cost and time, while providing the comfort and controllability common to four-pipe fan coil systems. As such, IPS systems can provide simultaneous heating and cooling in adjacent zones.

Not only is piping material and labor minimized, but all hydronic equipment expenses are dramatically reduced (pumps, etc.) without forfeiting any of the comfort and efficiency advantages inherent to hydronic systems. IPS systems also offer energy efficiency levels that rival any other commercial HVAC system on the market, and provide the opportunity to capitalize on economizer cooling (free cooling).

The utility cold water provides unaided cooling so long as it enters the building at or below 62 degrees. This is called economizer cooling. When utility water is not cold enough to entirely satisfy the cooling demand, chillers are used to supplement cooling capacity to the cold-water recirculation loop. To ensure safety of the potable water, the chiller is isolated from the domestic water via a double-wall, stainless steel heat exchanger.

In essence, IPS offers the efficiency and energy savings of a green system, but the affordability of a low-tech packaged terminal air conditioner solution without placing noisy, maintenance-heavy components within the occupied space.

Aside from NSF 61-certified fan coil units and a multipurpose piping design, the mechanical components at The Atlantic look quite similar to what might be found in a water source heat pump or four-pipe fan coil installation.

Supplemental cooling is provided by a 750-ton REYMSA fiberglass cooling tower and a pair of 375-ton Dunham Bush screw compressors.

At The Atlantic, three large condensing boilers generate hot water for a large storage tank. Water is tempered down to 120 degrees before it’s supplied to the building for heat and DHW. A pair of large Taco Comfort Solutions plate and frame heat exchangers are used between the boilers and the storage tank. These heat exchangers were selected because they were one of only a few rated for the high pressure needed in the building; 300 PSI at 6-inch inlets.

Of course, all of the supply and return piping throughout the building is also NSF 61-certified. Pipe between 3 and 10 inches is 304 stainless steel. Copper was used on anything under 3 inches, and Victaulic fittings were used for all pipe fittings, whether stainless steel or copper.

In the event that there’s no call for heat or cooling for an extended period of time, Williams’ exclusive control board features a coil purge timer. Per ANSI standard, the control opens the coil’s zone valve for a brief period each day to eliminate the possibility of stagnation within the system. 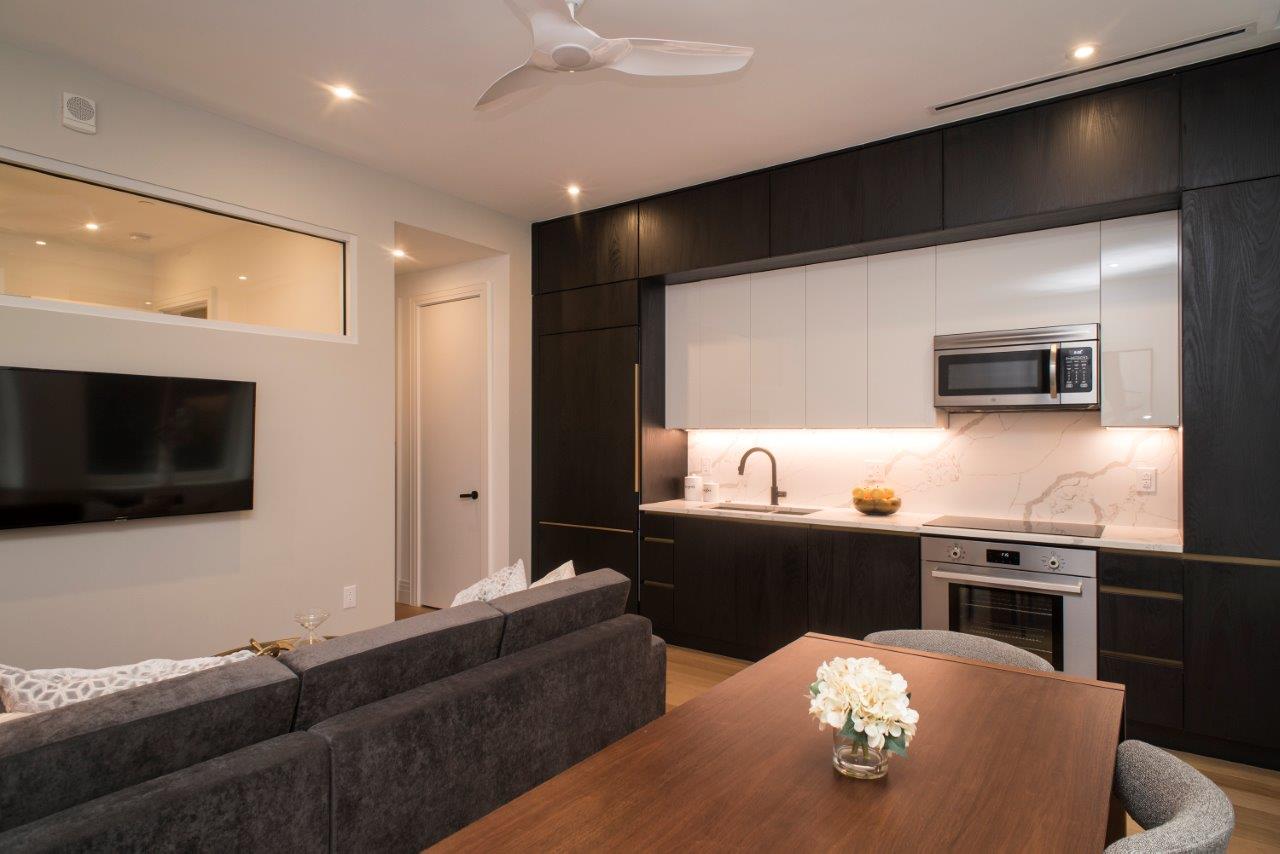 “A true four-pipe system would have been cost prohibitive,” Fink adds. “The IPS design allowed us to use a four-pipe fan coil approach, and the economies of installation made it competitive with other system types we were considering. It also yielded LEED points while creating an extremely quiet, comfortable indoor environment.”

The end result is a LEED-friendly heating and cooling system that provides significant savings.  IPS systems are ideal for hospitality, assisted living, condos, apartments, or any other facility that’s occupied around the clock.

“We never saw the hard copies of the original design,” Maun explains. “However, we understand that the upfront cost savings provided by the Williams IPS system, when compared to the original WSHP design, were around $900,000. That’s only the beginning, though. IPS systems are inherently inexpensive to maintain and operate, compared to any other commercial HVAC systems. They also feature the long service life that can be expected from any hydronic system.”

The design professionals at Advanced Engineering are now working on an eight-story, mixed-use building in Allentown, Pa. The facility had been entirely office space when constructed. Now, four of its floors are being converted to multifamily living space. Fink proposed an IPS design for the residential portion of the building.

“We surveyed it and met with the owner team,” Fink says. “They seem very interested in IPS. We’re completing the schematic phase within weeks, at which point we’ll outline our system approach with IPS.”

In effect, the building already has a central plant. Chillers and steam boilers are paired with VAV boxes. Fink’s idea is to leave the existing system in place where the building will remain office space.  The areas being converted to living space will require a completely new plumbing system anyhow, so why not use NSF 61-certified components and kill three birds with one stone; plumbing, heating and cooling?

“In this manner, we can install separate fan coils in residential spaces,” Fink adds. “We can provide low-noise, efficient, comfortable heating and cooling at a reduced cost.  If I hadn’t been involved with an IPS project at The Atlantic, I wouldn’t be as educated on the advantages that it can bring to a project like this.”