It continues to require the promotion and training of utility workers impacted by this legislation to work on thermal energy projects. The bill requires the use of labor agreements with bona fide labor organizations, giving preference to those who have been displaced by the reduction of natural gas consumption, distribution infrastructure and building construction.

As early as 1990, when asked what it would take to facilitate widespread adoption of geothermal heat pump technologies, I shared that a utility network of hydronic pipelines (similar to water and sewer mains) would need to be in place to facilitate utility hookups to building HVAC systems. More than 30 years later, New York has seen the passage of S 9422, perhaps the first of its kind in the United States.

S 9422 states that without this action, even if utilities wanted to install thermal energy networks, they could not. The authorities having jurisdiction (AHJs) over energy utilities (usually known as public service commissions) allow only the sale of specifically identified energy commodities such as electricity and natural gas. Without a change to the local and state laws, widespread adoption of geothermal infrastructure was not possible. Now, that is all changing, starting in New York. 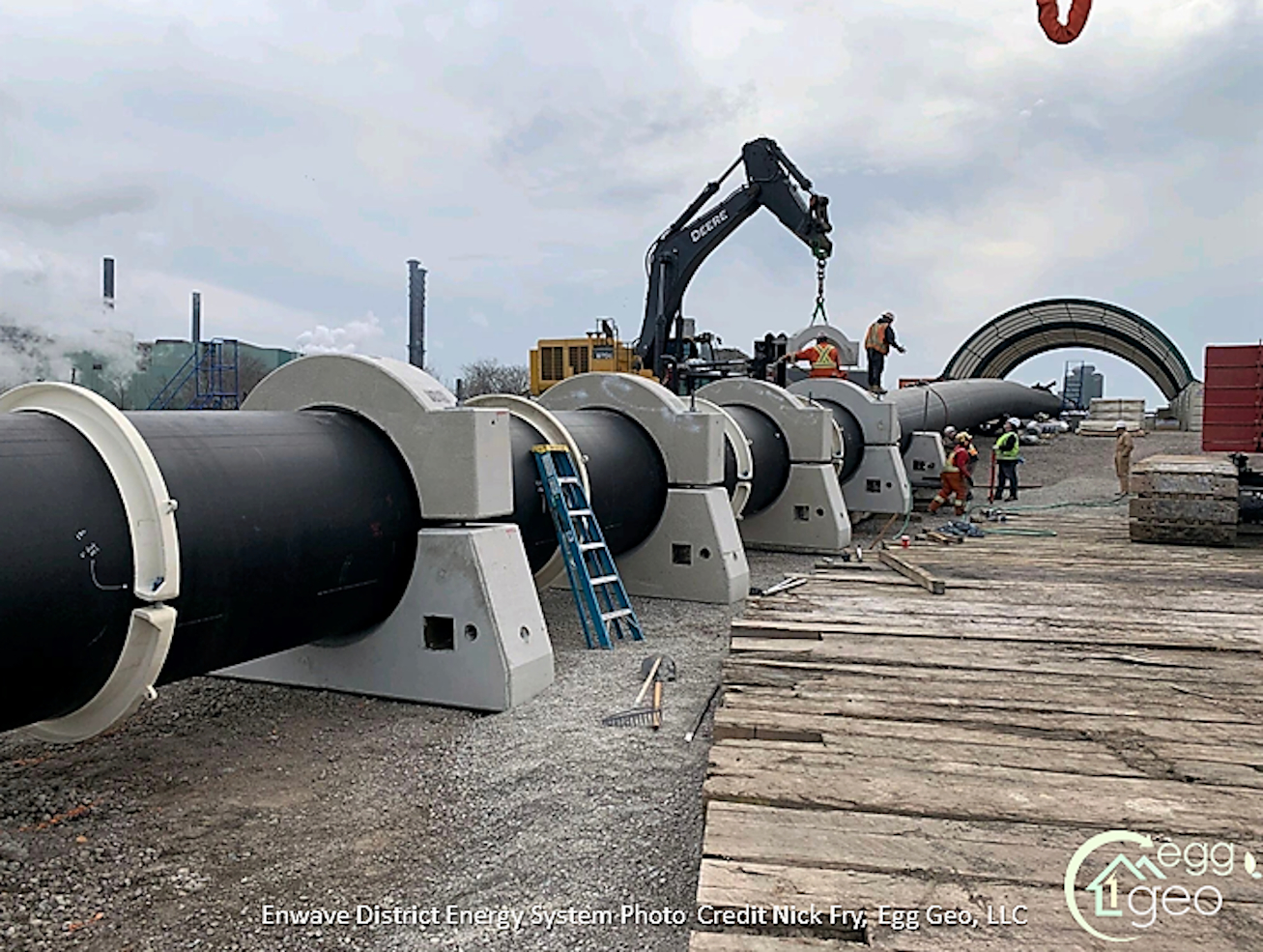 The Road to Passage

It started in 2015 when I (Egg Geo) was invited to be on the technical committee for the International Association of Plumbing and Mechanical Officials (IAPMO) as they wrote a new manual called the ANSI USHGC 1-2018/Uniform Solar, Hydronics and Geothermal Code. Shortly after passage of the standard, Egg Geo was accepted as a technical committee member on the Uniform Mechanical Code (UMC) committee, which added a geothermal energy systems chapter to the present 2021 UMC code.

Presently, we are working on thermal energy networks verbiage with a select committee for the 2024 UMC.

In 2017, working with the New York State Energy Research and Development Authority (NYSERDA) and the New York Geothermal Energy Organization, Egg Geo was engaged in a statewide training tour to educate architects and engineers, funded by NYSERDA. During this multiple-stop, multimonth exercise, we were informed that the Empire State Plaza, which is the New York State Capitol in Albany, was moving forward with an $88 million combined heat and power (CHP) plant.

Egg Geo was engaged by local activists and worked to help inform the New York Power Authority, the Office of General Services and other state entities that this CHP plant would be outlawed by New York state’s own carbon reduction laws long before its useful life was completed.

We had the challenge of proving the viability of geothermal exchange to nay-sayers. This was a tremendously difficult challenge requiring many trips to New York, writing and publication of supporting articles and other extensive efforts. It was accomplished without compensation to Egg Geo and other renowned entities that put their best efforts forward (http://bit.ly/2TpH00P).

In 2019, Egg Geo was nominated for the Constellation Prize for Policy Change for our successful effort with the Empire State Plaza (https://bit.ly/PolicyImpactContellationPrize). When an article came out in Renewable Energy World about the award, I was contacted by John Murphy, business manager for the United Association of Journeymen and Apprentices of the Plumbing and Pipefitting Industry of the United States and Canada (UA) in New York.

John wanted to know if his tradespeople could be upskilled to install geothermal energy networks, which began a productive collaboration. Our involvement in IAPMO’s UMC committee proved to be a catalyst for this alignment because the UA had several members on the UMC and Uniform Plumbing Code (UPC) that already knew of Egg Geo’s stability and contributions to the industry.

During this time, the Home Energy Efficiency Team (HEET) in Massachusetts had been working very hard with local utilities Eversource and National Grid to stem the tide of leaking natural gas lines, and placement of pilot projects to engineer and install thermal energy networks in the state. The team at HEET provided a road map for New York’s efforts. 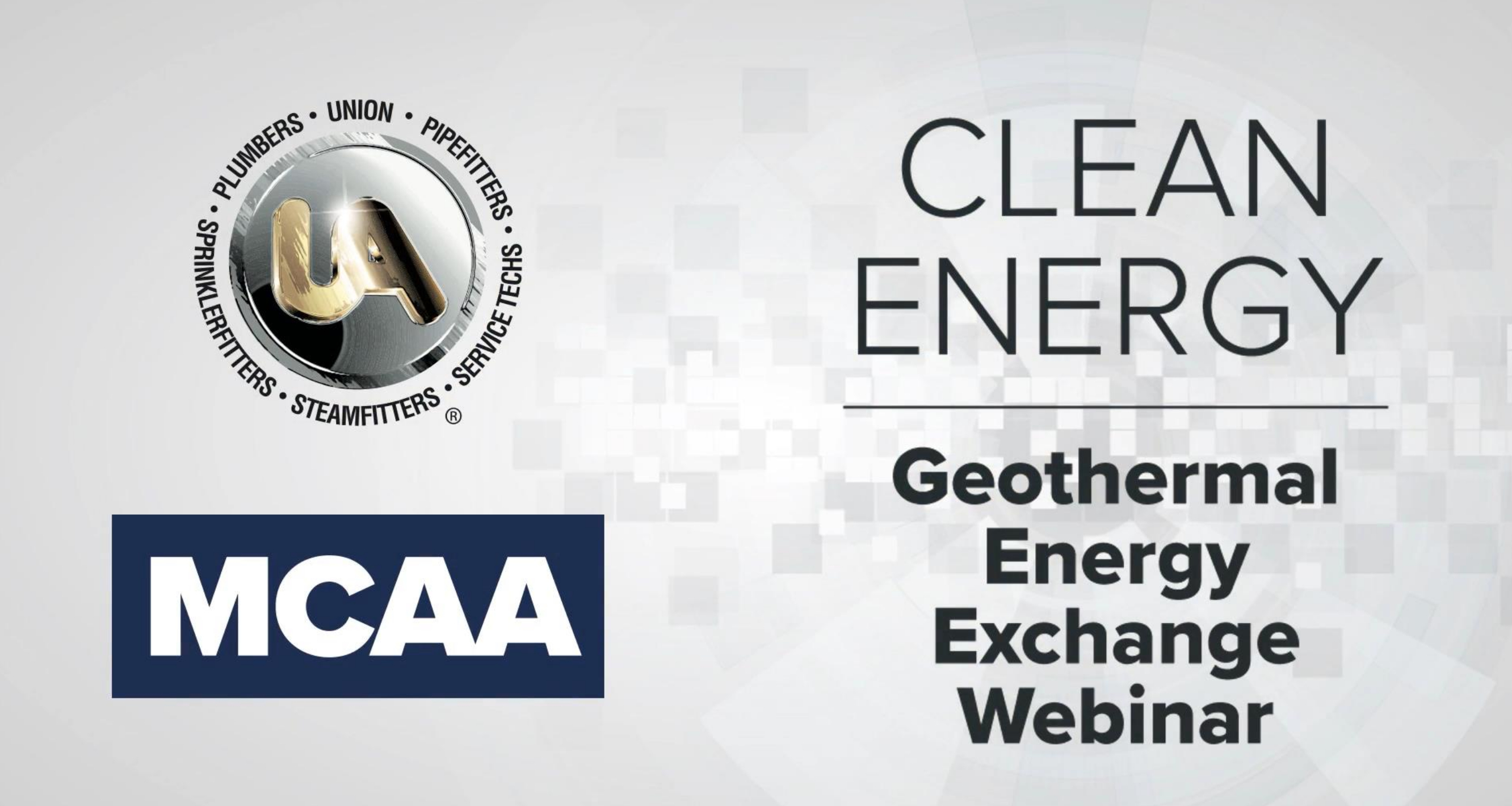 The UA contracted Egg Geo to develop a curriculum for plumbers and pipefitters to help cross-train their workforce from installing and servicing boilers and furnaces to installing and servicing geothermal heat pumps, chillers and ambient temperature thermal energy networks. Our first presentation was given in Chicago in October 2021 to UA Local 130.

Present were the UA’s national training managers, as well as other high-ranking officers, political officials and trainers from around the country. The training was re-recorded by the Mechanical Contractors Association of America. This five-minute video provides a summary and unequivocally confirms the UA’s support of building decarbonization and electrification through thermal energy network implementation.

During the tour, we were invited by Jared Rodriguez (party to the Empire Building Challenge funded by NYSERDA (https://on.ny.gov/3nG4sVS)) to meet at the NYSERDA tower to discuss programs that could benefit labor unions. This all-day meeting apparently cemented the idea that labor unions could get 100% behind decarbonization and building electrification through the implementation of thermal energy networks statewide.

In April 2022, Murphy pulled in Lisa Dix (New York director at Building Decarbonization Coalition), Jessica Azulay (program director at Alliance for a Green Economy) and Lisa Marshall (program director at HeatSmart Tompkins) to begin talking about the possibility of introducing the thermal energy networks and jobs bill to the state legislature.

Kristy Egg and I were in a hearing for the 2024 UMC at the time; we were told we must find time to meet about drafting this bill because the labor leaders would not meet without our input. The subsequent meeting took place on May 5, 2022, and was the first of many (almost daily) meetings that resulted in the passage of Senate Bill S 9422 (https://bit.ly/3xmMkVv) on June 3, 2022. 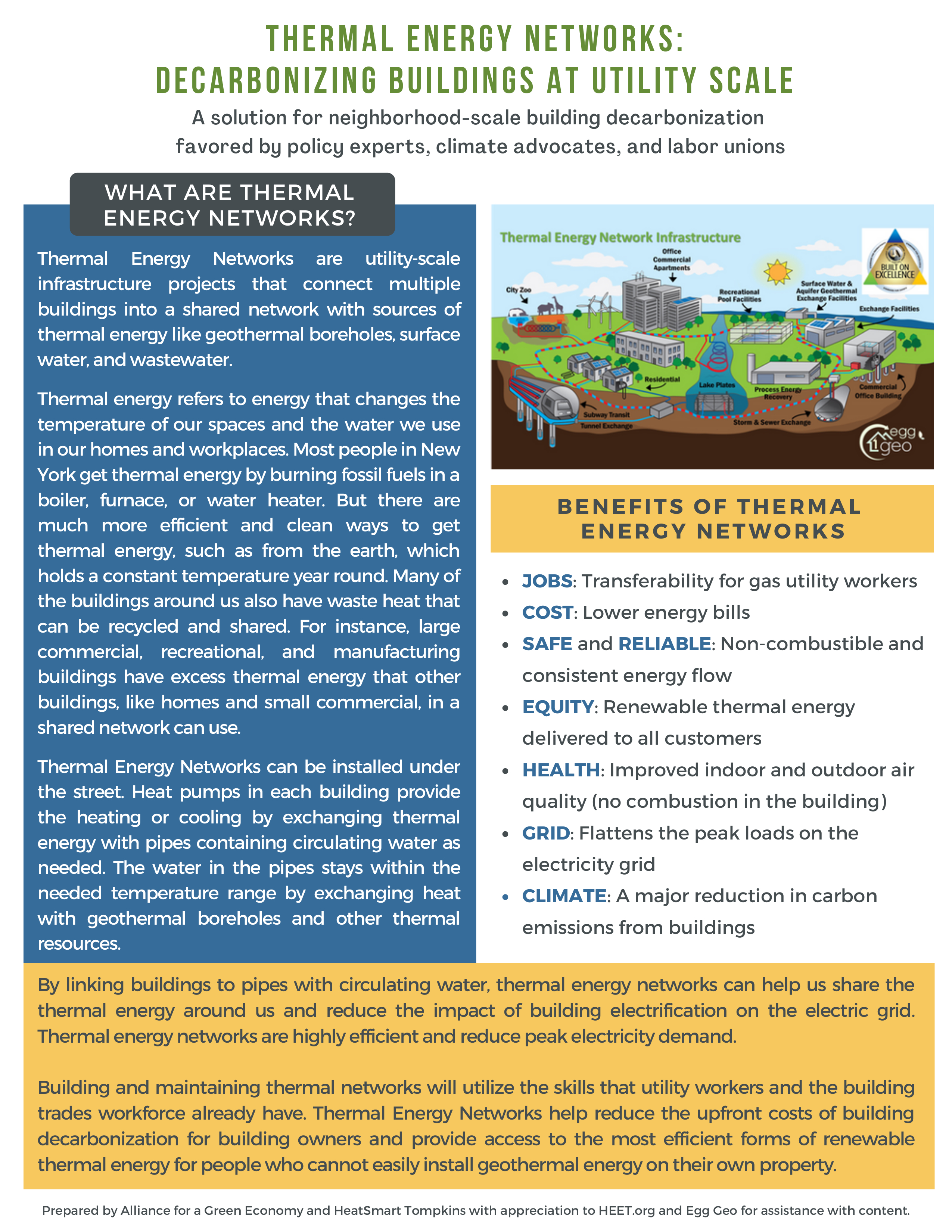 Egg Geo provided the following definitions, which were placed into the bill (www.nysenate.gov/legislation/bills/2021/s9422):

“28. ‘Thermal energy,’ when used in this chapter, shall mean piped noncombustible fluids used for transferring heat into and out of buildings for the purpose of eliminating any resultant on-site greenhouse gas emissions of all types of heating and cooling processes, including, but not limited to, comfort heating and cooling, domestic hot water and refrigeration.

“29. ‘Thermal energy network,’ when used in this chapter, shall mean all real estate, fixtures and personal property operated, owned, used or to be used for or in connection with or to facilitate a utility-scale distribution infrastructure project that supplies thermal energy.”

During the weeks coming up to the passage of the bill, an Op-Ed was published in New York (https://bit.ly/OpEdThermalEnergyNetworks), and a market investment article was published in S&P Global Market Intelligence (https://bit.ly/SandP_ThermalEnergyNetworks). Both articles give great insights into where thermal energy networks will be taking New York — and indeed the United States — in the coming months and years.

If you aren’t already involved in geothermal heat pump technologies, now is the perfect time. It would take volumes to lay out all the advantages of this technology. Suffice it to say that geothermal heat pumps connected to thermal energy networks are the path forward as we decarbonize and electrify our building stock.