Among the most iconic buildings in Washington, D.C., the Corcoran School of the Arts & Design is located on the Ellipse across from the White House. The grand beaux-arts building, designed by Ernest Flagg and constructed in 1897, was placed on the National Register of Historic Places in 1971. Many of the interior spaces were also landmarked in 2015.

Flagg designed the building in the classical tradition of European galleries, with a large central atrium or colonnade featuring an array of Doric and Ionic columns and elegant neoclassical details. For more than a century, the building welcomed patrons to view the collections of the Corcoran Gallery, one of the city’s premier institutions for the arts.

In 2014, George Washington University bought the 169,600-square-foot building to create a new home for the university’s arts program. Almost simultaneously, the National Gallery of Art (NGA) purchased the former Corcoran Gallery’s collection, worth $2.4 billion, with plans to return and display the collection in the historic building. 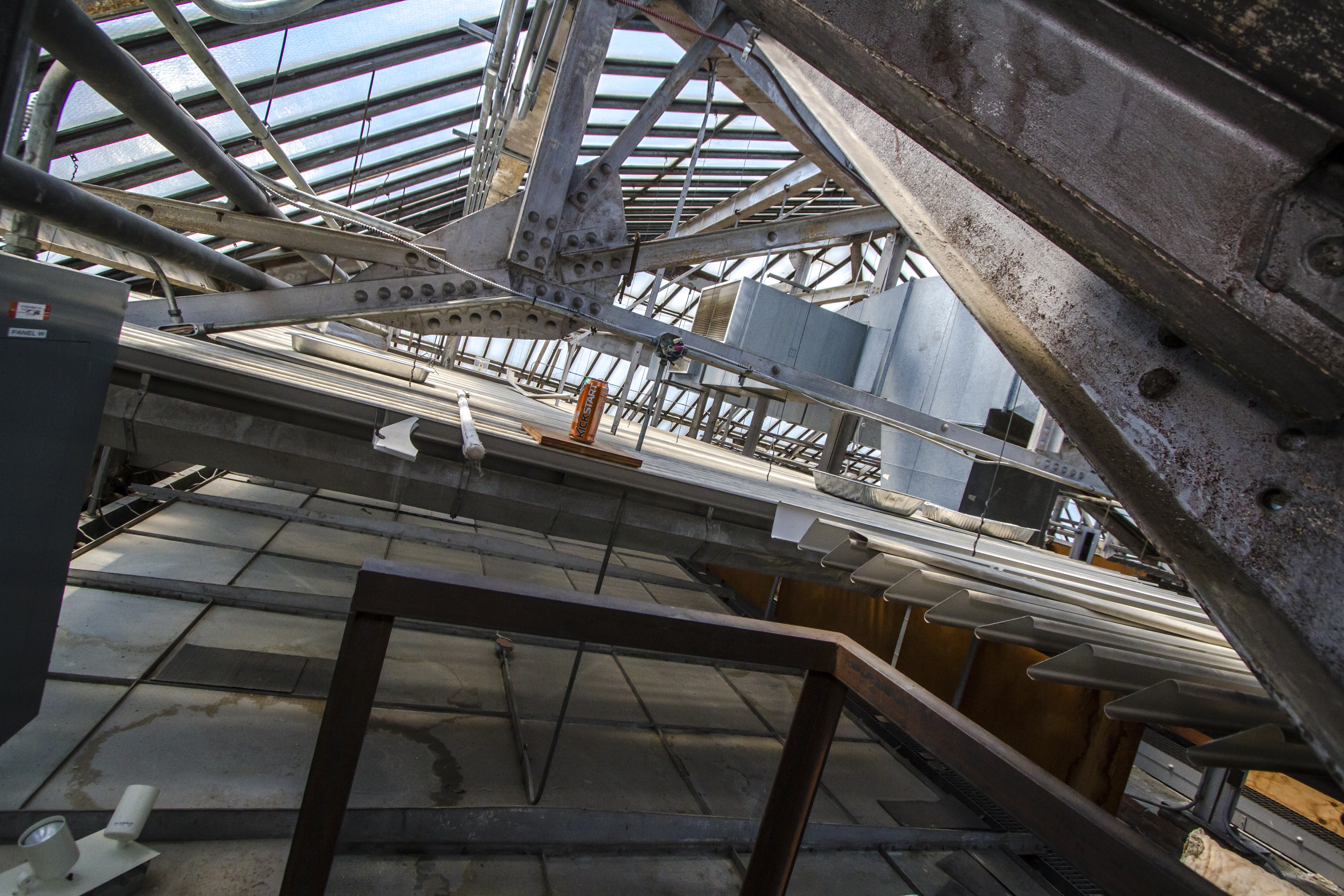 University administrators recognized that a significant renovation was needed to meet modern code, ADA and educational programming requirements. Central to the rehabilitation would be the creation of modern, light-filled classrooms and studios; expansive fabrication and exhibition space; new HVAC and plumbing systems; updated fire suppression and life safety systems; and accessible ramps, restrooms and elevators. In addition, these upgrades had to meet the NGA’s rigorous climate control standards. 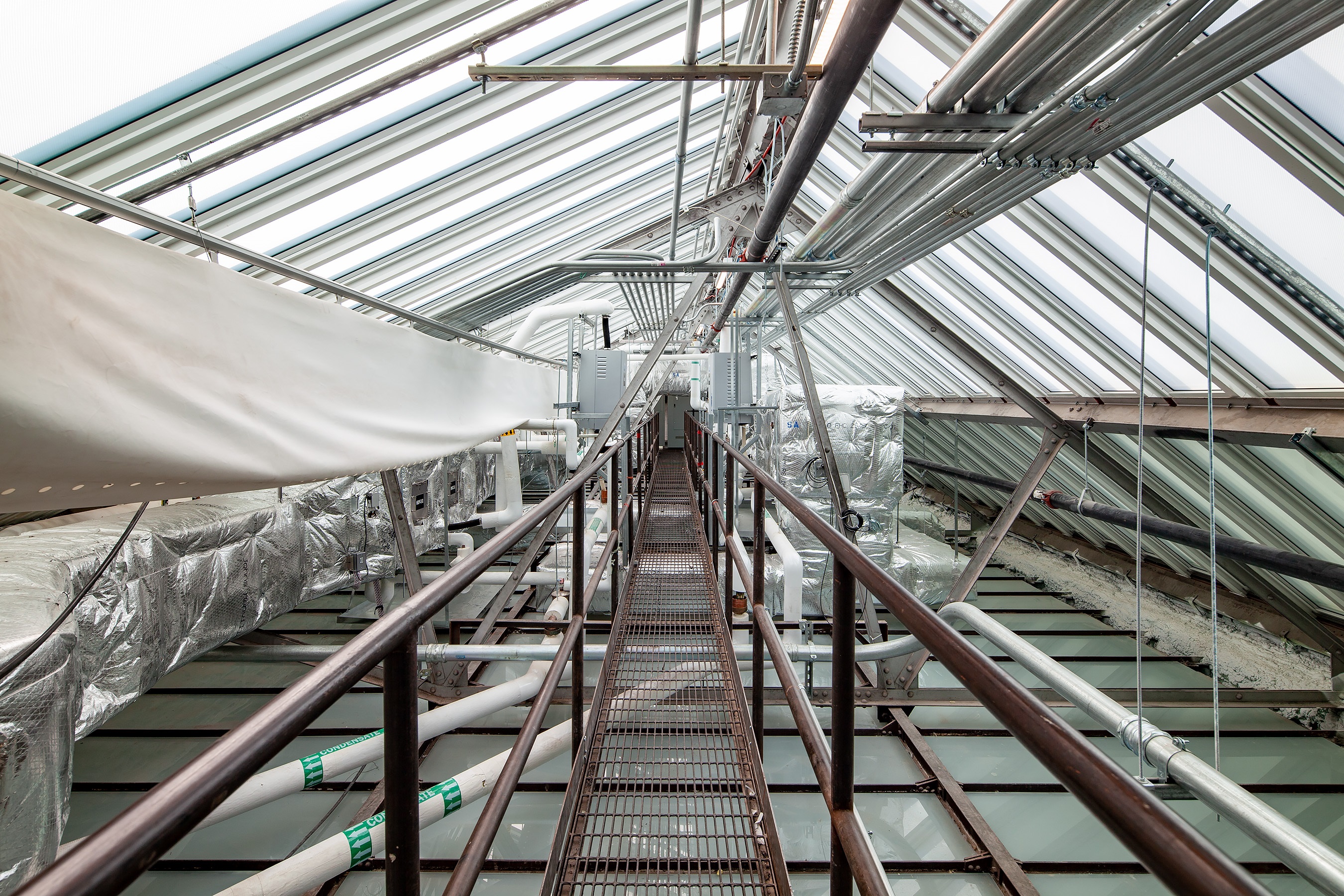 The university tapped the team of Leo A Daly as the architect of record to lead the high-profile modernization, working with Mueller Associates for mechanical, electrical and plumbing engineering; GHD for fire suppression and life safety systems design; and Robert Silman Associates for structural engineering. The Whiting-Turner Contracting Co. served as construction manager.

The team’s first challenge involved understanding existing building conditions. There were very few records or drawings of the building’s original design and construction, with only a few torn and weathered floor plans discovered in the building’s basement. Multiple renovations through the years resulted in a jumble of active and abandoned pipe, conduit, wires and ductwork — often unlabeled or mislabeled.

• Laser scanning and the development of a 3D point cloud model helped reveal details of the building’s interior construction, saving trips to the site and allowing for a more efficient design process.

• A hygrothermal wall analysis measured the effectiveness of the wall material as an insulator (U-value).

• Computational fluid dynamics modeling aided in the design of the mechanical systems.

• Ground penetration radar scanning assisted in locating structural components and identifying locations for additional supports. The radar identified locations of the wires and tie rods within the circa-1890s

“Metropolitan Floor System” to avoid cutting the wires for new penetrations, ensuring that the structural integrity of the slab was maintained.

• CCTV camera surveying within pipe interiors assisted in locating and determining the condition of the existing below-slab piping for the plumbing systems.

The data ecosystem generated through these technologies proved crucial to designing the new and upgraded building systems. The extensive CCTV camera surveys of the pipe interiors, for example, enabled the team to better understand the location and condition of the century-old below-slab gravity piping.

The building used a combined storm and sanitary sewer system. To ensure the building met the International Plumbing Code (2015 edition) sections 703.6 and 1109.1, the systems had to be separated. This required that all of the areas where the piping systems were interconnected be located, intercepted and routed to either the dedicated stormwater or dedicated sanitary system.

Mueller removed the underslab piping in certain areas and provided new dedicated sanitary and stormwater mains. The piping was intercepted above the floor slab and separated into separate dedicated systems in other locations.

In addition, pipe sizes were not reduced. They were either maintained or increased. Increased pipe sizes on the sanitary system were often due to increased fixture quantity in the building. Stormwater size was analyzed and sized to ensure that the system pipe sizing complied with the current IPC sizing requirements. 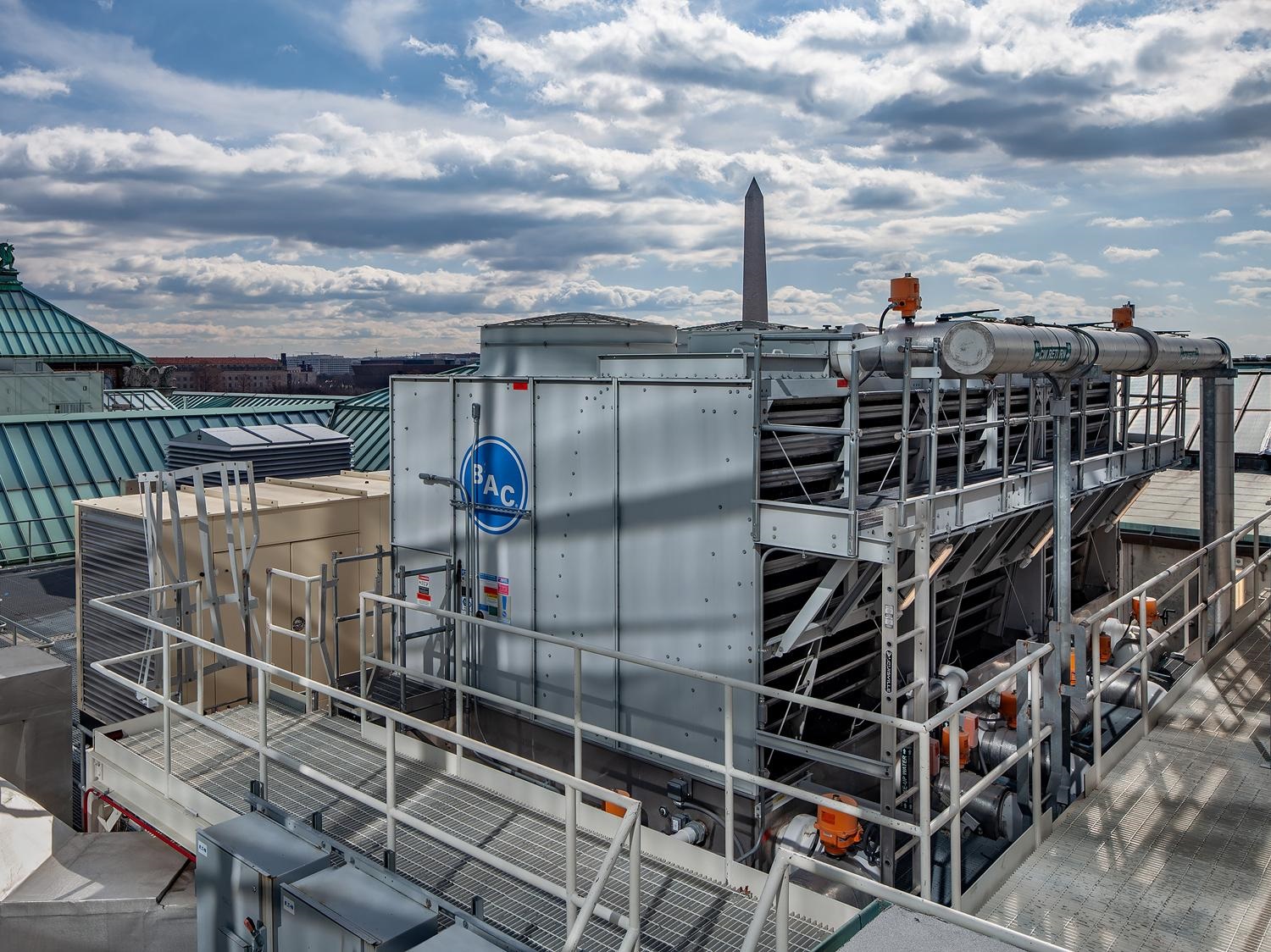 Moreover, the subbasement was a dense maze of piping and ductwork —difficult to walk through and assess — making the investigation and retrofit all the more challenging.

The information from the CCTV camera surveys helped the team determine the piping’s location and distance below the building’s slab, which prevented unnecessary and potentially destructive interventions to the building’s historic fabric and the integrity of the structural slab. The information proved critical to minimizing the contractor’s trenching work in the courtyard to replace the combined storm and sanitary sewer piping with separate systems.

The building also needed to be brought up to code in terms of the number of toilet room fixtures. New fixtures entailed automatic, sensor-operated (hands-free), low-flow fixtures (water closets, urinals and lavatories). The building had multiple domestic water feeds; however, these were inadequate to serve the new fixture quantity.

This requirement involved the replacement of two existing meters with one new service and a meter in a new location. The phased nature of the project — essential while the building remained occupied — meant that the engineering team needed to back feed this service so that no area would be cut off, even in areas that had not been renovated yet.

The first significant phase of construction focused primarily on the building’s infrastructure, including the new domestic water service and the addition of centralized domestic water heaters. Much of the piping was distributed, with valves and caps left for connections during the subsequent stages.

This aspect of the project required extensive planning and coordination with Mueller’s HVAC engineers and Silman’s structural engineers regarding where the piping penetrations should go and to co-locate services in tight spaces to maximize available headspace. Here, the point cloud was a valuable reference, providing information on points of connections and existing conditions, including ductwork and piping that had yet to be renovated. The technology significantly reduced the need for site visits.

While the Corcoran’s modernization has proven transformative throughout the building, the makeover of the subbasement was a highlight for the engineering team. The dim and crowded space is now larger and more organized with adequate headspace and easier access to equipment for maintenance.

The modernization required the installation of new HVAC systems to meet current energy codes. The existing steam service and associated steam and condensate systems were in poor condition.

Mueller was challenged to fit the new, larger mechanical equipment into the minimal space available. For instance, space was extremely restricted in the building’s attic. New equipment could not block the natural daylight into the galleries or create shadows impacting the viewing of art in the exhibition areas below. The design carefully threaded the equipment, ductwork and piping through the attic in the limited places outside the view planes of the original lay lights and skylights in the historic structure.

A sightline easement also prevented the installation of a large mechanical penthouse on the roof. Mueller’s engineering team designed a multilevel equipment platform within the courtyard that houses multiple air-handling units, a generator and an egress stair tower allowing access for maintenance.

Below the elevated platform, outdoor units associated with a variable-refrigerant flow system with heat recovery serve the basement studios and classrooms and outdoor dust-collection units for the subbasement metal and wood shops.

The Corcoran is not only an academic building for George Washington University’s School of Arts and Design; it is also a public museum that displays art from the NGA collection. Mueller’s engineers developed several creative solutions to meet these dual needs. Understanding that the NGA would continue to use the building’s historic galleries to host traveling art and other exhibitions, Mueller’s design team proposed solutions that addressed the NGA’s stringent air and light quality requirements for the art galleries.

However, decades of deterioration complicated efforts to design mechanical and wall-system improvements to meet the NGA’s environmental standards. The building’s skylight system had sprung multiple leaks. Much of the uninsulated exterior stone walls allowed excessive air and moisture infiltration and exfiltration with inadequate thermal control. Where leaks were not coming from the exterior, they came from unidentified piping and ducts.

Mueller’s team used hygrothermal wall analysis to analyze the building’s envelope for air leakage, moisture ingress and degradation of the building envelope. Then, the team incorporated computational fluid dynamics modeling to determine whether MEP and architectural design solutions would achieve the NGA’s criteria. This iterative process continued until NGA’s goals were met.

The renovation of the Corcoran has earned multiple design awards and created a vibrant space for active learning, with specialized studio environments, labs, classrooms and galleries.

“The success of the project was based on the careful planning and collaboration between the plumbing design engineers and the construction team,” says Andrew Graham, AIA, senior architect with Leo A Daly. “Surveying the existing systems with closed-circuit video cameras revealed unknown pipe connections while minimizing investigative demolition — a major plus in a historic renovation.”

Rather than attempt to remove the 120-year-old ornamental plaster ceiling, piping follows the curves of coves and moldings, artistically blending into the architecture. To meet student demand, new plumbing fixtures were added while not significantly reducing usable space.

“The plumbing discipline is an often overlooked and yet key component of all building systems’ proper design and function,” Graham continues. “Because of its broad connection to all systems and its placement throughout the project, it played a pivotal role in the project’s successful delivery.”

Karen Schulte, PE, CPD, LEED AP BD+C, is a project manager and mechanical engineer specializing in the design of plumbing systems for cultural and higher education facilities. A graduate of Penn State University with a degree in architectural engineering, she joined Mueller Associates in 2006. Karen is active with the Baltimore Chapter of ASPE, and is a registered engineer, LEED accredited, and a Certified Plumbing Designer. She can be reached at kschulte@muellerassoc.com.