Listening is a Sales Tool

Asking the right questions and listening to your clients will allow you to diagnose and repair the problem, not just a symptom of the problem.

I am continuously reminded that asking the right questions, being open-minded and listening to the customer is an outstanding sales tool. It also ensures that I have the information I need to deliver a product exceeding client expectations. Selling more product and over-delivering is a pretty sustainable business plan.

I recently employed this ground-breaking tactic (tongue firmly in cheek) in Collegeville, Pa., when a pool builder referred me to a customer of his who had issues with a four-year-old pool heater.

A few years ago, my company, Patriot Water Heater, made a move to all hydronic. We even created two new brands, EcoDronics and Patriot Pool Heating Co., to address our two niches. EcoDronics is our “unconventional” hydronic brand; think greenhouses, snowmelt, etc. Patriot Pool Heating does exactly what you’d think, but we accomplish that task with condensing boilers instead of dedicated pool heating units.

Or at least that’s how it’s supposed to work.

The 250-MBH, LP-fired pool heating unit was failing due to improper installation. It was a Category 3 appliance, vented through a chimney. To make matters worse, it was common-vented with a Category 1 appliance; a nearby LP boiler for space heat. When the pool heater (fan assist) turned on, it would force its flue gas into the combustion chamber of the nearby natural-vent boiler, ultimately corroding the four-year-old boiler.

After seeing the two appliances common-vented, I started asking questions about the whole home. What are his complaints about the heating system across the entire home? What I learned drastically changed the scope of the project. 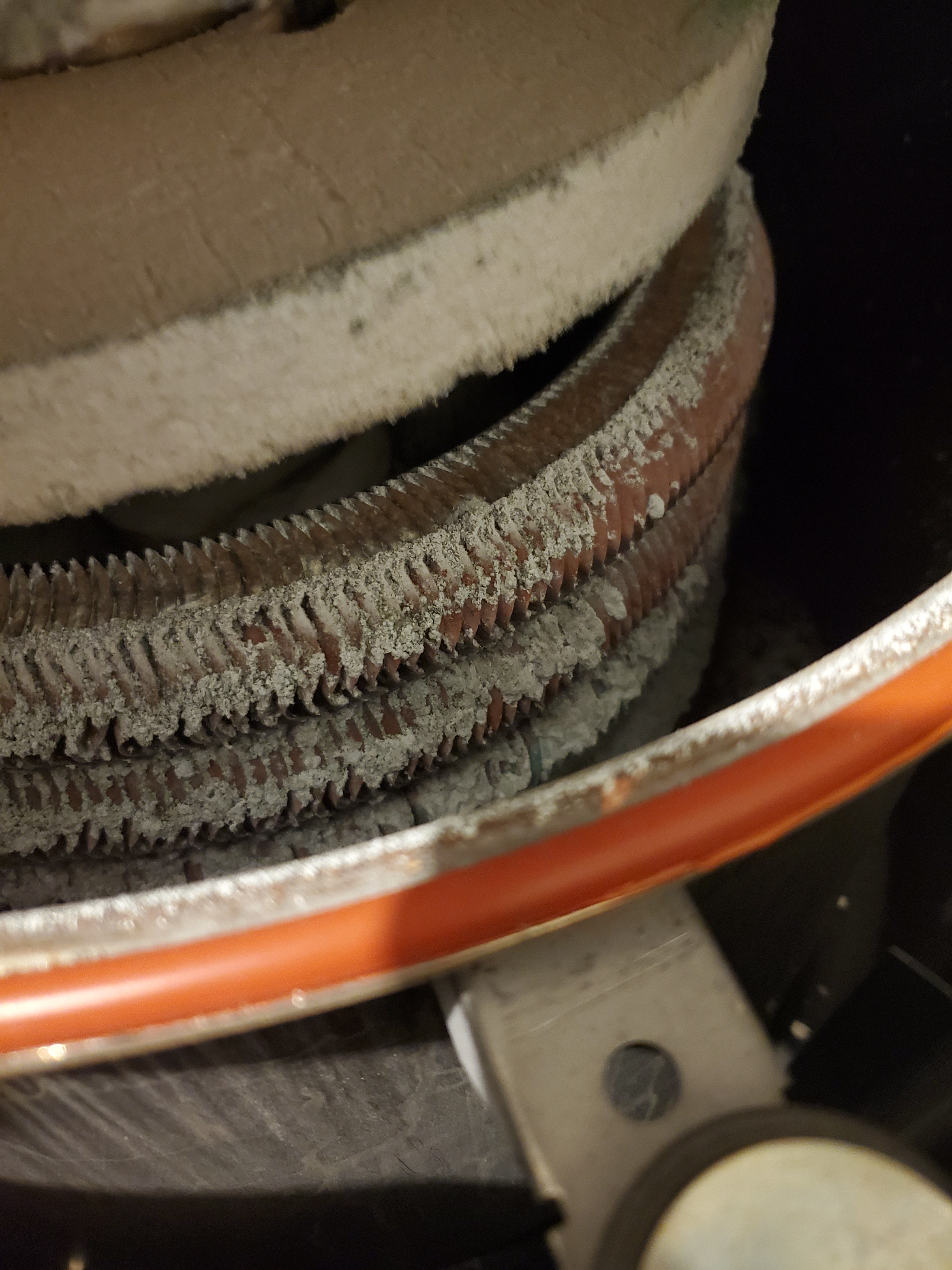 The owner told me that a second boiler (a much older, oil-fired boiler with a DHW coil) was located in a closet on the other side of the house. The LP boiler and oil boiler shared the responsibility of heating the remainder of the home via fin-tube baseboard.

Because the oil boiler was located in the original portion of the home, he experienced eight-minute wait times for DHW at some fixtures. He also hated hearing his boiler run all summer for DHW because it had a tankless coil.

The client had been looking for a whole-house solution; he just didn’t know it until I asked the right questions. Wow! And I had just been called out to look at a pool heater.

I then asked how much money he spent on LP and oil over the course of a year, and the conversation turned to energy savings in addition to comfort. Mind you, none of the existing equipment was connected to an outdoor reset (ODR) control.

By the end of our visit, the owner wisely decided to learn how we could replace all three heating appliances with a single condensing boiler. I designed the system and created a bid, which he accepted. After a few weeks of prefabrication back at our shop, we arrived at the home for a five-day install.

All the systems in the home were oversized. The total installed capacity of the three units was 450 MBH, with an average AFUE of 84 percent on their best day. After heat load calculations for space heat, DHW, dehumidification, and the pool and spa heating, we found that we needed 180 MBH. My plan included using a single K2 condensing boiler made by U.S. Boiler Co., which provides 95 percent AFUE. Potential for energy savings: high.

The new boiler was installed in the natatorium mechanical room, taking the place of the existing LP boiler and the pool heater. Beside it, we installed a 30-gallon U.S. Boiler Alliance LT indirect tank for DHW. The old oil boiler (which was installed in a bedroom closet despite local codes) was removed, giving the owner more closet space.

A prefabricated panel was hung on the wall; all zones were wired to three Sage zone panels. We piped the two radiant zones to Viega radiant mixing blocks, which have their own ODR sensors.

Grundfos Alpha ECM circulators were used to pump the zones. We used a 155 MBH titanium shell and tube heat exchanger to isolate the spa and pool from the rest of the hydronic system. Supply water temperature to the heat exchanger is determined by the boiler’s ODR to keep boiler water temperature as low as possible for maximum efficiency. Still, we use the Sage 2.3 control’s “boost” function to override the reset temperature if the bodies of water aren’t heating up fast enough.

We’ve found this to be a handy feature of the Sage boiler control, so the K2 is now the only condensing boiler we install.

A Pentair pool automation system controls the two “zones” (spa and pool) from the heat exchanger. We calculated and later confirmed we could raise the spa from 82 F to 102 F in 22 minutes. 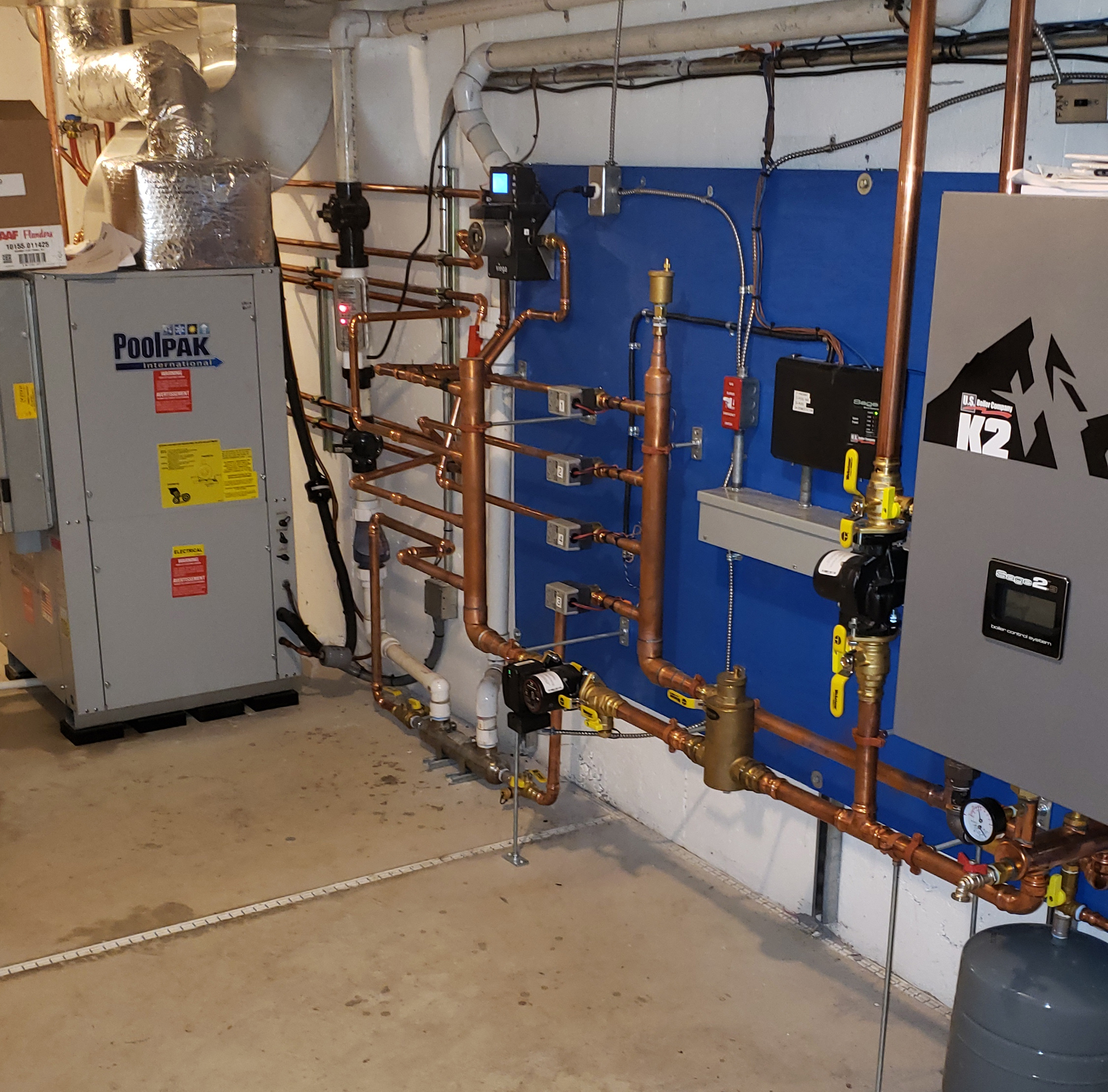 The original portion of the home is now served by a subpanel fed by the main hydronic panel. Long wait times for DHW have been resolved by using a DHW recirculation system, which also saves a lot of fresh water.

Between actual consumption data and our calculations, we estimate that the owner will save 1,000 gallons of oil and 360 gallons of LP each year, providing a total savings of about 30 percent. That estimate will likely prove to be conservative.

The home, pool and spa are now all much more comfortable, the system is quiet and there’s no wait for DHW at any fixture. The owner kept saying he was shocked by the number of details to consider and account for, as well as our attention to detail. Our ability to handle this challenge comes from prefabricating panels in a controlled environment and the fact that we listened to all his needs.

Listen to the customer. Ask lots of questions. Enter the job with an open mind. It will pay dividends eventually, if not immediately.

Tom Soukup is the principal of Patriot Water Heater Co. with more than 25 years as a hydronic designer and installer. He specializes in high-efficiency and green technology and brings his expertise to custom commercial work, pool heating and agricultural projects. Reach him at twsoukup@patriotwaterheater.com.

Contractors & Installers Hydronic Piping Systems Hydronics/Radiant
You must login or register in order to post a comment.