Understanding the ins and outs of this legacy technology will make you more valuable and help set you apart from the pack.

In the world of hydronics, the concept of hydraulic separation is still relatively young. When mentioned, most will associate it with primary/secondary or some means of isolating a boiler from the system piping. With today’s modulating boilers reaching turndown ratios of 10:1 or more and less-restrictive heat exchangers, you may wonder — is hydraulic separation still needed?

Hydraulic separation became relevant to me when high-efficiency boilers came into the picture. The idea that the boiler must have its own loop and circulator was a simple idea. These boilers contained lighter, more sophisticated heat exchangers along with very little fluid capacity. Hydraulically separating the boiler from the system and dedicating a circulator to it meant the boiler would receive the proper flow rate and live a happy life.

However, I’ve seen undeserving boilers direct-piped to heavily zoned systems and heat exchangers turn many shades of brown. In the end, twisting themselves into shapes not intended by their manufacturers all due to low flow conditions. This is not just a problem from 20 years ago; it’s still happening daily, giving hydronics and many boiler manufacturers a bad reputation.

So, despite being old enough to retire and live out its golden years tearing up the bingo halls, hydraulic separation is still just as misunderstood as my sense of humor.

The worst offender I ever had the pleasure of running into was a boiler and system piped as secondary loops with closely spaced tees off a primary loop with no circulator (see Figure 1). Not only was there no way to transfer the heat from the boiler to the emitters, there were two air separators installed on the primary loop that had no means of inducing flow. 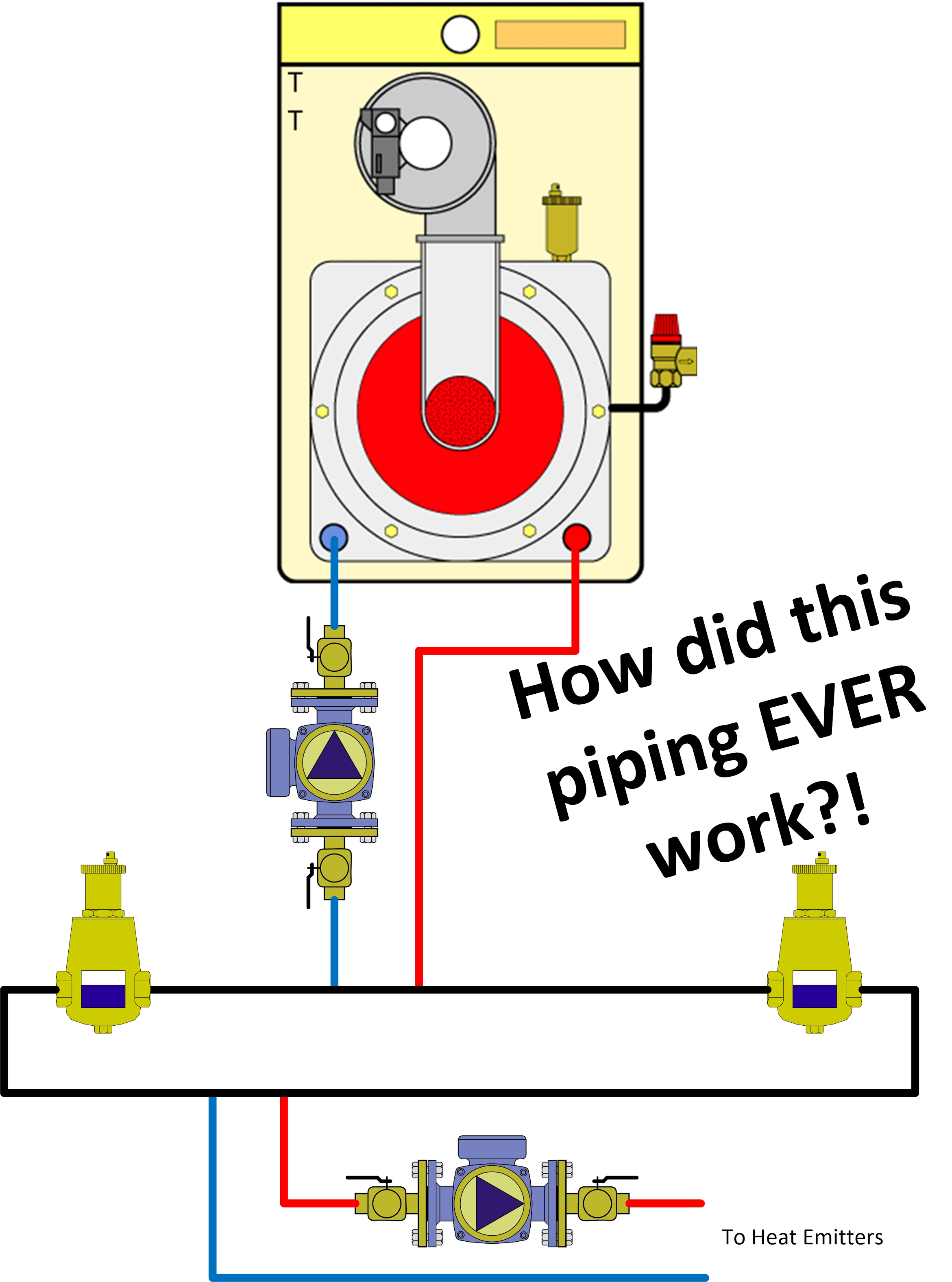 I was actually there to work on the air-conditioning system but asked in passing about the heating system. Instead of getting what they paid for, this frazzled building owner was turned into the victim of a poorly planned hydronic system.

This system ran bounced off of high limit, waiting to breathe its last breath for six years before I got there. Now, an easy fix would have been to separate the close tees the heat emitters were connected to, but a slew of other problems meant a full repipe was in order. After restoring the building owner’s faith in humanity and heating contractors, it came to light that the original botched job took several weeks to install and years of callbacks to keep it running.

The fact is, the original installers did a fantastic job of hydraulically separating this boiler! It was at this point I realized the best and worst thing about hydronics. A hydronic installation could be absolutely butchered and still work well enough to where the customer won’t know the difference. Many people can put pipe together to create a hydronic system, but it takes a lot more than that to make a good contractor great.

The reality is that hydraulic separation isn’t going anywhere any time soon, despite advancements in our industry. It will likely be used more often on future projects. Understanding the ins and outs of hydraulic separation will make you more valuable and help set you apart from the pack. Let’s continue with some of the finer points and thoughts on the topic.

While many do understand the need for dedicated boiler loops, the truth is that hydraulic separation goes so much further than most realize. It encompasses all means of preventing conflict between multiple circulators in systems.

Often overlooked is the need for hydraulic separation between multiple circulators pulling from the same header. If the header is undersized, the operation of one circulator may hinder or even completely prevent the efforts of another sharing common piping (see Figure 2). 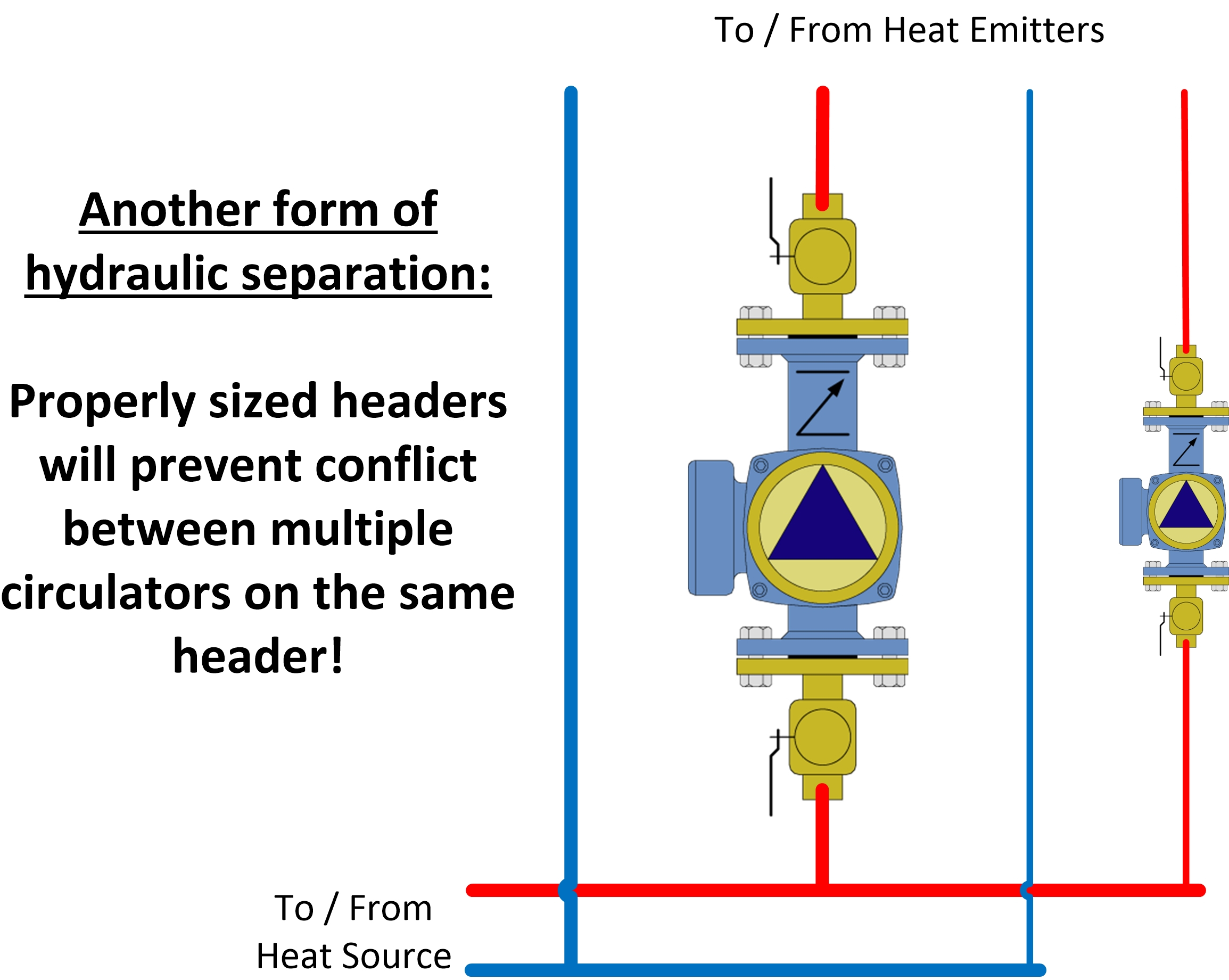 This is why it is recommended to size your headers to keep velocities low. No matter what you do, one circulator will still affect another circulator on the same header, but you want to minimize it as much as possible. Lower velocities and pressure drops that come with an increase in pipe size will help accomplish this form of hydraulic separation.

The microzoning trend will continue, which is where a buffer tank will shine by encouraging longer run cycles and equipment lifespans.

Buffer tanks also can allow for multiple heat sources. This is incredibly important when talking about future heat sources such as heat pumps. In just the last decade, heat pumps have made incredible advancements. However, secondary heat sources are still necessary, especially in areas or applications where heating requirements dwarf the need for cooling.

Air-to-air heat pumps are consistently installed with “toaster strips” to help keep up on those extra cold days; air-to-water heat pumps will have no other choice but to follow suit. Buffer tanks will easily accommodate another heat source, such as solar thermal or electric resistance heat, helping to ease the transition to more environmentally friendly heat sources.

On a side note, I was very excited recently to find a buffer tank with electric heat built right in. What an elegant way to incorporate a backup/secondary heat source! By having the electric elements in the buffer tank, you no longer need another circulator from an electric boiler to the buffer tank, eliminating a potential point of failure. Future service techs, along with your unwitting customers, will also appreciate the simplicity.

Speaking of simplicity, dedicated hydraulic separators are a great option as well. When comparing, I can see how some may be reluctant to switch from the classic use of closely spaced tees. What I’m commonly finding regarding close tees is that the rules are not being followed. They’re often too far apart or do not adhere to straight pipe distances.

This is another classic example of the best and worst things about hydronics. Not only do dedicated hydraulic separation devices take all the guesswork out of close tee rules, they also incorporate other forms of separation to remove air and debris from your systems. Who doesn’t need that?

Being great at anything is a commitment. As an industry, we need to take advantage of educational opportunities to better our understanding of theory and best practices. This is especially true of hydraulic separation. While we should be excited to embrace new technology and equipment, getting the most out of it requires so much more. Always be on the lookout for learning opportunities and keep those tees close!