As I sit here on this cold December day, I am reminded of why hydronics remain the premier heating system here in the cold and snowy Northeast. They provide a warmth that no forced air system can replicate. I can attest to that, as I currently live in a house that is heated with a forced air heat pump system. The temperature inside the house is currently at 72 degrees F, yet I still feel chilled. That is the nature of forced air. I intend on installing some panel radiators in my house, but it is one of those things that I haven’t gotten around to yet.

As I think of all the hydronic systems I have installed, one in particular comes to mind. It is perhaps one of the most interesting ones I have done to date. It is a hybrid system in a sense. It uses multiple fuel sources and has multiple emitter types. The two sources of heat are a HTP condensing LP gas boiler and an Econoburn high-efficiency wood boiler connected to a 1,000-gallon buffer tank. The house has a mix of radiant floor heating, flat-panel radiators and high-efficiency baseboard.

When I was first approached by the homeowner, the job sounded simple enough. He wanted to install a wood boiler and tie it in with his existing radiant heating system. As is often the case, nothing is as easy as it sounds, and this job was no exception to that rule.

The setting was gorgeous. It was a beautiful log home nestled back in the mountains. Only the sounds of nature met the ear.

While log homes project this aura of comfort and coziness, they are in fact very hard to heat. The logs shrink and crack over time, changing the rate of air infiltration. 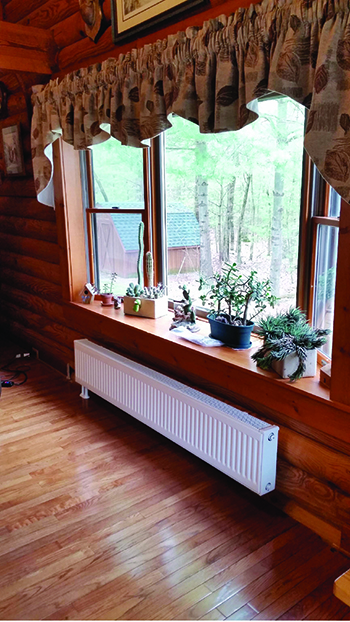 When I entered the basement and first laid eyes on the system, my heart sank a little bit. I realized we would have quite a few repairs to do before we could successfully tie in the new wood boiler.

Here is a list of the things I found wrong with the existing system:

Fortunately for me the homeowner was a retired mechanical engineer, and he understood the value of correcting all those mistakes. I love working with engineers, as they tend to understand the nuances in the mechanical world. We decided we would correct all these issues first, before continuing with the Econoburn install. He pulled down the insulation from the floor and installed heavy extruded aluminum heat transfer plates, while I corrected the rest of the mistakes. I did not envy this job!

With all that done, it was time to head to the drawing board. As is the case with every such job, an accurate heat load calculation must be performed. This one was a little tougher than most because of the solid log walls. I hired a guy to come in with a blower door and test the house for infiltration. That was the only way I could get an accurate ACH number. That also allowed the homeowner to see where additional weather sealing might be needed. With the room-by-room heat load calculation, I was able to see how much radiation each room required.

One of the goals of this project was to have every zone in the system require the same water temperature. We also wanted to get the supply water temperature as low as possible in order to maximize efficiency of the gas boiler and increase the heating capacity of the buffer tanks. We found we had to add supplemental heating to most of the areas heated by the radiant floor. We installed a mix of the Buderus, flat-panel radiators and Heating Edge high-efficiency baseboard to give the rooms the extra boost that they needed. 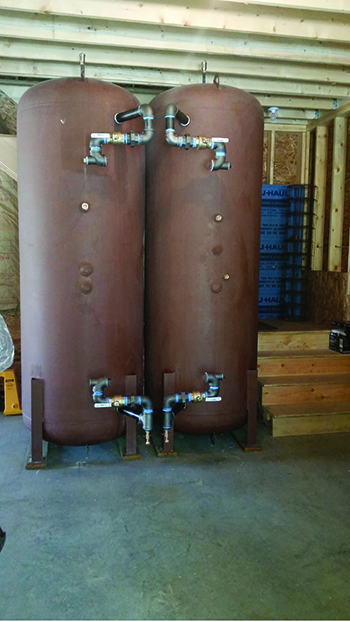 With everything squared away in the house, it was time to get on with the wood boiler installation. The wood boiler was installed in the barn, so we needed about 200 feet of underground piping. For the underground piping we chose R-flex by Watts Radiant. It is one of the best underground piping systems currently manufactured, and it’s not too bad to work with if the weather isn’t too cold. However, it is not a single man job! The Econoburn boiler is unique from most boilers due to its two-stage combustion. It burns very hot and clean.

The second stage can burn at up to 2000 F, emitting no visible smoke. The trick, however, is once you light it, it’s best if you let it burn until all the wood in the firebox is gone. This promotes the cleanest burn in the highest efficiency. The only way that goal is achieved is by connecting it to buffer tanks. This allows the BTUs from the boiler to be stored in the buffer tank, to be later used for central heating or domestic hot water production. You burn another load of wood in the boiler to recharge the tanks once the temperature drops below a usable setpoint. It’s kind of like charging the battery.

In this case we re-purposed two 500-gallon propane tanks to serve as our buffer tanks. We had legs welded on them and had pipe tappings installed. We placed them in a vertical position and installed the roughin piping.

The homeowner would later frame wall around them, sheeted with plywood on the exterior and filled full of fiberglass insulation on the interior.

The piping diagram for the boiler and buffer tanks can be seen below. 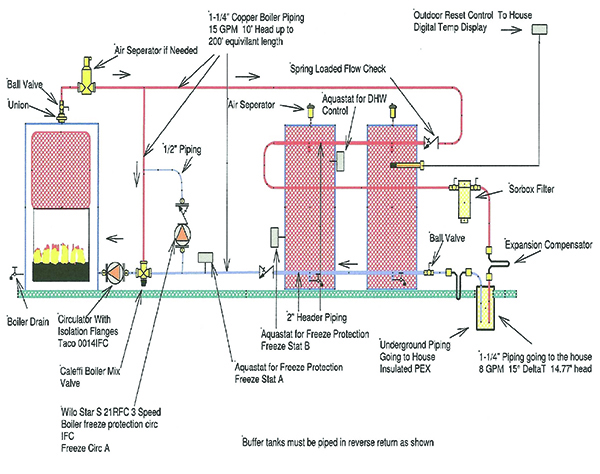 The piping diagram for the connections inside the house can be seen below. 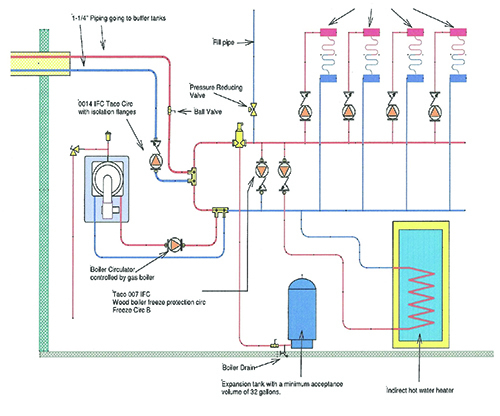 With the diagrams completed, the piping work would be easy. The biggest challenge was coming up with the control system that would integrate the two 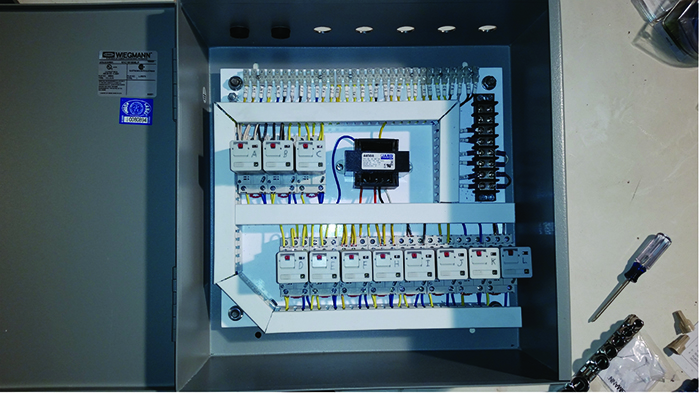 systems. I could not find any off the shelf control that had all the functions needed to make this system work. The answer was: a relay logic box tied in with a couple Tekmar controls and a few ETC temp controllers. I enthusiastically started in on the diagram for the relay logic box, that was supposed to be the brains of the whole operation. I realized very quickly that this wasn’t going to happen in one day. After a couple days of racking my brain, the diagram was finally completed. I sure hoped it would work! I had my fingers crossed. The completed relay logic box had over 50 I/Os and was tied in with a Tekmar 256 boiler control and a Tekmar 361 mixing control.

The system operation is as follows:

A thermostat will send a signal for heat to the Taco zone relay and energize the respective zone circulator. The TT end switch on the Taco zone relay will close sending a signal to the Relay Logic Box. The signal will be directed to the ODR control which will look at the outdoor temperature and compare it to the Buffer Tank temperature. If the buffer tank temperature is to low, the signal will be sent to the TT terminals on the indoor gas boiler and allow it to provide heating. The gas boiler will follow an internal ODR curve and also control its boiler circulator. In the event that the buffer tank temperature rises to meet the ODR demand, the signal to the TT terminals on the gas boiler will be disconnected and a signal will be sent to the mix control. The mix control will power the buffer circ to bring heat in from the buffer tanks. The mix control has an ODR curve built in. It will vary the speed of the buffer circ to achieve the target system water temperature as calculated by the ODR curve, in reference to outdoor ambient temperature. 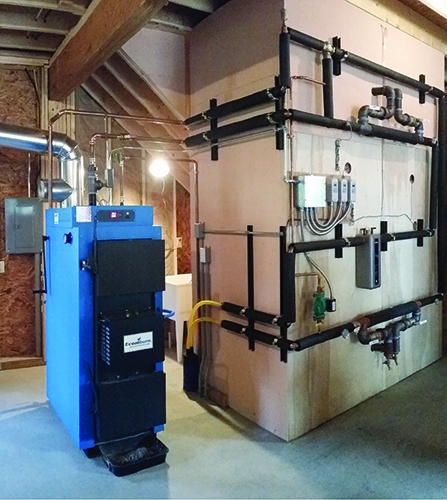 will be sent to the DHW TT terminals on the gas boiler to provide DHW heating.

Call from Freeze Stat A

When this call becomes active, it means the water temperature in the wood boiler piping has dropped below 34 F. It will send a signal to Relay G and energize both the wood boiler circulator and Freeze Circ A. This will allow water to circulate through the wood boiler and pull any residual heat from the buffer tanks. Freeze Circ A is necessary to bypass the Caleffi mix valve, which is in a bypass position at this temperature. This call will not affect indoor heating operations.

Call from Freeze Stat B

When this call becomes active, it means the buffer tank temperature has dropped below 34 F. This will send a signal to the Relay Control Box and energize Relay L and Relay D. This will turn off all calls for central heating and DHW. It will then energize the gas boiler, the buffer circulator (full speed) and Freeze Circ B. This will allow the gas boiler to be utilized to provide heated water to the buffer tanks and prevent them from freezing. Once the call goes away, the indoor system will resume normal operation.

The best part of the whole project was, everything worked!