Mechanical contracting giant that employs 1,500 people in 14 offices in six states fixes up the humble storefront that started it all 142 years ago.

If the spirit of David Ahern were to walk down Main Street in Fond du Lac, a, he would definitely recognize his old storefront. Right there on one side of doorway is the familiar signage: “D. AHERN & SON/STEAM and Hot Water Heating.” Although he might not recognize the inside any longer, we’re sure he’d be proud to see all the photos and memorabilia that five generations of his family and employees have accomplished since he started the business in 1880.

Talk about a labor of love. In the run-up to its 140th anniversary a couple of years ago, J.F. Ahern Co., a mechanical contracting powerhouse that employs more than 1,500 people with seven offices in Wisconsin and another seven offices in five other states bought and rehabbed David’s original storefront.

We first learned about the company’s plans when we wrote a series of articles in 2020 on the 10 oldest contractors that still remain in the founding families' hands. (There were actually 11 profiles since two contractors started in the same year.)

But the oldest was J.F. Ahern, which began out of this storefront located at what is now 17 S. Main St.

COVID kept us away from visiting the space. But we drove up last February when Tony Ahern, president and chief operating officer; and Krista Ebbens, general counsel/corporate secretary and executive vice president of human resources, let us take a look inside. 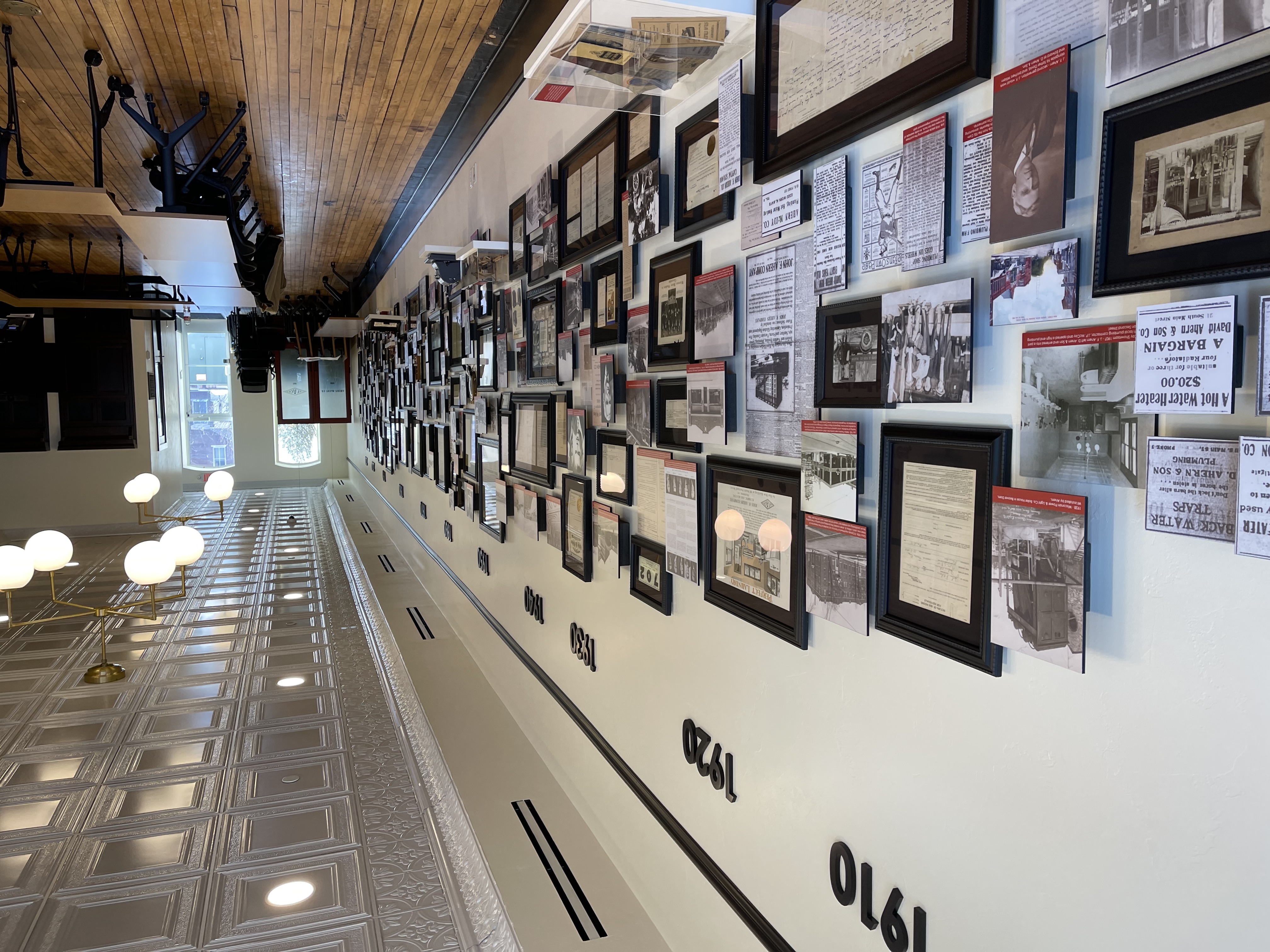 “When we bought it, the place was uninhabitable,” Tony says of the space that was last used long before the Ahern purchase as a candy store. “There was nothing inside but the walls and ceiling. No bathroom. No plumbing or piping. About the only thing that’s original is the wooden floor.”

Ebbens told us Ahern staff uses the storefront a couple of times a week for offsite meetings. While the company’s headquarters, located less than a 10-minute drive, has plenty of conferences rooms, it’s hard to beat this spot. The space has also been used for meetings by a local economic development agency the company supports. And while it hasn’t been opened that long, Ebbens says a few employees have also hosted wedding rehearsal dinners at the site.

It also seems a natural to impress company vendors or GCs. Along one wall stretches images and memorabilia throughout the company’s 14 decades. And along the other wall, graphics represent the company’s work across all its business sectors including fire protection; industrial service; pipe fabrication; plumbing and mechanical; and building controls.

The look of the interior also copies the lighting fixtures that were used in the company’s second location, also once located in downtown Fond du Lac. In its rehab, the company added a kitchen and bathroom outfitted in styles of the past.

The plan all along, Ebbens says was to create a replica of the old shop and illustrate the company’s "heritage and the evolution of the brand."

“One of our desires was to really go and find everything that we could,” Ebbens adds. “We went to historical societies. We combed through newspaper records and found advertisements that we had never seen before. We even asked employees and retirees what they may have saved over the years.”

While the very best is on display, Ebbens says every item gathered throughout the search is appropriately cataloged and stored for prosperity.

It’s hard for us to summarize all the material on display and we’ll let some pictures tell a part of the story (and we’ll put more online, too).

For example, at the front of the storefront, there’s a tin-lined wooden “plunge bath” that was found in a barn and donated to the company. On the back remains the painted words: D. Ahern & Son, Fond du Lac, Wis.

Along the timeline wall are pay records; at least two dioramas crafted by employees to show the common plumbing and mechanical work done by the contractor; a grandfather clock built part by part by an employee and given to the company in 1978; and a magazine article profiling the company’s then-new diversification into fire protection as well as other industry ventures and milestones.

One highlight of our tour was a painting called “Point Ahern,” created in the 1930s by Owen J. Gromme, a renowned Wisconsin wildlife artist, family friend and fellow duck hunter.

At some point the painting disappeared until a news story in 1977 located it hidden away at a small town antique store. The Ahern family bought the painting and reproduced it in limited edition prints to share with friends. 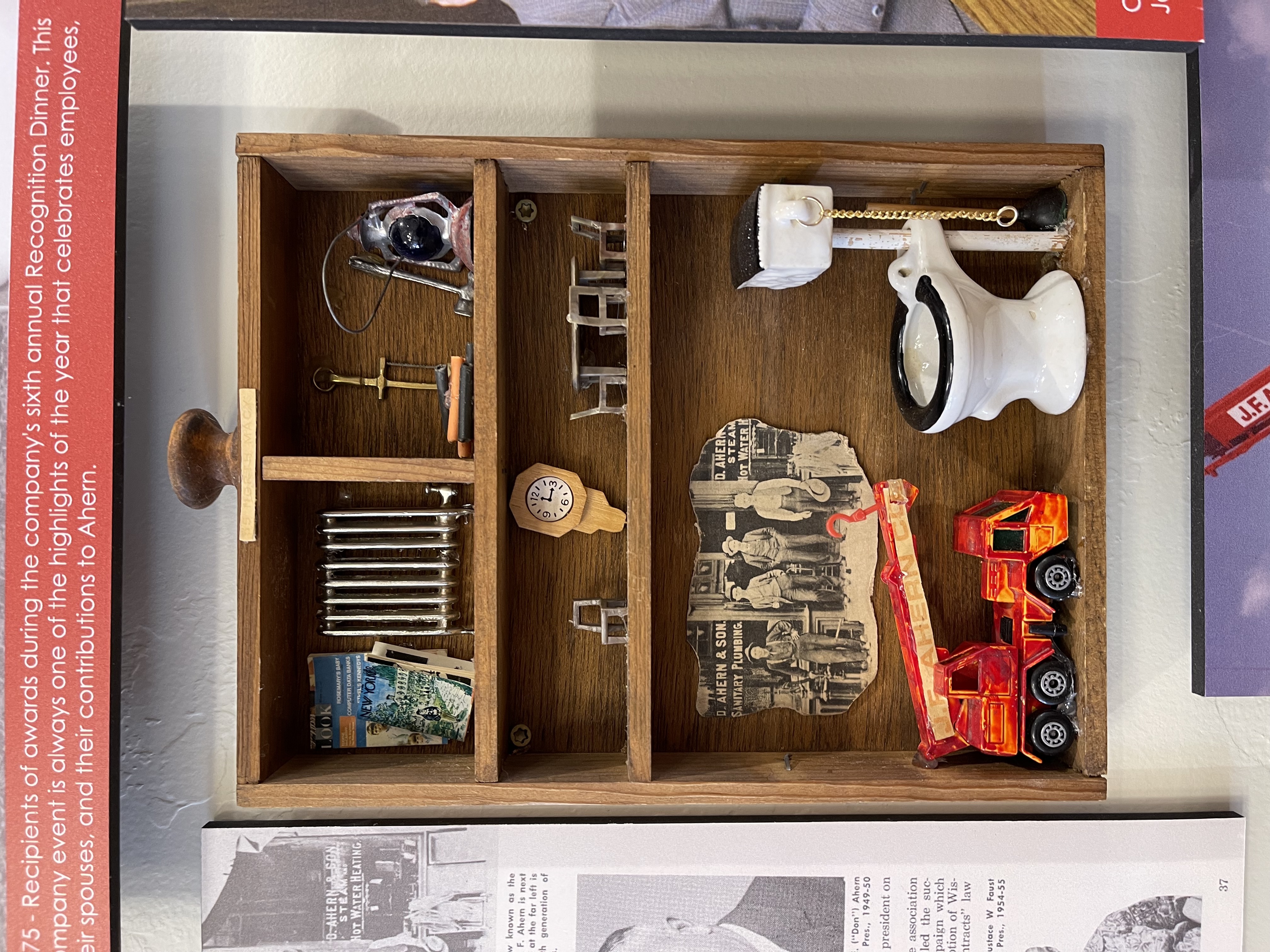 For Tony, the timeline shows the changes that can be plainly seen in the industry’s use of technology and safety.

“Some of these pictures show jobsite practices that would never fly today,” Tony adds. “And then you look at pictures of old boilers and know that today you could shrink that boiler by two-thirds and produce the same amount of heat.”

Sure enough, a nearby article extols the virtues of lead piping!

By the 1950s, pictures at the Ahern HQ show women entering the workforce, too.

“It’s also begins a time when many people who have retired from Ahern still have living memories of the company,” Ebbens says, adding that the company does often hold work anniversary and retirement parties, all of which makes the storefront a great place from Ahern veterans to be hosted now that many rules limited gathering due to COVID have been relaxed.

In the back of the space is a plague dedicating the project to John E. Ahern Jr., Tony’s father who passed away in 2019. John Jr., chairman emeritus when he died at 83, served the company for 60 years. Among his many industry accomplishments was the year he spent as the president of the Mechanical Contractors Association of America in 1995.

“That’s probably one of my deepest disappointments that he didn’t get to see this,” Tony adds who along with his brother, Tripp Ahern, chairman and CEO, represent the fifth generation of family leadership. “He would have provided so much more commentary on the people and the history behind the growth of the company.”

It’s not easy to summarize 142 years of J.F. Ahern Co. history. Certainly, you can revisit our 2020 feature: bit.ly/3JAbNPi. The company also published three books to celebrate its 125th, 135th and 140th anniversaries, which readers can click on at the bottom of this page: bit.ly/3KDFdNY.

But let’s just at least discuss the life of David Ahern and a son whose name lives on. 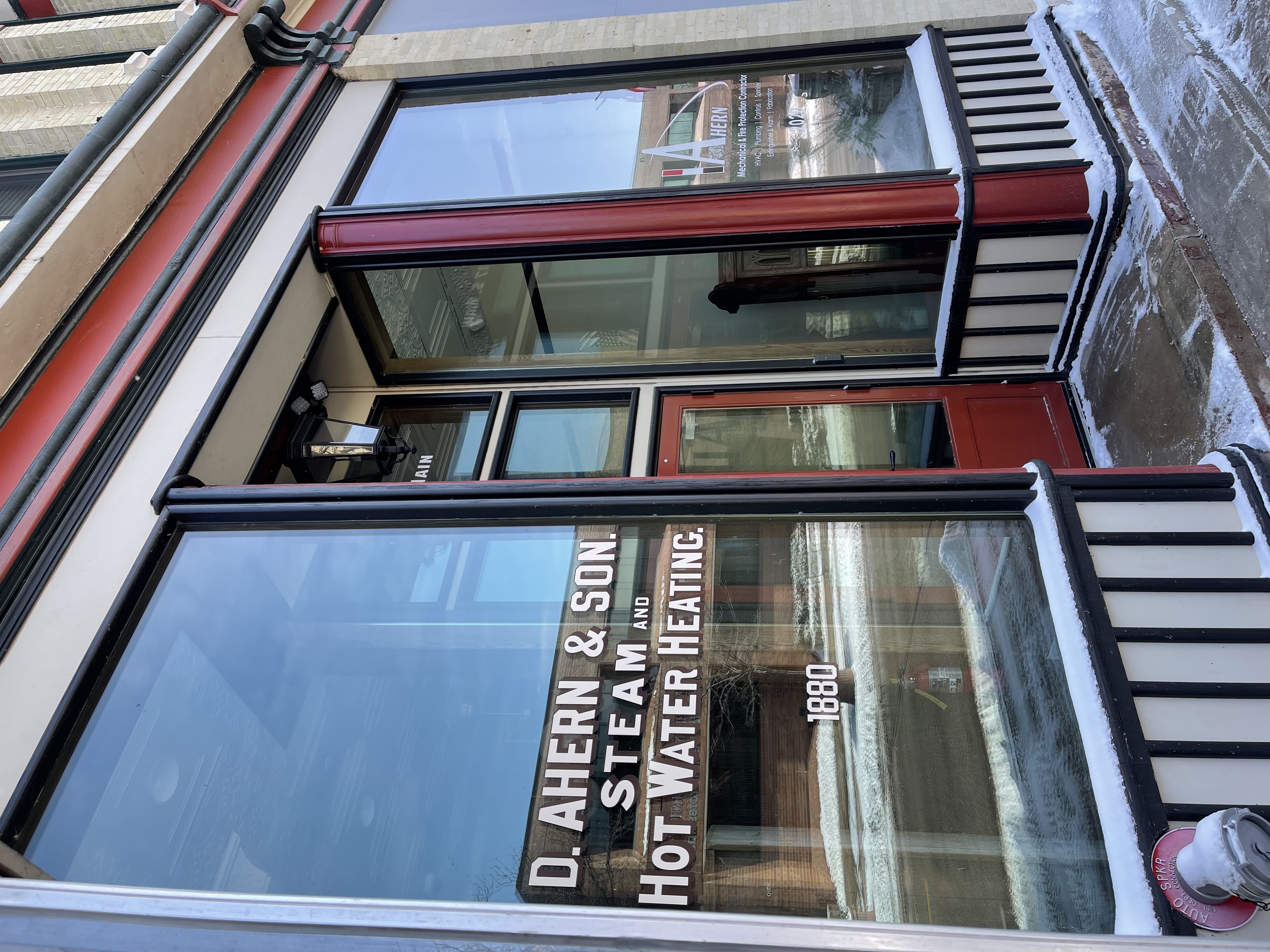 David was born in County Cork, Ireland in 1832. As a teenager, David and his family immigrated to the United States in 1849, arriving in Philadelphia. The family traveled around the Pennsylvania area before arriving in Two Rivers, Wisconsin, in the late-1850s. David then met Mary Egan, also an Irish immigrant. The two were married in November 1858 and settled in nearby Fond du Lac in 1860.

David, a skilled pipefitter, ended up in the right place at the right time since the town had organized a gas works just a year before he got there.

Fond du Lac was also a boomtown back then with a population of 12,000 people. And it was also one of only 598 cities in the whole country with piped water systems. (Keep in mind, too, that another plumbing business that remains in family hands was getting its start in 1883 when John Kohler created the first cast-iron bathtub in 1883 made from an horse trough about 40 miles from Fond du Lac.)

After working for others for a time, David opened D. Ahern & Son in 1880. Pictures of the original shop show that David may have operated the PHC industry’s first plumbing showroom too.

While modern flush toilets weren’t around yet, latter photos of the storefront displayed “high tank” water closets that used around 10 gallons of water per flush. Inside the Main Street storefront were also a selection of claw foot tubs and radiators. David also advertised for sale sewer pipe, lead and iron pipe, brass goods and rubber hoses.

Out front on the dirt Main Street, David’s horse-drawn wagon was ready to make deliveries of materials and tradesmen to serve the town’s growing population and desire for clean piped water and heating. According to company records of one transaction, D. Ahern & Son charged 32 cents for 4 pounds of lead pipe; 13 cents for a half pound of solder; and 40 cents per hour for labor.

Despite the “& Son” part, John had more than one son involved in the business. But by the 1900s, John Francis Ahern, aka, J.F. Ahern, took over most of the company operations.

In 1906, J.F. partnered with another contractor, J. P. McCoy, and opened the Ahern-McCoy Plumbing Co. down the street from the original business, offering steam and hot water heating, plumbing, drainage lines and gas fitting.

Also, around this time, J.F.’s sons, Thomas L. and John E. (“Don”) joined the company. In 1907, J.F. became a founding member of the Wisconsin Master Plumbers Association and was elected the town’s sewer superintendent.

In 1978, the built a 30,000 square foot facility on 12 acres of vacant land on Morris Street, (since expanded), which still remains the company’s headquarters. It’s less than three miles from the original D. Ahern & Son storefront.