‘How to Succeed in Business by Really Trying Hard,’ might be the motto of this founder of two companies built from scratch.

Some two decades ago, Hans Kuster was running Sparco, a company he had founded in 1983 after a more than two-decade career at Taco. “By the time I started Sparco, I had seen what the Europeans were doing with products for hydronics,” he adds, “and I felt that I could make much better products.”

He started Sparco from scratch using his house as collateral for a line of credit with the blessing of his wife, Ellen.

“She knew I could do it,” Kuster says of his wife of now 53 years. “I have to give her credit for believing in me and letting me borrow against our home without hesitation.”

And he did produce great products. In fact, one of the company’s first big breakthroughs was with its Aquamix mixing valve for domestic water and water heating applications.

“We sold a million of those,” Kuster says.

By 2000, however, Kuster had run Sparco for 17 years and was at a crossroads.

“We started out with a simple idea of making better products,” Kuster explains. “Our secret to success was listening to our customers and helping them with product ideas that enhance their market position. We brand-named our products with special features and designs for the OEM customers who have a strong market presence of their own.”

With this strategy, Sparco carved out a niche for innovative products for the plumbing and radiant heating industries. In addition to the Aquamix, Sparco also made other products, and branded them, for example, with Uponor (known as Wirsbo back then).

“We redesigned their manifolds and expander tools, and also branded three zone valves and air eliminators,” Kuster adds. “We made everything but the PEX.”

Through the years, Kuster also worked out OEM deals with other notable manufacturers such as Kohler, Grundfos’ Canada operations and Zurn. In all, Sparco was awarded 18 patents for its unique products.

“It took me 17 years to build our reputation,” Kuster adds, “and we made some wonderful products for some big companies. That was a good thing.”

But he also wanted to keep growing Sparco. To accomplish that, Kuster needed access to larger customers and that required a larger sales network than he had at the time.

So that year at the 2000 AHR Expo, Kuster walked over to the Honeywell booth and invited staffers to visit his booth for a look. His initial intention was to interest the HVAC and controls giant in another of his successful OEM deals.

“I told them that I had better products than they had, but that they had a stronger sales force,” Hans recalls. “First, two guys stopped by our booth and then, an hour later, 12 guys came over. And by the next week, I had the big guy from Honeywell track me down and ask, what my succession plan was. And told him, I didn’t have one yet, but for the right price, anything was for sale.” 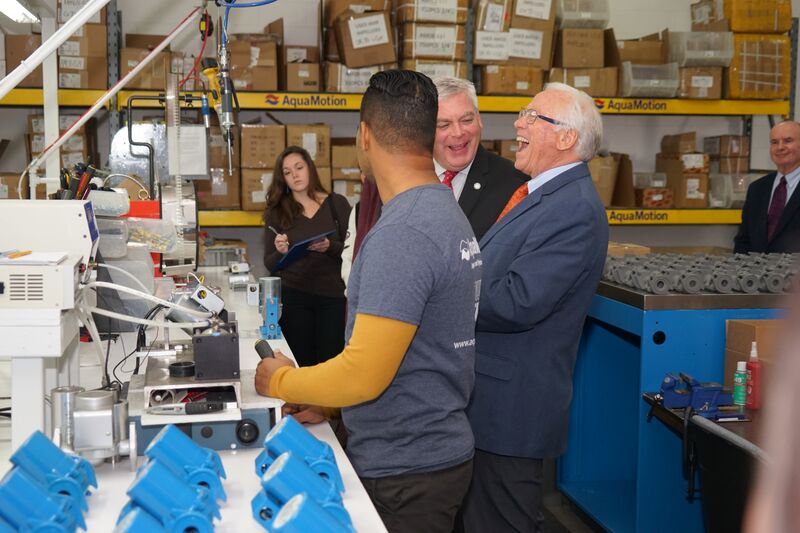 And like that, Kuster sold Sparco at the age of 63. He had a one-year contract to work at Honeywell to train his successor followed by a non-compete clause.

At that age, you might think Kuster was heading for retirement. But if you think that, you don’t know Hans. Yes, he did do some traveling. That’s a natural pursuit for a Swiss national who started out his career teaching ground operations at Swiss Air Lines and can speak five languages. He even learned how to paint.

“I became very good at painting,” Kuster says. “But it wasn’t as rewarding as making and selling plumbing and heating products.”

“My efforts were always in doing more for the customer and solving their problems and establishing a personal relationship of trust,” Kuster says. “The qualities required for success are product knowledge, discipline, imagination, focus, curiosity and a drive to succeed. Plus, keeping your promises.”

And, he adds, “most importantly, you need a good team.”

So that year, Kuster started AquaMotion and called up his old friend and colleague Benno Lebkuchner. They met during their careers at Taco, and eventually Benno joined Hans at Sparco in 1991.

By the time of AquaMotion’s beginning, the two had a combined half century of pump industry know-how. They started their new adventure developing the best circulator based on their experiences beginning with wet rotor pumps in North America, and building on Benno’s previous inventions, such as the hollow shaft and cartridge designs.

“I set out the following objectives with AquaMotion: Design a pump with the lowest manufacturing cost by design; lowest power consumption for energy efficiency; highest overall efficiency and quality; interchangeability with competitors; simplicity in use and service; patentable features; competitive pricing; and the best customer service.” 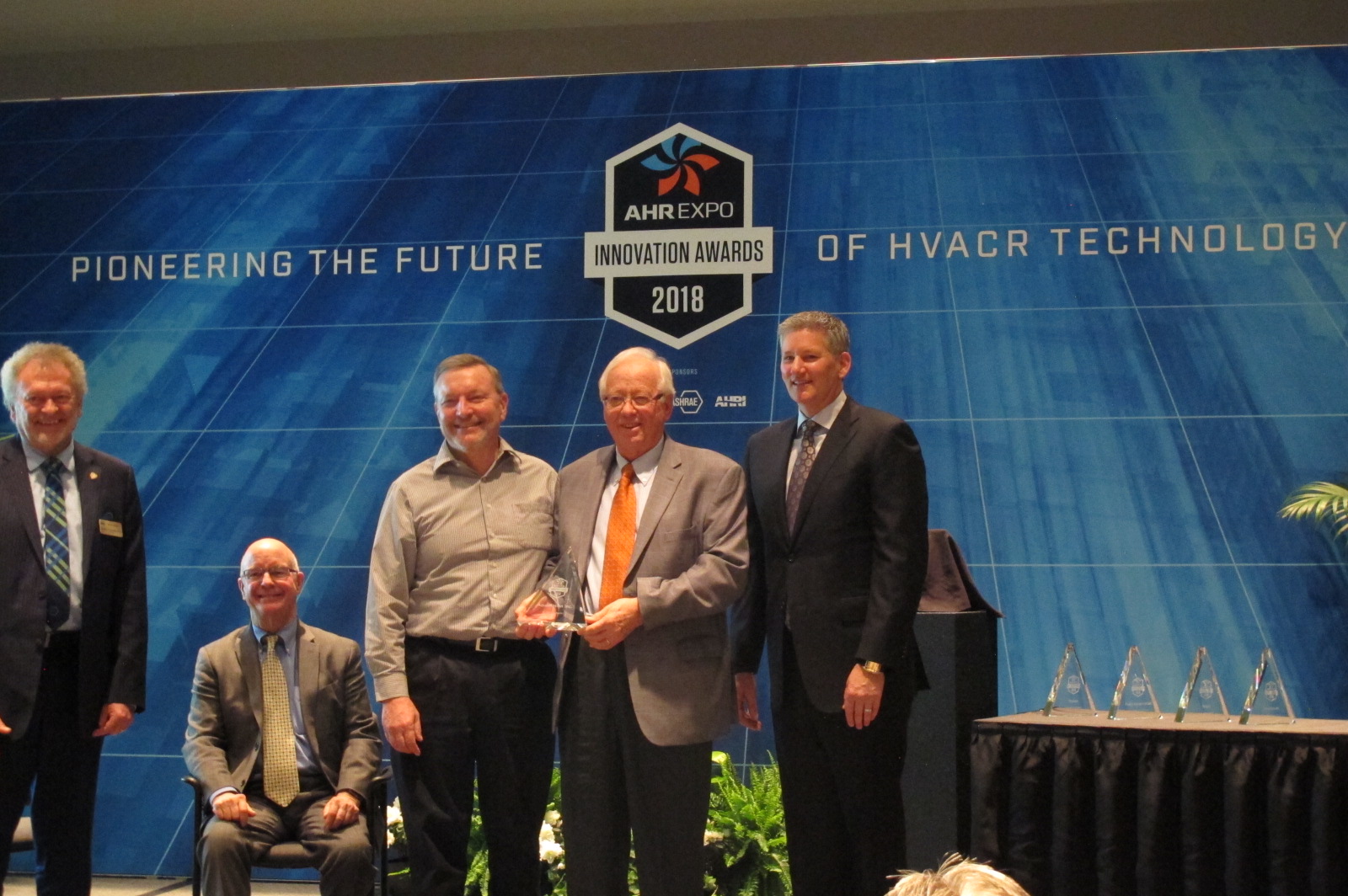 One of AquaMotion’s first major products was a patented Green ECO-Cartridge Design, with the only replaceable cartridges that could be removed, flushed and reinstalled or replaced.

With competitive manufacturers, plumbers were forced to replace the entire cartridge and motor assembly or pump, increasing the footprint on the environment and doubling the cost to the consumer.

With an AquaMotion pump, installers can simply pull out the rotor assembly, flush the cartridge and reinstall it. This design was a tremendous advantage in areas with hard water.

“When there is a calcium buildup,” Kuster explains, “a plumber can flush the cartridge or opt to purchase a $50 replacement cartridge rather than replace the stainless pump at a $300 cost. A sustainable product!”

The helpful design also prevents black iron oxide and contaminants from entering into the cartridge.

“Our pump line was developed with the lowest power consumption of any PSC motor and the lowest power consumption of any ECM pump on the market,” Kuster adds. “In summary, we have a great team with lots of industry experience in pump and valve design focused on creating useful products to improve state-of-the art in water distribution, hot water recirculation and heating systems.”

One innovation AquaMotion may be best known for is in water recirculation products that provide instant hot water, reducing water waste and saving homeowners plenty on water and electricity, and utility fees.

“We now supply our recirculation technology to some of the largest industry OEMs, solving their issues with tank and tankless recirculation applications and helping them to quickly add hot water recirculation to their portfolios with proven products under their logo,” Kuster says. “We have devoted our R&D time to finding better solutions for solving these types of application challenges and improving upon the current technology.”

It’s easy to see why AquaMotion considers itself the leader in hot water recirculation. The company’s dedication to excellence has paid off in not one, but two awards for innovation handed out at the AHR Expo. The first came in 2015 with the latest in 2018.

In 2018, AquaMotion won top honors for the most innovative plumbing product for its Aqua-Flash, an under-sink hot water recirculation system. The Aqua-Flash bypass valve provides an improved bypass design, which provides instant hot water comfort at point of use. The bimetal coil is calibrated to deliver 93-degree water temperature. The valve doesn’t need fine mesh screens to prevent calcium buildup.

The recirculation system saves a home with five taps about 12,000- 15,000 gallons of water a year from being dumped down the drain, according AquaMotion.

And this past January, AquaMotion introduced a kit (AMH1K-6ODRZT1) that enables tankless water heaters to deliver hot water faster and without short cycling, which could shorten the life of the tankless water heater. A US patent was received for this water delivery system.

The circulator is installed in the hot outlet of the tankless heater. The pump has a special bypass connection with a built-in check and a flow control to deliver 1 GPM into the cold inlet of the heater through a special tee with a check to prevent hot water from entering the cold supply to the fixtures. In order not to waste water down the drain while waiting for hot water, an ODR stainless Superflow bypass valve is installed under sink at the faucet farthest from the tankless heater. This valve bypasses lukewarm water back into the cold supply line and back to the heater. When cold, the bypass valve is fully open to pass sufficient flow to start the heater. The valve maintains 95 degrees at the faucet.

“Key tank and tankless manufacturers have recognized that we have solved their problems of hot water recirculation,” Kuster adds. “And that is giving our company tremendous potential. We just introduced the first outdoor pump for use with tankless heaters installed outside. In the Southern tier of the US, tankless heaters are installed outside to save on expensive air intake and exhaust system. Another first product with patent pending.”

Kuster also credits AquaMotion’s success to Michael McNamara who joined the company in 2013 as director of engineering. McNamara brings along experience gained after heading up engineering operations at Grundfos, Pentair and Taco. At AquaMotion, McNamara, better known as “Mac,” has designed many new products, such as ECM, electronically controlled motor circulators, and hot water recirculation valves and systems, which keep AquaMotion in front as technology leader in pumps and hot water recirculation systems.

“I believe in customer service and my crew is trained to do a fantastic job,” Kuster adds.

Any order, for example, that comes in by 4 p.m. gets shipped out the same day – even if that means AquaMotion runs a special truck to the local UPS.

Kuster is also a believer in print advertisements to promote his products, as well as trade exhibition. Our conversation came on the cusp of receiving hotel information for next year’s AHR Expo, an event he can’t wait to get back to.

“I go to work every day,” Kuster says. “And I still get a kick out of doing it and building an enduring institution.”