Free Subscription
Home » Am I Writing Anything That’s True?
The Future is Now

Am I Writing Anything That’s True?

The world we live in now seems more filled with information than ever before — and, of course, more misinformation. Let’s say that when children return to school following the COVID-19 pandemic, a shiny new air filtration and ventilation system has been installed to protect everyone from the spread of viruses or other airborne hazards. Maybe it includes MERV filters and UV lights inside.

Some will say it’s necessary. Others will say it’s overkill. It’s a difference of opinion, but is there misinformation involved? If there is, it’s not the kind I worry about. It’s healthy debate among people who all want safer children without heavy profiteering.

The misinformation concerning me is the kind insidiously published and known to be false, not just by experts but by the people publishing the information. Usually for profit reasons, they seek to influence, mislead, confuse and delay our transition to better, healthier, low-carbon buildings, vehicles and power generation.

These groups are more desperate than ever. Although I usually focus on clean energy success stories, I feel compelled to counter the flood of falsehoods flowing lately into the popular press and social media.

A telltale red flag is that frequently an attempt is made at making something seem complicated when it’s not. The most telling red flag, however, is the source. We need to ask who said it and who do they work for? The answer generally explains their position.

The irony of the messaging from these big companies is that it sometimes implies clean energy is a socialist conspiracy. Yet, the oil and nuclear industries have never been able to survive without extensive subsidies, tax breaks and bailouts from the public purse.

Their collaborators continuously introduce clever-sounding articles, posts and social media comments suggesting that every kind of clean energy won’t work as well as expected or won’t work at all. Occasionally it’s true; the hype was too big, some limitations were glossed over. But mostly, it’s not true. Many of the weak solutions have already washed out. The new systems taking over are well-known, proven and commercially successful

The most damaging mythologies start with a grain of truth and then get blown out of proportion by those who prefer things the way they are now.

Do heat pumps work in cold places? Yes and no. The grain of truth is that air-source heat pumps, even the newest, best-engineered ones, can falter in below-freezing weather in buildings with envelopes full of holes and bad windows. This rarely occurs because heating techs and engineers are smarter than suggested by mythmakers. Instead, we fix the envelope first or use ground-source heat pumps.

Thousands of heat pumps are now installed and operating for domestic hot water and space heating in the Northeastern United States and frigid Canada. Statista.com tracks U.S. shipments of heat pumps, which doubled in eight years, increasing from 1.7 million in 2012 to 3.42 million in 2020.

Some people also say new systems don’t work in very hot places. It is the reason ASHRAE decided to retrofit its new headquarters in Georgia with air-source heat pumps and mostly radiant ceiling panels. Engineers said they wanted to prove the naysayers wrong. Their second choice would have been water-source heat pumps because the building is a waterfront property, but by improving the building envelope, they decreased the space conditioning load instead.

Do professional chefs hate induction cooktops? Of course not, but numerous stories appearing in the media saying they do. We all had some trouble adjusting to our cell phones during the first week, but landline installations are not exactly increasing at the moment because it’s outmoded technology. Gas stoves also are outmoded, unhealthy, dangerous and bad for the planet.

Will heat pumps cripple the power grid? Gas companies have commissioned research firms to write questionable reports arguing that when most of our buildings are heated and cooled by heat pumps, it will overburden the electricity grid, causing its collapse. However, when Sweden switched 94 percent of its buildings from oil and resistance heating to heat pumps, electricity use went down by 30 percent due to efficiency improvements.

As we know, heat pumps are about 300 percent to 500 percent more efficient than gas-burning appliances. Yet, the gas industry passed the bogus report around between numerous states and cities, both before and after its flaws were proven, and touted it repeatedly as reality.

The Swedish example also debunked the myth that too many ground-source heat pumps all grouped together would freeze or overheat the ground. Tens of thousands of GSHPs are in Stockholm, street after street. Nothing bad has happened in a couple of decades since they were installed, again because engineers were consulted. This also is true in residential geothermal communities I’ve visited in Kentucky, Georgia, Canada and Texas.

I’m sure these numbers vary in different places. The important point is that product improvements, market penetration and volume production make the business case a little better each year, and sales of HPWHs are zooming up.

Are rainwater collection systems worth considering? I’m not sure, but don’t make any assumptions. If someone is willing to provide you with a quote or proposal for free, hear them out and read their pitch. Drinking water, sewage rates and requirements have increased because much of our more than 100-year-old North American infrastructure is reaching the end of its useful life.

If we really do replace all the lead pipes in our water distribution systems, I would not expect water bills to start decreasing any time soon.

Is passive house affordable? When I began writing about passive house 10 years ago, projects cost about 30 percent more than poor-envelope homes. However, when the Pennsylvania Housing Finance Agency started offering developers points for passive house, the first projects a few years ago cost 3 percent more. Now they cost 1 percent less in Pennsylvania and most places because builders are further along the learning curve.

The rule of thumb: Don’t make any assumptions. You or your client might become one of the thousands who are already saving big on peak shaving, using storage and software.

If you haven’t started already, now might be the time to learn more about electricity storage. The day could arrive suddenly when you realize that you have a significant disadvantage. It’s not too soon; it’s a perfect opportunity for mechanical professionals who are generally already trusted by building owners.

Electrification is not going away and will eventually dominate construction, starting with cities. Things are moving fast as governments regulate, equipment makers plot future strategies, and your competitors adopt clean systems. Cash in on the bonanza and save the planet at the same time.

Will carbon prices kill the economy? The World Bank says 40 countries and 20-plus cities, states and provinces use carbon pricing mechanisms. For example, British Columbia introduced a carbon price in 2008. In the following 10 years, its gross domestic product growth was the fastest of any Canadian province, totaling 32 percent by 2019. In addition, unemployment went down during the same period from 7.7 percent to 4.7 percent, also continuously beating the Canadian average.

Do we need a lot of inventions to solve climate change? No, we do not. This is a persistent myth that Big Oil likes to spread to make governments timid in their decision-making. Bill Gates recently published a book in which he argued that many needed climate solutions haven’t yet been invented. The real experts disagree.

We can solve climate change with existing proven tech. Professor Mark Jacobson, who holds a master’s degree in environmental engineering and a Ph.D. in atmospheric science and is supported by a team of P. Eng scientists at Stanford, wrote several books showing we can eliminate most of our emissions with well-proven technology.

His group developed detailed pathways to 100 percent renewables for 143 countries and all 50 states. Many jurisdictions have been operating on more than 80 percent renewable power and batteries, even though naysayers say it’s impossible.

For example, data from the U.S. Department of Energy, the International Energy Agency and World Bank were used to create the chart shown in Figure 2. 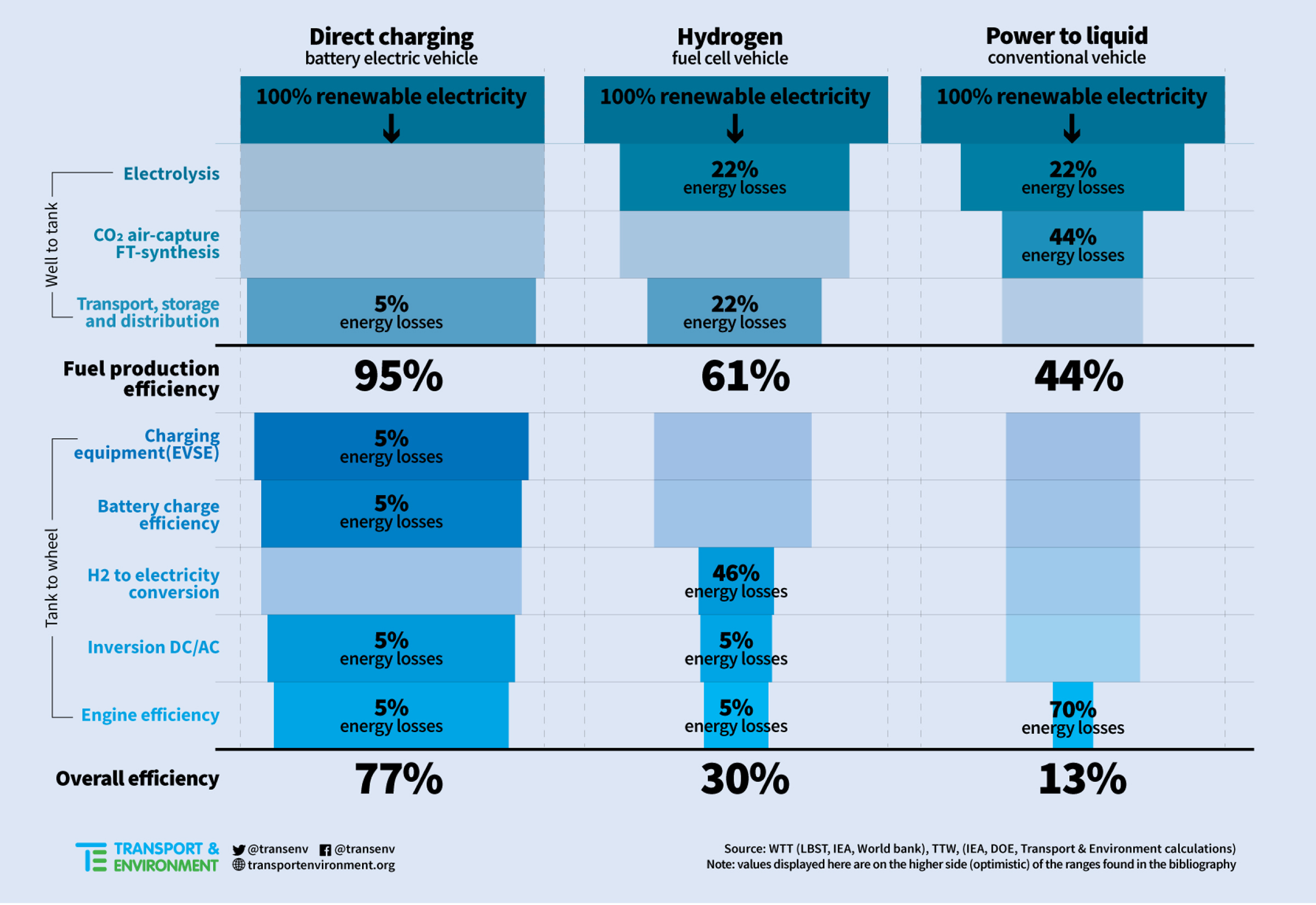 As indicated, gas engine and supply chain inefficiencies lose 87 percent of energy, compared with 70 percent for hydrogen cars and 33 percent for electric vehicles.

Are electric cars worse for the environment than gas cars? Pretty much never.

Do we need carbon capture and sequestration (CCS) to solve climate change? Every major carbon capture project has gone bust or soon will end. All have cost billions, and Jacobson’s group explains that they create more carbon, not less, because the systems are usually powered by gas.

Even if fossil-fuel companies keep their promise to eventually power CCS using renewables, Stanford’s analysis reveals that CCS will not be worth doing economically or environmentally, compared with alternative, better investments in clean energy.

Do we need gas plants or nuclear to solve climate change? No, we do not. Everything a gas plant can do, batteries and software can do better, and recently at competitive costs. The wildest fictions come from the nuclear industry, which has done serious harm to our energy transition by siphoning billions in investment to projects that keep increasing in cost and downside.

Is nuclear power cheap? It’s the furthest thing from cheap. Private investors are now walking away from nuclear all over the world, even in countries that were nuclear leaders. Jacobson’s numbers show nuclear costs 500 percent to 700 percent more than renewable power through billions in budget overruns, schedule delays, corrupt bailouts, decommissioning funds and nuclear waste. The few new reactors still being built in Georgia and overseas are unconscionable albatrosses on ratepayers.

You might be surprised to hear nuclear power is expensive because for decades the industry relentlessly published the claim that nuclear is cheap. Nuclear is not cheap, not clean, not safe. It’s not needed for our clean energy transition. It’s not capable of helping.

It takes 10 to 20 years to design and build a nuclear plant, compared to 10 to 20 months for renewables. Nuclear plants use billions of gallons of water for cooling. In very hot temperatures, such as those that will be common by 2030, they can’t operate at all.

Will SMRs save us? No. The latest nuclear misinformation campaign concerns small nuclear reactors (SMRs). But these are decades from being proven and they will not make nuclear any more affordable per kilowatt, cleaner, more capable or safer.

SMRs are unlikely ever to be completed, with or without investment from Bill Gates. The NuScale SMR in Oregon is already in financial trouble. Investors are exiting when they realize SMRs may not work, will solve nothing and keep costing more.

It’s time to go back to school on clean energy and get our facts straight. Remember, if they say it’s complicated or doesn’t work, check to see who is paying them.

Who pays Nagy and how do we know he’s telling the truth? If I’m creating misinformation, it’s not intentional and not for financial gain. In my four years as a columnist at Plumbing Engineer, corrections to my grammar and punctuation are about the only edits I’ve noticed.

Disclosures: I have embarrassingly small stock positions in Tesla and some other green companies, but I don’t hesitate to criticize these firms in public, and I don’t promote them unless they deserve it.