The power industry continues the decarbonization of the electricity fuel mix, while petroleum refiners are buoyed by increased gas consumption.

With the increase in COVID-19 vaccinations and the lifting of mask mandates, many industries are striving to make up lost ground following the market challenges posed by the global pandemic.  The first part of 2021 was shaped by adjustments to project timelines as plant owners and investors continued to grapple with how their markets would play out. However, an overwhelming view is that the gross domestic product and the broader economic outlook have returned to growth mode.

The overarching trend is the continued decarbonization of the electricity fuel mix against a backdrop of declining electricity demand growth and growing levels of energy end-use efficiencies coming into the market.

In 2020, the power industry’s project kickoff realization rate dropped to 31 percent due to project delays and deferments as a result of COVID-19 precautions, according to Industrial Info’s Global Market Intelligence project database. But Industrial Info’s researchers estimate the industry could see 41 percent and 48 percent realization rates in 2021 and 2022, respectively, under current market conditions.

For the United States and Canada, electricity demand growth remained flat, with the exception of some regionalized pockets. Near-term electricity demand fell in 2020 by a record 4.3 percent due to COVID-19-driven business lockdowns and closures, but demand is rising this year. 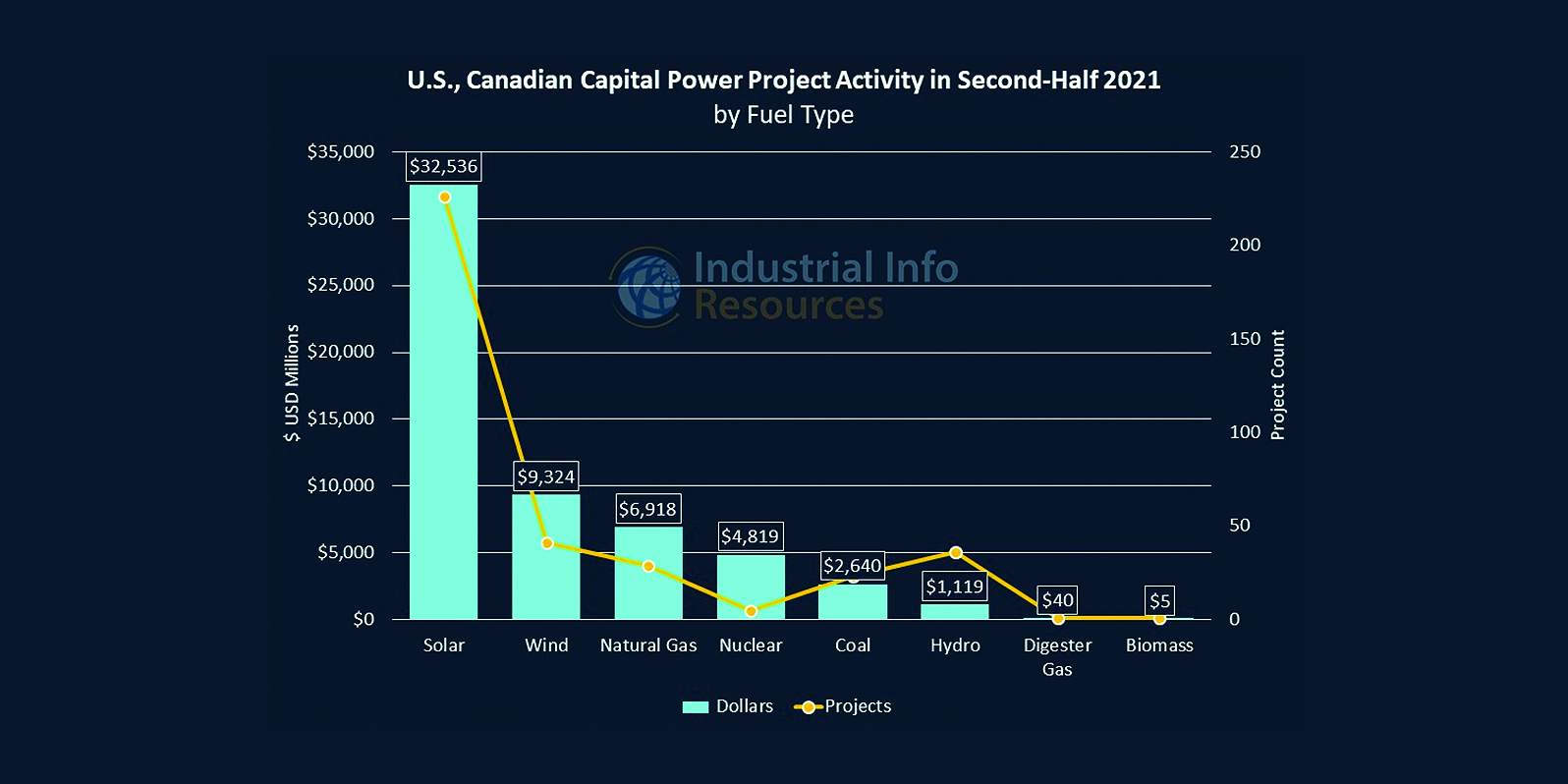 Pressure on older, less-efficient coal fleets will continue to push many utilities to accelerate some of their retirements. Between 2011 and 2020, the markets saw 192 gigawatts of capacity retire, with most of that being coal-fired capacity. Much of the remaining U.S. coal fleet is more efficient or recently invested in environmental upgrades, which could make those plants less at risk from new environmental policies.

Industrial Info expects to see retirements slow down, although 2021 will see a record number of nuclear retirements. This year, 9.1 GW of electricity-generating capacity is scheduled to retire, with coal accounting for 30 percent and nuclear accounting for 56 percent.

President Joe Biden highlighted nuclear as a critical zero-carbon technology, and he believes it has a role to play in addressing climate change. The first step appears to be extending the lifespan of existing nuclear plants and stem the wave of capacity closures. Nuclear power’s share of U.S. electricity generation could fall from 19 percent in 2020 to just 11 percent by 2050. There are 57 currently operational plants and 95 licensed power reactors, with 99 GW in 29 states.

Over the past several years, the U.S. Nuclear Regulatory Commission (NRC) started accepting applications from nuclear plants to remain open for 80 years. The NRC also is considering whether it should begin developing a framework for licensing plants to run for up to 100 years.

Last year saw a major decline in gas-fired projects moving forward. While Industrial Info expects a long and gradual slowdown in gas-fired investments, this year will see an uptick in planned spending.

Natural gas accounted for nearly 40 percent of all power generation in 2020. Until battery storage technologies become truly scalable and more cost-effective, natural gas will continue to provide a big upside and will grab the majority of coal and nuclear’s declining market shares.

The Biden administration’s clean energy bill would be a major boost for renewables. Industrial Info’s researchers project about $21 billion of wind power capital spending will kick off in 2021, along with about $29 billion for solar power.

Growth in these sectors could accelerate on the back of federal policy support and national zero-carbon goals, with tax credit extensions and expansions for both solar and wind, including a new tax credit provision for offshore wind projects. But what will really push investment along is reintroducing the Growing Renewable Energy and Efficiency Now legislation, which includes a five-year extension of the investment tax credit for solar-generation facilities. 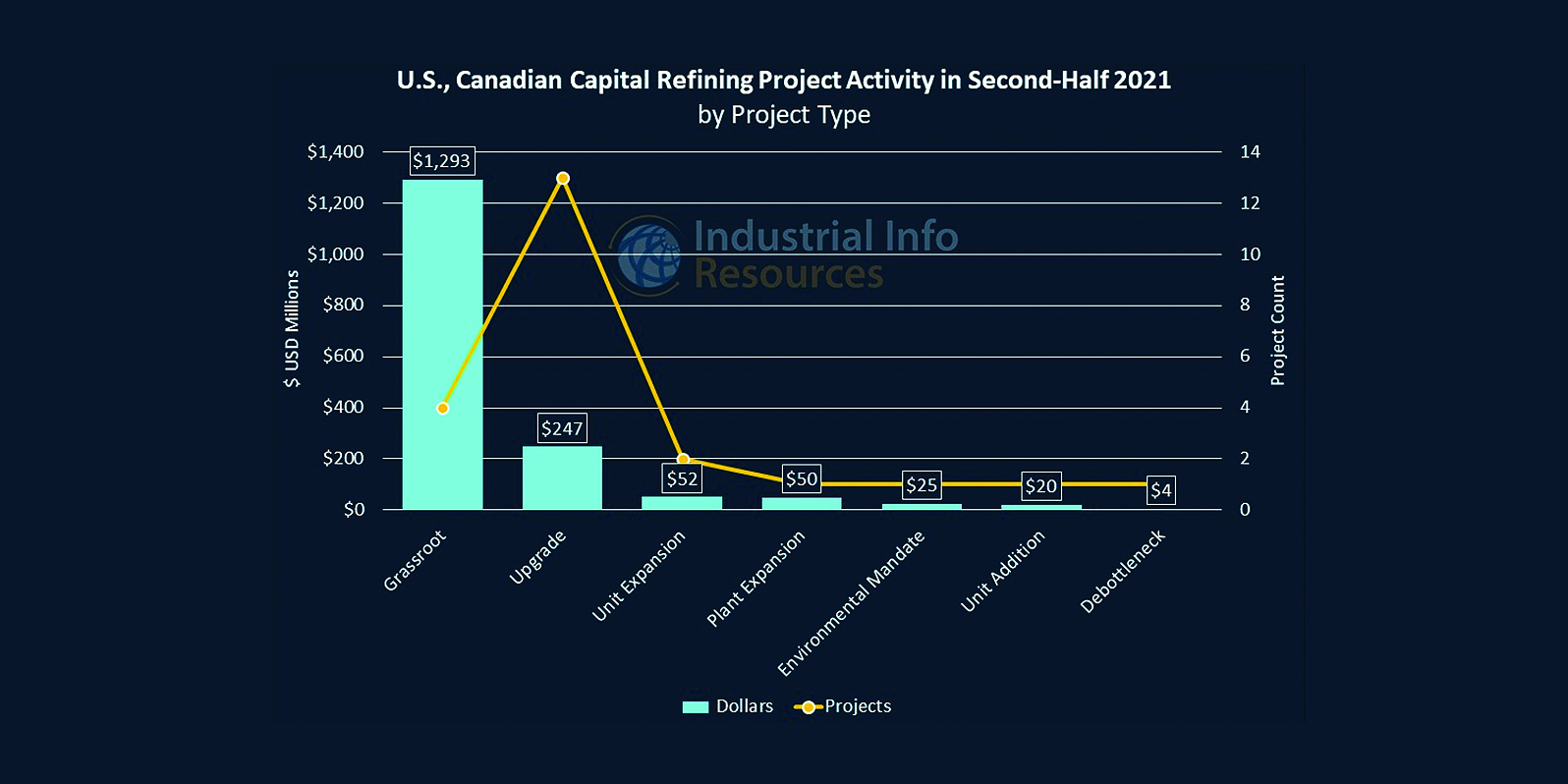 Dozens of renewable energy sector CEOs are asking the Biden administration to repeal the tariff placed on solar panel imports.

Another possible avenue opening up is electricity exports from Canada. Canada is the world’s third-largest producer of hydropower, and Prime Minister Justin Trudeau highlighted an interest in increasing hydroelectricity exports to the United States.

Transmission spending is expected to increase in 2021 and 2022, in excess of $28 billion. But the drivers remain the same — namely, connecting disparate and remotely located new solar and wind-generation facilities and replacing aging equipment.

Lengthy permitting requirements remain a major headwind and greatly extend the timelines for projects. This is especially the case for the larger transmission lines. A minimum of 47 different federal agencies are involved to build a typical new transmission line, all of whom are not bound into a single consolidated and coordinated process. On average, it takes 10 years to permit a new transmission line, with one year for construction.

The energy bill recently passed by Congress set $2.36 billion over five years to be directed toward grid modernizations, integration of renewables, batteries and electric vehicles. The funding also will support cybersecurity investments and includes $1.08 billion for energy storage.

Gasoline demand increased during the first quarter of this year, reaching 85 percent of the demand seen just before the COVID-19 lockdowns in 2020. Industrial Info’s researchers expect a full recovery in demand to take at least two to three years.

At the start of this year, gasoline consumption was 10 percent lower than January last year, at 7.89 million barrels per day (BBL/d). Domestic gasoline was forecast to rise 700,000 BBL/d in the second quarter from the first quarter amid faster vaccine rollouts and readiness for the crucial summer driving season. However, the EIA forecasts that U.S. gasoline consumption will peak by 2023, with a decline thereafter.

With domestic demand starting to return in the gasoline sector, Industrial Info is starting to see some of the previously on-hold projects associated with naphtha and gasoline hydrotreating, reforming units, alky units and fluid catalytic cracking units return to the table.

Diesel-related, in-plant capital expenditures account for almost $1.5 billion associated with hydrocracking and hydrotreating units. This aspect of the refining spending outlook is where we are seeing a major shift from traditional fuels toward biodiesel production. Some refineries are shutting down completely to convert to biofuels, with others opting to add or convert existing production units. This is an area of refining that we expect to have strong and sustained spending going forward.

Part of this broader industry transition is seeing investments to add new or increase production capacity of petrochemicals — this is seen as an opportunity to capture market share of the still-solid long-term outlook for chemicals.

Refiners remain cautious with their capital spending. While margins have improved, there is still a heightened level of uncertainty around the broader demand outlook for refined products.

Capital spending associated with the production of renewable diesel is growing in prominence. These projects are typically associated with retrofits, revamps, conversions and new unit additions

The pandemic also had a major impact on demand for U.S. gasoline and diesel in the top two export markets, Brazil and Mexico.