U.S. generators of natural-gas-fired power gained a clearer perspective on their challenges after Winter Storm Uri.

Industrial Info Resources (IIR) is tracking more than 6,000 U.S. maintenance-related projects, worth $14.4 billion, that list pipe, valves and fittings (PVF) among their equipment key needs and are planned to start construction in 2021.

The spending includes more than $2.8 billion worth of power industry projects (see Figure 1), led by maintenance on natural-gas-fired power plants, followed by nuclear and coal-fired facilities. 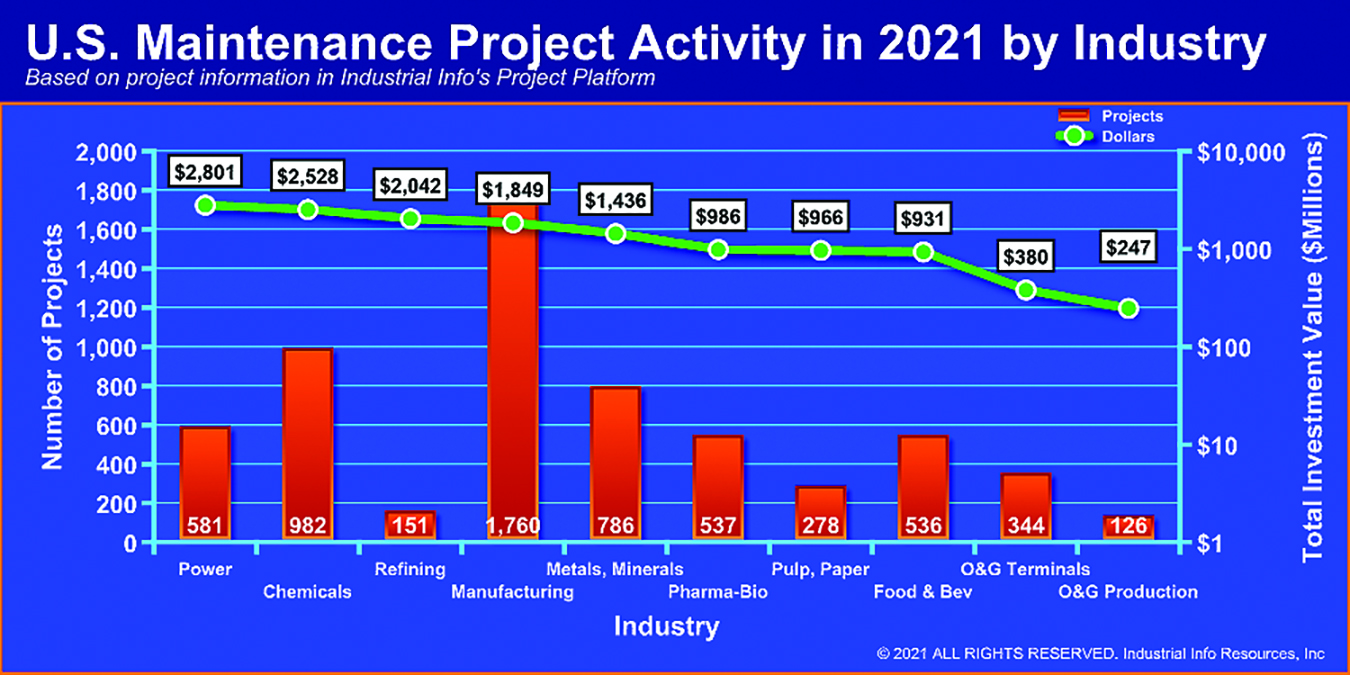 Generators of natural-gas-fired power across the United States gained a clearer perspective on their short-term and long-term challenges this year, as Winter Storm Uri temporarily knocked out units in February, and a growing number of customers are demanding a bigger role for renewables. But utilities continue to see value in natural gas, with many coupling the preservation of existing units with the development of "green" sources.

As of mid-March, IIR was tracking more than $1.2 billion worth of maintenance projects at U.S. natural gas power plants set to begin in 2021, ranging in value from $500,000 to $35 million. Texas leads with nearly $149 million in project activity, followed by California, with $140 million.

U.S. natural gas consumption was lower in 2020 in all sectors except electric power, according to the U.S. Energy Information Administration (EIA). The electric power sector consumed the most natural gas of any sector — 31.7 billion cubic feet per day in 2020, a 2 percent increase from the previous year.

In 2020, natural gas prices were the lowest they had been in decades. The lower prices made natural gas more competitive in the electric power sector, especially when compared with coal. Natural-gas-fired electricity generation has been growing throughout the United States, replacing much of the lost generation from coal plant retirements in recent years. Natural gas accounted for nearly 40 percent of all power generation in 2020, accounting for more generation than coal and nuclear, the next two largest sources, combined.

Also within the power industry, IIR is tracking 47 U.S. planned nuclear refueling maintenance outage starts with PVF equipment needs, worth $972 million, that are slated this year (see Figure 2). Nuclear refueling outages in the United States typically peak in the spring and fall, when energy demand is lower. The maintenance projects range in value from $12 million to $27 million. Illinois leads with five planned outage projects, with a combined value of $103 million. 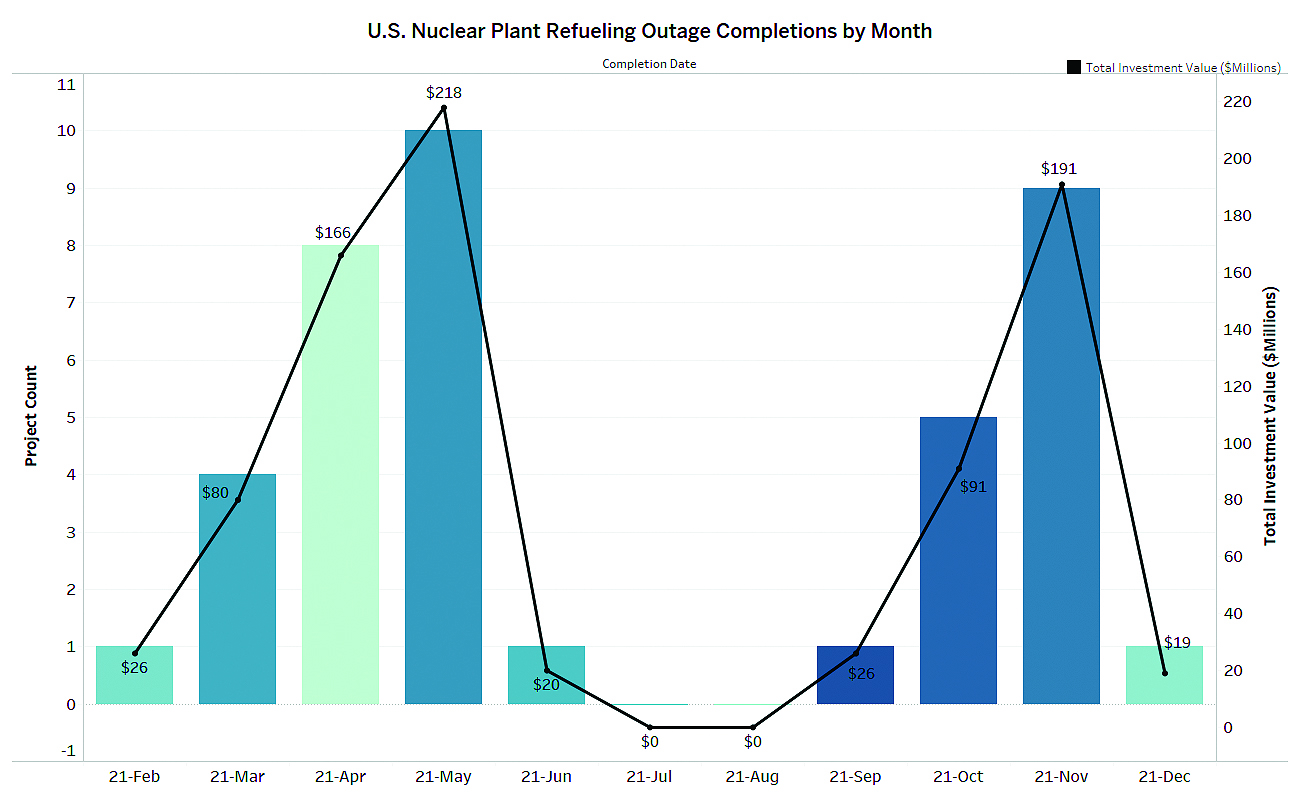 Nuclear reactors are usually refueled every 18 months to two years, during which a third of their nuclear fuel bundle is replaced, according to the Nuclear Energy Institute. Plant operators typically take advantage of the downtime by scheduling upgrades, repairs and other maintenance work while the nuclear reactor is offline, according to the EIA. Each outage can require hundreds of workers. Average planned outage times in 2020 were 33 days as of September, the EIA said.

The EIA notes that 2.7 GW of U.S. coal-fired generating capacity is scheduled to retire in 2021, following 48 GW of retirements over the past five years.

Even so, coal made up more than 19 percent of the nation’s energy mix in 2020, and will remain a substantial player in the power industry. Many of the coal-fired units set for maintenance will not be around in the long term.

IIR also is tracking more than $80 million worth of renewable energy maintenance projects listing PVF among their equipment key needs this year, including hydropower projects. Most of the outages this year are expected to take place in the second and fourth quarters, with peaks coming in May and October, after the chill of winter and the heat of summer.

IIR expects to see the continued buildout of renewable energy in the United States. In addition to the extended tax credits for wind and solar, more than half of the states and the District of Columbia have renewable portfolio standards, which mandate that a certain amount of energy be generated by renewable energy by a specific time.

The Biden administration has said it wants to wean the country off of fossil fuels by 2035. The United States would need to add more peak load and energy storage facilities to support this renewable buildout.

In the chemical processing industry, some of the highest-profile facilities across the country are set for regular maintenance. IIR is tracking more than 900 maintenance projects at U.S. chemical plants, worth more than $2.4 billion, that were set for kickoff this year. Texas leads with nearly $900 million in project activity, followed by Louisiana, with $612 million.

"Last year, we really crunched down the number of turnarounds," he notes during an earnings-related conference call. For 2021, “we'll have about $400 million of higher turnaround spending; $300 million in our core business and about $100 million in our joint ventures."

Hamblet says turnaround and maintenance activity for the industry could increase by as much as $1 billion this year, as companies catch up on work deferred from last year.

"I think this sets the stage for potential challenges for resources, materials, deliveries and manpower," he cautions. "It's not to say it can't be done. We don't have the same level of grassroot construction we had in earlier years, but it would be a very remarkable year for the industry if we saw a billion-dollar increase in such a short period of time."

The American Chemistry Council’s (ACC) U.S. Chemical Production Regional Index rose 0.8 percent at the start of this year, with chemical output expanding in nearly all regions. The ACC’s Chemical Activity Barometer continues to rise, consistent with the expansion of the U.S. economy.

Despite the overall improvement in market conditions this year, the geographic heart of the U.S. petrochemical sector — the Texas and Louisiana Gulf coasts — suffered a significant setback in February from Winter Storm Uri.

The major freeze that gripped the region disrupted schedules for previously planned maintenance turnarounds. Hundreds of chemical plants across the region suffered damage from broken pipes, damaged valves and failed instruments, and many chemical plants were offline for weeks

IIR is tracking more than 120 U.S. petroleum refining maintenance projects, worth $1.9 billion, with PVF equipment needs that were planned for the year.

During the COVID-19 pandemic, many refineries made unplanned production cuts as state-imposed restrictions cut into demand for refined products. However, the availability of COVID-19 vaccines could mean the U.S. refining industry is turning a corner.

U.S. refinery runs in early 2021 were slightly more than 80 percent of what they were prior to the pandemic, but it could be some time — a year, at least — before North America returns to its pre-pandemic demand levels.

Refinery executives have been conservative about their turnaround spending plans amid the lower refining rates caused by the pandemic, but as markets stabilize and margins recover, more capital will be freed up for turnarounds.