As environmental, social and governance (ESG) initiatives continue to gain momentum in support of the energy transition, refiners, especially in the United States and Canada, are increasingly looking toward producing renewable diesel and sustainable aviation fuel (SAF).

Industrial Info Resources is tracking more than $24 billion worth of high-and-medium probability renewable diesel and SAF projects (those with a 70- to 99-percent chance of moving forward as planned) in the United States and Canada listing pipe, valves and fittings among their key equipment needs (see Figure 1).

Worldwide, Industrial Info is tracking more than $50 billion worth of active capital-spending projects for producing renewable diesel and SAF.

Regardless, 22 planned units will be able to produce SAF exclusively or in combination with renewable diesel, and 32 of the planned units are within an existing or former petroleum refinery — especially those in the United States that are closed and slated for full conversion from fossil-fuel production.

Shell plc (London) is converting its Convent Refinery in Louisiana to a low-carbon fuels plant after shutting the refinery down in November 2020 when it became unprofitable following demand destruction from the COVID-19 pandemic. Construction is expected to kick off in early 2024, with completion in September 2026.

Marathon Petroleum Corp. (Findlay, Ohio) shuttered its Martinez Refinery near San Francisco in 2020 and plans to convert the facility into a combined oil terminal and renewable diesel plant. Marathon is already at work on the $550 million Phase 1 conversion, with Phases 2 and 3 to follow.

The company expects the facility to start production later this year with an initial capacity of 260 million gallons/year from various feedstocks, and another 470 million gallons/year when the other phases are complete by the end of 2023. The project is a joint venture with Neste Corp. (Espoo, Finland), the “world’s largest” producer of renewable diesel and SAF refined from waste and residues, according to the company website.

Several other major U.S. refiners are moving to renewable diesel production, including Phillips 66 (Houston) with the $600 million Rodeo Renewed project at its refinery in Rodeo, Calif., near San Francisco. The project entails converting the refinery to produce an initial 800 million gallons/year of renewable transportation fuels, including renewable diesel, renewable gasoline and SAF. Commercial operations are expected to begin in early 2024.

Chevron Corp. (San Ramon, Calif.) also is jumping into the market with its acquisition of Renewable Energy Group (REG; Ames, Iowa) for $3.15 billion, which closed in mid-June. Last year, Chevron announced it would more than triple its investments in renewables to about $10 billion through 2028, including about $3 billion on renewable fuels. 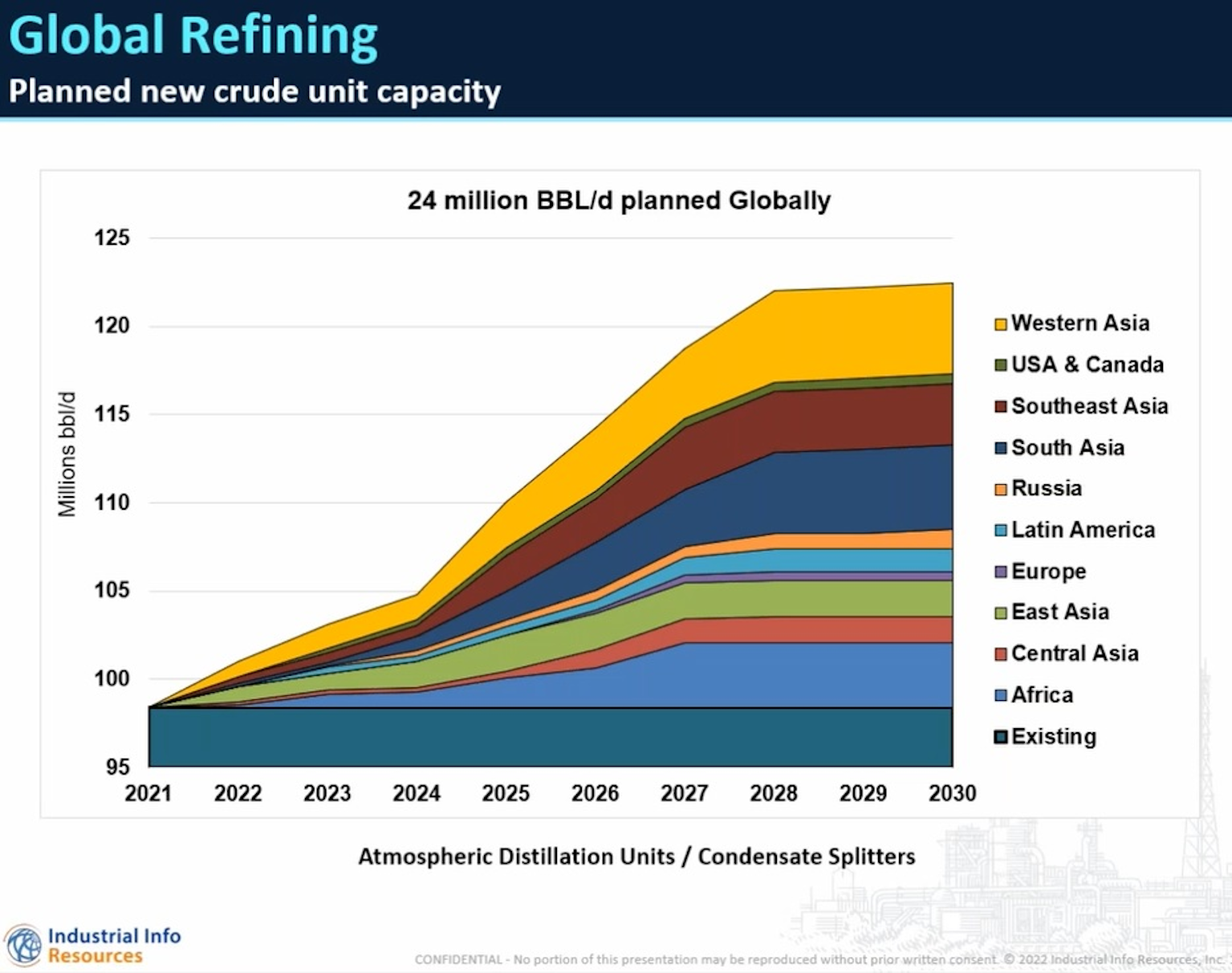 REG began construction in October on $950 million worth of upgrades and expansions to its renewable diesel plant in Geismar, La., increasing the site’s production capacity from 90 million to 340 million gallons/year. Completion is expected by the end of 2023.

PBF is planning a substantial investment for a new renewable diesel facility at its site in Chalmette, La. The refiner says it had invested about $52 million to “continue progress and incubate the project,” with the goal of being in production in the first half of 2023. PBF says it continues to seek a partner on the project, which involves renovating and replacing parts of a hydrocracker, which was mothballed in 2010, to produce 20,000 barrels/day (BBL/d) of renewable diesel.

In Canada, Cielo Waste Solutions Corp. (Vancouver) expects to kick off construction of a $116 million brownfield renewable-diesel refinery in Fort Saskatchewan, Alberta, in late 2023. The plant would use proprietary technology to process various wastes into 100 million liters/year, or 26 million gallons/year, of renewable diesel, SAF or marine biofuel.

“Feedstocks for renewable diesel are plant-based, such as corn, soy and palm oil,” she notes. “They also use animal fats and cooking oil. So, the variability of plant-based feedstocks is similar to crude: you don’t have a stable supply because it all depends on planting seasons and weather.

The International Energy Agency (Paris) expects global demand for biofuels to grow 28 percent over 2021-2026, thanks to post-COVID-19 demand recovery in the near term; in the future, it’s mainly due to government policies supporting the growth. Policies in the United States and Europe are nearly tripling the demand for renewable diesel (also known as hydrogenated vegetable oil [HVO] in Europe).

European investments are gaining momentum, according to Hamblet. Europe trails only the United States in total investment value for renewable diesel and SAF projects. Neste Corp. expects to kick off construction in November of a $1.58 billion unit addition at its grassroot biorefinery in Rotterdam, Netherlands, to produce HVO and SAF.

Downstream energy company Essar Oil U.K. (Cheshire, England) plans to construct a brownfield plant at its Stanlow Refinery in Chester, England, to convert municipal solid waste to SAF, totaling 30 million gallons/year. The biofuel would then be transported to Manchester Airport through an existing pipeline at the Stanlow site.

In the aftermath of the COVID-19 pandemic, demand for refined fuels plunged, prompting a wave of refinery closures and lower usage rates. For this reason, crude oil producers reduced their drilling activity and shareholder demand to practice fiscal discipline.

Now, with the return of gasoline and diesel demand, the world faces a shortfall in overall refining capacity. In addition, many refiners, particularly in the West, are restructuring their asset base to help meet ESG initiatives. With this in mind, spending at refineries is relatively strong, although the type and amount of spending vary greatly by region.

The world has an operational refining capacity of about 98.4 million BBL/d. Industrial Info is tracking about 24 million BBL/d of capacity that is planned to be brought online in the future, although it is highly unlikely it will all be built (see Figure 2).

For this year and 2023, Industrial Info is tracking about 4.7 million BBL/d of new capacity. However, some of this will simply be replacing barrels lost due to closures.

Industrial Info also is tracking $201.2 billion in planned capital project spending in 2022-23 for refiners throughout the world.

In North America, ESG-geared spending represents more than $3 billion, on top of crude slate flexibility and maintenance. North American refiners also are trending toward more gasoline production rather than diesel.

South Asia leads the globe in overall refining project spending, with approximately $45.5 billion, but much of this spending is geared toward petrochemical production at refineries as demand for plastics and other chemical products skyrockets.

The Middle East and developing nations are adding most of the planned grassroot capacity. In the West, the focus is primarily on in-plant spending at existing plants for ESG initiatives and, particularly in the United States, to broaden a facility’s crude slate to take advantage of more domestic products rather than imports. There are no planned grassroot refineries in Europe and very few on the table for North America.