When Does Digital Mixing Make Sense?

Scale durability, temperature creep prevention and automatic thermal disinfection are a few reasons to use DMVs to control DHW temps.

A thermostatic mixing valve is a workhorse. Used for domestic hot water temperature control, they have been around for decades. Millions are installed globally and they haven’t changed dramatically. They are generally accurate enough, require no power and, with good water quality, can be very durable.

Digital mixing valves, on the other hand, are newer to the industry. They require power to operate, are controlled electronically and, size-for-size, are more expensive than their thermal counterparts. Yet, digital mixing valves are rapidly gaining in popularity over thermostatic mixing valves, particularly in commercial applications.

Why so popular? Besides having some type of display or user interface to show system temperatures and other performance values, they also offer these key advantages:

Let’s compare DMVs to TMVs in design and application to further examine when it makes sense to use a digital valve.

Figure 1 shows a cross section of a TMV that’s representative of most industry designs. It incorporates a thermostatic sensor “motor” as its controlling element. 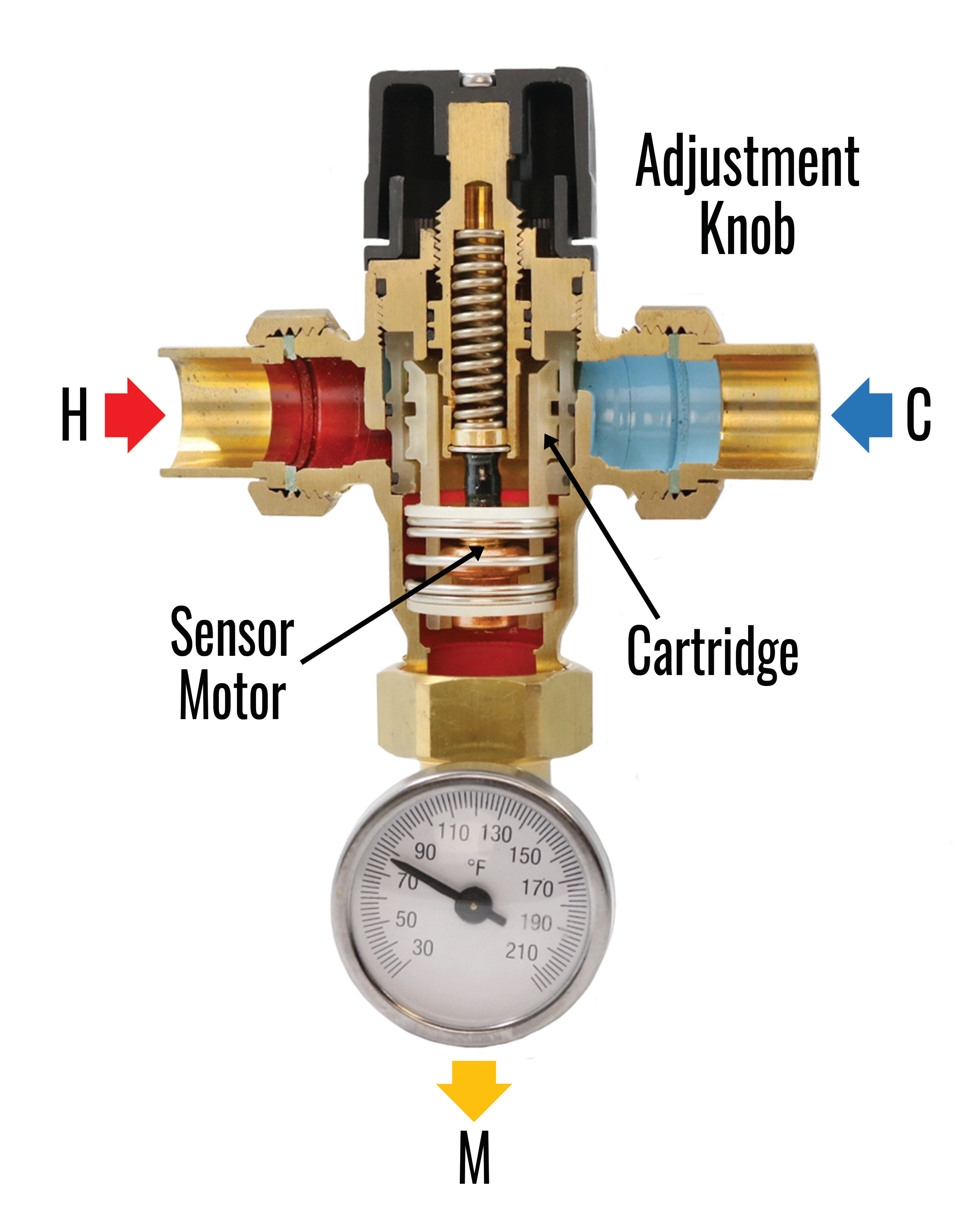 The sensor is immersed in the mixed water as it flows into the valve from the hot and cold inlet ports and out the mix port. As the surrounding water temperature varies, the sensor’s sealed wax expands and contracts to move the mixing cartridge between hot and cold.

A rise in water temperature causes the element to drive the internal cartridge toward closing the hot inlet port while simultaneously opening the cold port. Cooler water causes the opposite action. Flow from the mix port is the sum of the two proportional flow rates at the hot and cold inlets.

Turning the set-point knob varies the internal spring forces that oppose the thermostatic sensor's linear expansion movement. Together, the sensor and springs are calibrated to deliver a stable temperature at the mix outlet.

However, if the water has hardness, scale from dissolved calcium or magnesium can come out of solution and form on the sliding surfaces. The hotter the water and higher the hardness, the faster scale can form.

A light scale film is generally not a problem for the force generated by a thermostatic sensor motor to “wipe clean.” But the longer the scale is allowed to form or the more quickly it forms, the more difficult it becomes for the cartridge to travel unimpeded; eventually, the valve loses stability. The symptom shows up over time and can cause erratic temperature swings. Scale is the leading cause of thermostatic mixing valve malfunction.

Digital valves are typically more stable in hard water conditions, especially ball-type mixing valves. One reason is their electrical motor/gear mechanism can generate significant force to overcome scale friction. As scale begins to form, the ball turns and the circular seat ring material wipes its surface like a windshield wiper cleaning the glass.

For added reliability, some valves have a feature called “anti-clog,” which rotates the ball once per day through a complete open/close stroke to scour away any scale film between the seat and ball surface. This assures smooth operation and highly reliable mixed temperature control, even in hard water conditions. Perhaps the most common use for a digital mixing valve is to replace a thermostatic mixing valve that failed due to scale.

The valve includes a controller with an analog input for the mixed water temperature sensor and a modulating output that positions the mixing valve actuator. The controller reads the sensor input (via a variable resistance element) and calculates the difference between that mixed temperature value and a set-point value (a software setting in the controller).

Based on that difference, the output signal then positions the valve to bring the sensed value closer to the set-point value. Then a new temperature delta reading is taken and the process repeats. This is closed-loop control and produces a highly responsive adjustment as water temperatures change.

Point-of-use mixing valves used in North America, whether thermostatic or electronic, must comply with ASSE Standard 1017, Performance Requirements for Temperature Actuated Mixing Valves for Hot Water Distribution Systems. In the standard, valve accuracy requirements are based on the flow rate at a defined pressure drop.

Per ASSE 1017, a valve rated 6 gallons/minute is allowed to vary plus/minus 5 F. Though this variation is acceptable to meet the standard and most applications, most DMVs can control to a much tighter range.

Temperature creep refers to a condition that can occur in recirculation systems using a point-of-distribution mixing valve and recirculating continuously. When the circulator is operating and no water is being drawn at the fixtures, the system becomes a closed loop. No cold water can enter the system, so the valve must maintain temperature using only the recirculating water and storage water.

If the mixing valve does not close off the hot inlet port 100 percent (which is a design detail in almost all TMVs on the market, as well as some DMVs), it can allow more heat to be pushed from the storage tank and through the TMV to the system than is given up to ambient by the recirculating water. This leads to the recirculating water temperature slowly increasing — possibly reaching the storage tank's temperature before there is a demand call. The first fixture opened will experience a slug of dangerously hot water unless anti-scald valves are installed.

A common approach for preventing creep is to add two balancing valves, which are labeled return and bridge valves, as in the Figure 2 schematic. Adjusting these valves to allow just enough flow to the tank to match the heat losses in the recirculation piping (preventing creep during no demand) takes some skill and is time-consuming. Unfortunately, too often they are not properly installed and adjusted; temperature creep is simply tolerated. 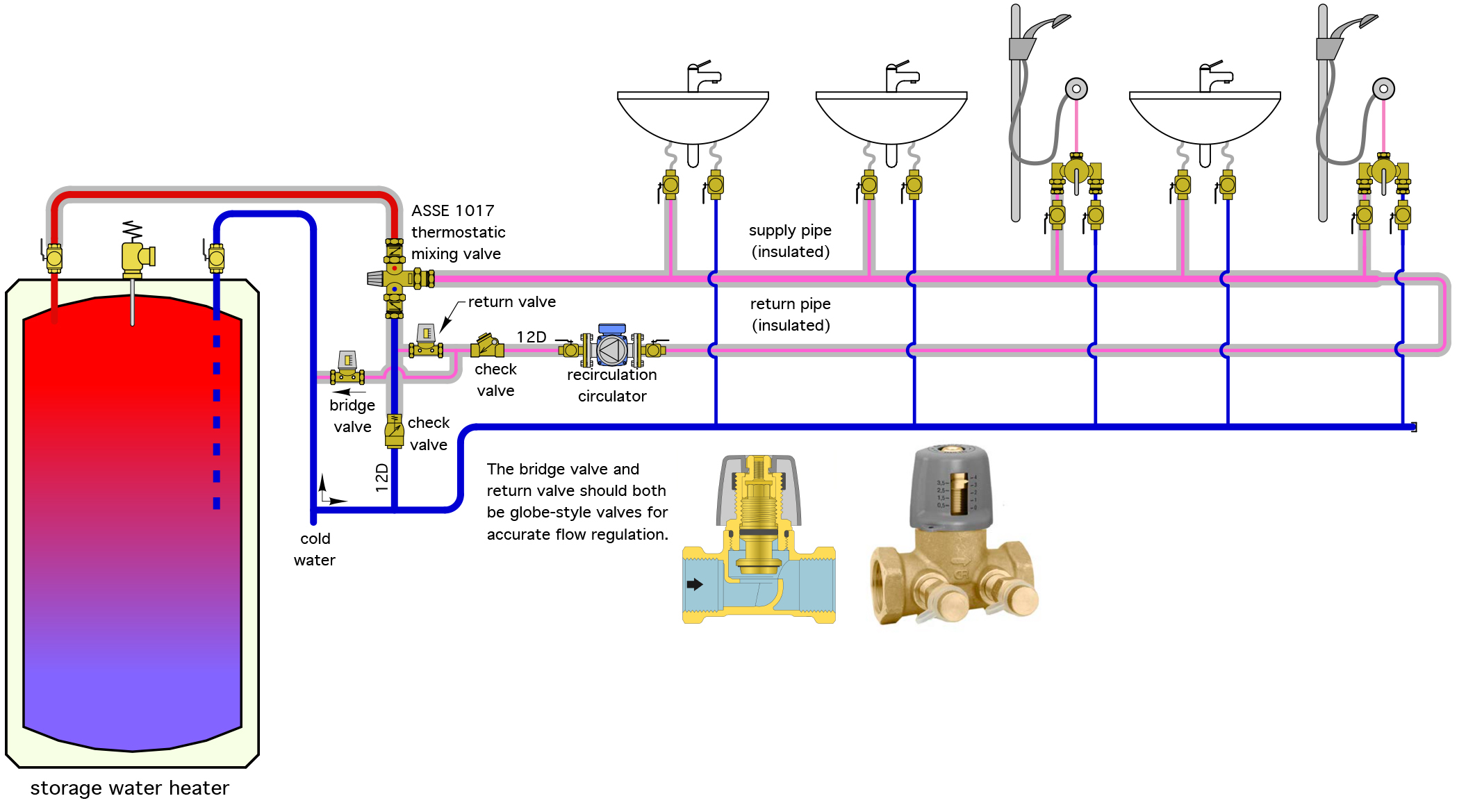 Some DMVs (and only a few TMVs) are capable of closing their hot water port 100 percent. Thus, if the recirculated water starts to rise above the set value, the valve will close the hot port completely. Balancing valves are not needed in this case and piping is greatly simplified. Figure 3 illustrates the straightforward recirculation piping of a DMV system with no potential creep.

Another benefit of DMVs is their ability to remotely communicate with computers and building automation systems. Most electronic controller inputs, outputs and software points are accessible remotely, allowing a building operator to read temperatures, alarms, status, etc.

Many settings can be written, meaning the operator can remotely change the mixed temperature set point. Making this information available to a BAS allows great flexibility in generating custom graphics, reports and maintenance programs, useful in modern smart integrated buildings.

Some DMVs require a computer or smart app to interface with the valve to configure, use and maintain the system. Others allow an operator to perform the functions directly from a user interface on the DMV’s controller, as shown in Figure 3.

Some controllers can log data and display it at the user interface or share it via remote access. This is a very handy feature for proof of performance or for the operator to view current performance conditions on sight. This is especially important for health-care facilities which must meet the requirements of the Joint Commission, or facilities which must adhere to ANSI/ASHRAE Standard 188 Legionellosis: Risk Management for Building Water Systems.

Legionella is the most problematic pathogen to contend with in a plumbing system. There is a relationship between temperature and time, relative to killing Legionella bacteria. At 160 F, for example, they are killed almost instantly. DMVs can perform thermal disinfection of Legionella, something not practical with most TMVs, except perhaps by implementing a fully manual procedure.

Disinfection is typically done at night during low demand periods. It must only be implemented when all fixtures in the hot water system intended for human interface have anti-scald protection. Any time the recirculation water is controlled at temperatures above 120 F, anti-scald valves are mandatory.

Some DMV models can perform fully automatic, scheduled thermal disinfection. The program is straightforward. For example: Monday, Wednesday and Friday, between 2 and 3 a.m., increase the mixed temperature set point to 160 F and verify that the return temperature exceeds 140 F for a total of 30 minutes.

With outputs to the circulator and hot water source, the controller automatically activates this program and monitors the return temperature to prove a successful disinfection cycle. Once complete, the data is logged and the controller automatically returns to normal operation. If for some reason, the cycle is not successful, an alarm is generated and logged. The results can be viewed on sight or remotely.

As long as the building DHW system is designed for the application, thermal disinfection can be safely and effectively implemented. Because it requires no additional equipment or chemical additives, thermal disinfection is the most cost-effective, eco-friendly and safest approach to control Legionella in commercial DHW recirculation systems. It’s been used in Europe and other parts of the world for many years and has only recently begun to be implemented in North America.

When ANSI/ASHRAE Standard 188, Legionellosis: Risk Management for Building Water Systems, is adopted into building water system design specifications, a DHW system designed around the principle of thermal disinfection is an excellent choice for the building stakeholders to make as part of their water management plan.

TMVs will continue to be the most common mixing valve in the market for years to come. For most residential and many commercial applications, they meet the designer’s requirements and the project's needs.

When Does Digital Mixing Make Sense?