2020 Plumbing Engineer of the Year

When asked to describe himself, Paul Baker, P.E. provided adjectives such as reliable, approachable and helpful. These descriptors were in line with the kind words that came from his colleague at Jacobs Engineering Group who nominated him for this honor.

“It is a pleasure and honor to work with Paul. He is truly an engineer. The one who cares for the details. He not only cares about the ‘big picture’ but the details that make the picture work,” said Camilo Rodriguez, EIT, CPD. “As a mentor, he knows all the rules of thumb, of course. But, he is constantly encouraging the engineers to do the work, look up the numbers, run the numbers, and understand that math never lies.”

Baker works in Jacobs’ Fort Worth office. He has lived in the city for the past twelve years after spending the majority of his life in Pittsburgh, Pennsylvania. Opinionated. Willing to listen to new ideas. Reasonably pleasant. Open to any questions. These are more self-descriptors that Baker provided to Plumbing Engineer. Meet our 2020 Engineer of the Year for yourself in the interview that follows.

PE: What is your academic background?

PB: I graduated from Lehigh University in Bethlehem, Pennsylvania in 1975 with a B.S. in Mechanical Engineering.

PE: How did you get into the plumbing, heating, cooling and piping (PHCP) industry?

PB: When I was in college, in my sophomore year, I tried to get internships with engineering firms in Pittsburgh. George Parros, of Parros and Cost, Inc. (P&C), hired me on as a summer intern. P&C did specialty HVAC and plumbing for K-12 schools, university buildings, and hospitals. 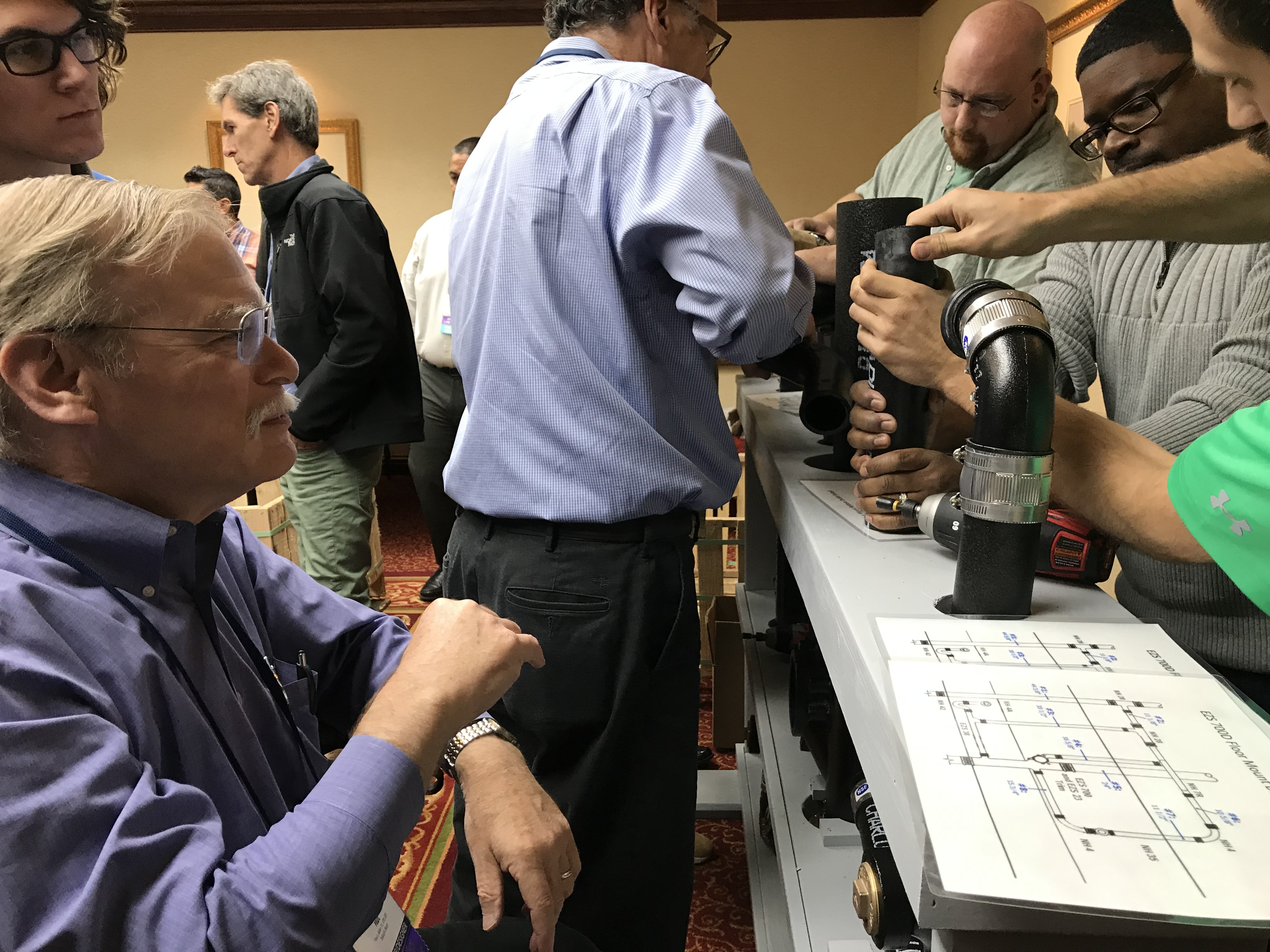 PE: Why did you decide to enter a career in the PHCP industry?

PB: Mostly because of my internship. No one in my family was involved in engineering.  My father and brother were in sales. My mother was a bookkeeper. Even in my extended family, no one was in engineering. The closest was on my mother’s side of the family. My grandfather and two uncles worked for Bell Telephone, likely as technicians.  I originally thought I wanted to design automobiles, but my internship was in HVAC. I did work for five years coming out of Lehigh at United States Steel Corporation. I designedbelt conveyors and machines for blast furnaces. But, I was anxious. Mr. Parros hired me, as he was planning on retiring or at least slowing down.

PE: What professional titles have you held throughout your career?

PE: What is your professional title now and what do your duties entail?

PB: I go by Senior Mechanical Engineer. Years ago, I was asked to become the plumbing department manager, basically. I knew some things about plumbing, but I wasn’t in-depth with it. So, I started reading and reading some more. And, meanwhile we were doing projects and getting them out the door. I sort of became our local subject matter expert on plumbing, HVAC and many other mechanical things. Now, on top of that, I do my day-to-day design and build specifications, drawings, specs, and so forth. Jacobs is an S&P top 200 company. It has No. 1 rankings in many A/E categories. One of the advantages of working at a large company is that the firm is able to take on large projects. At Jacobs, we’re a multidisciplinary firm. We do the architectural, structural, plumbing, HVAC, electrical, and other disciplines. So, we have to make sure the left hand knows what the right hand is doing so the owner gets a complete package. I do a lot of the quality review stuff. And in my spare time, I read up on stuff. I’ve been reading Plumbing Engineer religiously since about 2008. I look forward to it showing up in my mailbox.

PE:What do you consider your professional specializations?

PB: With my company, if we get an “oddball” special design, such as paint booths, extreme vacuum, high pressure natural gas, my company’s leadership will come to me with the problem.

PE: What are your top three career highlights?

Next, creating a 16-year relationship between the firm, Eichleay, and General Motors (GM). We had received a blanket order to perform environmental work for GM, but the work involved replacing CFC chillers. We prepared studies and feasibility analyses on how to perform some of the more complicated replacements.Later on, I worked with GM to prepare design-build contracts for their central utility plants. This involved developing heating and cooling loads for their stamping plant, body shops, paint shops, and assembly plants. We selected chiller, boiler, and air compressor plants as well as reverse osmosis equipment, and water treatment equipment.

Finally, and this is really nerdish, but around 1994 I took a class in Visual Basic. Visual Basic has replaced the compute language that was used in early Lotus and Microsoft Excel. With Visual Basic, I was able to develop many user-defined functions. Initially, I developed psychrometric functions to assist me in determining the energy consumptions used in automotive assembly plants by integrating those functions over 8,760 hours per year. I also recreated pressure drop calculations for gases and liquids.  When I moved into plumbing, I had conversions for fixture units to gpm and also created user defined functions for most of the equations in the CPD manual. Most functions work in forward and reverse. This is part of the “work-smarter-not-harder” mindset.

PE: What professional organizations, events, etc. are you involved with?

PB: Mostly ASHRAE and ASPE. In the early part of my career, I downplayed the plumbing aspect of design. Then, I was asked to lead our Plumbing Department. I felt I could not tell one of my younger co-workers, “I don’t know,” if they asked me a question.  So, it became a quest to learn all things plumbing. Some experience and many books later, I have found plumbing to be very interesting, rewarding, and important to every project. I also have membership in NFPA. NFPA is another organization where if you are given a project and don’t know where to start they often have a standard concerning the safety aspect of the project.When I was in Pittsburgh, I was the Technical, Energy, and Government Affairs Chairman. It mostly involved inviting local building inspectors to our chapter meetings. It also involved collecting any applications for ASHRAE Energy Awards. Later I was the Program Chairman responsible for setting up speakers for our monthly meetings and setting up technical seminars for the chapter. I personally prepared and delivered 3-hour seminars to the chapter on fan selection and pump selection. For ASHRAE, I prepared and delivered 3-hour seminars on Psychrometrics at two winter meetings. For ASPE, I delivered a 90-minute seminar on utilizing High Pressure Natural Gas Distribution on a Site at a Chapter Product Show. 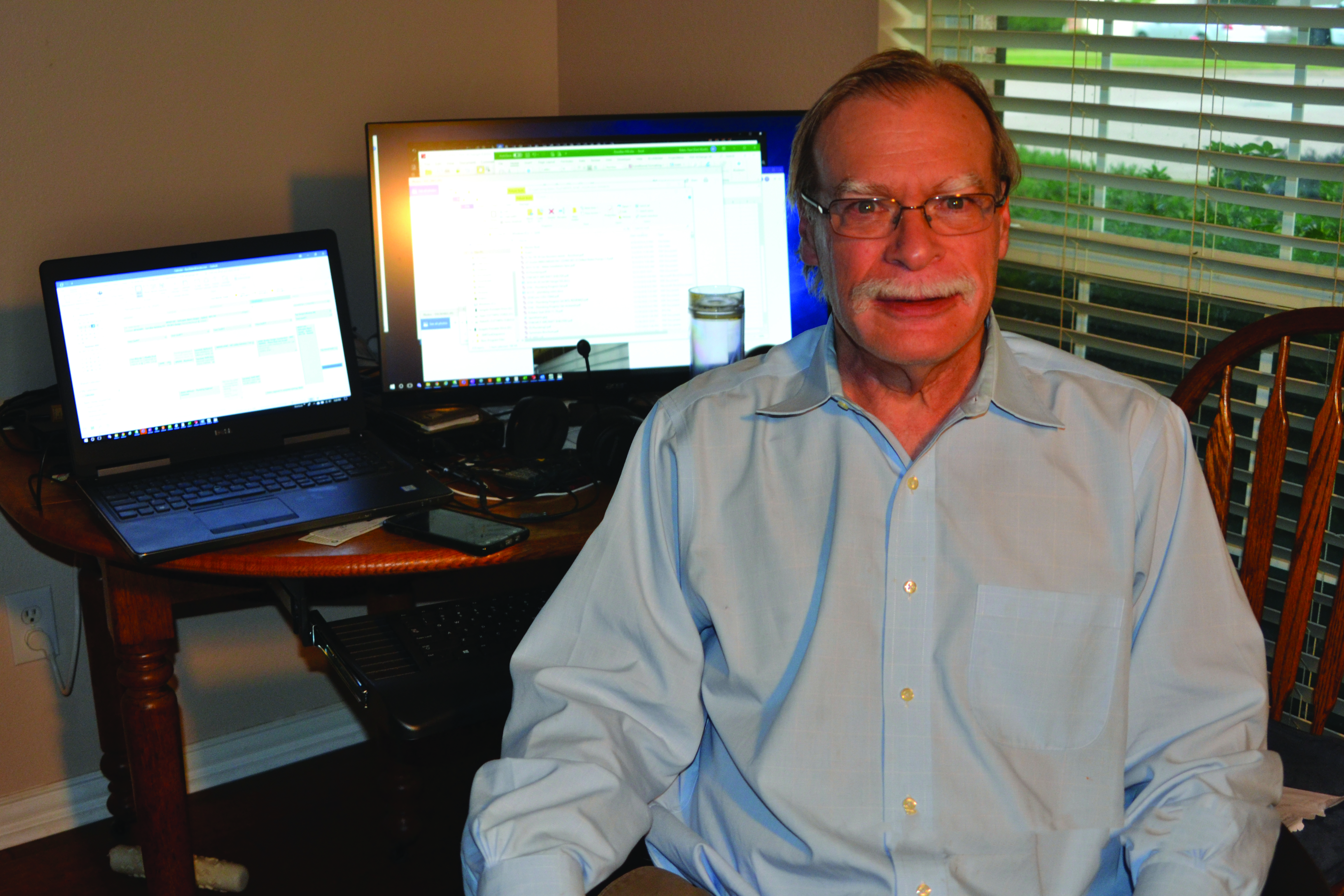 PE: To close on a more personal note, what is your life like outside of work?

PB: I have been married to my wife, Karen, for 43 years. We have two children, Becky and Mallory. Becky is a 6th grade school teacher. Mallory is a mechanical engineer. Both Becky and Mallory are finishers in Iron Man Competitions, the 142.2-mile version. In the old days, I did renovation and home improvement work on my home. But, I am pretty crippled now, so watching NFL football, the Steelers, is my passion. My wife does Newfoundland dog training, so I have been an observer. My wife has also been fostering puppies from local ASPCA.

PE: Is there anything striking or notable that happened to you in 2020?

PB: Being asked by ASPE to be the technical editor for the ASPE PEDH Volume 4 handbook that will be issued in early 2021.

PE: Is there anything you’re looking forward to in 2021?

PB: The end of COVID-19. Going on vacation someplace and seeing my brother and sister in distant cities.

PE: What does it mean to be named the 2020 Engineer of the Year?

PB: I don’t have 25 years of actual plumbing experience. But, I do have 40 years of engineering experience. So, it’s not the kind of thing that I thought I would ever come into in my career. I am humbled that someone would recognize me for this position. I’m getting to be 66 years old and at this point in my life I just want to give back to the engineering community.