Gretna, Nebraska, is considered by many as the state’s current boom town. Its proximity to Omaha, the state’s largest city and Lincoln, the state capitol, has given Gretna plenty of opportunity for growth and its rural surroundings have facilitated the expansion.

The small town more than doubled in size between 2000 and 2017; it is now home to more than 5,000 residents. But with that growth came logistical challenges, not the least of which is accommodating the burgeoning school district.

Foresight on the part of city officials, along with standing relationships among trusted engineers and architects, has ensured that the district’s facilities can support the swelling student population.

In early 2015, Gretna School District tapped Omaha-based DLR Group to conduct a district growth projection, based on incoming housing developments and other factors. The integrated design and engineering firm employs more than 1,200 people in 30 offices across the United States, China, Africa and the Middle East. Educational work makes up a large portion of the company’s portfolio, along with justice facilities, workplace, energy, higher education and sports facilities. 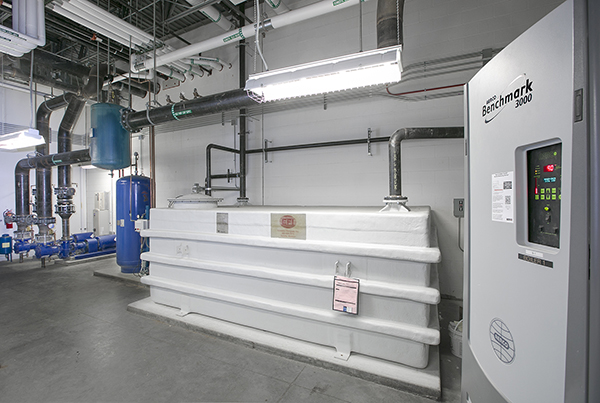 “There’s an ongoing relationship between the Gretna School District and our Omaha office,” explains DLR Group’s Todd Mack, PE, mechanical discipline leader. “We’ve provided architectural and MEP design services for many projects in the school district. The analysis we began in the spring of 2015 ultimately culminated in the occupation of a new, 155,000 square-foot middle school in August 2017.”

Designed for 800 students, the new school’s HVAC system is built around a water-source heat pump system to meet all heating and cooling needs. Trane controls are used for the entire HVAC system.

Due to a superior envelope, the majority of classrooms at the school are conditioned by 24,000 BTUH, two-stage Trane heat pumps, with a total of 96 heat pumps installed.

The cooling side, however, is less conventional. Rather than an open-loop cooling tower, a closed-loop fluid cooler is used. A two-cell EVAPCO eco-ATWB series fluid cooler is installed on an elevated structural-support framing system adjacent to the building’s loading docks.

“The fluid cooler is set up to provide 310 tons of cooling capacity in wet mode,” says James Franks, mechanical engineer at DLR Group. “It’s capable of 350 tons, allowing for some future capacity.” 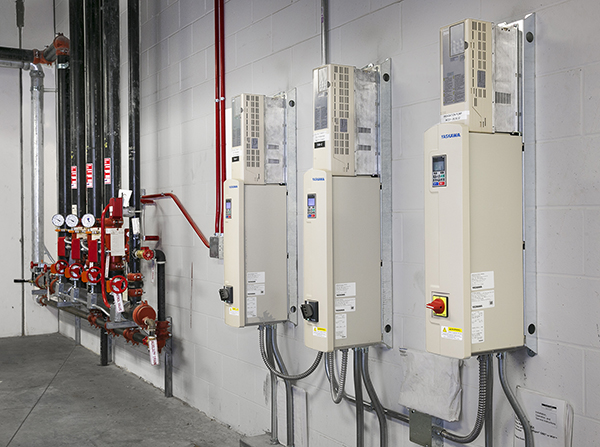 “One of the main reasons we suggested using the eco-ATWB fluid cooler over a traditional cooling tower is that eastern Nebraska has true shoulder seasons,” notes Rick Hollendieck, president of Sys-Kool. “In a climate like this, a heat sink that can operate dry or wet has a real advantage during part-load situations or when the wet-bulb temperature is lower. It dramatically conserves water and reduces sewer expenses.”

But the cost of maintenance was also a factor; first cost wasn’t overlooked either.

The fluid cooler at Gretna Middle School maintains operation in dry cooling mode for as long as possible, providing sensible cooling to the process fluid within the coil.

When the temperature set-point can no longer be met during dry operation, the fluid cooler recirculating spray pump is energized and evaporative cooling is provided. The two-cell fluid cooler has the capability of running completely dry while providing 100 percent capacity of design load with an outdoor air temperature of 44.7 degrees.

“Eliminating an open loop and associated components is a substantial maintenance advantage,” Hollendieck says. “There’s only one piece of equipment to maintain, instead of several.”

Two new technologies featured in the eco-ATWB series fluid coolers — both of which are physical enhancements of the coil itself — were taken into consideration during the planning phase. Ellipti-fin and CrossCool increase efficiency in both dry and wet modes.

EVAPCO’s Ellipti-fin coil design extends the surface area of the fins on the outside of the tube, increasing heat transfer. The coil provides a conservative capacity increase of 25 percent in evaporative cooling over a traditional nonfinned fluid cooler, which allows the unit to be smaller and consume less energy than a traditional cooler. CrossCool features fine, helical grooves inside the coil’s tubing, which create fluid turbulence, increasing the rate of heat exchange and thus the capacity of the unit. 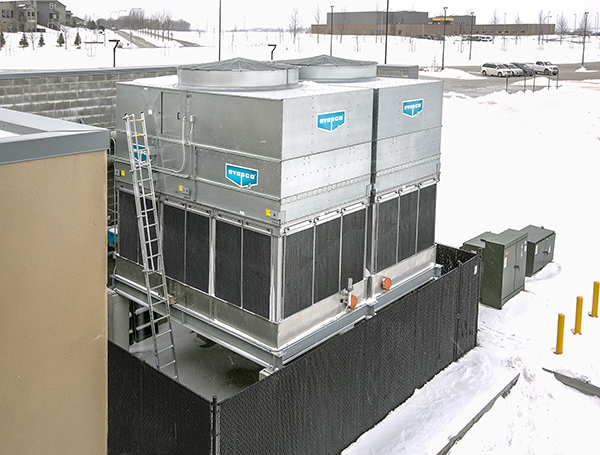 This project is a perfect example of why many design and mechanical firms work routinely with Sys-Kool on projects, which involve fluid coolers or cooling towers. Their intimate product knowledge, and how that translates to in-field advantages, provides a major advantage to the project team.

Sol Lewis, the mechanical contractor, also has worked with Sys-Kool and DLR Group on other large HVAC projects. In business since 1954, the 40-person firm serves the Omaha metro area and focuses on educational facilities and office buildings. It’s carved a niche in the commercial market, in part, because of its in-house steamfitting and sheet metal shop. The company also has been involved with the Mechanical Contractors Association of America for years.

“The MCAA training and seminars our technicians attend help us tackle projects like this, where we installed the entire HVAC system on a tight timeline,” notes Scott Falcone, president at Sol Lewis. “Most of our cooling tower work is in the replacement market, but as Omaha and surrounding towns like Gretna expand, we’re doing new construction and full system installations more frequently.”

The need for final drawings and full-system integration fell squarely on the engineers’ shoulders. DLR Group’s Mack and Franks were adamant that the HVAC system at Gretna Middle School employ a range of proven, best-practice methods and technologies.

"While the Gretna Middle School project doesn't fall within the Omaha plumbing code jurisdiction, we applied an Omaha plumbing code requirement that all cooling tower drains and overflows shall discharge into a special waste sump that is connected to a sanitary sewer,” Mack explains.

Mack notes that the cooling tower drain restriction is not found in all model plumbing codes. “We understand its purpose and felt from a responsible design perspective it was the right thing to do,” he says. “A side benefit to this practice is that it will save the school district money on operations and maintenance.”

At the end of each cooling season, water is drained from the basins into a 2,800-gallon remote sump tank in the adjacent mechanical room. As is often the case in eastern Nebraska, when cooling capacity is needed briefly during winter months, fluid is simply pumped back up to the fluid cooler.

In addition to the environmental impact, DLR Group designed the drain-down system for fluid cooler sump water to reduce the amount of water treatment chemicals needed.

“If not for the remote sump system, treated water would be wasted during drain-down, likely several times each year,” Mack explains. “Over time, the deferred cost of water treatment will offset the expense of the sump tank, with an environmental advantage in the process.”

DLR Group’s design phase began in April 2015 and wrapped up seven months later. Sol Lewis began work on the HVAC system in fall 2016, with a hard deadline of August 2017.

“Gretna Middle School is a large facility, larger than most of the schools we have in the area,” Falcone says. “All the trades involved worked hard to accommodate the tight timeline.”

In the end, a well-trained crew with ample support finished the project in time for occupation before the new school year.

Systems have performed admirably; occupant comfort is high and the school sees fantastic operating efficiencies in both the heating and cooling seasons.