PPI Announces Projects and Members of the Year

The Plastics Pipe Institute (PPI) has announced the winners of its Projects and Members of the Year program during its annual meeting held on May 5. A Project of the Year and a Member of the Year were selected for each of the five PPI divisions: Building and Construction, Drainage, Energy Piping Systems, Municipal and Industrial, and Power and Communications. The meeting was conducted online due to the COVID-19 pandemic. PPI is the major North American trade association representing all segments of the plastic pipe industry.

“This year was a little different for us because it was the first time we could not physically congratulate each winner,” said PPI President David Fink. ”But just as in years past, the nominated projects in each of our five divisions were remarkable and the winners exceptional. It was a healthy competition, and that must be very satisfying to the winners.”

The association’s annual awards program recognizes projects and members for exceptional contributions to the industry. Submissions in the association’s divisions are reviewed, evaluated and voted upon by the PPI members.

The following are the PPI winning projects and members: 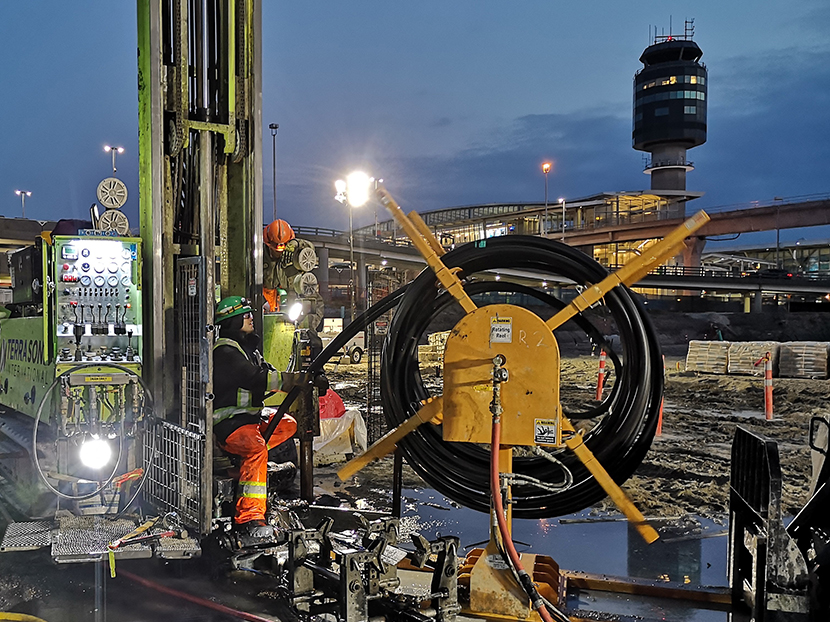 The Vancouver International Airport’s new Central Utilities Building (CUB) will improve efficiency by centralizing all of the equipment needed to meet the airport’s heating, cooling and electrical demand. To achieve this goal, the project will rely on one of the largest Geoexchange systems in Canada. Geoexchange technology uses the earth's renewable energy, just below the surface, to heat or cool buildings. This system will provide sustainable heating and cooling for the terminal.

The original storm drainage design for the new terminal incorporated reinforced concrete pipe and concrete box culverts. During the design phase of the project, the engineer became concerned about joint separation and the potential for infiltration due to predicted sub-surface soil settlement along the Cooper River. In order to mitigate joint separation and possible infiltration, Advanced Drainage Systems’ HP Storm Polypropylene Pipe was selected as the storm drain conveyance pipe for the entire project due to its ease of handling, extended joint, double gaskets, and flexible design. As a result of the redesign, some 27,000 feet of ADS HP STORM was used to convey all storm water on the 280-plus acre site. 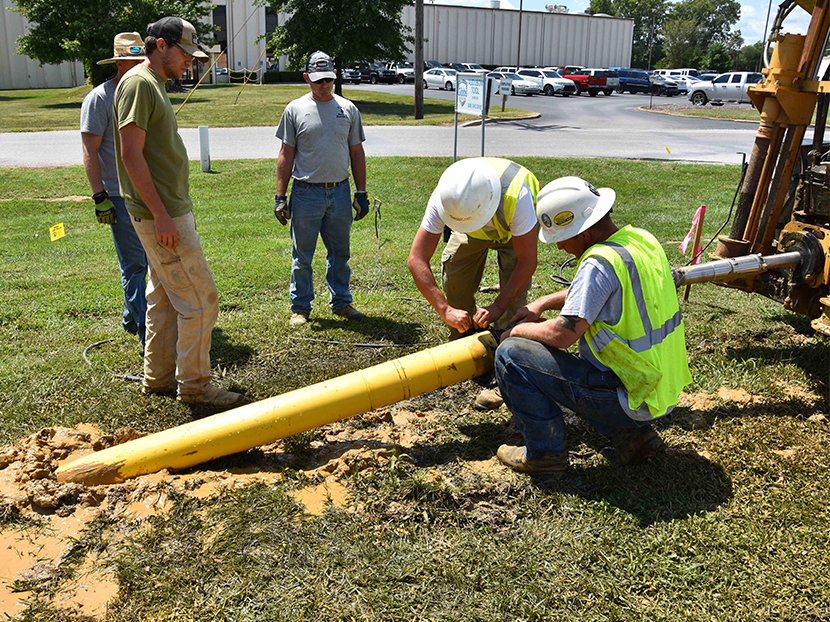 In a multi-stage project, the city of Henderson, Kentucky, installed 2,720 feet of polyamide 12 (PA 12) gas pipe extruded by Teel Plastics. This marked the first PA 12 installation under the PHMSA Mega Rule effective January 2019, which allows PA 12 to be installed without a special permit.

HMG installed the pipe through an industrialized area of the city. To minimize disruption to businesses, Henderson installed it underneath driveways and existing utilities. HMG buried sections using horizontal directional drilling (HDD), pulling the pipe through bored holes and fusing the sections together. More ductile and much lighter than steel, PA 12 made the HDD installation much easier than it would have been with steel pipe. 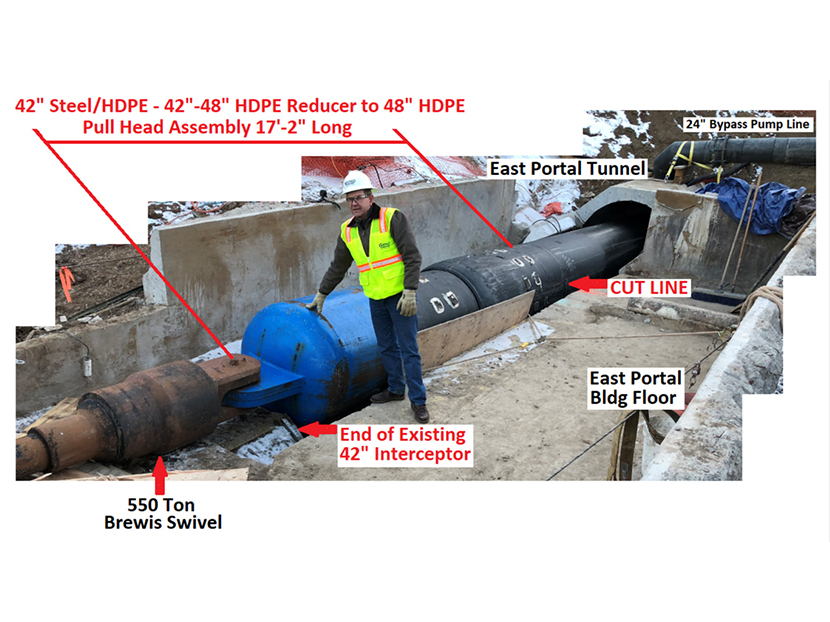 To rehabilitate a deteriorating brick sewer, 48-diameter HDPE pipe was sliplined into the old sewer. Flow was not allowed to stop during the pull, so a custom completely sealed pull head had to be designed and built so that sewage would not fill the drill string during the pull in. Another restriction was that the staging area only allowed for no more than 200 feet of pipe to be out of the tunnel at once. So, the pipe string was pulled as each stick of pipe was fused and added to the string of pipe. Total pull length was more than 8,000 feet. A custom winch system was brought in for the heavy pull that included two spools of wire cable to get the length required. 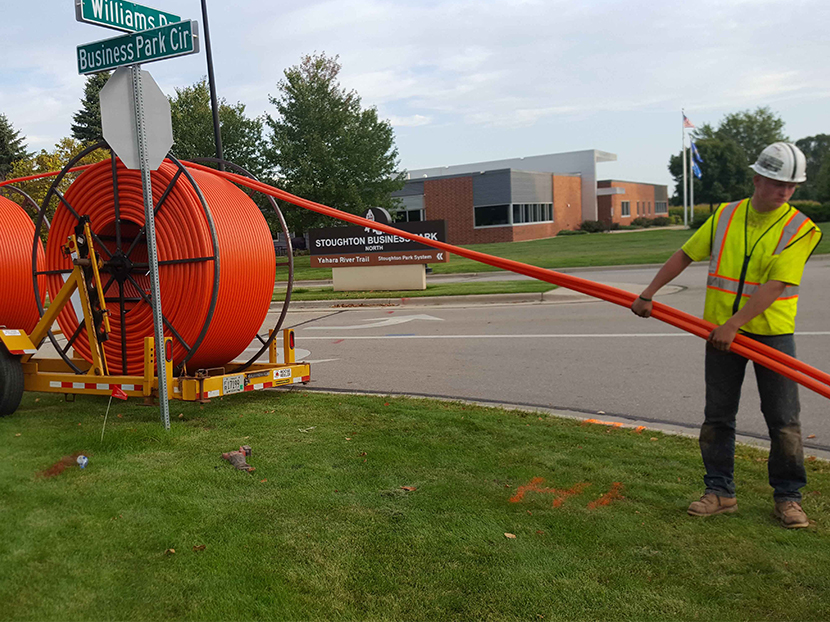 Teel conduit is being installed across Alliant’s service area in Iowa and Wisconsin to improve its telecom network’s security, speed, and reliability. For a utility with a large service area including more than 970,000 electric and 420,000 natural gas customers, reliability and capacity are crucial during critical events. The conduit will protect the existing infrastructure and allow for later expansion of network capabilities while providing cost savings to Alliant Energy.

The cost savings associated with installation of the conduit and fiber benefits Alliant Energy in multiple ways. Replacing its telecommunication carriers with their own network will protect them from future price increases. Alliant Energy will also decrease its reliance on over-the-air communication, such as microwave radios. In addition, the fiber optic network serves as a gateway for Alliant Energy to work on advances in energy efficiency and technology, which would not be possible without a private fiber network.

Paschal has been chair of the PPI Polypropylene Pressure Pipe Steering Committee since its inception in 2017. He has led efforts to update product standards for polypropylene piping systems, and is working to develop a new ASTM test method for PP-R and PP-RCT materials. Paschal has been instrumental in defining the type of work to be initiated and keeping members engaged.

Drainage Division Member of the Year

Leason is concluding his term as management committee chair where his leadership broadened membership engagement on many levels. While MC chair, he successfully led the division through its first strategic planning process and to complete the Drainage Handbook content and posting it online.

Doyle has continually helped the division gain new members, and in 2019, due to his efforts, seven companies joined. During his six years as a PPI member, he has also actively participated in efforts to ensure only the highest quality HDPE products are in the market. Amongst his other contributions, Doyle has been part of the PPI group contributing to American Petroleum Institute’s standards, and was vice chair of the division’s management committee and will now serve as chair.

Houston has served PPI and the Municipal and Industrial Division for many years on task groups, committees and chair positions. In 2020, she is leading the MID efforts to effectively expand the division’s marketing efforts by serving her second year as MID marketing chair. Houston was also instrumental in helping to introduce polyethylene piping to the U.S. Conference of Mayors, serving on that committee from 2006 to 2015. She also led the association’s Umbrella Marketing Committee serving as chair from 2009 to 2011, and again from 2015 to 2017, plus led the division’s support of the Municipal Advisory Board.

Power and Communications Division Member of the Year

As the Power and Communications Division’s research and development committee chair, Stewart has been instrumental in the smooth transition between staff engineers. During the past year, he has directly led three projects and is an invaluable contributing member of 11 other active projects.

Zagorski, who recently retired from PPI member company Blue Diamond Industries, served on the PPI Board of Directors from 2011 to 2017 as vice chair, chair and past chair. During his years as a PPI member, he participated in the Power and Communications Division in various positions: advisory council liaison, chair of notable PCD Task groups, such as the author of the original PPI TR-47 (2011) and PPI TN-48 (2013), and chaired other committees that worked on PCD-2015-07 “Revise ASTM F2160” resulting in ASTM F2160-16, and PCD-2016-04 “Revise Chapter 14 of Handbook of PE Pipe." Zagorski has participated in countless other task groups and was named PCD Member of the Year in 2018.