PPI Announces Projects and Members of the Year

With an unprecedented number of attendees observing, the Plastics Pipe Institute (PPI) honored industry projects and individual PPI members during its annual meeting, held in Naples, Florida, May 6–8. PPI is the major North American trade association representing all segments of the plastic pipe industry.

"Each year we have exceptional submissions for both the projects and the members of the year categories, and this year was no different -- I think this is the first time we had a project in North Pole, Alaska," said PPI President Tony Radoszewski, CAE. "It was especially satisfying to present these awards in front of a packed house of industry peers. I know this made it very gratifying for those receiving the awards."

Radoszewski reported that among the 400-plus attendees, there were 17 new member firms and 68 first-time attendees.

“Evidently, the word has gotten out about the benefits PPI provides to the industry. We have many task groups and committees staffed by member companies who volunteer their time, lending their technical and engineering expertise in the development of many programs including industry regulations and standards," said Radoszewski. "We firmly believe that the number of attendees and submissions will increase for next year’s meeting, which will be held at the Hyatt Regency Maui Resort & Spa in Hawaii, May 4 through May 6, 2020.”

The association’s annual awards program recognizes projects and members for exceptional contributions to the industry. Submissions in the association's divisions are reviewed, evaluated and voted upon by the PPI members 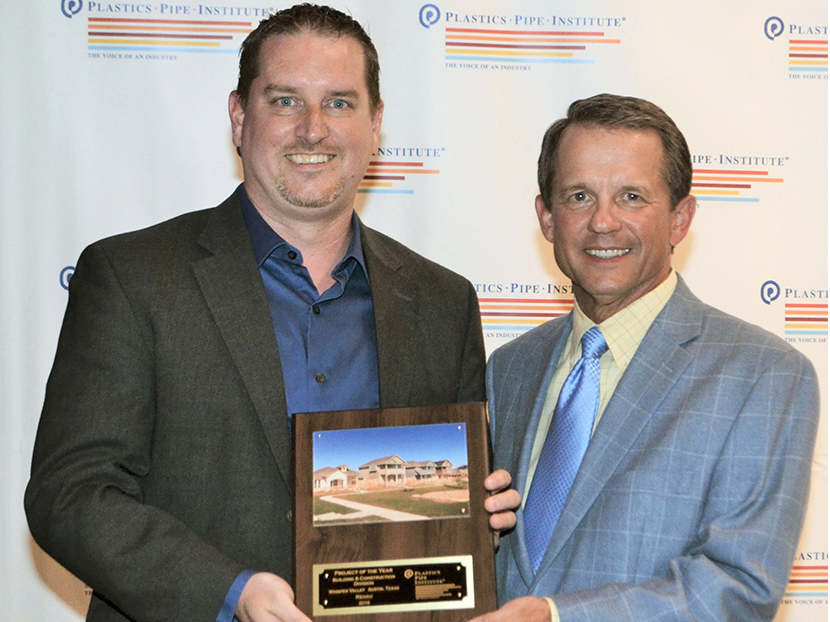 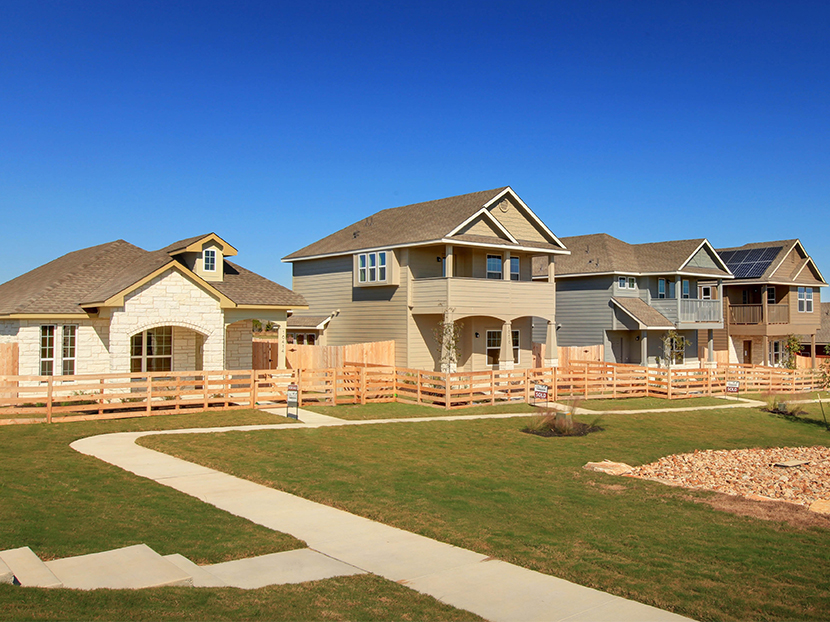 The developer of Whisper Valley in Austin, Texas, mandated that all structures in the entire community be geothermal and solar equipped, capable of achieving the net-zero energy (or carbon neutral) standard adopted by the city of Austin’s Municipal Building Code. With 7,500 homes including apartments, the $2 billion development will be the largest zero‐energy capable housing community in the nation. Each of the 237 homes in Phase I is equipped with a REHAU RAUGEO double U-bend and a ground source heat pump. All builders in Whisper Valley are required to hook up to EcoSmart’s GeoGrid, a 5-mile loop of underground distribution piping that links each home to a geo-exchange network, engineered by REHAU. This geothermal system will reduce heating/cooling energy consumption by up to 65 percent. 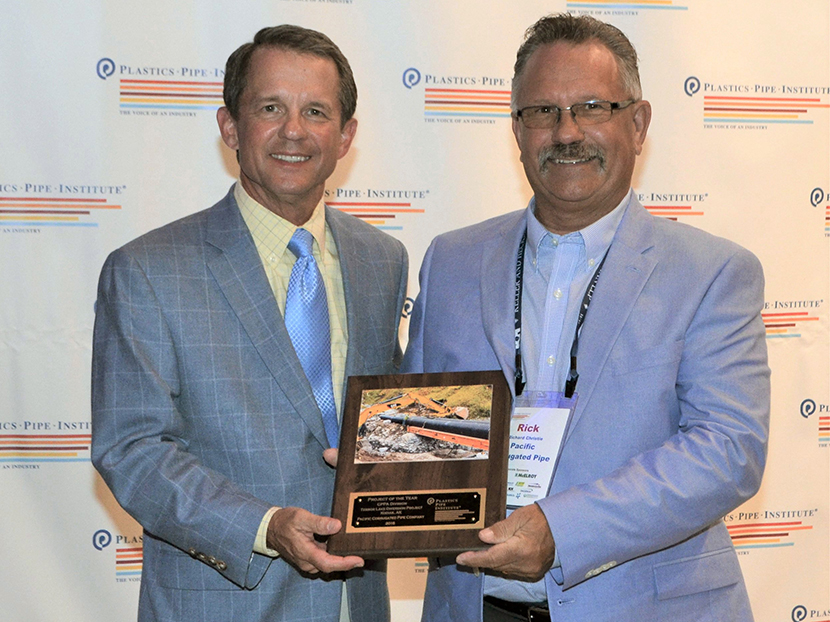 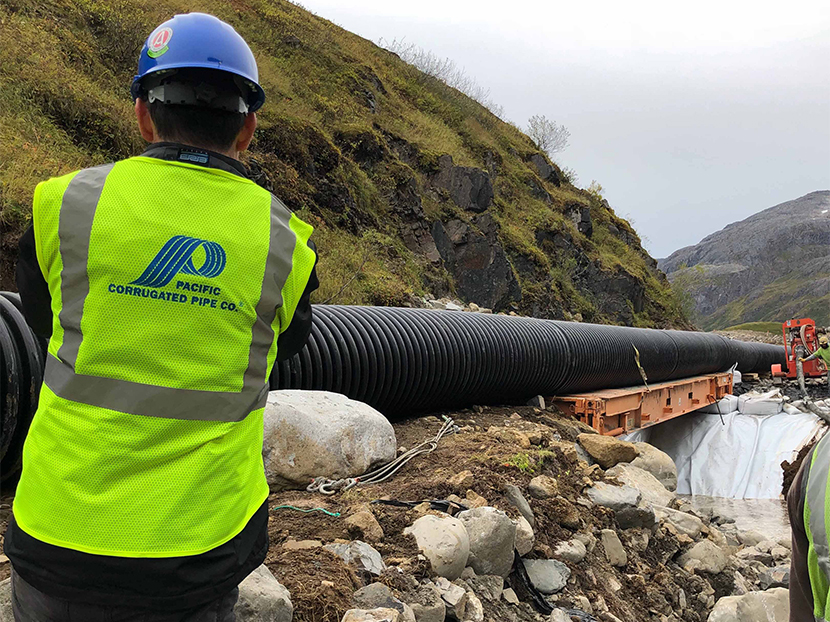 To divert snowmelt runoff from the ocean to a hydropower-generating reservoir at Terror Lake in the Upper Valleys of Kodiak, Alaska, a 1.2-mile tunnel was constructed using Pacific Corrugated’s StormTite high-density polyethylene (HDPE) pipe underneath Kodiak Island’s National Wildlife Refuge. Additionally, the company’s HDPE pipe was used to build cross drain roadway culverts, improving vehicle access to the dam, tunnel locations and Upper Valleys. The Terror Lake Upper Hidden Basin Diversion Project started in 2018 and will take two or three summers to complete. Once the project is finished, the additional water flow will increase the amount of hydropower-generated electricity by an additional 33 million kilowatt-hours per year, which adds about 25 percent more energy capacity to the facility. 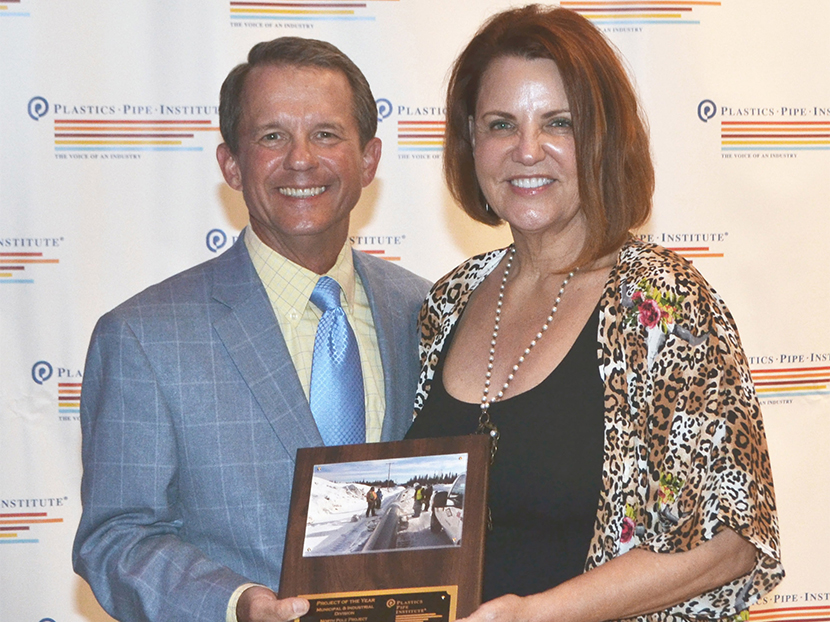 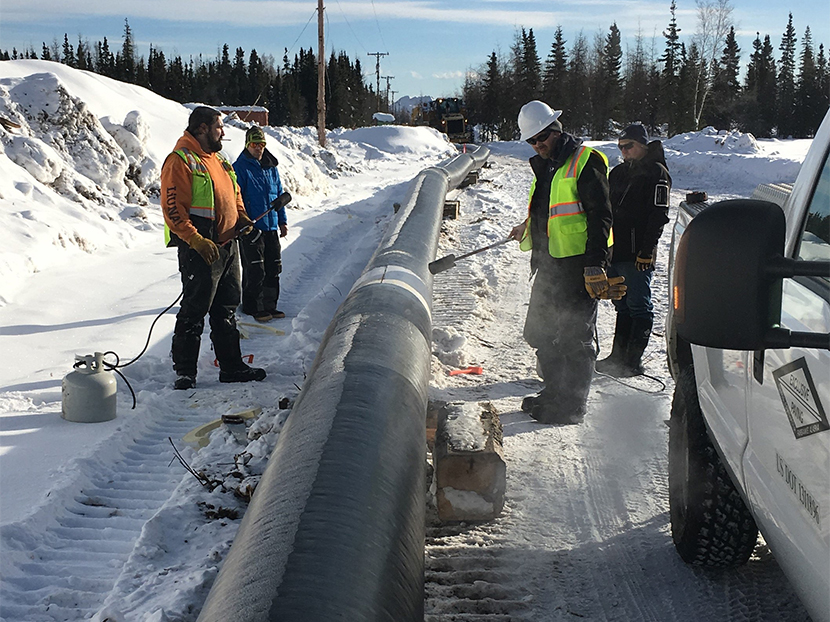 Alaska’s Department of Environmental Conservation discovered Sulfolane and PFAS (Perfluoroalkyl and Polyfluoroalkyls) in and around North Pole, Alaska, a long-term solution for the inhabitants of the city of North Pole, Alaska, was to install a new high-density polyethylene (HDPE) potable water pipeline in sizes of 6, 8,10,12 and 16 inches that were pre-insulated with polyurethane foam to insure uninterrupted source of water during Alaska’s harsh winters. HDPE pipe provided a tough, durable, seismic resistant supply line. In all, the project will consist of 35 miles of pipe, expansion of the North Pole water treatment plant and a 750,000-gallon potable water reservoir. Other companies involved in the project included Wolseley Industrial Group/Ferguson, design engineering firm Stantec and contractor Exclusive Paving of Fairbanks. 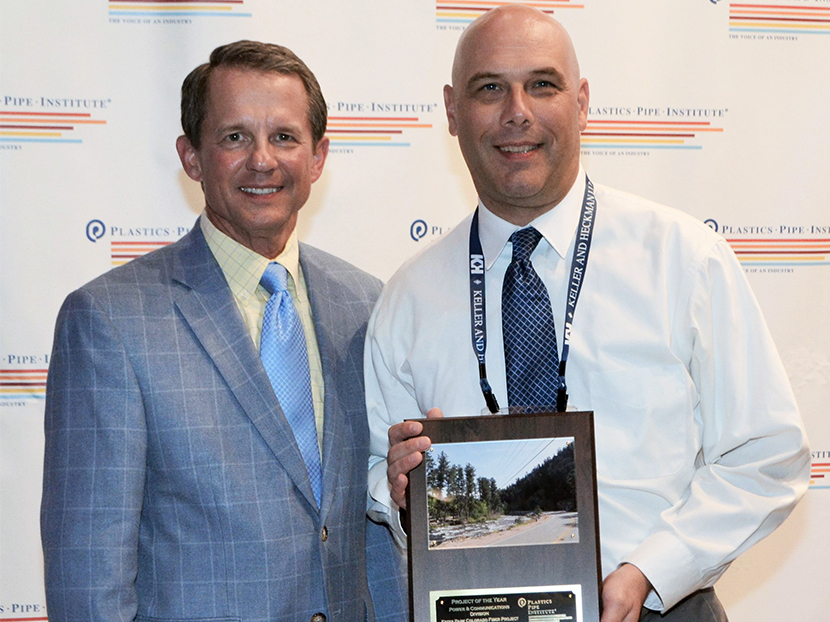 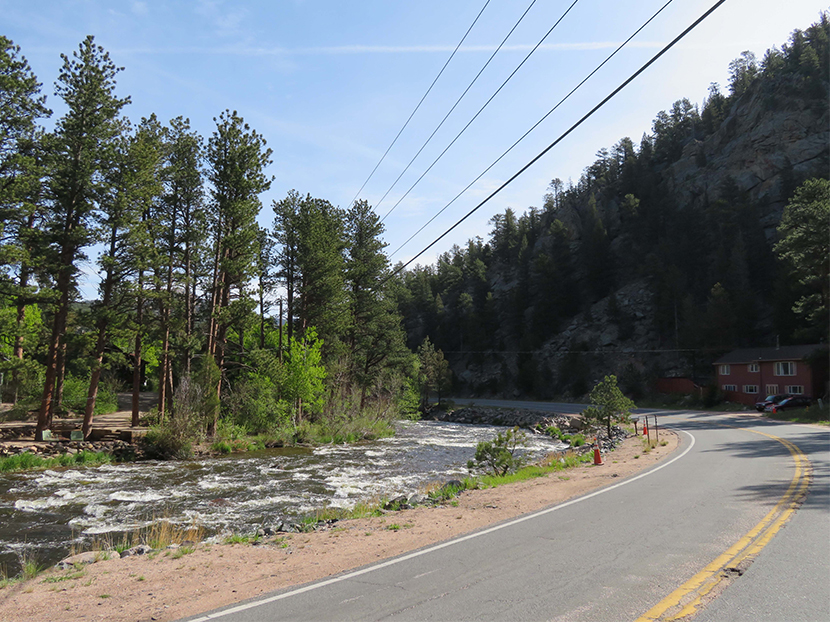 Dura-Line’s FuturePath Figure-8 Aerial Self-Support was used to bring broadband to Estes Park, Colorado, in the middle of the Rocky Mountains with an elevation of 8,000 feet. With all of its poles still being climbed and only 40 percent access to its existing poles, the city of Estes Park Power and Light decided for a fiber installation on the poles. The initial project went up a 7-mile canyon and because of the FuturePath multi-chamber pathway design with a micro cable, they were able to jet fiber the entire route without splicing, which saved  $3.5 million in man hours.

Because of the innovative installation, this project brought high-speed broadband into a community where none of the residents ever thought it would be possible. 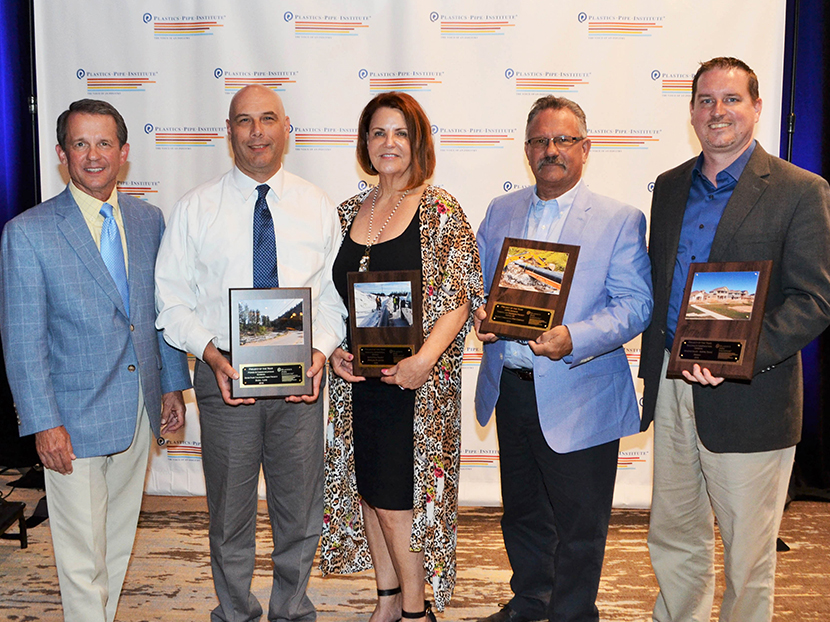 Drainage Division Member of the Year

For more than a decade, Labreque has been an active contributor to PPI and the Drainage Division, offering a perspective from Canada and its providences. He has participated in many technical and marketing groups including being a member of the division’s management committee and PPI’s advisory council.

Johnston has been relentless in his pursuit of standardizing practices and in educating the industry and end users about heat fusion joining of polyethylene pipe. He actively worked to bolster understanding and acceptance through his participation at PPI, ASME, ASTM, AGA, NGA and also by providing support to manufacturers and end users through numerous venues including presentations, workshops, and PPI seminars. He has served as the EPSD management committee advisory council representative and on the PPI Board of Directors. For the Municipal and Industrial Division, he contributed his time and expertise to support the use of HDPE pipe in water and waste water applications as part of the Municipal Advisory Board, AWWA, and at trade shows, and in the development and writing of technical documents.

Power and Communications Division Member of the Year

Zagorski has served as advisory council liaison to the Power and Communication’s Division Management Committee and has been a member of most of the division’s task groups and chair of many, including “Revise ASTM F2160,” “Develop Conduit Design Software,” and “Revise Chapter 14." He was previously the PPI Board of Directors chair from 2013–2015. 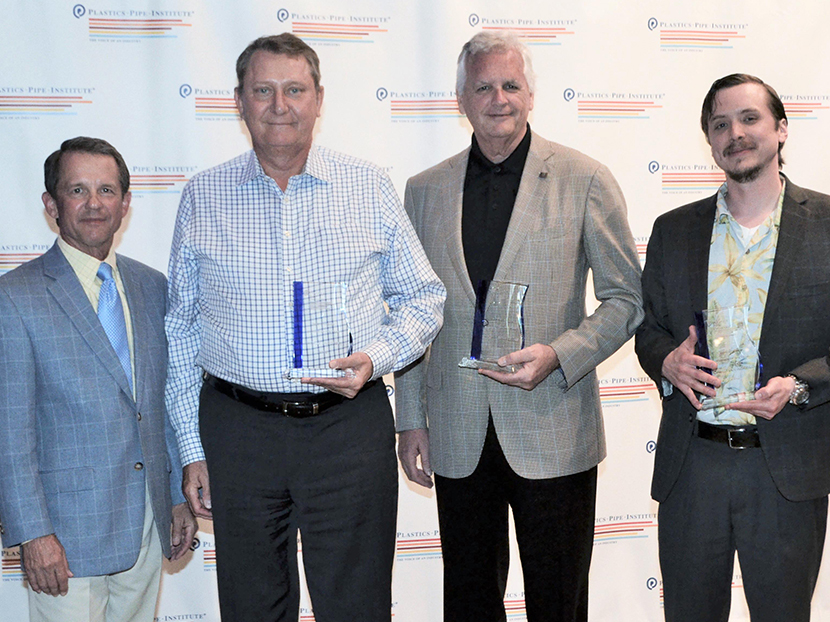 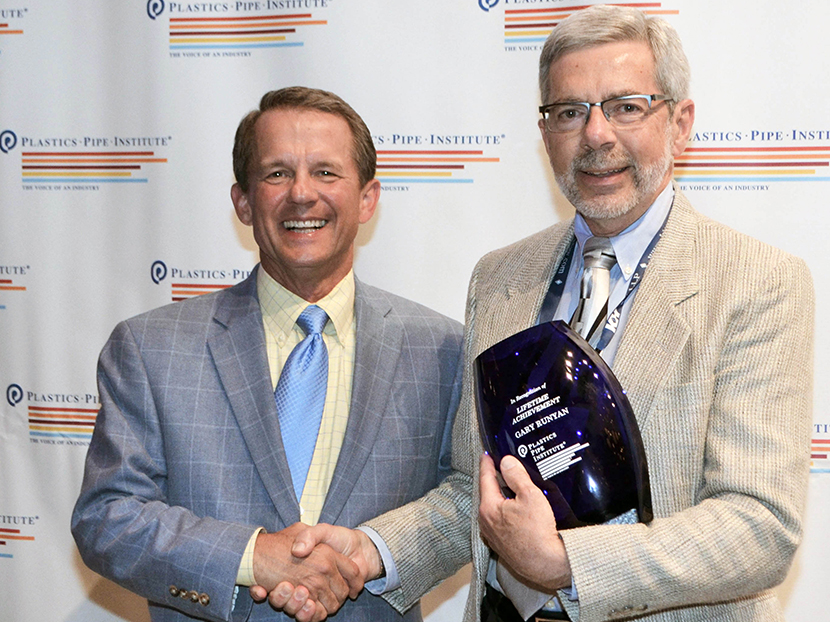 Runyan, who is now retired, was manager, product development engineering, for Zurn PEX Inc., a manufacturer of plumbing products and accessories. His successes during nearly 45 years in the plastic pipe industry include six patents. Runyan’s participation in PPI includes being chairman of the board of directors, chairman of the building and construction division and of the division’s technical committee, plus serving on the Hydrostatic Stress Board, a voluntary industry group of professionals with expertise in thermoplastic materials who work closely to validate performance and define industry-wide procedures.