Getting out of the trenches gave me more time so I could design and build the perfect beast in my home.

I've dreamt about it, planned for it, designed for it, changed it a million times, and was never quite sure it would happen. And now it is and I'm like an apprentice staring at a wall full of tools in a brick-and-mortar supply house — drooling and thinking of all the things I need and want.

Every house I've ever owned had forced air and I was always working so much I didn't have time to change it over. At the top of my bucket list was having my own hot water heating system, designed exactly how I wanted it, using all my favorite products, and all the bells and whistles I could think of — and there were lots of them.

It all just fell together — as things tend to do when you focus on doing the next right thing. Getting out of the trenches was vital because it gave me more time. Along with the consulting business came requests for training from my clients, and PowerPoints bore me, so the next step was obvious. I was going to build the perfect beast. I still like to get my hands dirty and banging my knuckles never bothered me. 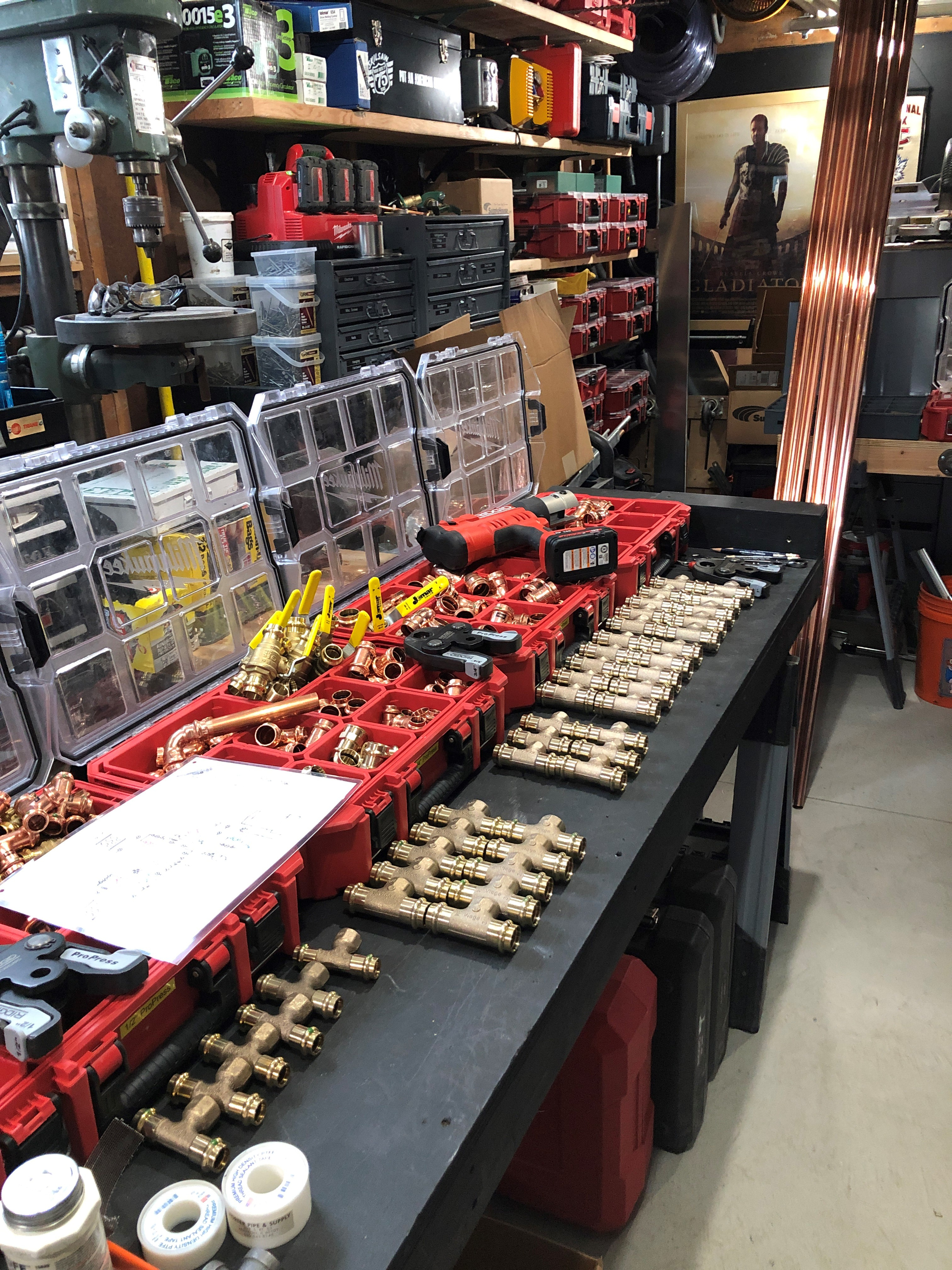 There won't be much design information here. I did my due diligence and sized the boiler correctly, pipe sizing, pump selection, all that stuff. I drew the piping schematic for this project at least 10 times, and not because I was making mistakes. I just kept coming up with new ideas and making changes.

Looking for a Knight

Based on the somewhat final piping diagram, I put together an equipment and material list. For me, that always begins with the boiler. There are plenty of excellent modulating-condensing boilers on the market, but I've been partial to one for a long time — the Lochinvar Knight fire-tube boiler (see Figure 2). In fact, it's the only mod-con I've installed in the last eight years. Here's why I chose this one for my house and my hydronic training system. 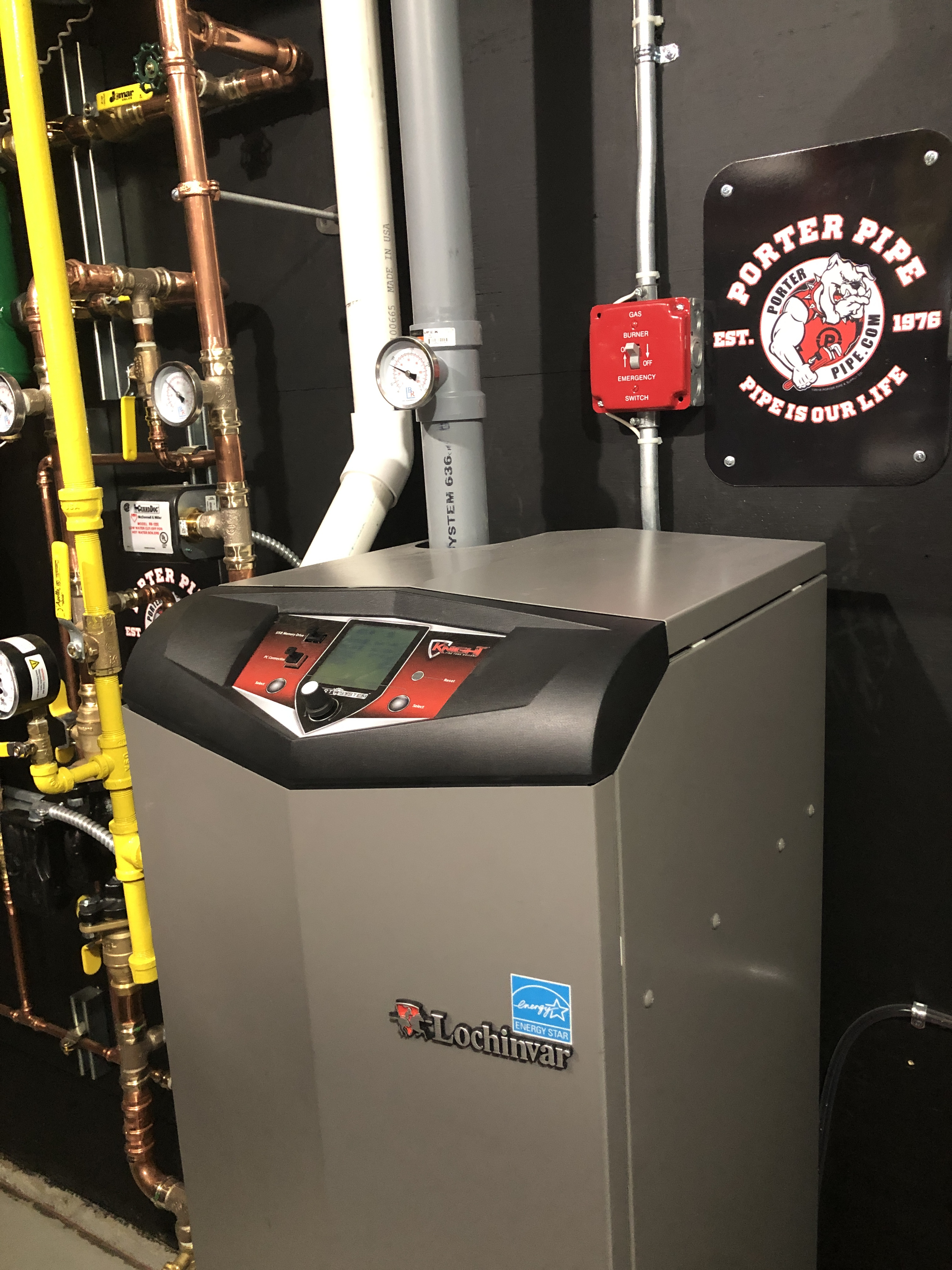 Lochinvar has a robust presence in the Chicago area. That's very important when selecting equipment. Lochinvar has an office/warehouse less than a mile from my home, operated by Rick Butler and Bob Butler, two great guys who have always been there for me.

And working along with them is Porter Pipe and Supply. Talk about a strong presence — these guys are the heavyweight champions of PVF and hydronics supply houses in metro Chicago. Seriously, their customer service is so forward-thinking that you can walk in there any day of the week, get a free newspaper, free donuts and rolls, free tradesmen pencils, a fill rate always near or at 100 percent, and get this — a new drive-through service. I'm not kidding you.

Presence is important, but there's more to it than that.

Back to service: If there is a problem — and there will be one on some job, somewhere, at some time — you want to make sure your customer is taken care of. The first line of protection is the contractors. They are the ones who first get the call and solve the problem by themselves, most times. But parts fail and for that, you rely on your supply house — which, in turn, relies on the manufacturer's representative or the manufacturer itself.

There's no such thing as waiting a day or two for a boiler part in the middle of a Chicago winter. Every time I needed something for a Lochinvar boiler, both Porter Pipe and Lochinvar met that need. And the times when things got a little bit complicated, they both went way above and beyond to uncomplicate things. It was my method of operation as a contractor, so for those companies to have my back with the same mindset made my life so much easier. For that, I am grateful.

What about reliability and functionality?

As a contractor, my days were long, very long. While on the job, I did my damn best to make sure I did everything the right way. Nobody wants to get a callback on the night of installation — or a week or month down the road, either. And you certainly didn't want to get a call for an equipment problem. We all have to get up the next morning and do it all over again, so working the night before on any kind of warranty issue is terrible in every way imaginable.

In these past eight years of installing Lochinvar mod-cons, I had one call the night of the installation. Truth be told, I shouldn't have gone out there that night. I repeatedly told the homeowner from day one that his gas meter and gas line were not big enough to handle the 500,000 BTU boiler used for the new snow- and ice-melt system. He wouldn't listen to me, though.

I told him I'd get dressed and head over as long he got the gas company there at the same time. We met there at 2 a.m. and, sure enough, the gas man told him the same thing I'd been telling him. I felt as if I did the right thing, but I also told him this was his one and only Mulligan.

No other problems. None. Zip. Nada. That was it, other than annual maintenance, which I insisted on.

Functionality is where Lochinvar rises above the crowd. Its control system is where the manufacturer shines (see Figure 3). It's easy to navigate and attractive, if aesthetics means anything to you. Here are some of my favorite features: 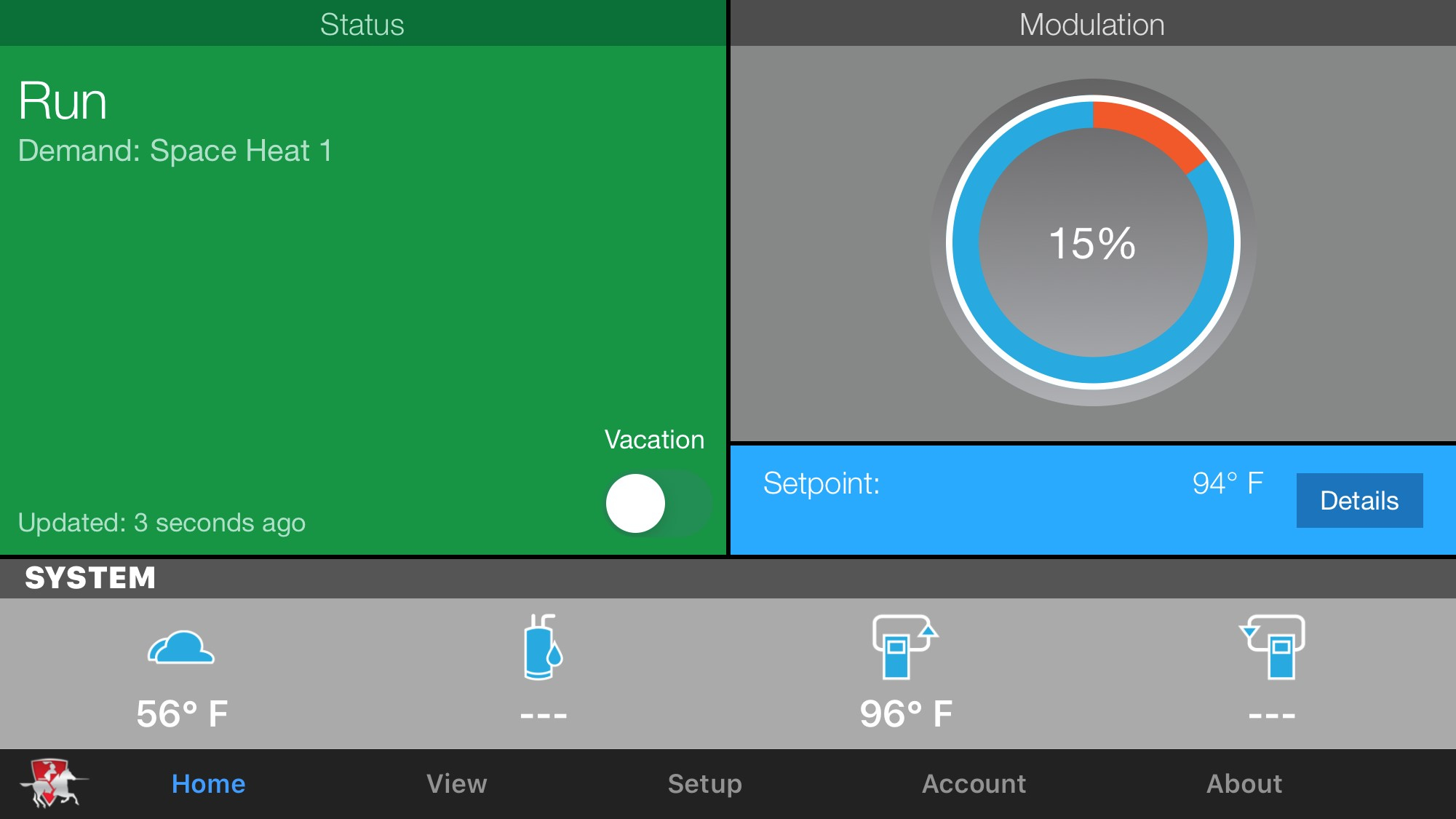 One more thing about Lochinvar and then I'll move on. I've been down to its facilities in Tennessee for training, VIP Showcase, factory tour, and included in this were discussions. They involved 20 or so contractors and management people, and six to seven engineers.

Lochinvar management wanted to know what we thought of the Knight as contractors and if we had any suggestions on how to improve or what should be changed. That, in and of itself, is not too unusual. What is unusual is management listened, and the engineers were taking notes. And then they acted on our suggestions. I was genuinely and pleasantly surprised; I'd never experienced that before. It was truly a game-changer for me.

Alright, enough about the boiler. I want to get back to my system. Again, I could have chosen any product I wanted and could have piped it a thousand different ways. But here is what I actually did (see Figure 4). It will always be a work in progress, and it's my favorite toy. 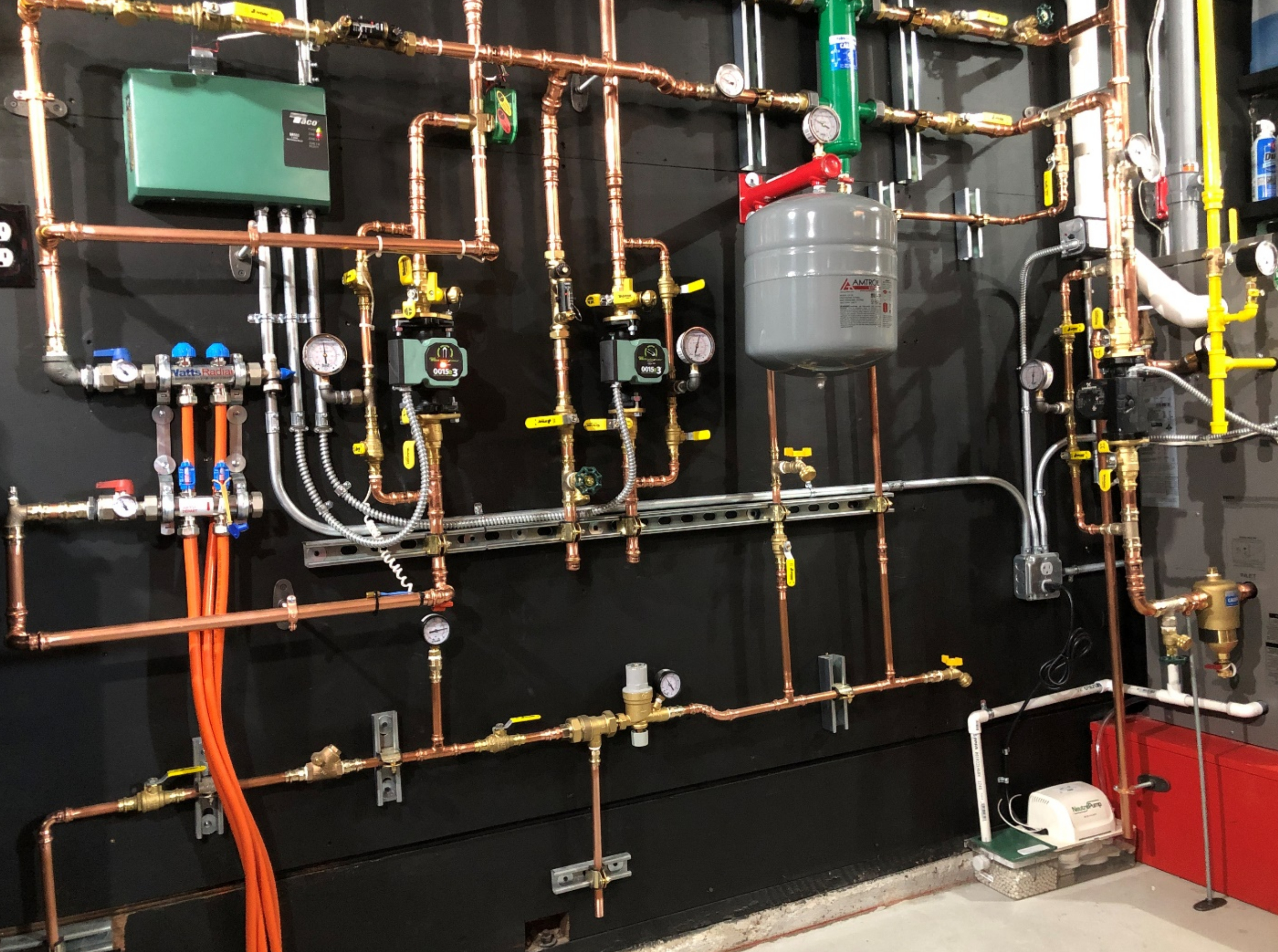 Some unusual things are going on here, aren't there? I'll start with the obvious. Each Taco 0015 system circulator has a 1/2-inch loop piped in parallel using two ball valves on each side of a pressure gauge. I did the same for the boiler circulator. This setup allows me to see the actual head added to the fluid by the circulator, not some theoretical number.

Cool, right? Not my idea, by the way. I got it from John Siegenthaler's third edition of "Modern Hydronic Heating."

Here's how you do it: With the circ running, close one ball valve at a time and record the respective pressures in psi. Now plug them into this simple formula:

Now, you're not likely to see this in the real world. Possibly on commercial pumps where there are pressure ports on each side of the pump. I went with one gauge to decrease the margin of error for training purposes and to satisfy the heating geek in me.

If you look closely, I not only have flow meters on the radiant manifold, but I also added Caleffi Quick Setter balancing valves with flow meters on each zone return. They make sense on almost any system and they'll act as one more visual aid for training videos.

My favorite pressure gauge is right above the expansion tank (see Figure 5). You know the whole thing about pumping away from the point of no pressure change? Well, it's real and it's essential to understand. Being able to see it drives the point home. 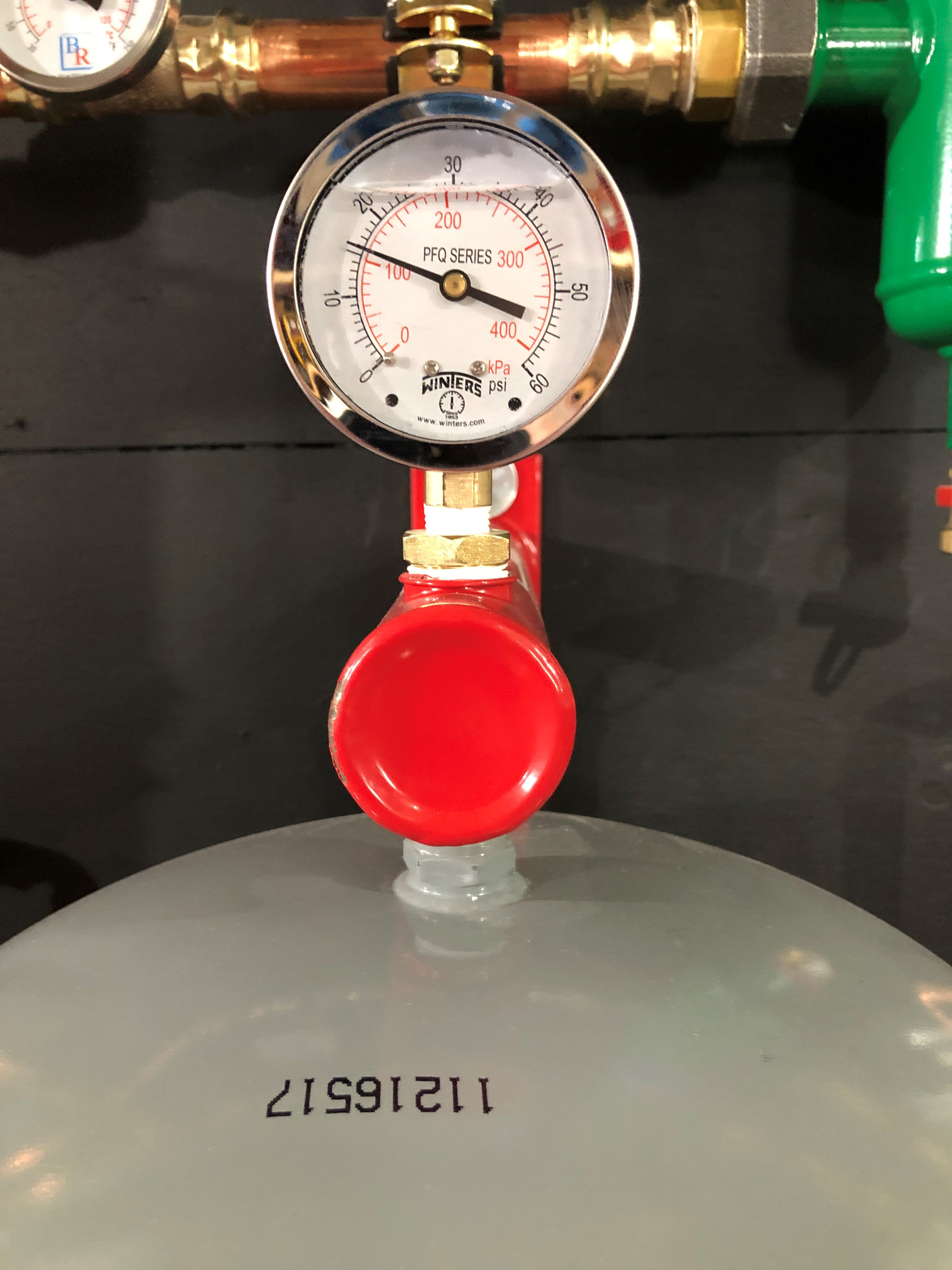 This is the only water pressure gauge on the system, which remains completely unaffected when the pumps bang on. The dial just does not move. Gil Carlson was a really bright guy, and so is Dan Holohan for making it easier for us to wrap our heads around this concept.

Here are a few more things I did either because they were necessary or I just because I could:

At some point, I'll also add radiant ceilings, radiant walls and a towel warmer for my wife. Maybe a second boiler, too.

Why not? Some guys buy snowmobiles, Harleys and 120-inch flat-screen TVs.

Not me. I'm a heating geek.