Sunny Orlando did not disappoint for the 2020 AHR Expo. How could it with the Super Bowl setting the stage on Sunday just up the road in Miami? AHR Expo officials report that more than 50,000 people attended the annual heating, cooling and refrigeration trade show; more than 11,000 of those attendees were first-time visitors, and more than 6,600 were international visitors. More specifically, there were 8,443 contractors and dealers, and 3,617 engineering, design and construction professionals.

Six of your PHCPPros community members — representing Plumbing Engineer, PHC News, The Wholesaler, Especificar — were on hand to cover the annual event. From presentations on new technology to design trends such as a focus on time savings due to labor shortages, we took it all in.

This year you will see us roll out our findings in a variety of ways. But this month, we are recapping the snapshots of products and services we saw on the show floor.

On Feb. 3, the PHCPPros team kicked off the expo at the annual Taco Comfort Solutions press conference, where there were special celebrations of the company’s 100 years in business. John Hazen White Jr., executive chairman and CEO of the Taco family of companies, also presented John Barba, director of training for Taco Comfort Solutions, with the Dan Holohan Lifetime Contribution to Comfort Award at the press conference.

Next up was the Aquatherm booth, featuring some of its 2019 launches, such as its addition of molded fittings in 45s, 90s and tees for its SDR 9, 11 and 17.6 product lines. At the RectorSeal booth, the tour centered on its Pro-Fit Quick Connection and ductless mini-split accessories.

Over at A. O. Smith, the question of never worrying about hard water again was posed. The company’s new X3 technology is the answer to that question, as it prevents scale buildup and offers three times longer life for tankless water heaters. Rounding out the afternoon was the Noritz booth, which highlighted their warranties: the EZ Series has a 25-year warranty, the NRCR has a 15-year warranty, and the NCC199CDV has a 10-year warranty. The NRCR was a new product spotlighted at the booth; it offers faster hot water delivery with recirculation.

Day one ended with the Armstrong Fluid Technology media briefing, where the company expounded on the success of its Active Performance Management for devices, systems and cloud technology. Officials also spoke to exceeding the new Department of Energy pump regulations and launching its booster manager cloud service in 2020. 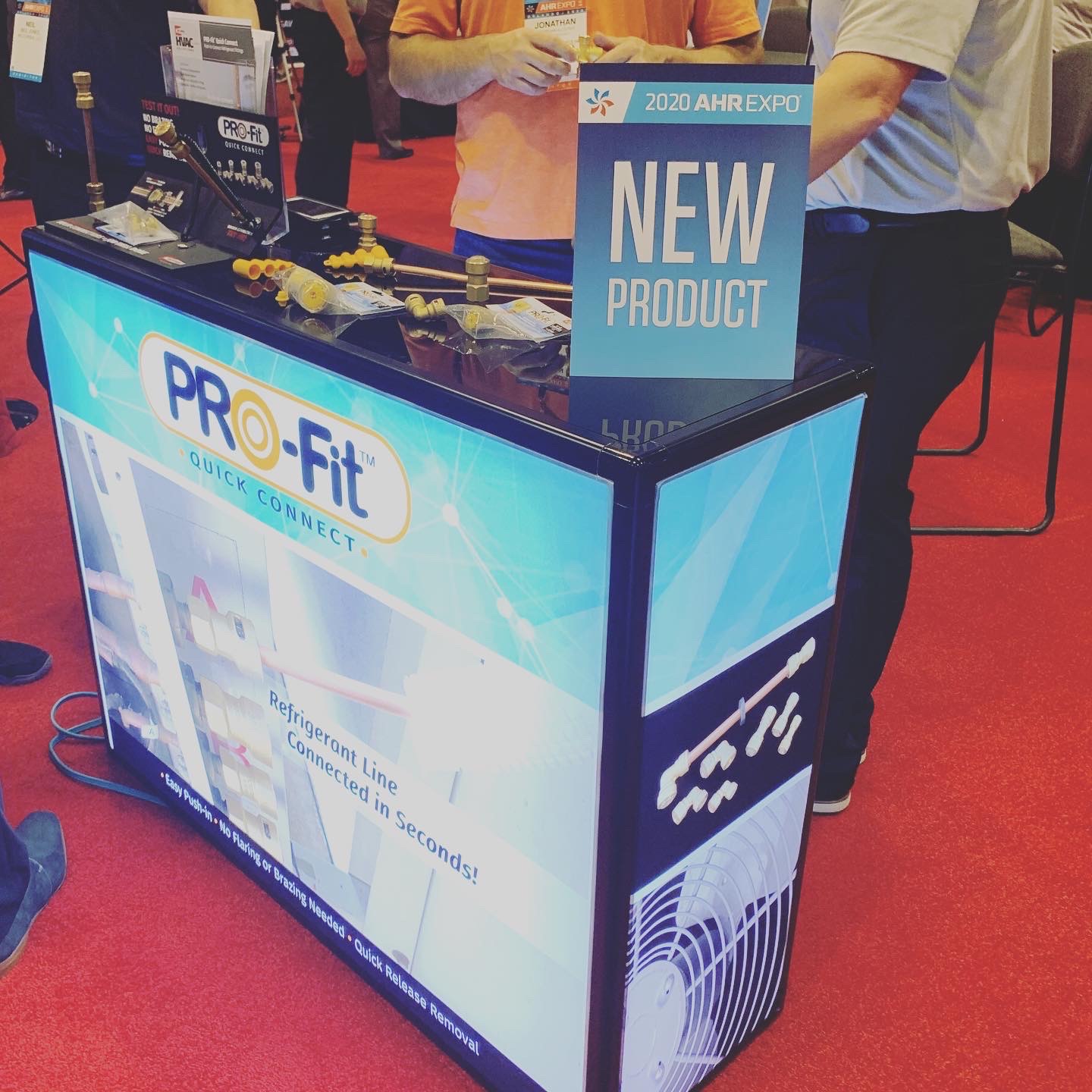 A tour of the Uponor booth on Feb. 4 marked the start of day two for the PHCPPros team. Uponor showcased the newest addition to its Phyn line, Phyn XLs, which is for light commercial applications. The latest offering monitors and finds leaks and also offers time-saving solutions. The company also highlighted the soft launch of its commercial professional consulting group, formerly known as design services.

Falcon Stainless was excited about bringing its “Go Big Red!” campaign to life on the show floor. In 2020, the company launched its new CSS hose. Keeping the energy going, the next booth tour at Delta Controls had a variety of new products to spotlight. Its O3 Sensor Hub 2.0 was the winner of an AHR Expo Innovation Award in the Building Automation category. Next up was a newer exhibitor to AHR, Poloplast. The company detailed how its mechanical pipe improves speed and cost on jobsites compared to welded steel.

After lunch, it was off to the Bell & Gossett and Xylem booth, which centered on the theme of solving building problems. There were nine case studies showcased as the beginning of a series that will give PHCP professionals access to projects they are featured to support more effective design. From engineers to reps, the company is all in on impacting design. To encourage social responsibility on projects, the company also launched a 20-in-2020 challenge for reps.

Next up was the Fujitsu booth, which detailed a new zoning system and air handler coming in 2020. Aquamotion spotlighted new offerings as well, including its Aqua-Shield outdoor hot water recirculation pump for dedicated return line tankless heaters. Over at the NTI Boilers booth, the new TRX was on display, featuring updates to the heat exchangers to improve maintenance and cleaning. It also revealed the new FTX, which will be available later in 2020 with a different heat exchanger.

Heading over to the Navien booth, there were a variety of new introductions. The Navien Premium non-condensing tankless (NPN) water heater series was featured. It is available in two models and six sizes: NPN-U (universal) and NPN-E (exterior). The Navien NCB-H (high output) series of condensing combi-boilers includes industry-leading BTU output on DHW, 15:1 turndown ratio, and a more dynamic BTU lineup with added models. The Navien NPE-2 series features a turndown ratio up to 15:1, an upgraded advanced multi-line control panel in English for easy setup, and an increased 2-inch PVC venting length.

Rounding out the afternoon was a booth tour with Apollo Valves focusing on its new ShurJoint M07 quick-install coupling. The push-in coupling offers time savings by improving the speed of installations. It was also exciting to see the launch of Viega’s very own branded tools, like its Pressgun, at its booth. At the Easyflex booth, the focus was the new Vectorflex CSST gas line featuring a semi-push fitting for time savings. And Sanden had exciting news from the expo floor as it launched the new ECO2 brand. It now owns, services and sells all Sanden products.

We closed out day two at the NIBCO press event. The event centered on a special demonstration of the new 585 high-performance ball valve and details on its release after extensive voice-of-the-customer research. The event closed with a teaser for a new product coming later in 2020 that will use laser welding technology. 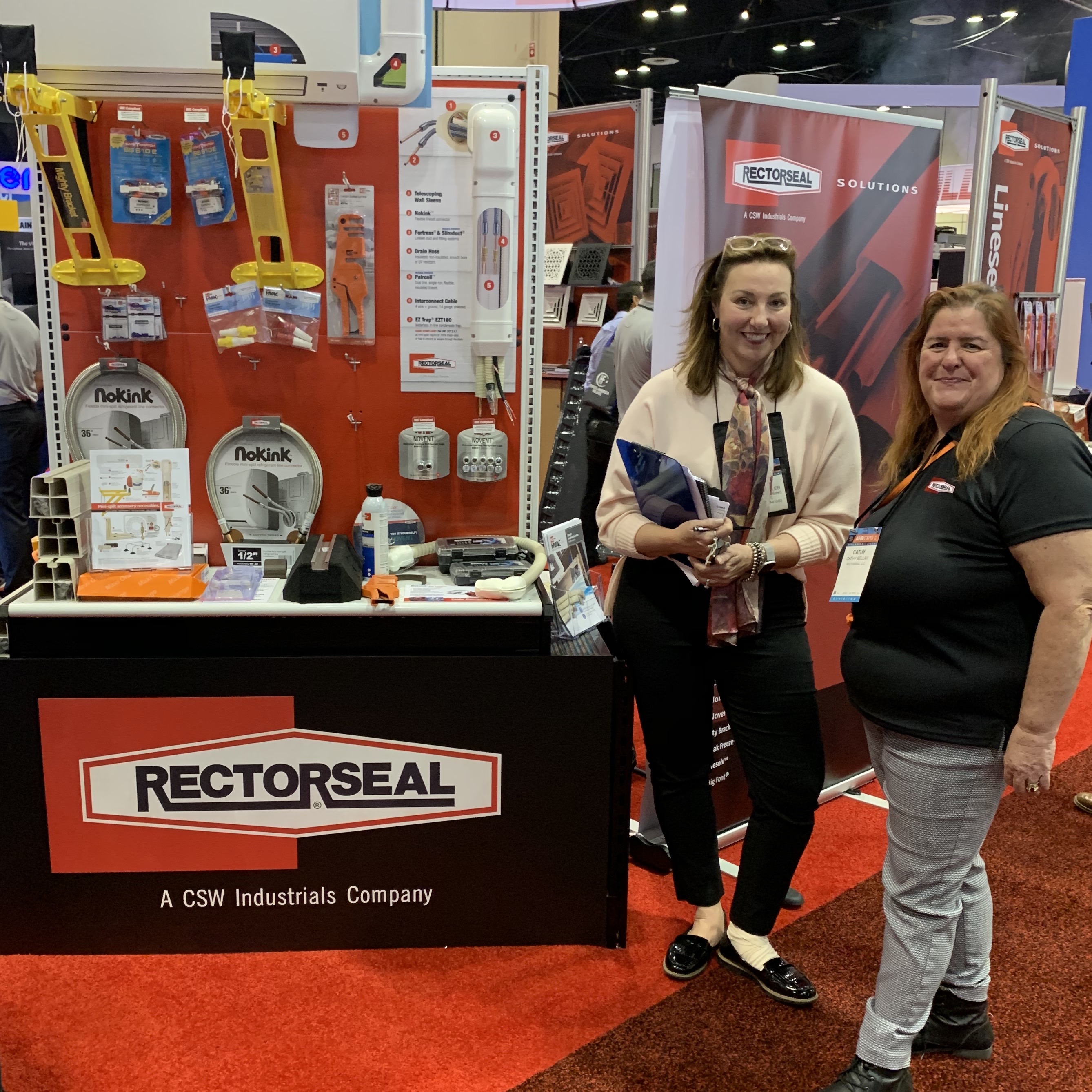 The final day of the show, Feb. 5, started with checking what the Bradford White Corp. portfolio had to offer. Starting with Niles Steel Tank, the PHCPPros team learned of its new “Alloy Works” facility for stainless-steel custom tanks. Next, Laars showcased its new commercial electric boiler for electrification projects that aims for carbon-neutral and net-zero status. Finally, we checked out the Bradford White TTW Power Vent.

Continuing on the portfolio path, PHCPPros explored what the Watts brands were showcasing. A true display of the Internet of Things, Watts, PVI and AERCO spread their message of “Connect. Control. Conserve.” Specifically, PVI highlighted its strengths in reliable storage water heating; AERCO focused on its HVAC, mechanical and tankless domestic water heating offerings; and Watts spotlighted its flood protection and alert systems, as well as tekmar control and communication capabilities.

After lunch, it was off to Lochinvar, where the trend of clear monitors on boilers could be seen on its Knight XL boilers. Over at EZ-FLO, the focus was its new offering, STREAM, a highly engineered valve that compresses air in water meters, allowing users to save up to 25 percent on water bills. At the Red-White Valve Corp. booth, it introduced a new line of PEX transition valves. And at Triangle Tube, it did a full introduction of its recently launched Instinct offerings for residential and light commercial.

The end of the last day of the expo was spent with Reliance Worldwide Corp., checking out its StreamLab, which lets users turn off water from their phones. Then it was over to the Eemax booth to learn about its recently launched ProSeries XTP with new technology that makes it ideal for commercial wash down areas.

We look forward to another great expo in our hometown of Chicago for AHR 2021!