The horrific fire at Notre-Dame cathedral in Paris in April tells a story of heroic actions by firefighters that prevented even greater damage and avoided loss of life. It also reveals vital lessons for those of us involved in engineering fire protection.

Some of those lessons relate to the risk-benefit analysis that any historic facility open to the public has to make about how best to preserve its authenticity as well as its history. Others relate to all facilities and their fire protection strategies.

Central to the challenge that Notre-Dame faced was the desire not to compromise the stunning architecture that has inspired the world for centuries. As engineers who have worked on some of the most iconic buildings in New York City and many religious institutions, we understand the crucial importance of such historic landmarks and the need to preserve their aesthetics while ensuring their contemporary function. But that challenge was only part of the story. The lessons are much broader and reveal insights that can enhance fire protection around the world.

In a brilliant analytical tribute to the responding firefighters – titled “Notre-Dame came far closer to collapsing than people knew. This is how it was saved.” – The New York Times reported that “The security employee monitoring the smoke alarm panel at Notre-Dame cathedral was just three days on the job when the red warning light flashed on the evening of April 15: ‘Feu.’ Fire.”

The first lesson starts there. No matter how talented and well-qualified any employee may be, the initial break-in period is crucial, especially with a fire-detection system as complex as the one at Notre-Dame. That system did not notify the Paris fire department; instead it alerted the employee who contacted a guard, who went to the wrong location to look for the fire. It’s still unclear how that error occurred, but nearly 30 crucial minutes elapsed before they realized the mistake.

It did not help that, according to the The New York Times, the employee “was supposed to have been relieved after working an eight-hour shift. His replacement was absent, so he was on the second leg of a double shift.”

This brings up the issue of human reliability. The detection system in place is useless, if alarms cannot be correctly interpreted and addressed.

A second lesson can be found in the matter of who was notified by the fire detection system. At Notre-Dame, the guard who was sent to look for the fire had to climb steep stairs to the attic – reportedly a six-minute exercise for a fit person – so there was a built-in delay even in the best of circumstances. When he went to the wrong location, the delay only grew.

How quickly one can determine whether an alarm represents a real fire or a false alarm is vital. Even once the Notre-Dame fire was reported to the fire department, firefighters still had to travel to the scene and climb to the attic with hundreds of pounds of hoses and equipment to start battling the blaze.

In retrospect, with a structure of the national and global importance of Notre-Dame and the built-in complexities and dangers, the fire detection system should have shortened the time needed to notify the fire department.

It should also have been clearer. The New York Times calls the fire warning system at Notre-Dame “so arcane that when it was called upon to do the one thing that mattered — warn ‘fire!’ and say where — it produced instead a nearly indecipherable message.”

The fire safety system at Notre-Dame prioritized prevention and detection and was based on a key assumption: that if a fire occurred in the attic, its ancient oak timbers would burn slowly, leaving sufficient time to combat the flames. The rapid spread of the fire was, therefore, not anticipated, but it was aided in turn by the nearly 30-minute delay in detection – an enormous head-start for any fire – and the fact that there were no sprinklers or firewalls in the attic.

It’s that combination of circumstances that proved so destructive. One can argue about the wisdom of any individual assumption, but the key assumptions in any fire safety system must be considered together – and in context. A plan based on detection should recognize the danger of a nearly 30-minute built-in delay in combating a fire, especially where there are no sprinklers or firewalls.

The fact that the wooden attic at Notre-Dame cathedral did not have a sprinkler system or firewalls seems surprising, but each historic facility must decide the specific mix of risk and historic preservation that it is willing to tolerate. For every technological improvement, there is a trade-off in appearance, and sometimes technology has its own risks – of a burst waterpipe in a sprinkler system, for instance.

The balance between risk of fire and preservation of historic aesthetics is a nuanced one. Each institution must make that decision, based on its own priorities.

In our work with historic houses of worship, we typically recommend placing a sprinkler system in the attic – sometimes a dry pipe sprinkler system – and have designed suitable systems for such settings. This provides a means of fire suppression, especially critical for structures built of combustible material.

Our clients have typically not installed sprinklers in main sanctuaries, where the aesthetics would be adversely affected. There are, however, other strategies to save lives in sanctuaries such as early detection, automatic smoke control exhaust systems, and more passive solutions such as fire-rated separations and fireproofing of structural elements.

Similarly, in engineering Grand Central Terminal, whose Main Concourse is an unrivaled civic sanctuary, we designed sprinkler systems for all spaces except the Main Concourse. A sprinkler system in that glorious room would not only compromise the aesthetics of the ceiling, but, because of its height, standard sprinkler water delivery would be ineffective. Instead, we focused on automatic smoke control – to protect occupants, first and foremost. 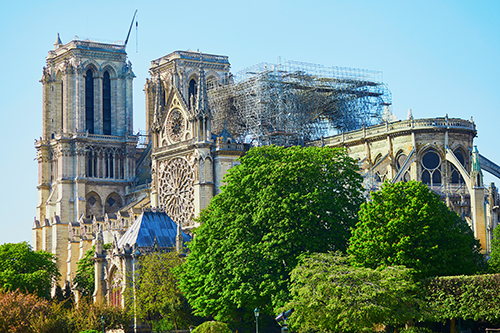 As plans to rebuild Notre-Dame emerge, they will inevitably involve incorporating 21st-century technology. Clearly the use of cutting-edge fire detection systems will be important.

Another technological advance that has been improved over several decades is CFD (computational fluid dynamics) fire-modeling simulations, which likely will be used in rebuilding Notre-Dame. They allow the engineers to project various site-specific fire scenarios, thereby enabling all stakeholders, including fire departments, to compare fire behavior and protection system performance under different conditions.

We used computer-based fire-modeling to design the life safety system for Audible’s new “Innovation Cathedral” in a formerly abandoned, historic church in downtown Newark, NJ. It enabled a dual-atrium design that incorporated both the 55-foot height of the former nave and the 35-foot height of an adjacent community hall.

While Notre-Dame’s nave is twice that height at 115 feet, the computer-modeling is just as applicable – and to the attic as well. It may be even more vital for Notre-Dame, given the fire-fighting challenges inherent in such a vast structure – and the complexities now so well-known.

In any property, it’s essential to check standpipes regularly to ensure that they will work in an emergency. New York City requires dry standpipe systems to be monitored by pressurizing them with air.

The issue of reliability of standpipe systems brings back memories of the 2007 Deutsche Bank building fire in New York City – opposite Ground Zero in Lower Manhattan. The fire resulted in the tragic deaths of two firefighters and led to subsequent criminal charges.

The standpipe system had been disconnected for demolition work, leaving the building completely unprotected. New York City has since updated its temporary fire protection requirements during construction as a result.

Double-checking after an alarm

Again, the importance of training and of understanding the context in which the fire safety system operates is vital.

Recognizing that no lives were lost

In the midst of the national – even global – tragedy of the Notre-Dame fire, it should always be remembered that no lives were lost.  Protecting life safety is almost always the top priority of any fire safety system.

At the same time, firefighters were forced to risk their lives. Fortunately, none perished, but that danger could have been avoided by a better fire safety strategy.

The heroism of those firefighters, who ran into the blaze to save the cathedral, now inspires us just as the architecture and engineering of Notre-Dame have for centuries. Perhaps that’s the greatest lesson of all – that inspiration comes from not only the natural and built environment around us but from how we respond when our own capabilities are put to the test.