Try not to flinch at the following numbers about waste. According to the most recent American Society of Civil Engineers (ASCE) Infrastructure Report Card, Americans generated approximately 258 million tons of trash in 2014 — about 4.4 pounds of solid waste per person per day.

I will be honest; I flinched. This is usually the part where I say, yeah, well, it is what it is. I’m an editor of a trade magazine. For example, construction provides me with interesting people, processes and products to write about. Despite myself, I still ask the age-old questions. What can I possibly do, as one person, to influence unsustainable ideals around building that are deeply engrained in our industrial, societal, etc. fabric?

Alex Eaves is one person doing just that. He’s the owner of STAY VOCAL, a reuse apparel brand that rescues shirts and gives them a second life with a new design.

After working with his brand, Eaves became passionate about the reuse message, participating in speaking engagements, then travelling the country and filming people who have reused in different ways. In 2015, he released the documentary, “REUSE! Because You Can't Recycle The Planet.” The film has been viewed in over 20 countries and has been nominated for multiple film festivals.

Now, Eaves is travelling and spreading this film around the country again, but this time, not in his Pontiac Vibe. He was looking for something a little “bigger.” He and his business partner, Derek “Deek” Diedricksen, tiny house builder and enthusiast who has hosted/designed for TV shows on HGTV, put together something called the REUSE! Box Truck Tiny House, a repurposed U-Haul truck. Eaves and Diedricksen transformed the box truck into a mobile reuse education center and living space.

Like the REUSE! shirts, this truck will serve its second life helping people see the impact they can make reusing and reducing waste in their own lives.

Tiny houses make the world feel, well, tiny. I first came across Eaves and his truck at the Greenbuild Expo and Conference held in Boston this year. Eaves had connected with someone on the board of Greenbuild who attended the same tiny house festival, who thought the venue would be a perfect space for Eaves to showcase and share his work with earth-conscious optimists. Eaves emphasizes how important it was for him to be included in the space, since his message is more about reusing products versus creating new ones albeit green ones.

It Started With a T-shirt

Eaves’ STAY VOCAL apparel line is made with both new t-shirts that were going to be destroyed, as well as pre-worn shirts that have been washed and treated. If you visit STAY VOCAL’s website you will also find another fun fact that you should try not to flinch at (I did, again): each t-shirt helps save 400 gallons of water, which is how much water it takes to grow the cotton for one shirt.

Eaves has an insider perspective of how a single t-shirt can have an impact on waste. During his earlier days, Eaves toured with large bands and witnessed the merchandising process firsthand.

“I was faced with the fact that there is massive amounts of production and destruction of t-shirts that people don’t know about. If a band breaks up or a company goes out of business, a lot of times, those shirts are shredded or burnt,” Eaves explains.

Waste is a touchy subject, especially when it addresses the interests and traditions we hold close, like our music and sports. “Look at the Super Bowl on the horizon,” Eaves says. “They make all the championship merchandise for both teams, and the losing team’s merchandise is either destroyed or sent to a third world country. Why are we using all this time, money and resources? Why can’t we wait a few minutes?”

“I was really excited to be a part of Greenbuild. It was fun to be the ‘punk-rock’ kid at the adult party,” Eaves laughs. “You are at the table with all these well-known corporations, and you pull up in this grungy, white box truck with a bunch of t-shirts,” Eaves laughs.

Along with forming some new connections and customers and gaining tiny house workshop opportunities at Greenbuild, the REUSE! team was able to build awareness. “We opened a lot of eyes. It was our main goal to inspire people to save time, resources and money,” Eaves says.

The REUSE! team officially launched the box truck tiny house project through Fortua, a community-inspired crowdfunding campaign, in July 2016, acquired the truck in October, and started building in November. They transformed the inside of the truck, using upcycled and repurposed materials. It wasn’t too hard for the team to come across these materials. Fortua makes it easy for people to donate funds, but also encourages community members to contribute time and materials. This is how the REUSE! team acquired materials like reclaimed wood from a local museum and flooring from a local donut shop. The project took nine months and less than $800 of supplies and materials to transform the interior.

“It was such a great community effort,” Eaves says. “The flooring is a perfect example. We put it out there that we were looking for unique flooring for the box truck, and a friend who managed a donut shop years ago had six or seven excess packages just sitting at his house. This all turned into the big themes of communication and community.”

The last piece of the project was the bathroom, which again was a culmination of effort, skill and desire to help.

“A friend of ours just sold a building and had a huge stock of plumbing pieces — from repairs or from other stores that were in the building,” Eaves explains.

As for the shower, the team went for simplicity — a solar one, and they used a rubberized truck bed liner for the floor and walls.

Half the appeal of repurpose projects is how far you can take them. Eaves references the Ford Museum in Florida that uses tires for bathroom sinks. “It’s fun to get creative. I’ve seen a lot of high-end repurposes,” he says.

So far Eaves has taken the truck as far as Wilmington, North Carolina, making his way through Virginia, Connecticut, Pennsylvania and Rhode Island. Now he’s heading toward Georgia and Florida. Naturally, the truck has caught a lot of attention along the way.

Eaves captures one of his favorite highway experiences. “I pulled off the road to get some coffee in Virginia, and right off the highway was a U-Haul dealership, I thought I would surprise them and show them what I did to their U-Haul. I parked the truck, got out and said, ‘Hey guys, I turned one of your trucks into a tiny house; I think you might want to come check it out,’” Eaves explains. “One of the guys got really excited. It was like the paparazzi. He takes pictures. Then he calls one of his co-workers over, and he tells him, ‘Get over here; you gotta see this!’”

A typical interaction with the truck happens when Eaves sets up shop in a designated area, presents his first documentary and connects with others who want to learn and share this passion. Then he leads into the truck component, inviting participants to see it and sit inside it with him. He films each interaction, adding to the collections of stories he picks up from town to town, which will serve as fundamental pieces to his second documentary.

My big question for Eaves is: how many people can fit into the truck at once?

Bringing people together, in groups of 12 or less at a time, is what it’s all about. Eaves has learned that getting the word out there is the hardest part, and creating options for people to give is important.

Eaves experienced this need to be kind and do right firsthand when he picked up the reuse tiny house truck at a garage and found out someone footed his repair bill while his back was turned. 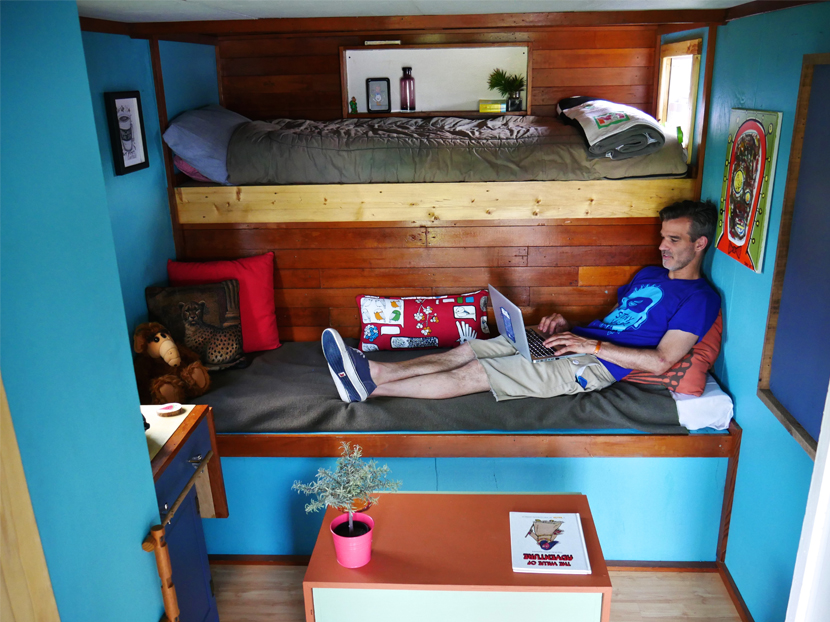 If you give them an outlet and a means, people generally try to help in the ways that they can.

Eaves is combining two movements, the tiny house movement and the reuse movement. “The two movements each on their own are about minimalizing your impact. There are a lot of tiny house projects out there. Even Lowes has a tiny house kit you can buy. When you incorporate reuse materials, you can save even more materials, make less of an environmental impact and save a lot of money.”

Then there’s the artistic side of the project. “You can make a reuse project your own. That’s been a fun part of building this truck with Deek. We have our passions, interests, favorite colors and other things that we get to incorporate,” Eaves says.

Can recreation be just as satisfying as creation? Eaves thinks so. “I’d like to bring reuse to areas of our world where waste is not a focus. It all goes back to the need for new stuff. I can’t stop everyone from using new materials. And in a sense, you can’t have used stuff without new stuff,” Eaves says, “but, let’s focus on using all this used stuff first. Instead of mining for our natural resources, let’s remanufacture the recourses that are already out there.”

To learn more about Eaves and his projects, visit www.boxtruckfilm.com and www.alexeaves.com.