Free Subscription
Home » How to Outfox Your Competition
Contractor Stories

How to Outfox Your Competition

Your competition may not know everything you do. Think about that before you walk away from a job based on your customer's personality.

As contractors, we all share some common goals. We try to sell our products and services, and leave behind happy customers while making some profit for ourselves. To do that, we deal with the general public on a daily basis, which is very interesting to say the least. You get to experience almost every personality that exists; I personally find it very fascinating. Learning to recognize the different personalities and what their triggers are, is one of the keys to making a successful sale. And they come in all types!

There’s the guys that were born into money, and some of them want to pay more than you would normally charge, because they have the perception that the more they pay for something, the more it’s worth. Plus, they would rather die than look cheap in front of their friends. They like talking about how much they paid for something. The more, the better! Those are in the minority, but they exist. Never bid low for that personality.

Then there are the well-to-do folks that made their fortunes through hard work and savvy financial decisions. These people typically make their purchase decisions based on perceived value. Here’s where you bring your sales game. You try to sell yourself to these people. Once they are convinced that you bring more to the plate than your competition, your job is basically done. Don’t be afraid to let them know your capabilities.

The vast majority of people you meet, however, are what I call “middle of the roaders.” What this means is they won’t buy the most expensive product, or the cheapest. If you sell yourself to these people and offer them a middle-of-the-road product, chances are very good that you can make the sale.

These are just a few of the personality types you will meet. There are many more, including: tire kickers, free estimate guys, real estate agents, etc. I typically just walk away from most of this group. They will soak up hours of your time.

And then there’s the infamous “cheapest price guy.” It just doesn’t matter what you bring to the table, s/he is still going to choose the cheapest price. Trying to sell yourself to this person is an exercise in futility. Conventional wisdom suggests walking away from this type of job. Especially if you’re the kind of tradesperson who takes pride in providing a quality system with nice workmanship.

But should you always walk away? Based on my experiences, you may be missing an opportunity. Especially when it comes to hydronics. You have to realize that your competition may not know everything you do. Sometimes you can leverage your hydronic knowledge to win the job with both the cheapest price and the highest profit margin, while providing the customer with a quality system. Imagine that! It all starts with proper system design and engineering. Most of your competition will simply follow rules of thumb when it comes to system design, and thereby, miss the opportunities that you can take advantage of. 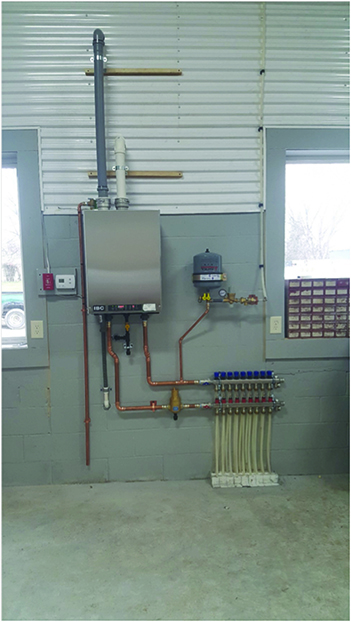 As a demonstration, let’s discuss the radiant floor heating system as seen in the picture to your left

This system is installed in a farm shop. I work for a lot of farmers, and there are quite a few “cheapest price guys” in the agricultural world. So right away you know they aren’t going to go for the most expensive boiler. And the fact of the matter is, you don’t really need all the extra features that come standard in the high-end boilers, in applications like these. You just need a condensing boiler that has all the basic essentials such as ODR control and a modulating burner. In this case we chose an IBC HC13-50. This boiler features a single pass copper heat exchanger and comes standard with an internal pump. It doesn’t have many extras, but it has everything we need. And the internal pump is a nice feature; it takes some of the clutter away from the system piping.

You can’t just pick a boiler however, and expect it to work properly in any old system. The hydronic system has to be designed around your boiler selection. One of the hidden costs for this boiler is the high head heat exchanger. The internal pump does not have a lot of capacity left for the system after pumping the fluid through the boiler (see picture below). Normally, this would require the near boiler piping to be set up in a primary secondary configuration. The manufacturer actually strongly recommends using primary secondary piping for this boiler. This adds quite a bit of material and labor to the job. 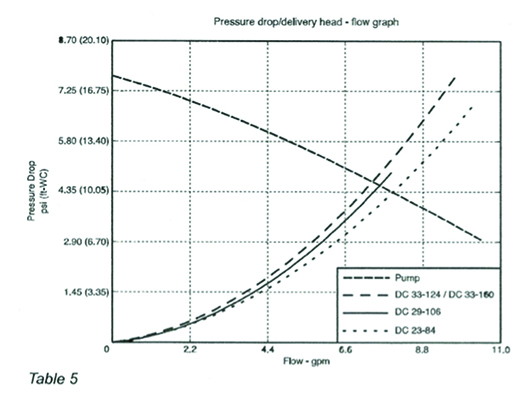 Knowing that I would not get the job if I did not beat the competitor’s price, the added cost of primary secondary piping was not an option. And here’s where the system design becomes critical. I know that most of my competition uses the “300-foot per loop” rule of thumb when it comes to radiant floor heating. The head and flow requirements for 300-foot loops would have necessitated primary secondary piping configuration for this boiler and most other economy boilers. After doing the math, I found that if I used 200-foot loops in the floor, I would be able to direct pipe this boiler and maintain adequate flow through the heat exchanger with the internal pump. Doing this does not require any extra tubing in the floor. You do end up with more loops and a slightly larger radiant manifold. The extra cost of the larger manifold is, however, far less than the costs of having to do primary secondary piping and all the associated hardware.

Having that squared away, the next task is to select the hardware for the system. Here is another place you can shine, if you do proper system design. I see many hydronic systems that have an overabundance of ball valves, boiler drains, etc. It is important to have all the right valves and drains in the proper places for service, but with a little bit of foresight you can eliminate a lot of extra hardware. Whenever you can pull double duty or even triple duty out of one component you should absolutely do so.

Sometimes it is as simple as mounting the boiler a little higher on the wall so that one drain valve can drain the boiler and all the near boiler piping.

In this system the radiant manifold serves no less than seven important functions. It also eliminates a lot of extra hardware that would have been needed otherwise. Some of these functions are made possible by the direct piping set up. First and foremost, it does what all radiant manifolds do, it takes all the flow from one large pipe and distributes the fluid among smaller pipes. And it does it very well. It also does flow-balancing, not only to each individual loop, but for the whole system as well.

Another advantage of being direct piped is that it has valves on both the supply and return manifold, allowing each radiant loop to be individually isolated. That way if one loop springs a leak, it can be isolated and the system can remain in operation while repairs are made. It also has ball valves on the supply and return of each manifold. This allows the boiler to be isolated from the system or the system to be isolated from the boiler. You pick. It has garden hose adapters built into the other end of the manifold, which serves as a purging station. You can use it to purge out each radiant loop. You can also use it to flush out the boiler. You just close the loop valves on the supply and return manifold and now you’re set up to run a cleaner through the boiler. That is especially important for this boiler since the heat exchanger design is susceptible to fouling. And last but not least, it serves as the boiler drain as well.

I just love it when I can do so much work with one piece of hardware. I also like using the Caleffi combination fill/backflow-preventer valves. They come with a system pressure gauge. That eliminates the extra hardware needed to install a pressure gauge in the boiler piping. The Webstone expansion tank valve is also a very nice product. It allows you to isolate and service the expansion tank without getting wet.

The system I used as an example is a small system, single zone and very basic. But the same concepts apply to larger more complex systems. Through proper design you can eliminate unnecessary hardware, which is good for your pocketbook, your customers pocketbook and the environment. So the next time you run into a “cheapest price guy,” before you walk away, take a second look at the project and see what you can do with it!