Free Subscription
Home » Digital Exclusive: How to Use Passive Strategies in Your Design

Digital Exclusive: How to Use Passive Strategies in Your Design

Jump on any flight to anywhere and you are guaranteed to see the architectural language of modernity replicated ad nauseum no matter what the climate zone. Passionate form shimmering in the Sonoran Desert or shivering in the frozen Moscow skyline has more in common on Instagram than to the local climate. Given enough money, any kind of architecture can be built anywhere. Just as one should not plant cacti in the tundra or Japanese Maples in the desert, buildings must be as suited to their environment. Architects who understand the passive impacts of climate will be better able to deliver cost-effective, energy-efficient buildings.

Designing with passive strategies is about understanding the constraints and creating design responses that do not require active mechanical systems. Examples include using ambient energy sources to cool, heat, shade, or ventilate a building space. The challenge with designing for passive strategies is that they must be incorporated in the early stages of the process if they are to be effective.

Before we dive in deeper into climate diagrams, we should make sure we understand what weather files are and how they are used. Basically, a weather file is a spreadsheet containing daily observations of temperature, humidity, wind, solar radiation, and precipitation at for each hour of an average year. Weather files are used by energy modelers and building consultants in simulations where a the heat flowing into and out of the building is measured. To visualize the weather data, several diagrams are typically generated to view different parameters so that conclusions on passive strategies can be formed. In cove.tool, a report is generated with the correct weather diagrams for your building’s location. All of the weather files are automatically associated to your cove.tool project based on the address. 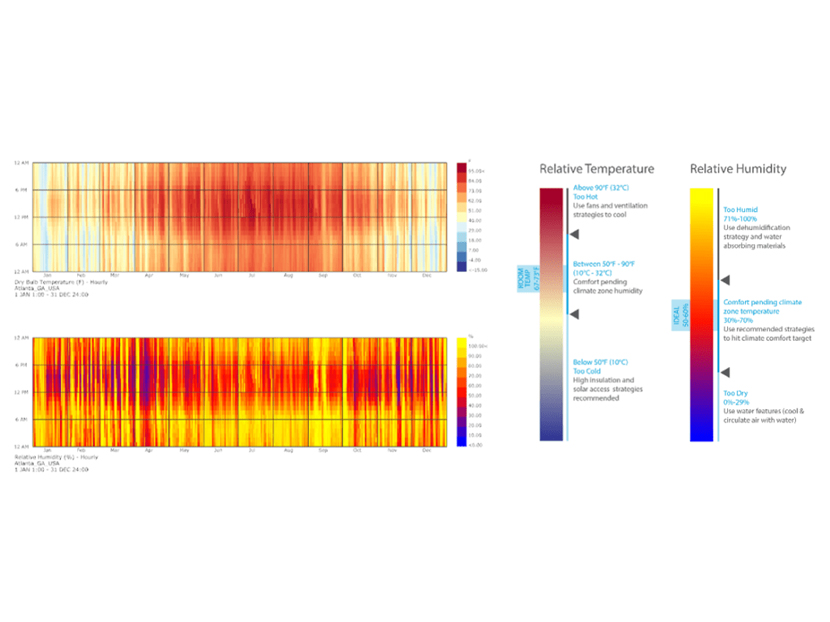 The first concept we are going to review is the Relative Humidity and Temperature Diagrams. These diagrams make up a climate’s primary comfort conditions and are dynamically used in several approaches to generate the rest of the climate diagrams. Understand these two diagrams can help differentiate between using one approach to improve comfort conditions versus using the same approach to worsen them.

Relative Humidity (RH) is the amount of moisture in the air relative to what the air can “hold” at that temperature. Relative Temperature, also known as dry-bulb temperature (DBT), is the temperature of air measured by a thermometer freely exposed to air but shielded from radiation and moisture. Both relative humidity and dry bulb temperature are used to predict the thermal comfort of occupants during critical time intervals. In certain climate zones, they may determine most of a project’s Energy Use Intensity (EUI). On the left is a typical representation for an hourly recording for a typical year in a specific location, in this case Atlanta. The legends, indicated in degrees Fahrenheit for DBT and percentage for RH, correlates the calendar’s seasonal climate conditions. The vertical axis is the time of day and horizontal axis month in the year. By looking at the diagram, one can pin-point when strategies might be preferable. In the cove.tool legends on the right, the help diagrams indicate which strategies are preferred.

In the case of Atlanta, the Relative Temperature Diagram indicates that throughout the day from the months of April to September the temperature can be expected to be 50 degrees Fahrenheit and above, with the hours between 9 a.m. and 6 p.m. are too hot for typical building occupant comfort. In this case, the help diagram recommends using fans and ventilation strategies to cool your space. For this passive strategy, it is important that it be implemented early on, rather than being underutilized and later replaced with costly and energy hungry air conditioning. In the Relative Humidity Diagram, Atlanta is a very humid climate year-round with spikes of “too humid” times periods in the morning and afternoon. This situation could be improved by using dehumidification and water absorbing materials – ideas indicated in the RH Help Legend. Below, additional examples have been added some of the hottest and coldest locations in America for comparison. Left represents Phoenix and right represents Barrow, Alaska. 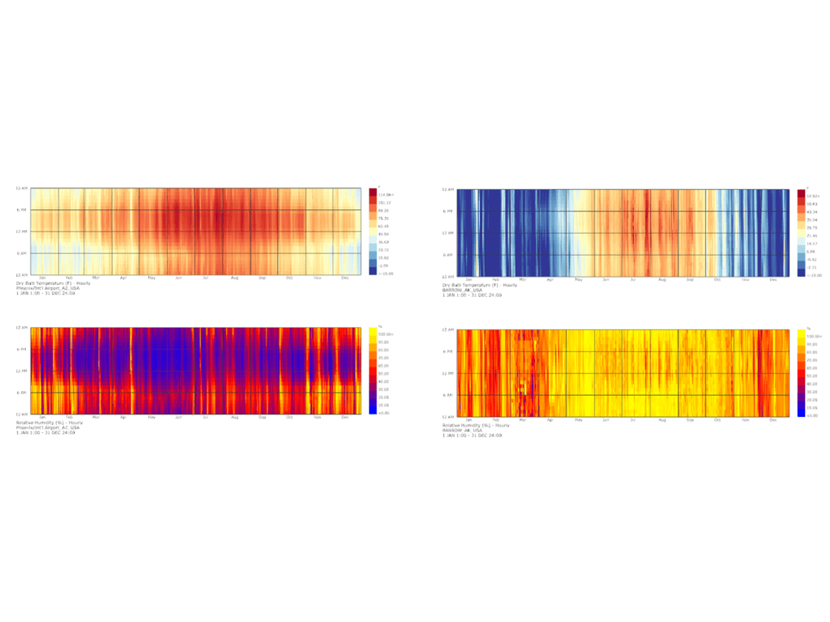 In these extreme locations, you can see the drastic difference in the visualization of each diagram. Also, you can start examining other strategies to be implemented in these regions. For example, the Barrow dry bulb diagram is dominated by cooler temperatures, with the high point of the legend beginning at 57 degrees Fahrenheit. In this case, the cove.tool help legend recommends high insulation and high solar access to allow for heat gain. An easy design recommendation for a quick sustainability win.

Contrast with Phoenix, where the Relative Humidity diagram shows a predominately dry climate where a strategy of water based evaporative cooling should be used. For example, a courtyard with a pool could used to circulate cool air through an atrium to cool the spaces.

This blog originally appeared on www.covetool.com. Follow this link to continue reading.

Alternative Energy Design Engineers & Specifiers Green Building How To HVAC Infrastructure Software Technology
You must login or register in order to post a comment.