After a three-year pandemic hiatus, company welcomes 2,500 to L.A. festivities.

The conference featured five keynote presentations, more than 30 breakout sessions, more than 35 booths at the dual exhibit halls that flanked the entrance to the famed stadium, plus a concert by country singer Brad Paisley and closing remarks from NBA All-Star Earvin “Magic” Johnson.

After an opening party the night before, ServiceTitan co-founder and CEO Ara Mahdessian got the ball rolling on the first full day of Pantheon 2022.

“It’s an absolute honor to host you here in L.A. in a setting that I think is fit for Titans,” Mahdessian said from a stage set behind one of the end zones inside the stadium. “It’s fitting because this Coliseum has been home to several Super Bowls, and I’d like to think Pantheon has become the Super Bowl of the trades, where the best, most innovative contractors gather to learn from one another, to form and renew friendships, and to collectively push the frontier of what is possible in this industry to the next level.”

Mahdessian went on to remind the crowd of the company’s original mission. He and co-founder Vahe Kuzoyan started the company in 2013 to help the trades. Both Armenian immigrants to Southern California, they bonded on a ski trip for Armenian college students by talking about their fathers, who both worked in the trades.

"Our parents brought us here with no money, no language, no connections, and no idea of what to do," Mahdessian added. "They did all kinds of odd jobs to put food on the table."

At the time of the ski trip, Mahdessian was studying at Stanford while Kuzoyan was at the University of Southern California, and both were pursuing degrees in software engineering.

Their fathers eventually became successful in the plumbing and construction trades, but still struggled with proper ways to manage their businesses. What they really needed was, like other busy contractors, an operating system for the trades.

Their sons solved that problem by launching the software platform and mobile app that seamlessly takes service calls; dispatches techs; accepts payments; managing payroll, and, perhaps most importantly, produces and analyzes P&Ls and provides contractors with handy metrics on an easy-to-digest digital dashboard.

While their fathers served as beta customers for the startup nine years ago, ServiceTitan has continued to grow. A recent Forbes article pegs the company’s valuation at $8.3 billion. The company says it’s passed $250 million in annual recurring revenue, up 50% year-over-year, with 7,500 customers, triple its number when it reached billion-dollar-startup status in late-2018. Last September, ServiceTitan reached No. 11 on the Cloud 100, Forbes’ ranking of the world’s private cloud computing companies.

“Home and commercial services don’t rank super high on the glamour scale, but they do on the criticality scale,” Mahdessian added from the Pantheon stage.

Mahdessian said the $1 trillion annual revenue racked in by the home services trades far outweighs the better-known industries of ecommerce at $870 billion and the U.S. restaurant industry at $630 million.

“This level of importance is only going to increase in the coming years,” he added.

With more than 30 concurrent sessions to choose from, we only sat in on a handful. But an all-woman marketing panel proved to be a highlight for us.

For example, we really liked the idea Cassie Pound, co-owner and president of Quality Heating, Cooling & Plumbing in Tulsa, Okla., uses to highlight people in her community.

Pound uses a number of digital billboards that feature three people each week. The occasion could be anything from birthdays, anniversaries, state-winning cheerleading squads and other personal and professional milestones.

These peoples' faces take front and center on the billboards, along with the tagline line “We Love To Celebrate You!” What you won’t see is the Quality phone number; even the company logo is relatively small. 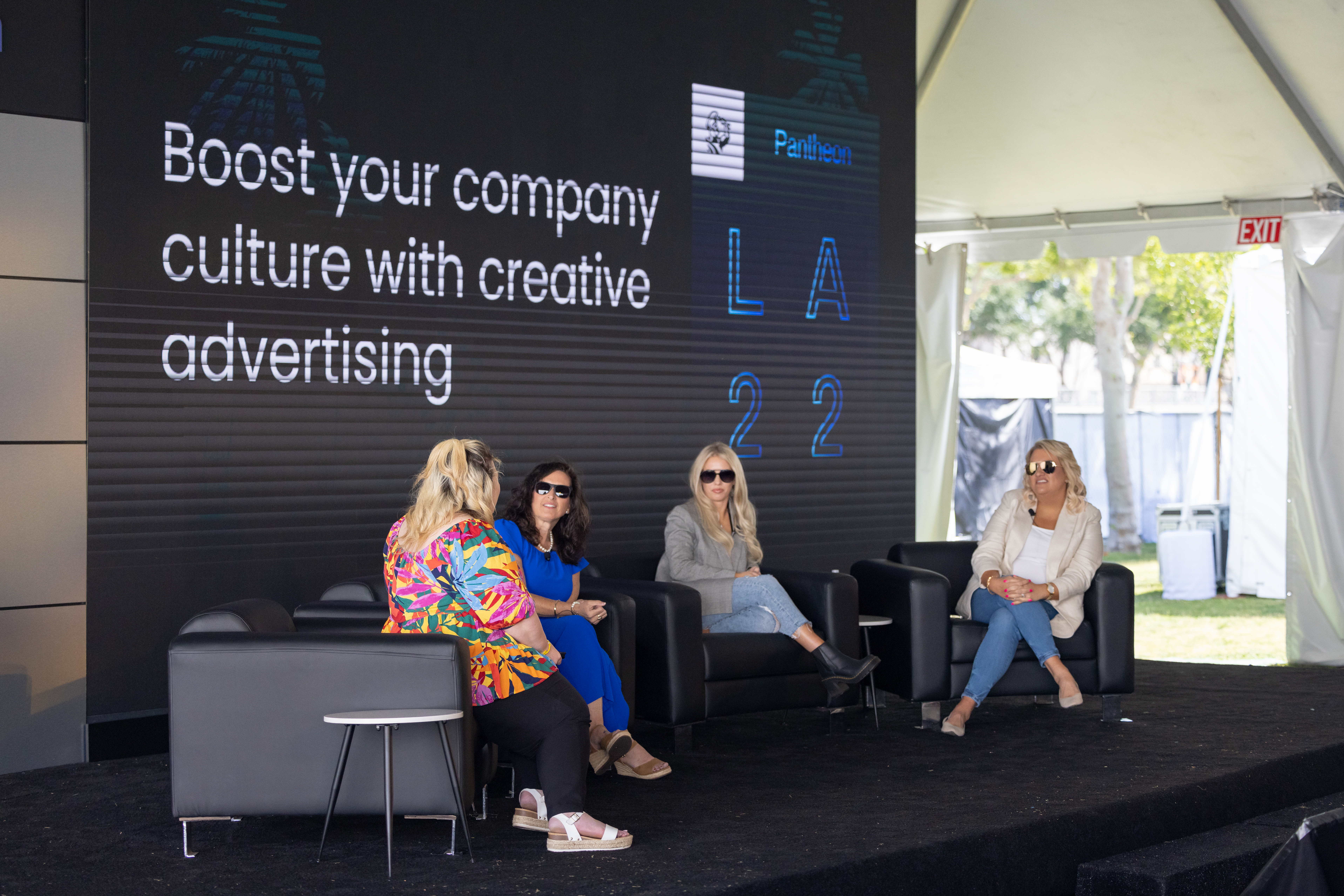 What started out as a 30-day trial campaign is now a year-round promotion.

“Our team sees we didn’t have ‘Serve People’ painted on the side of the building for no reason,” she added. “We did it because we genuinely love our community, and we want to continue to celebrate them.”

Meanwhile, the panelists shared other ideas:

After one of the company’s dispatchers shared her story of surviving breast cancer, Postell took pictures of all the techs wearing something pink – even a tutu, in one case, and put the pictures up on the company website.

“Guys constantly take pictures and videos of their jobs,” she said. “They especially love their really dirty jobs — lining jobs and sewer jobs. They just love to show their work. They’re super-competitive with each other to get the best shots.”

Crystal Williams, founder and marketing strategist at Lemon Seed Marketing, Burke, Texas and the moderator of the panel, talked about the natural momentum that can compound marketing efforts.

“I think there’s power in working for someone that does the billboard campaign,” she said. “There’s power in your team being able to say our owners all over TikTok.”

Plus, Williams said many creative approaches don’t cost much to produce a tremendous ROI.

"We’re talking about organic social media things here,” she added. “None of this is something that they went and put a lot of money behind.”

More than dollars, consistency, she said, is the key.

One of the biggest announcements came on the last of day when ServiceTitan co-founder Vahe Kuzoyan introduced Titan Intelligence, a suite of AI solutions for the trades.

“What’s different about Titan Intelligence is it’s not a separate product, or some one-off enhancement to an existing capability,” Kuzoyan said. “It’s new muscle that’s eventually going to add superpowers to every facet of ServiceTitan.”

These new features enable users to optimize, automate, predict and innovate across every aspect of their businesses by harnessing the power of data.

Using that data, even one-person shops on the ServiceTitan platform will be able to automate repetitive and simple tasks, improve customer experience, predict outcomes, lower costs and stay competitive in a world run by data, the company said in a release.

• Smart Dispatch (in beta) is ServiceTitan's new dispatch tool, which uses machine learning to analyze job data and assist in assigning technicians for jobs based on factors such as geographical zones, skills, drive time, and technician's sales performance to help save time and maximize revenue.

• Price Insights is a feature delivered through ServiceTitan Pricebook Pro, allowing contractors to easily see average pricing in their region, enabling them to competitively price their services based on the average cost for similar services locally.

• Marketing Pro Ads (in beta) enables home service marketers to lower their cost per lead and maximize ROI. By leveraging Google Ads' measurement tools and dynamic call tracking features, ServiceTitan users are able to see the true impact of their Google Ads budgets and then optimize and automate the flow of key revenue, job and audience data back into Google.

After the presentation, we caught up with Chief Technology Officer Anmol Bhasin during a media lunch held in one of the stadium’s skyboxes.

“Titan Intelligence is effectively bringing the power of data to an industry that has been left behind a little bit,” Bhasin said.

Before joining ServiceTitan, Bhasin developed AI products at Salesforce.com Inc. and Groupon Inc., and his intentions are to continue that work for the trades.

ServiceTitan customers will have the equivalent of their own personal consultant built directly into the platform.

AI takes all the data naturally generated by a home service business and combines it with additional data such as local demographics and overall economic trends.

The “mash up,” as Bhasin calls it, presents contractors with “actionable insights” they can take to improve their services.