Digital Planning Pays Off in the Field

‘Prefab everything’ approach at Harris improves productivity and overall operations.

We guess you could call the structure located at the corner of North 7th St. and North 19th Ave, just west of downtown Minneapolis a “garage.”

The two-story 668,000-square-foot facility under construction for Metro Transit, the primary public transportation operator in the Minneapolis–Saint Paul area, will indeed include storage space for 216 buses, 24 maintenance bays, fueling and washing space and administrative offices. Expected to be completed later this year, the $113 million garage is also being built with the environment in mind and will feature a solar thermal wall, a rooftop solar array and a stormwater reclamation system (more on that later).

Since the project broke ground a little over two years ago, the Heywood Bus Garage Constructors, a joint venture of Knutson Construction and Adolfson & Peterson Construction, has relied on Harris, based in St. Paul, and one of the country’s largest mechanical contractors, for the PHCP work.

“All of our projects start with a ‘prefabricate everything’ approach,” says Michel Michno, CEO, Harris. “Our processes not only focus on prefabrication, but also on early decision-making and planning. Early decision-making is how we maximize prefab: It brings the right people together at the right time to determine what is best for the project.”

Harris ranked 8th among the top 50 mechanical firms in the 2021 Top 600 Specialty Contractors list published by Engineering News-Record. The company ranked 53rd overall. Since opening its doors nearly 75 years ago, Harris has grown to 15 regional offices with more than 2,000 employees.

Throughout the long Heywood project, Ryan Cousineau, project manager, Harris, has kept tabs on the mechanical contractor’s push toward value engineering and prefab, all of which starts long before the work in the field begins.

“Prefabrication has been evolving for decades,” Cousineau adds, “but especially in the last 5-10 years as owners want more complex buildings, and they want them done faster while still maintaining a manageable budget.”

General contractors also push owners to bring in key MEP trades sooner when a construction project might still be in the concept and design stage.

“Our goal at the beginning of a project is to work closely with the owner, architect, engineers and general contractor to design a building that meets everyone’s needs – and we try to do this in a way that saves as much construction time and money as possible,” Cousineau explains. "It’s a missed opportunity otherwise and one more reason to  have communication with the entire project team very early on.” 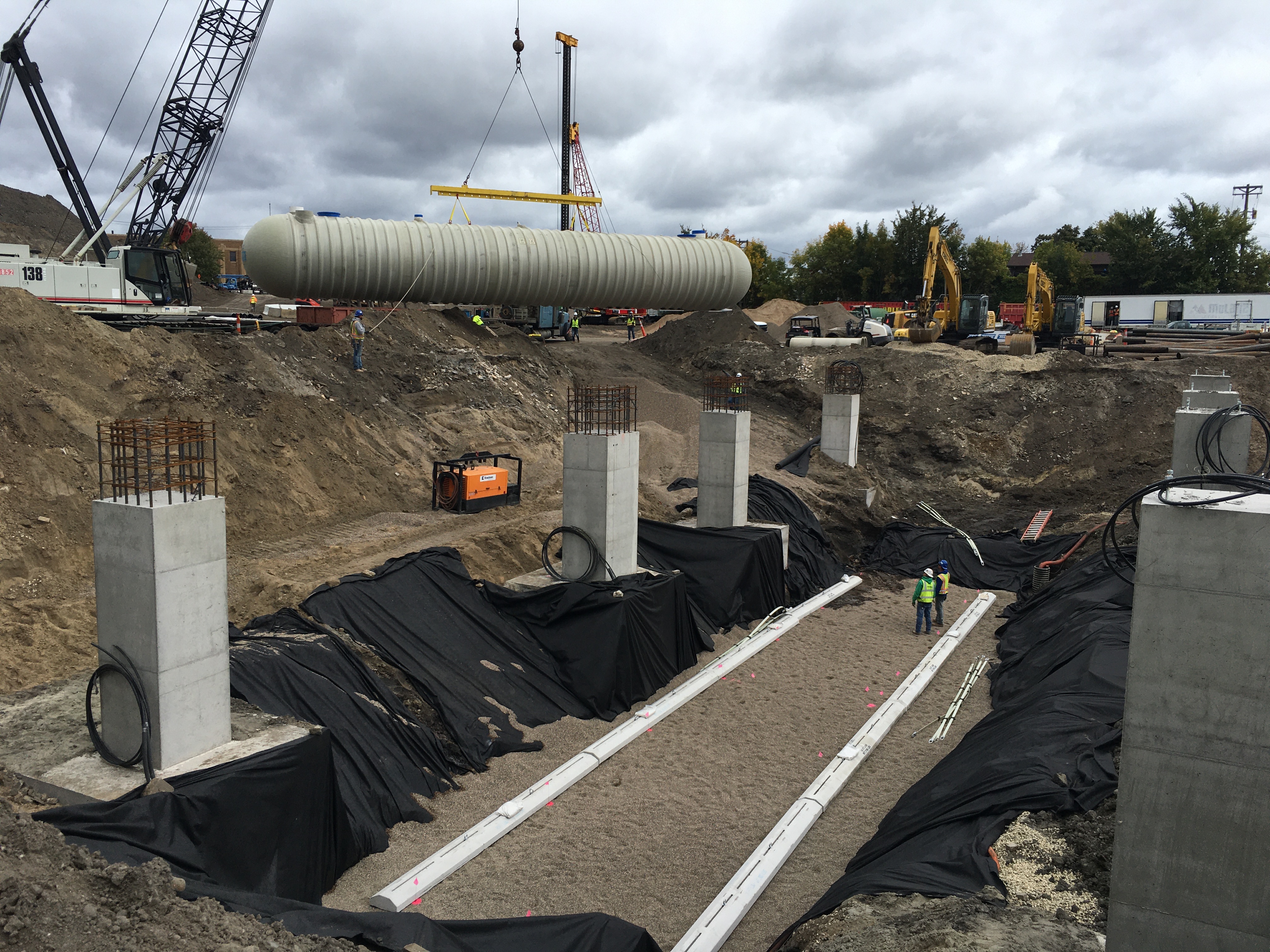 As Cousineau notes, CAD, VDC, BIM and prefab have all transformed how contractors think about design stages, as well as the process in which buildings are constructed. He says Harris’ vision on the Heywood project grew as they sat down and began to find ways to make the project even better. Accustomed to design-build, what started as a plan-spec job constructing mechanical straight off the prints turned into much more.

“We saw where prefab could save time and money on the project and presented our ideas and their benefits to the GC and owner during the preconstruction phase,” Cousineau says. “Sometimes it’s about educating the owner and exploring what’s possible when you bring on an experienced mechanical contractor as a partner. We have a big blend of opinions and expertise at Harris that helps to provide innovative solutions.”

Cousineau adds that while not all Harris’ recommendations on the Heywood project were accepted, the consortium did say yes to two-thirds of its PHCP redesign ideas, which added up to reducing more than a mile of piping from the original design, and provided $1 million in value-engineered savings thanks to opportunities to prefabricate work and engage in project planning early on.

Here are some more details on the project worth considering:

• The stormwater reclamation system and overflow storm system were redesigned to reduce total footage by more than 3,600 linear feet, a 33 percent reduction.

• The building’s heating/cooling plant was changed from a water-to-water heat pump plant to a simultaneous heating and cooling plant with waterside economizer.

• For the hot water system, mains were dropped to 8-inch pipe from 10-inch pipe, and the heated water piping system was reduced by 1,700 linear feet. This reduced system volume by 20 percent.

As a result, pumps, air-handling units, expansion tanks and air separators, roof hoods, and simultaneous heat/cool heat pumps were re-selected. The changes are projected to save more than $30,000 per year in energy costs by using simultaneous heating/cooling, pumping reductions, fan horsepower reductions, and optimizing the use of the geothermal field. Finally, the reduction in the previous numbers of compressors, motors, dampers and controls, is expected to also reduce maintenance costs.

• The sequence of operations was rewritten to reduce 194 points.

• Simultaneous heating/cooling heat pumps were made into a single packaged unit for easier control.

• Harris provided Revit drawings to the engineer of record to use in the revised project change order drawings to reduce rework. And, Harris used a live Bluebeam studio session for using redlined PDFs of the construction documents as the basis of its VDC. 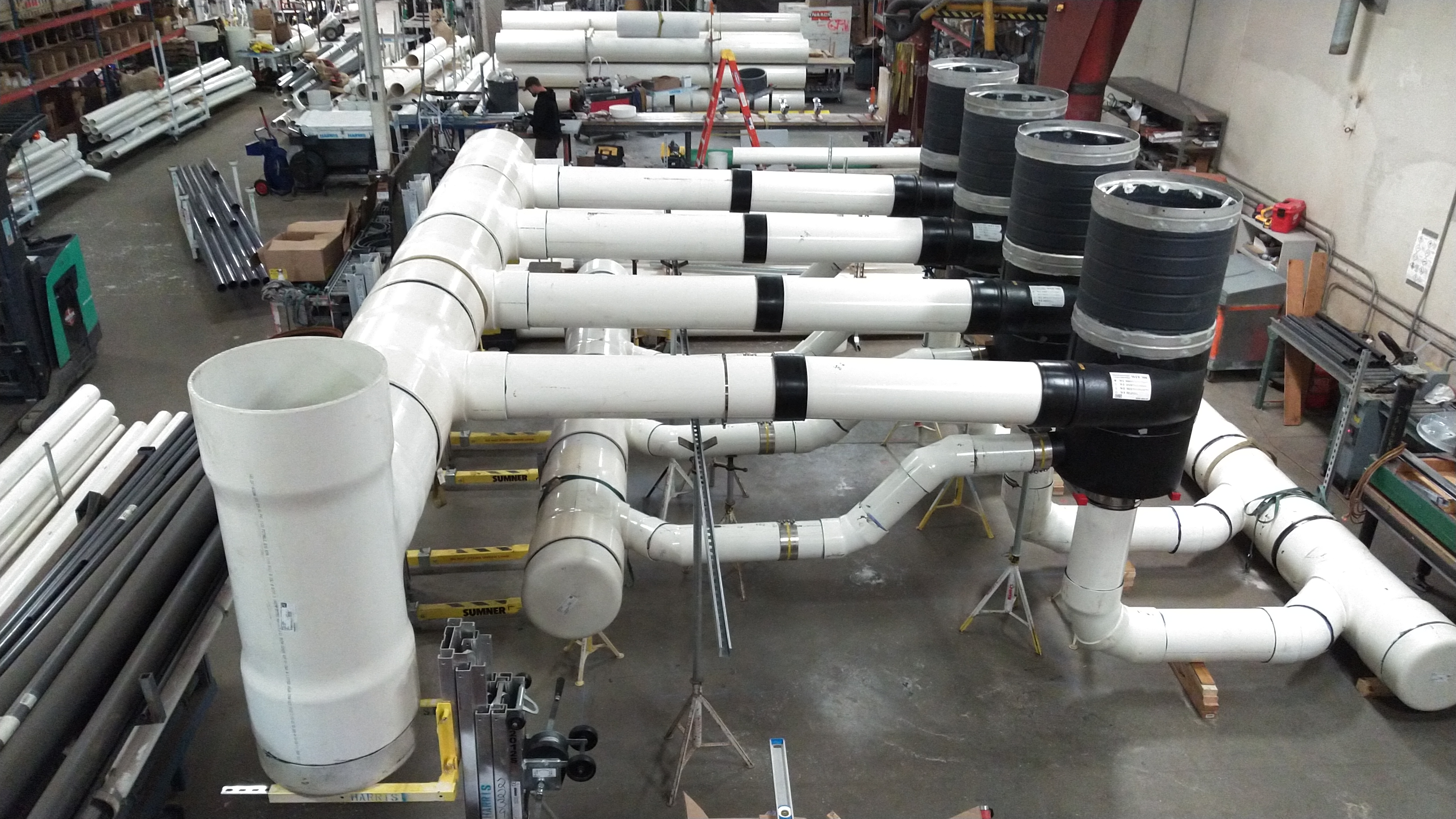 The JV’s clash detection team was able to work hand-in-hand with Harris to pre-model the majority of the mechanical/plumbing systems for the building, which allowed Harris to prefabricate most components. As a result, most components were put together offsite, ready to be installed when they arrived at the job site, streamlining the construction process.

By the time the prefabricated materials arrived at the site, 75 percent of the labor associated with that work had already been completed off-site. Then it’s just final assembly and installation, which improves jobsite safety, product quality and helps meet fast-paced schedules.

One of the last components Harris completed for the project included the prefabrication of a massive pump skid. The 21-foot by 10-foot skid, weighing roughly 15,000 pounds houses the base-mounted pumps, expansion tanks, air separators and pot feeders for the chilled water, ground source water and heating water systems running the building.

By prefabricating the skid, Harris was able to allocate several hundred hours to a controlled environment fabrication shop and also shorten the pump installation and piping activity schedule to one day in the field. Harris engineers within its BIM/VDC division produced the CAD drawings which allowed the prefabrication team to build the unit with exact precision.

“The working relationship that both parties of the JV have with Harris made it very easy to produce value engineering options to present to the owner to help drive the total costs down for the project,” says Jacob Garr, assistant project manager at Knutson. “Many of the ideas actually provided a better product for the owner as well. The collected knowledge and experience that Harris and the JV have together makes it very easy to work through any issues that arise, which is key, especially for mechanical scope, which is typically one of the most complex.”