How Dan Holohan became my mentor and guided me down the hydronics path to a rewarding career.

I got my Sheet Metal Worker’s Journeyman card from Local 73 in Chicago in 1987. I loved making reverse 90-degree elbows, three- and four-sided transitions, y-branch fittings with curved heals and throats. I even liked making simple plenums and return air drops. For fun, I’d make toolboxes, wastebaskets and trays for my audio cassettes. If you could dream it, I could make it.

Tinman was not only my moniker; it was also the name of my business. More people called me Tinman than the name my parents gave me.

I wore out a couple of those Richard Budzik fitting fabrication books, “The 40 Most Frequently Used Fittings.” I’d always have one on my desk and another one getting shredded from everyday use out in the shop. I really loved what I was doing. I had a full sheet metal shop with an 8-foot brake, a 4-foot box and pan brake, jump shear, Pittsburgh machine, spot welder, button lock machine, bar folder, etc.

I had it made. Being a tinner was my calling. I was sure of it. Yeah, I installed and serviced boilers, but it hadn’t grabbed hold of me yet. Yet.

At some point in the early to mid-’90s, a few of the architects I did work for started adding radiant heat for basements and garages in their Request for Proposals. At first, I resisted a bit; they pushed back. They liked my metalwork and wanted me to do their hydronic work as well.

I gave in eventually. Anything I do, I want to do it to the best of my ability. Makes sense, right? If something is worth doing, it’s worth doing well. That last line isn’t mine, but I borrow it all the time. I’m sure the Duke who coined it in 1774 isn’t going to mind.

The first resource I picked up was a Bell & Gossett “Engineering Design Manual” given to me by a co-worker my rookie year (see Figure 1). The papers and articles in this oversized, three-ring binder were written by guys with names such as Bob Dilg, Gil Carlson and H.A. Lockhart. At the time, they were complete strangers to me. I didn’t have a clue who they were. They wrote articles with titles of “Proper Pump Location” and “The B & G System of Primary & Secondary Pumping.”

These articles were written mostly in the 1960s, but some dated back to the early 1950s. I figured concepts this old being read from old musty pages weren’t of relevance anymore. And they weren’t exactly fun reads either, so I put them back on the shelf and continued my research. I was still in my early 30s and not a fully developed human being yet, so I’m using that as my excuse.

The internet was still in its infancy, but as I did my research, one name kept coming up again and again and again — Dan Holohan, another name I was seeing for the first time. I figured it might be a good idea to check this guy out. HeatingHelp.com is where I started to hang out and listen to the heavyweight boiler guys share their wisdom on everything from the new condensing boilers and soldering tips.

I knew this guy wasn’t going to be boring. There was already a spark about him that intrigued me.

Then I found out that this Dan guy has four daughters that he loves, he’s a proud Irishman, and he writes books about hydronics that are fun, informative and easy to read. I think this is going to work out well for me. I have three kids, all daughters whom I love dearly, and my maternal grandparents were born and raised in County Cork, Ireland.

I didn’t know it then, but hydronics would soon become my vocation as well as my avocation. Dan Holohan is solely responsible for the fact that my career path would turn on a dime, and I can’t thank him enough for it.

This is how that happened.

Dan always gives credit to his mentor, Gil Carlson, “The Man Who Always Knew.” Gil is the guy who came up with the concepts and wrote the papers about these industry-changing subjects. Dan is the guy who brought them to us and further changed the industry. I’d argue that Dan did more because he reached more people and shared these ideas in such a way that the pages almost turned by themselves.

As I mentioned, I was in my 30s then. I’m in my 60s now, and I still see hundreds of installers pumping directly at the PONPC (point of no pressure change) and more incorrect attempts at primary-secondary pumping than correct ones. It’s not rocket science.

From reading his books, I learned that Dan collected and read very old heating books. I do the same now. Are you seeing the impact he’s had on me? I learned about a place called Levittown on Long Island, where there’s an entire community with in-floor radiant heating panels installed with less-than-ideal practices.

I worked in a similar community in Schaumburg, Illinois. Slab-on-grade homes, copper piping, no slab insulation, no edge insulation, with the boiler installed in the smallest of closets right off the kitchen. We called the neighborhood the “W section” because every street name began with a “W.” It could’ve stood for “Watch Out!”

Dan’s story is awesome, but I can tell you that working on these systems was a bit of a nightmare. Leaks were common and a pain to fix.

He taught me how the Federal Aid Highway Act slowed the growth of hydronics in America to a snail’s pace. I learned that Europeans were (and still are) miles ahead of us in hydronic technology. I have borrowed more lines, stolen more ideas and tried more new products because of Dan’s writing. I was headed down a new path. It was literally a game-changer for me. It's where and when I fell in love with hydronics.

Hold on, I’m not finished yet.

I’ve only met Dan a couple of times. Once at an ASHRAE show and another where he came to Chicago to teach his primary-secondary seminar. This was in 2001 and it wasn’t only a teaching seminar.

My daughter Stevie had written a letter to my fellow Wet Heads about her diabetes and epilepsy — and how scared she was about both (see Figure 2). 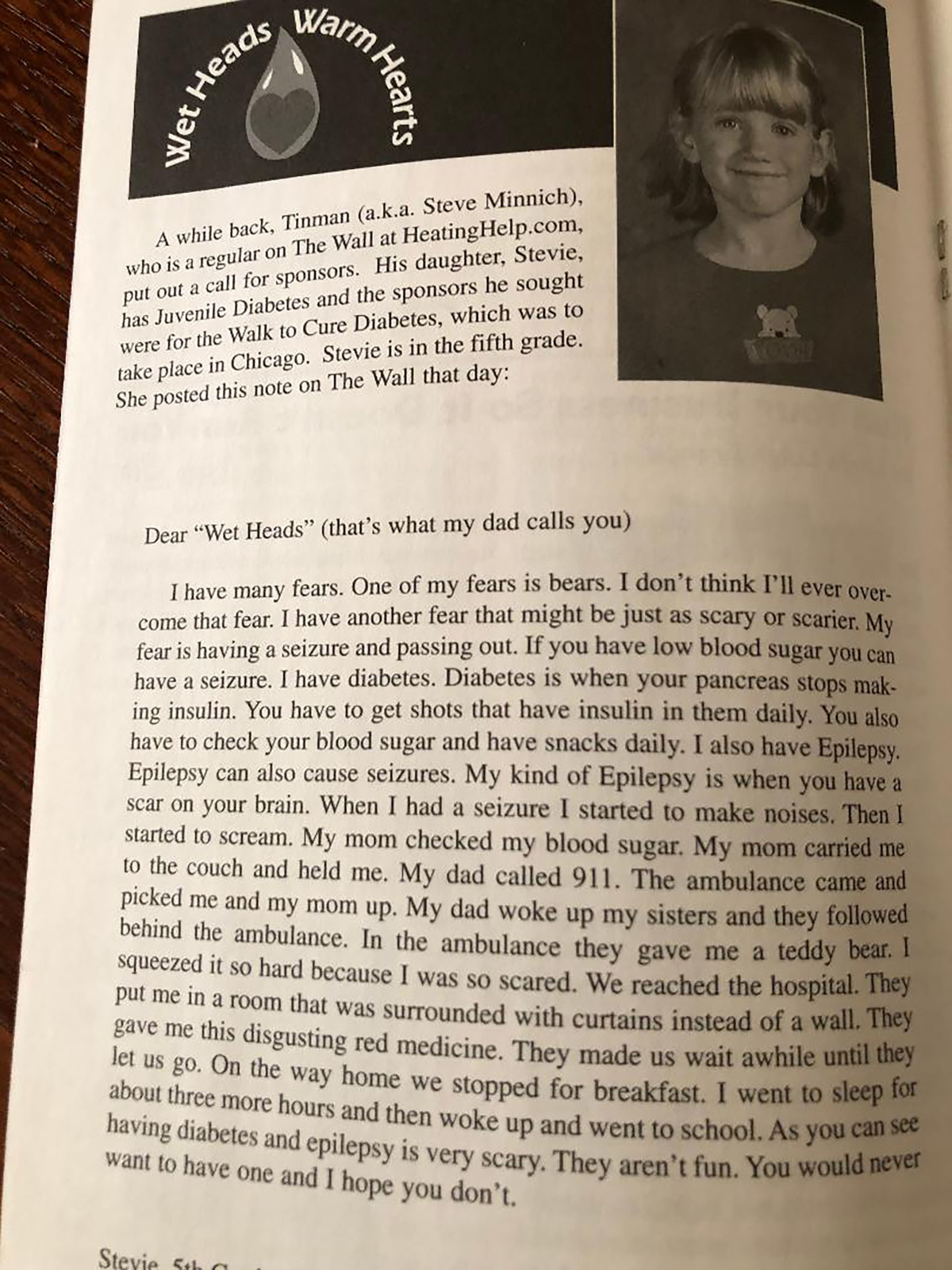 Here’s what Dan had to say on the adjacent page.

“I read Stevie’s words and thought I could help out by raffling off a couple of the manuscripts from my books. I also threw in some of the stuff that you see in this catalog. We raised a lot of money that weekend, and it all went to finding a cure for that disease. I also volunteered to do a benefit seminar on ‘Primary-Secondary Pumping Made Easy!’ in Chicago. All the money we collect will go to the Juvenile Diabetes Foundation in Stevie’s name. ECR International (Dunkirk and Utica) stepped up as corporate sponsors of this event; for that, I am most grateful.

“But this isn’t about me. This is about kids like Stevie. I think that the researchers will someday cure juvenile diabetes. All it takes is time and money.

“To help with the money part, I decided to get some caps made that we could offer here in the catalog and at the HeatingHelp.com website. I had this picture in my mind of a Valentine's heart inside a drop of water. The Valentine is for this brave young girl named Stevie, and the drop of water symbolizes not only the heating work we do but also a tear of joy for the children that bless our lives each day. Surrounding the water are the words, ‘Wet Heads, Warm Hearts,’ and on the back of the hat, a simple statement of support: ‘Stevie’s Team,’ it reads.

“I’m hoping you’ll buy one of these special caps for 20 bucks. It’s a top-quality product, and we’re going to donate all the profits to the Juvenile Diabetes Foundation in Stevie Minnich’s name.

“I know that when it comes to what’s needed to find a cure, it is just a drop in the bucket, but I believe that small acts of kindness are cumulative. A little here, a little there and before you know it, you’ve got a lot accomplished.

“If you add one of these special hats to your order, you’ll be doing an act of kindness, not only for Stevie but many other children throughout the world. And I guarantee you’ll feel great when you put that cap on your head!

I couldn’t write about Dan without including this. It would be wrong on so many levels. If you don’t already know Dan, this will give you a clearer picture of who he is. He’s always helping someone, if not in his books, then with benevolent acts like this. What Gil was to Dan, Dan is to me — my mentor, as he is to thousands of others.