To enhance the safety of its students as they walk across the longest pedestrian bridge in the state during the winter, Utah Valley University (UVU) took advantage of the technology and the many benefits that a hydronic snowmelt system would deliver.

The hydronic system for the bridge was named Project of the Year by the Building & Construction Division (BCD; www.plasticpipe.org/BuildingConstruction) of the Plastics Pipe Institute, which represents the plastic pipe industry. Pipe manufacturers and PPI member companies Uponor (Apple Valley, Minn.) and REHAU (Leesburg, Va.) received the honors during the association’s annual meeting in May 2021.

The association’s annual awards program recognizes projects and members for exceptional contributions to the industry. Submissions in the association's divisions are reviewed, evaluated and voted upon by the PPI members.

The pedestrian bridge was part of the UVU expansion plan as a way to provide access between the Intermodal Center in Orem, Utah, and the UVU campus. The university knew the 970-foot-long pedestrian bridge would need a consistent, reliable, long-life and low-maintenance solution that didn’t include salting or sanding surfaces, or moving equipment across the structure to remove snow and ice. Plus, the system would need a dependable way to supply the heated glycol solution.

“Orem receives an average of 40 inches of snow every winter,” notes David M. Fink, president of PPI. “This makes maintenance incredibly important, but the size and positioning of the bridge make around-the-clock manual snow removal nearly impossible and very difficult to maneuver any equipment. It is estimated that more than 5,000 students would be using the pedestrian bridge every day. 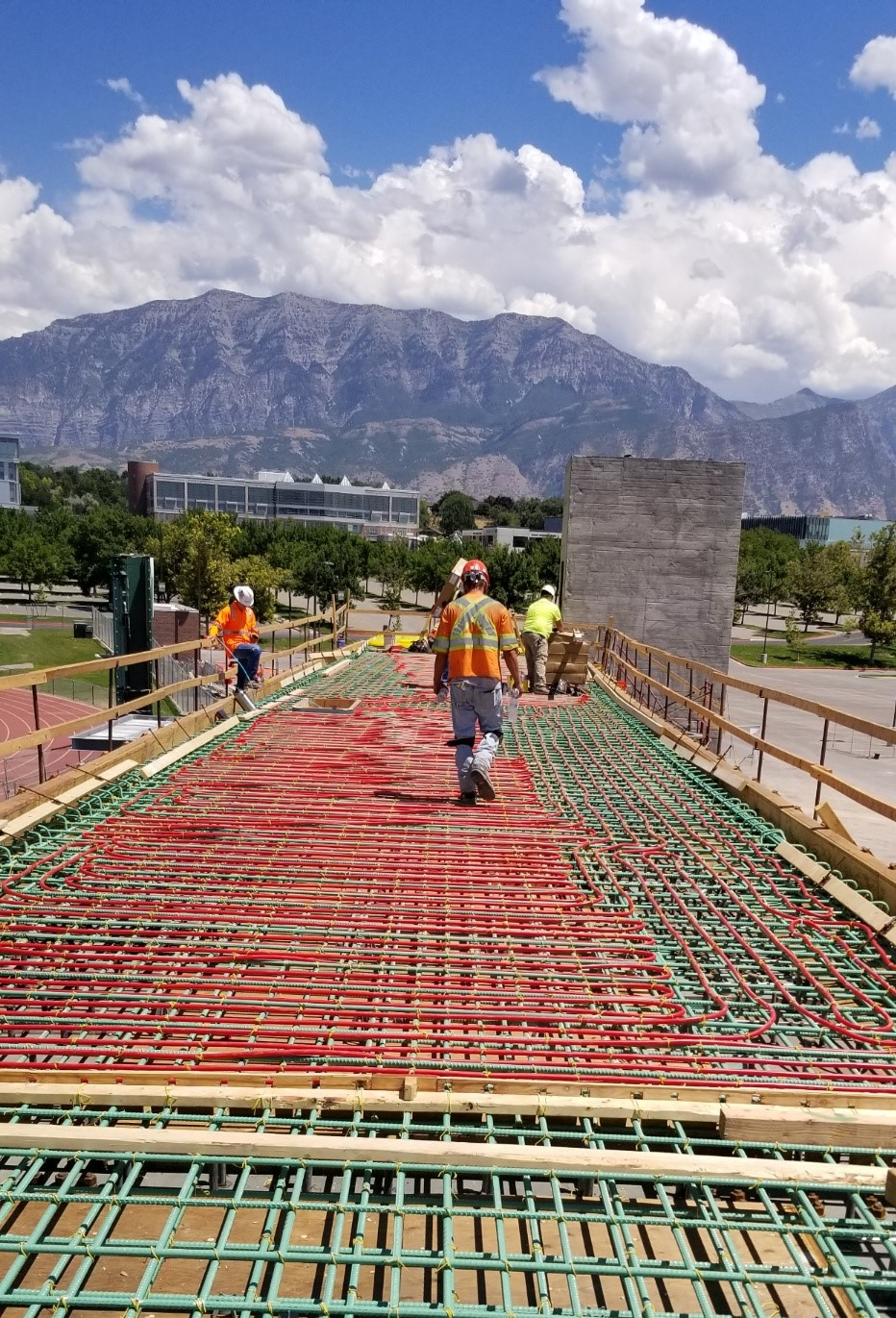 “With open sides, the walkway is subjected to blowing snow in wintertime, so the university wanted a heated concrete walkway to increase pedestrian safety and to nullify the need for a multiperson crew to be on-site 24 hours a day. This is a unique type of snow melting project that has rarely, if ever, been done before in North America. It’s a marvelous accomplishment most worthy of the PPI Project of the Year Award.”

UVU brought the design challenge to Aron Frailey, owner and chief mechanical engineer of Thermal Engineering (Salt Lake City). The main concerns with the UVU Bridge project were the structure’s height; spanning an active interstate highway, a street and railroad tracks; plus be subjected to normal swaying.

While Frailey has decades of experience in hydronic snowmelt systems, he had never designed or installed a system for an elevated 15-foot-wide bridge suspended 35 feet in the air over one of the most heavily trafficked roads in the state, which could not be shut down. To meet the university’s goals, Frailey needed piping solutions that would be durable enough for the harsh conditions but also be practical and viable for his construction crew.

The hydronic supply and return loop under the walkway would have to be done without shutting down the roads or the rail lines. Originally, the supply-and-return piping specification called for 4-inch steel pipe. Because of its heavy weight, steel piping would require numerous installers, heavy lifts and a lot of welding. Frailey was concerned about the safety of welding that high off the ground under the bridge deck while cars, trucks and buses would be moving underneath.

He had several other concerns as well about the function of steel piping on the project. The weight of steel piping would have a significant impact on the structure. As all bridges are designed and constructed to move, rigid steel pipe would need special accommodations to withstand that movement. In addition, the corrosive chemicals used on the freeway below the bridge could splash up and impact metals on the underside of the bridge.

Investigating piping alternatives, Frailey learned about and eventually recommended PP-RCT — a durable, lightweight, noncorrosive polymer pipe offering numerous benefits for the project. It would be easier for installers to handle high up on the bridge, eliminated open-flame welding, could flex with the bridge’s movement, plus it could withstand the salt and magnesium chloride that Utah uses to melt snow and ice on its highways.

PP-RCT is a polypropylene random copolymer with modified crystallinity and temperature resistance. PP-RCT piping products are rated for continuous operation at 180 F (82 C) temperature, with pressure rating depending on their wall type (SDR). PP-RCT pipe also may include reinforcement layers for benefits such as reducing longitudinal thermal expansion/contraction.

Frailey looked to REHAU’s PEX tubing for the snowmelting loops embedded in the concrete pathway, and to Uponor for the PP-RCT supply and return piping as opposed to steel or other metals. This would be Thermal Engineering’s first major project using polymer PP-RCT piping.

Shipped in 19-foot lengths, a stick of 4-inch (125 mm) PP-RCT weighs 63 pounds — a fraction of its steel counterpart. The lighter weight not only made installation faster and easier but also eliminated the heavy weight burden on the structure itself. Plus, PP-RCT connections are heat-fused as opposed to welded. This was a big benefit for Frailey, who is always concerned about the jobsite safety of his workers.

Additionally, the ability of the PP-RCT to form a monolithic pipeline and still be flexible enough to follow the movement of the bridge was one of the biggest advantages for Frailey.

“The structure is intended to move in every direction all the time — left to right, backward and forward, up and down,” he says. “I was concerned about the joint integrity of a steel piping system with all that movement, and I really liked the flexibility of PP-RCT to handle it. PP-RCT is an awesome product — the flow characteristics of the pipe, its light weight and flexibility, and the ease of lifting and maneuvering it — all these benefits are huge compared with steel. In fact, we’re already using it on other projects.”

The radiant loops also were designed with the movement of the bridge in mind. “We designed to match the way they wanted to pour the bridge, so the PEX loops would never cross an expansion joint,” he explains. “Each loop connects to its own custom-built manifold in the slab of that section of the bridge, which then connects to the PP-RCT pipe. REHAU supplied custom coil lengths to minimize the number of circuits and optimize the snowmelting design.”

The design used 34,500 feet of 5/8 inch RAUPEX O2 barrier PEX tubing for the snowmelting loops embedded in the concrete pathway, which is supplied with heated antifreeze through 1,900 feet of 2 1/2-inch to 4-inch (75 mm to 125 mm) PP-RCT supply-and-return pipe.

The 5/8-inch PEX tubing was fastened directly to the bridge deck rebar at 6-inch on-center spacing before being encased within concrete. The tubing was connected to fabricated manifolds installed within the bridge deck and accessible via access panels. Each manifold is supplied with a heated antifreeze solution by the PP-RCT pipes.

“The UVU Bridge project is an excellent example of how polymer piping materials such as PEX and PP-RCT can meet demanding project needs that metals can’t provide,” states Lance MacNevin, P. Eng., director of engineering for PPI's BCD. “The polymer piping materials were able to provide benefits for not only the installer — in relation to faster, easier and safer installations — but also to the structure itself — regarding weight, flexibility and corrosion resistance.”

He adds: “The bridge is a showcase to professionals in the commercial construction industry that polymer pipe is the future of smarter building design, capable of meeting project and installer demands while providing long-lasting service and performance. Upon completion, the UVU Bridge project became the largest installation of a hybrid PP-RCT and PEX snow/ice melting system so far.”

Frailey notes: “This bridge is a very effective application of a hydronic snow/ice melting system. I can’t imagine any other practical way of removing the snow, and it operates very cost-effectively as well.” l

Steve Cooper has reported on a variety of plumbing, construction and infrastructure projects for several decades. Based in New York, he has traveled extensively to conduct on-site news interviews with professional engineers, contractors, government officials and representatives of major companies supplying the industry. Cooper can be reached at 516-623-7615 or steve@scacommunications.com.

Engineers & Specifiers Engineering Hydronic Piping Systems Hydronics/Radiant Projects
You must login or register in order to post a comment.