Spring Training: Back to Basics

Now that winter is in our rearview mirror, it’s time to review some of the core basics of an efficient, trouble-free hydronic system.

Not long after the first of the year, baseball fans start counting down the days until pitchers and catchers report to camp. It’s that time of year when the absolute best of the best come together to sort who’s going to be on the opening day roster and who’s being sent back to Triple-A ball.

It’s also the time when these same professional baseball players go back to the fundamentals. Pitching mechanics, squaring off to lay down the perfect bunt, arm angles, release points, hitting the cutoff man, hitting behind the runner, getting a good jump on a Texas leaguer or deep drive to one of the alleys, and finding your groove in the batter’s box. These skills need to be fine-tuned, even by the pros who earn millions of dollars each year.

We’re no different in the hydronics industry. We all get caught up in the daily madness of no heat calls, screaming pumps, air-bound radiators and the worst — being on call for a week straight during the depths of winter. Now that spring has arrived, most of the winter is in our rearview mirrors and the one-day changeovers are less common. The boiler techs can exhale just a little, giving us time to review some of the core basics of an efficient, comfort-providing, trouble-free hydronic system.

Let’s start with one still being ignored by many.

Are you pumping away from the point of no pressure change? No? Why not? It doesn’t cost you or your boss an extra penny. Every system needs a circulator and an expansion tank — no ifs, ands or buts. Their proper placement, though, is up for debate.

“It’s easier because the pump is already installed on the return of the boiler.”

“Pumps last longer when cooler water is running through them.”

All these reasons are easily debunked with just a little bit of research. I will tell you this with certainty — the pumping away arrangement has no drawbacks, and you’ll get a quiet, air-free system, fewer call-backs and a happy customer. Here’s why:

When pumping away from the point of no pressure change (PONPC) — the expansion tank — the circulator adds pressure to the system, which aids in air elimination by forcing oxygen to stay in solution until it can be removed by air vents or an air separator. It also will reduce the risk of pump cavitation by providing more pressure at the inlet of the pump. 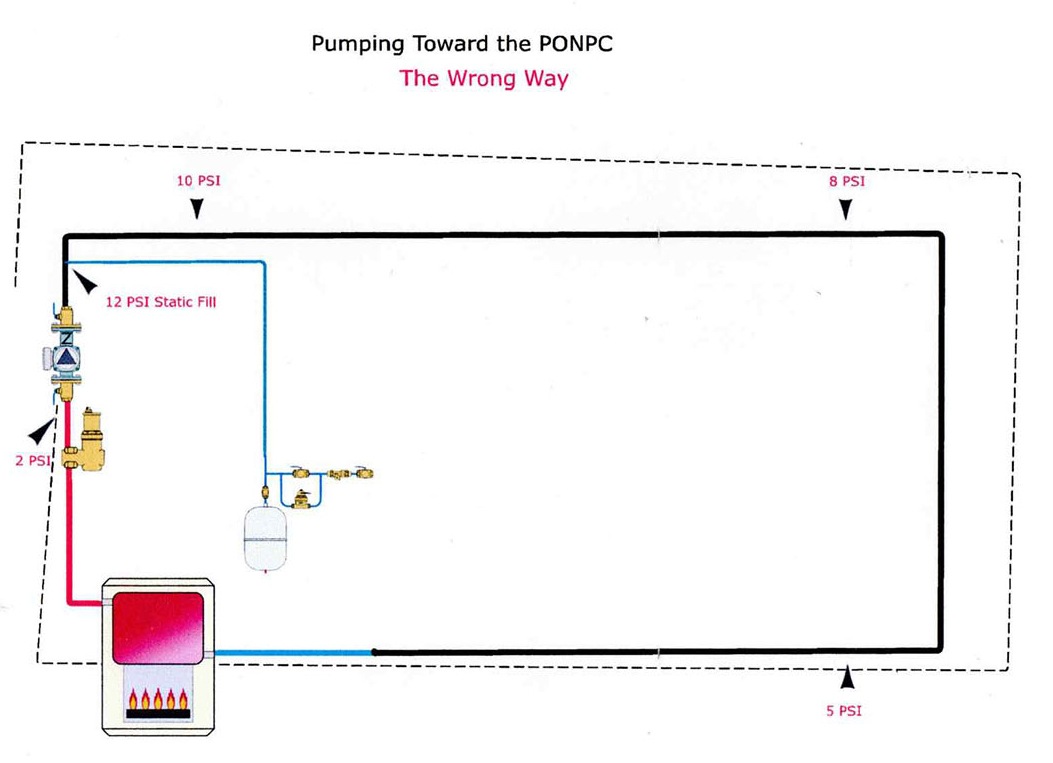 Here are the system pressure dynamics when the pump is idle

In both cases, a few things will happen when the circulator bangs on:

The PONPC is quite literal in its meaning. Install a pressure gauge at the tank and see for yourself. The complete inaction of the gauge not moving while every other gauge in the system will move is magical.

The lesson to be learned here is to pump away from the PONPC. Pump away even if you don’t quite get it yet. Your customers will tell you how good you are and you will have ample opportunities to do some quick repipes. More work, more money.

Diaphragm expansion tanks come from the factory pre-charged to 12 psi because the static fill pressure is typically 12 psi or less. It will cover your typical two-story house, so it makes things easy.

Be sure the tank is disconnected (dry) from the system when checking its pressure and adding pressure.

Remember that tanks lose a small amount of pressure each year. It’s never a bad idea to check it on service or maintenance calls. And when you’re installing them, make it easier on yourself and the technician who follows you by installing an isolation valve/drain combo to isolate them from the system.

As I mentioned, we’re usually dealing with a 12-psi static fill pressure. How do we know for sure what it should be?

You’re on a service call; the complaint is that every time there’s a call for heat, its sounds like a freight train running through the copper, finned-tube baseboard. Other than an obvious mechanical failure, the circulator is likely oversized or the pipe is undersized. In that case, some simple reverse engineering is in order.

And you don’t have to be an engineer to solve this problem. I’m not and I’m guessing most of you aren’t either. All you need are some facts from the jobsite and Bell & Gossett System Syzer — or plug some numbers into the common equations we use while considering sound hydronic principles.

First step complete. Next, we’ll choose a pipe size to move 15 gallons/minute while keeping the noise down and any entrained air moving along.

To get an approximation of the head loss of the piping system, I measure the building. Using the total equivalent length method, I come up with 8 feet of head.

So, I need a pump that can deliver 15 gpm at 8 feet/head near the middle of its curve.

It’s late in the day and I’m tired, so I decide to pull up Taco’s Pump Selection Tool on my iPad. When I enter those two values, the program shows the correct circulator should be a Taco 0010. The system operating point is in the middle third of the pump curve. Would any of the others get you heat? Sure, but not efficiently or quietly. And with some, premature failure is inevitable. 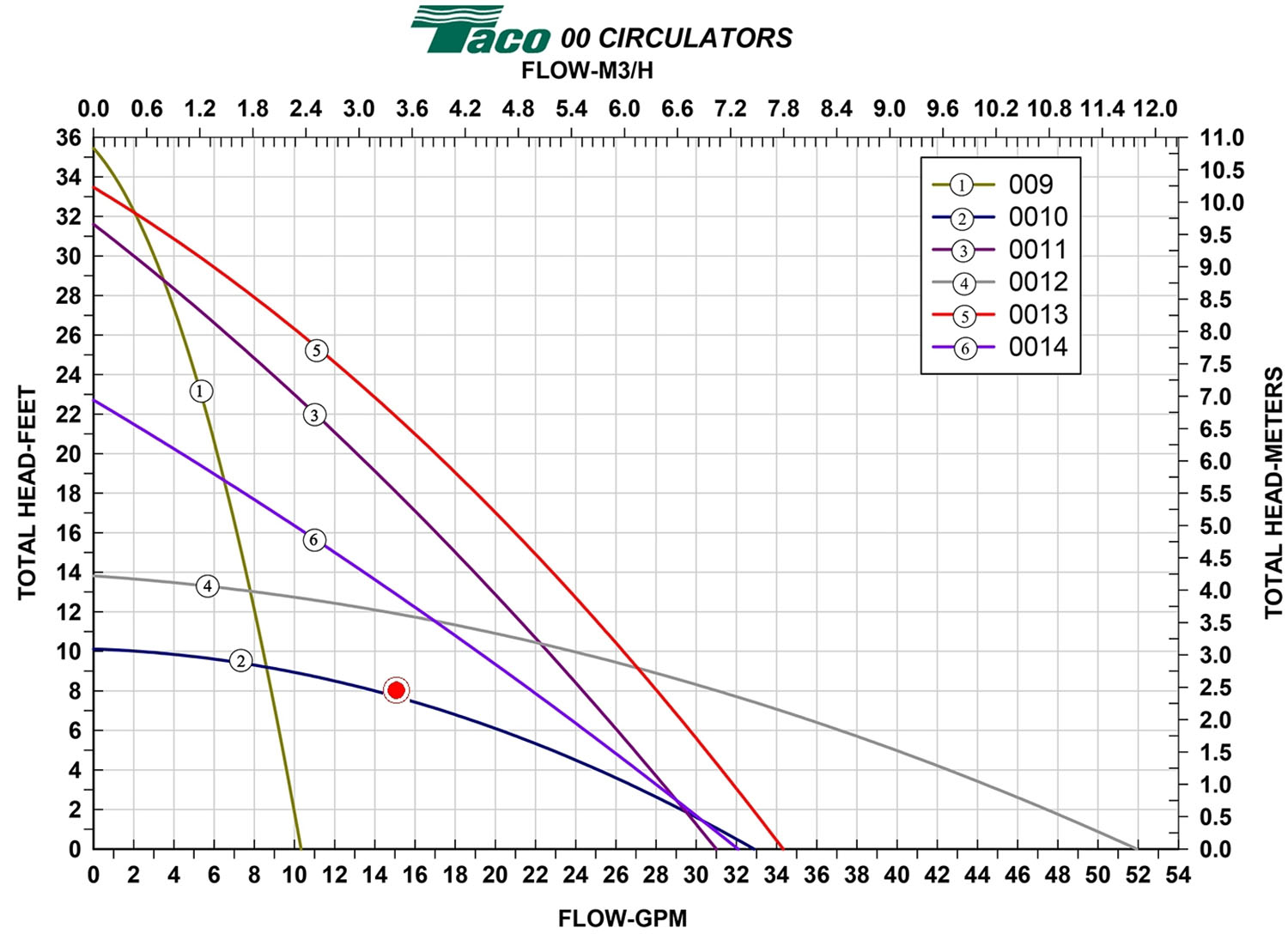 What’s in there now? A Taco 0012. It’s a great pump but not ideal for this application. Once it settles into the system’s head loss, it’ll be operating at a much higher gpm and a flow velocity higher than 5 fps, outside our acceptable range. At this point, I’d consider the problem solved and give the customer the option to change over to the 0010.

For technicians whose work is mainly boilers and the systems they’re connected to, the beginning of spring marks the time when some of the pressure is off. I’m not saying you won’t have work, but I know from experience you can exhale a little. No-heat calls wind down and the days get longer, which allows us pros to get back to work on the basics.

If you want to stay in The Show, you have to put the work in.