Back in the 1990s, Uponor introduced a PEX piping system with its ProPEX expansion fittings. Of course, the company also launched it own expansion tool to help contractors put it all together. But Uponor soon learned it excelled at all things PEX, but not so much when it came to making tools.

“Our tool worked,” says Kate Olinger, senior marketing manager for Uponor. “But it was part hand tool and part power tool so we started to realize that if wanted our PEX system to really take off, we were going to need to find a partner that was really good at making power tools.”

Around this same time, Milwaukee Tool was starting to do its own searching. Well known for its Sawzall introduced in 1951, the manufacturers was looking to reinvigorate itself by concentrating on the needs of its core MEP contractors, and in particular lead product innovation with cordless tools.

“We wanted to put together an ecosystem of tools that was going to drive productivity for these users,” says Morgan Sokany, senior manager of product marketing for Milwaukee Tool. “In the case of plumbing and mechanical contractors, it was very evident to us that we really needed to focus on helping those contractors make the best piping connections as they could and do that free of errors but as quickly and as efficiently as possible. Because making the best connections are really what a contractor’s reputation is all about.”

As a result, in 2010 Uponor with a quality fitting and Milwaukee with a quality tool launched its first M12 and M18 ProPEX Expansion Tools to install the Uponor PEX piping system.

“Uponor and Milwaukee both have very similar philosophies around delighting the customer and really solving their needs,” Olinger adds. “It’s been a great partnership over the years as we’ve continued to innovate.”

Milwaukee’s steadfast approach to its PEX expansion tool lineup was to automate as much of the connection as possible to help eliminate any risks or concerns installers might have. One important feature of the tools was an auto-rotate mechanism that ensures an even expansion. A single trigger pull initiates the tool to rotate, expand, and reset automatically, ensuring consistency across the entire installation. 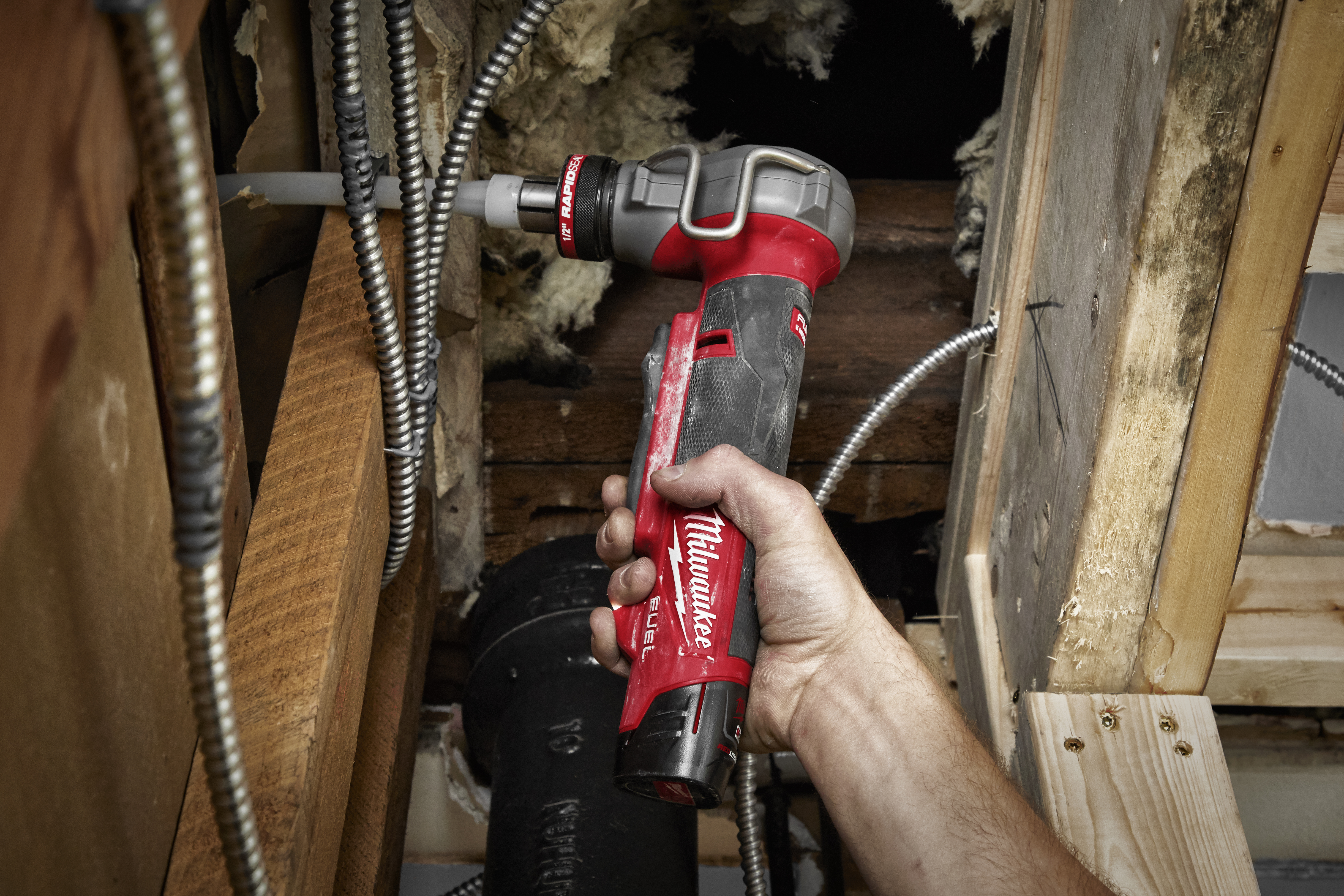 As the tool’s design progressed, Milwaukee was able to make the process faster and allow for better access in tight locations.

The original launch was with the M12, mainly used for residential work. But the M18 quickly followed, which expanded into the light commercial and commercial sectors. As Uponor extended its commercial offerings with larger diameter piping and fittings, Milwaukee kept pace with larger expansion tools.

In 2015, for example, Milwaukee came out with the M18 FORCE LOGIC ProPEX Expansion Tool to handle up to 3-inch diameter Uponor PEX.

Compatible with the entire M18 system, the new tool is part of the fastest growing cordless system in the industry, now offering more than 70 cordless lithium-ion products.

The latest outcome from this partnership is Milwaukee’s new M12 Fuel ProPEX Expander, introduced last November and designed for 3/8- to 1-inch expansions.

Providing up to 35 percent faster connections, the new ProPEX Expander features a POWERSTATE brushless motor, delivering sustained peak power even under the toughest conditions, and an extended dual-actuating trigger for better access in tough to reach workspaces.

The expander will come standard with the new ProPEX Expander Heads with RAPID SEAL, designed to provide faster sealing connections in colder temperatures while maintaining the expected time to insert a fitting.

Like its M12 predecessor, the 4.5-pound (without the battery) M12 FUEL ProPEX Expander is equipped with an auto-rotating head for quick, uniform expansions and built-in LED lights allow for convenient operation.

In addition to the POWERSTATE brushless motor, all M12 FUEL products also feature REDLITHIUM battery pack and REDLINK PLUS hardware and software to deliver power, run-time and durability on the jobsite.

More from this author