Our theories applied on a three-story multifamily project

Gary and I have covered a lot of ground in our last six articles in this magazine. We focused on transforming high performing building hot water systems fired with hybrid solar thermal and heat pumps. We explored how smaller pipes deliver hot water faster without excessive pressure loss. We looked at how much energy waste can result if you skimp on pipe insulation.

Now we want to get real – namely to design and install a real Practically Perfect Plumbing (PPP) system in a multifamily building. We have an amazing example for you – one that is unfolding even as we write this article.

In our first few articles, we explored how we designed and built the hot water heating systems for the award winning Solara NetZero multifamily project near Schenectady, NY.  Extensive flow monitoring helped us use fundamental physics and Gary’s research to choose pipe sizes that would minimize energy and water waste and get hot water to the taps really fast. Once built, we confirmed our success with more testing and discussions with tenants and maintenance personnel.

As word spread about our success at Solara, visitors came to visit and talk to us about the design of the buildings and our hot water plumbing approach. One visitor was a manager of reconstruction work at a large affordable housing company with tens of thousands of apartments in many states. We really hit it off and eventually convinced he and others in the company to consider applying the concepts to one of their new seniors-only building projects near Utica. We were elated but wow – challenged to say the least.

When we jumped into this project, the concrete pad had been poured and contracts let for the first of three buildings; we were kinda late to the party! What we discovered in the mechanical drawings was no surprise (in part, because the design was a carbon copy of the plumbing already installed in the three earlier buildings at the site). The design for the 35 unit building as below featured large diameter hot water pipes (2-½ to 2”) and a vast traditional trunk/riser/branch pipe network. Our monitoring at those earlier buildings had revealed flow maxima of substantially less than 3 gpm at the 99% percentile point. Trunk lines 2-½” in diameter seemed excessive, to say the least. 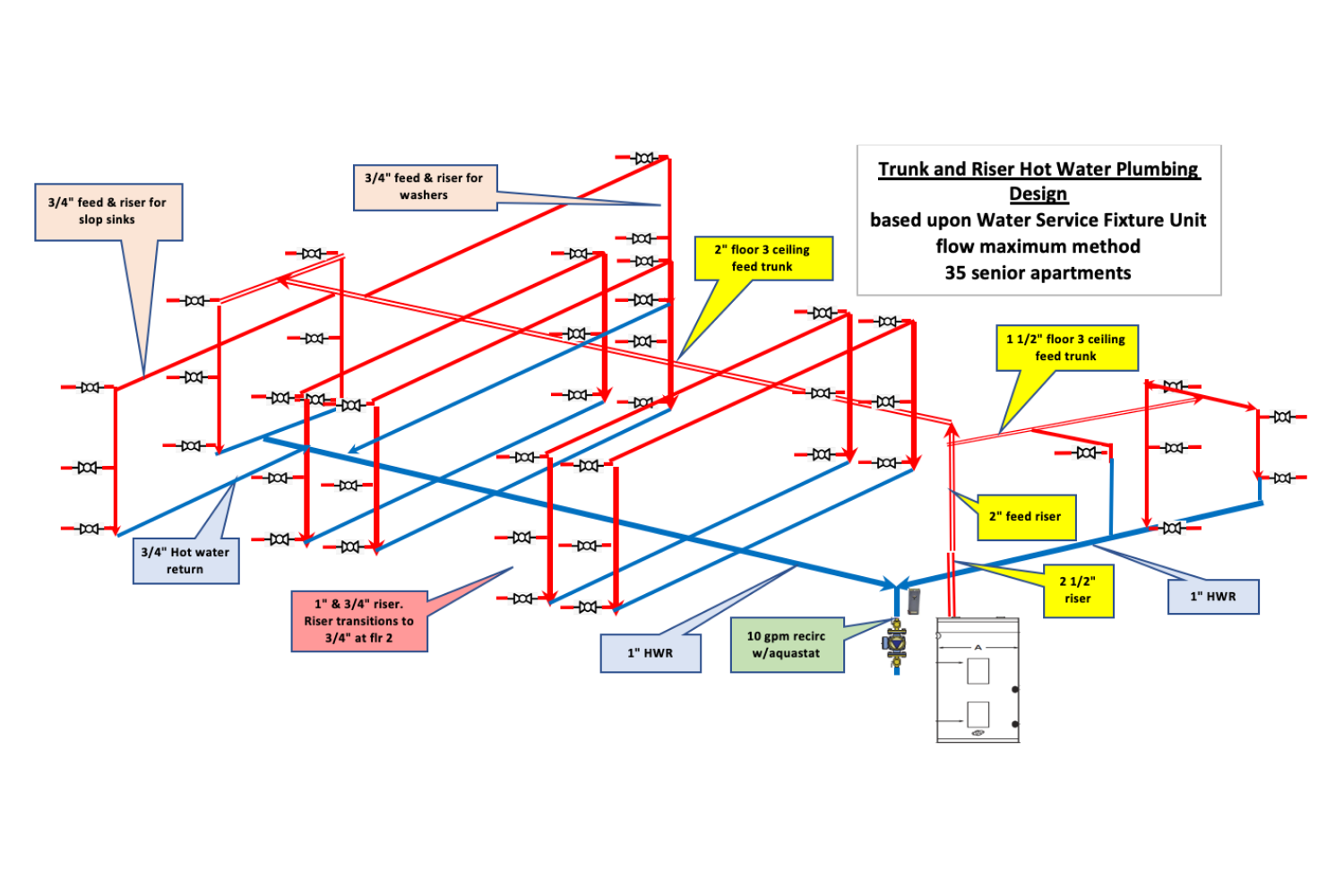 WSFU vs. Appendix M vs. Reality

We delved very deeply into the design to better understand its hydraulic underpinnings and the energy and time to tap characteristics. Large hot water pipes from two very large gas fired hot water tanks carried water to the ceiling of the top third floor and risers north and south plunged down to the ceiling of the first floor to provide hot water via ¾” branches to each apartment. These risers, each with a separate balancing valve, connected back to a recirculation pump which returned the water to the master mixing valve and the tanks in the utility room. In all, it was a lot of pipe to install and to radiate heat. Time for the plumbing doctors to do some diagnostics and prescribe a treatment plan.

First – the forensics. Gary delved diligently into the pipe network and the engineering underpinnings. He suspected and later confirmed that the ICC code’s Water Supply Fixture Unit (WSFU) approach was to blame. This approach was developed by Roy Hunter in the1930s and 1940s and subsequently became the basis for pipe sizing in the national model plumbing codes, including the IPC. At the time of its development and codification, water flowed through fixtures and into appliances at whatever rate the available working pressure allowed. In short, Gary confirmed that these pipes could easily deliver 51 gpm of hot water to the 35 apartments. Contrast that with my actual measurements of 2-3 gpm maximum!

Simultaneously, I began to envision different network designs for smaller flows, one of which featured a double loop serving the north and south sides of the buildings. For his part, Gary looked at an alternative design basis presented by the UPC in its Appendix M guidance (Water Demand Calculator version 1.4). This approach indicated peak hot water demands of 12 gpm, about ¼ the flow suggested by the WSFU. Together, we agreed that a triple trunk loop with much smaller pipe would work just fine and reduce the number of feet of piping (not including the apartment distribution twigs) by a large amount; in large part because we eliminated almost all the hot water risers.

Having solved the trunk line issue, we turned attention to the apartment specific distribution design. Here, we chose 3/8” tubing home run twigs from a valved manifold for both hot and cold water. The client liked having individual valves for each twig and the seven stub hot/cold “minibloc” manifold was surprisingly affordable and a truly elegant piece of engineered plastic. Gary and I refined the design and arranged a ZOOM presentation to the clients and the plumbing contractor.

Our meeting was very productive and the plumber very supportive – he even suggested an even simpler design – two single loops with short branches to manifolds for each apartment. While these 6 foot branches would be ½” PEX and add about 5 seconds to the arrival time for each fixture, we were satisfied that tenants would not be unhappy.  (Figure 2) We consulted closely with the client’s favorite architectural engineer to prepare the specs for the design and spec changes and we were in gear – or so we thought. 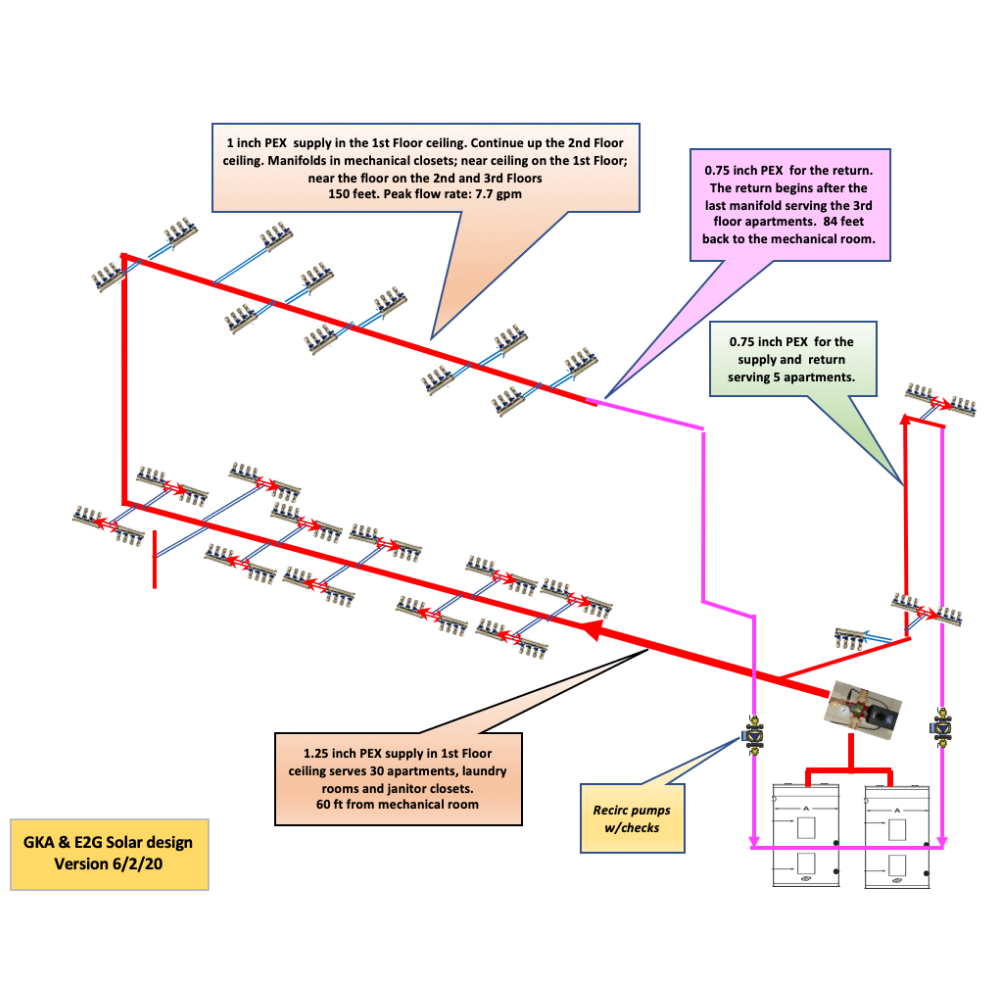 A couple of days before installation was to start, the plumber had some second thoughts and delivered a whopping change order demand to the GC, arguing that the extra pipe length associated with multiple home run twigs would bust his original budget. We argued that 3/8” twigs were easy peasy to pull and would not need insulation for most of their length, unlike the pipe associated with the trunk and branch rectilinear style he preferred.

Off-line discussions ensued and three days later, the plumber suggested that we congregate at the construction site to witness and document a “PEX Challenge” – an installation competition between the two styles with seven twigs. He seemed convinced that the branch and twig style would take less time and look better (he preferred rectilinearity, a throwback to his copper pipe days).

With the clock ticking, he and his colleague pulled the seven twigs one at a time from a big roll on the floor, affixing the twigs to truss members with plastic talon-type nailed hangers. The twig pulling part was easy and only took a few minutes. The talons, however, were problematic, forcing the fellows to mount and move step ladders every 3 feet for each twig along its length and awkwardly swing the hammer among the mechanical stuff and wood truss bracing; 35 minutes later they were done.

We restarted the clock for their trunk and branch style. Instead of PEX on a roll, they used ½” sticks of PEX with Viega PureFlow type press fittings. The installation proceeded efficiently but the nail type talon hangers posed the same hammer problems and less than half of the piping was rectilinear. More time was required for drilling holes in the studs and plates. In the end, this style took the same amount of time. I came away with a heightened appreciation for the need for better hangers and wiser installation procedures.

Back at Solara the next day, we witnessed that same process in action by a different crew who accomplished this job with four twigs in 15 minutes. They used a mix of talons and wire ties for aligned twigs, sometimes with screws instead of nails. With practice, they might be able to do the job even faster as they gained familiarity with the apartment layouts.

The approach at the new buildings near Utica could be even better had the utility room been located in the middle of the building and the valved manifolds located above a dropped ceiling on the second floor. This approach would allow installation of a single trunk in either direction with very short branches to six stub manifolds feeding a triple stack of apartments as illustrated in this diagram. These twigs are short because they cross from the manifolds through the trusses and up (or down) to the fixtures. The longest ones in this design approach 20 feet with time to tap of less than 10 seconds.

We are really delighted that we will soon have 10 buildings in upstate New York with compact plumbing and 3/8” tubing home runs for hot water. The three new buildings near Utica will be identical to earlier ones at the same site using the original WSFU based distribution system. We will be doing in-depth flow rate, pressure and hot water time to tap assessments along with hot water use and recirculation heat loss analyses. Discussions with the plumbers at both Solara and the Utica jobs will allow us to recommend faster installation techniques. These data will help us document benefits (and costs) of our practically perfect plumbing.

More from this author
Gary Klein