Ken Cornwall, spent 20 years as a mechanical contractor before developing a PVC single stack system in 2006. Cornwall formed the company to create and manufacturer a system similar to the Sovent cast-iron system that has been used successfully for more than 60 years. The PVC system costs less, is easier to handle and install, plus lasts forever compared to cast iron, specifically near coastal areas.

PHC: Can you tell us what ProVent Systems oﬀers to plumbing contractors?

KC: ProVent Systems oﬀers a drain-waste-vent (DWV) single-stack system used in multistory hotel/apartment-type projects. Other additional vertical product lines, such as ProSet sleeves, enhance the value when installing the ProVent single-stack system. The ProSet firestop sleeves were first tested by UL under the new modern device method known as “Through Penetration Devices” in 1982.

PHC: What do you mean when you say multistory hotel/apartment-type projects? Are there only certain types of buildings where your single-stack system can be used?

KC: Our definition of hotel/apartment-type projects is this: multistory buildings where people spend the night when not in their own homes. Examples are hotels, apartments, condos, student housing, nursing and senior citizens homes, hospitals, convalescent homes and even prisons. It is any project that has many bathrooms stacked on top of each other on separate floors.

This is where the ProVent single-stack DWV system works and costs less than conventional DWV systems. It saves the most money for the plumbing contractor, building contractor and owner for both time gained to complete the project and less piping used.

All the other conventional DWV systems requiring vents and revent piping can be eliminated. ProVent vents all its vertical stacks and horizontal branch piping by using its Stack Vent fitting. The Base Vent fitting is used for venting the horizontal main drains. 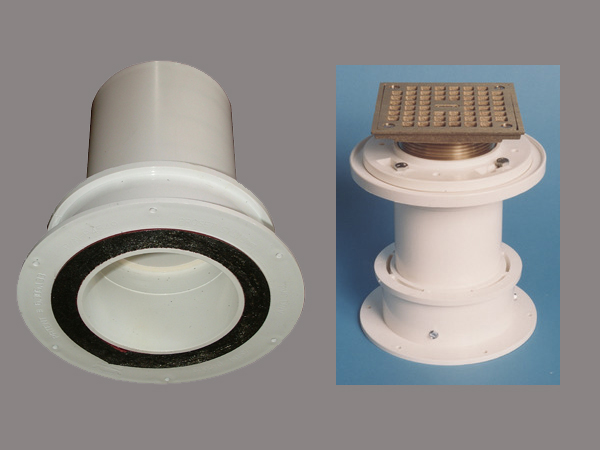 PHC: Why are we always hearing about contractors wanting to fabricate?

KC: This is because of the continuing skilled labor shortage, and this is not going to change. Contractors have found it difficult to fab plumbing piping within multistory buildings because the concrete floors get in the way of the extended fabricated piping from one floor to the other. ProSet developed a unique sleeving product that also can be used as a concrete-embedded PVC firestop, coupling with hubs built-in on both its top and bottom.

All the water closets, bathtubs, showers, lavs and sink openings have a bottom hub opening for fabricated piping to plug in to. Laying out the sleeve locations can be made with the AutoCAD ProSet symbol using the total station on the jobsite. The same exact sleeve layout should be made on the ProSet Fab table or floor. This will ensure the fab piping will fit into the hubs of the concrete-embedded sleeve couplings.

PHC: Are you saying that your ProSet sleeving system can easily be used as part of your pipe fabrication system?

KC: Yes, we even have a special name for this fab method — fixed-point fabrication. ProSet’s fab couplings are used as both the fixture openings and stacks when laying out a bathroom group by either using a fab table or using floor space.

Select the best stack location, then secure a fab coupling by using its fastening flange to the fab table. Locate all the other fixture openings using the proper size fab couplings to their exact locations using GPS or other methods. The connecting pipe and fittings connect into loose-fit fab couplings. The correct pitch on the branches can be made to the fixture openings by using a level during the fab piping assemblies.

Adjustable ProVent horizontal pipe hangers are used to hold the fabricated piping. The fab piping is then lifted out of the fab couplings and bundled up, ready to ship to the installation locations. This fab system also can be used for all underground fixture branches coming oﬀ the main drain.

PHC: How do the above-ﬂoor connections get attached to the lower-ﬂoor slab connections?

There are two proven methods of controlling pipe expansion. First, the embedded firestop couplings anchor and restrain the PVC pipe from moving between floors. Second, the flexibility of using expansion joints allows for controlled pipe movement from floor to floor. The ProVent expansion joint provides 1/2-inch to 3/4-inch movement and can handle up to 20 feet of piping between each story.

PHC: It sounds as if you’ve covered all the savings as well as providing additional vertical products that can be used for added savings when using the single-stack DWV system.

When using the ProSet firestop embedded sleeve coupling, be aware that the heavy-duty, Schedule 80-strength PVC sleeve coupling is approved to use in post-tension slabs — even when the cables are close to the sleeves.

PHC. Who should design this type of ProVent single-stack system? Do all the national plumbing codes approve all the mentioned products?

Sample engineered riser drawings are available from ProVent Systems. They show contractors and owners how the ProVent single-stack layouts compare with the labor and material costs of other conventional plumbing code-approved DWV systems.