One night in the most frigid temps can test even the self-employed contractors.

This winter had some of the coldest weather I can remember. In January 2018, the mercury plunged and hovered around the zero mark, barely making it out of the single digits during the day. It stayed like this for several weeks, which is very unusual for southern Pennsylvania. We get cold weather here, no doubt, and I have seen the mercury drop to -30 degrees when I was a kid, but usually it warms up again within several days. This time it didn’t. And to make matters worse, this artic chill was accompanied by violent gusts of wind, turning the great outdoors into a veritable “blast freezer.”

As a young man growing up in a big, wondrous world, I always listened to the adults around me. Most of the time I didn’t understand the meaning of what was being said, but it made me feel important just being there to listen. I remember thinking how these wise old folks had seen it all. It seemed not to matter how cold it was or how deep the snow was, they always had a better story.

Dad: “Kid, you haven’t seen anything. I remember back when the ice froze so thick, we could drive the tractor right across the ponds and lakes. Nope, it just doesn’t get cold like that anymore.”

My eyes got a little bit wider, and I regretted the fact that I would never get to see such a cool spectacle.

It didn’t matter whether it was snow, cold or heat. It was always the same; the elderly would always have tales of their youth that were so marvelous it would almost crush our enthusiasm. But I have noticed a change in recent years. My brother actually first pointed it out, and I agreed. The weather we have been experiencing in the last few years have really taken the “wind out of the sales” for the elderly folks with big weather tales of yesteryear. It seems our present weather situation is stacking up some serious competition for their tall tales.

This last winter almost made a person feel like maybe heating systems should be a little bit more robust. I typically design my systems for a low of 13 F, as is recommended by ASHRAE for this area. This design temperature is supposed to cover for 99 percent of the heating season. Typically, the one percent below 13 F would occur overnight and be a non-issue. This year, however, the temperature plunged well below 13 F overnight and barely reached a high of 13 F during the day. Some days, it didn’t reach it at all. This continued for about two weeks.

I was worried that I would start getting calls from homeowners who had purchased a heating system from me.

I could hear it already.

“What’s with this heating system you sold us? I thought this thing was supposed to be good. Now look at it. When we need it most, the darn thing can’t get the house above 60 F. You need to fix this and fix it now!”

This is what I was mentally preparing myself for. Yet, the phones remained silent in that regard. This kind of proves the point that so many in the industry have talked about over the years. There is a generous fudge factor built into most heat load calculations. It takes less heat to keep our houses comfortable than we think.

If this were not true, my phone would have been ringing non-stop for those two weeks.

My plans for the day

One of the perks of being self-employed is being able to plan your own days. No one gets to tell you what you must do this day, right? This seems to be the perception of everyone who is not self-employed but wishes they were. More often than not though, even our best-laid plans are trashed.

That’s what happened to me on one Friday this winter. This was during that frigid two-week stretch I mentioned earlier. I had been watching the weather forecast, and the forecast for Friday was: STAY INSIDE. Between the frigid temperatures and savage north wind, the conditions demanded that any civilized person stay inside. So, I planned my work accordingly. I worked overtime in the previous days so I could stay in the office all day Friday with Daisy curled up at my feet.

Daisy is a Cocker Spaniel and Golden Retriever mix. She is a good dog for the most part, but comes with a shoebox full of weird habits. Most dogs will go to their food bowl and eat their meal and then be done until they get hungry again. Not Daisy. I’ll sit at my desk while she curls up on the floor. Then she decides it’s time to eat. She gets up and heads for her food bowl, only to return with one kernel of puppy chow. She makes three circles, lie back down at my feet, and once she’s comfortable, she eats her kernel of food. Deciding that this wasn’t enough, she gets back up and does the whole thing over again. She repeats this until she is no longer hungry. I have never seen a stranger dog!

As I was sitting at the table eating breakfast on that fated Friday morning, I looked out the window and considered myself pretty lucky that I didn’t have to be out there. My plans had paid off; I had no calls to run.

My phone rings. It’s one of my loyal customers. An elderly woman who worries about everything. She has a red light on her thermostat. I told her that’s an indicator that the backup heat is running. It’s completely normal. Is the house warm I asked?

“Yes,” she replied. “But I really need you to come look at this.”

I had conflicting emotions about this, but I said sure, I’ll be right out. It was as I told her: everything was okay, and the backup heat was running. I was only there for five minutes. The only real service I gave her was peace of mind. How much is that worth?

Okay, now I can head back to the office and resume my perfect day. But on the way home, I go right past a convenience store I am working on. I still have an hour or two of electrical work to finish there, and then the job is done. It only makes sense to get that knocked out before resuming my day.

About the time I get all my tools out and have the first receptacle installed, my phone rings. I recognize the number of another loyal customer. He is an old Army guy with an unrivaled sense of humor. Our phone calls go something like this:

“Hello, this is Harvey.”

“Hey! It’s about time you answered your phone, you little squirrel.”

I laugh and ask, “How are you doing?”

“Oh, I’m nuttier than a fruitcake. Listen weasel, our heat isn’t working. The Bee is telling us we need service. Can you come out?”

I installed an EcoBee thermostat for them, which he always refers to as “the Bee.” 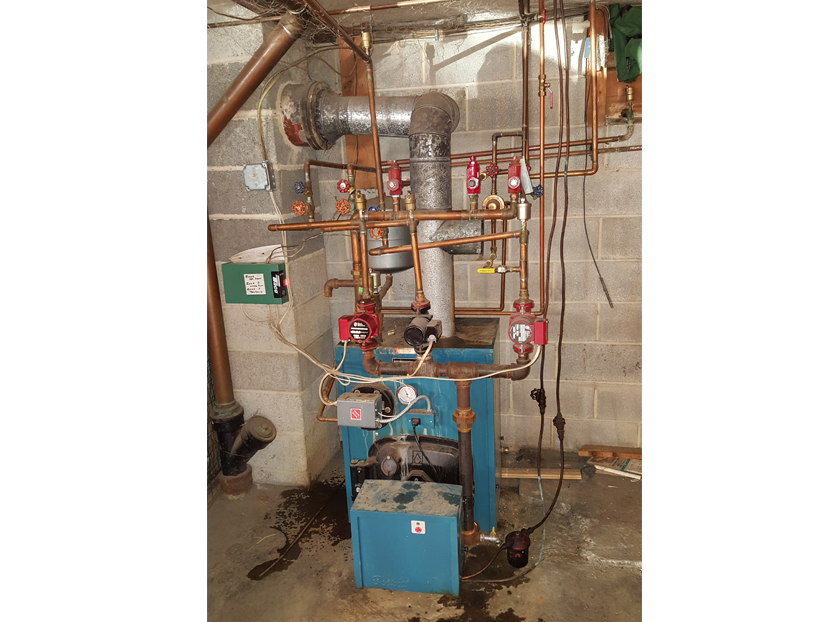 This guy has a 35-year-old Rheem heat pump system. I have been after him for the last four to five years to have it replaced. The system is beyond worn out. This time the fix was simple. I found a bad run capacitor on the indoor blower motor. After replacing the capacitor and verifying the motor amp draws, I put the unit back in service. By this time, I had given up on my plans for the day. I went back to the electrical job, finished it and then headed home for dinner. After a nice dinner, I headed for the living room with a beer. It was time to relax after a cold day.

Usually people rejoice when it’s Friday. Last day before the weekend. Everyone is happy. This Friday had it in for me. First it ruined my plans for the day, and then it kept right on and ruined my night. I was no sooner settled down for a relaxing evening with Daisy curled up at my feet when the phone rings again.

This time it’s a no-heat call for an oil-fired hot water baseboard heating system. They live about an hour away. It was starting to look like a late night.

When I walked into the boiler room, I was greeted by this:

This boiler looked like it was having a bad hair day. The installers must have been drunk and had a broken level. The unsupported piping was dangling over the boiler in a disheveled array. There was a smattering of connection methods. Screwed black iron pipe, solder joints that had solder running out of the joint like snot from a little kid’s nose and even a compression fitting or two. It had at least half a dozen air vents scattered around the piping. None in the right place. Half of them were leaking plus there was a leaking flow-check. My OCD began to scream and pound its fists against the inside of my skull. I wanted nothing more than to schedule some Sawzall surgery in this boiler. But they were not proud people. As long as they have heat, that’s good enough for them.

All this boiler needed was a good service to get the heat back on. Easy right? Most times it is. But this was late at night on a bad Friday. The young man living there began helicoptering around me while I was trying to work. He kept pointing to the leaking air vent, insisting this was the reason they didn’t have heat, and asking me why I was working on the burner instead of fixing the leak.

I tried to explain.

Not satisfied, he began a frenzy of googling on his phone hoping to find something to prove his misguided theory correct.

Once I had the burner firing, I began tuning it. I had my combustion analyzer running and was making minute adjustments on the burner when suddenly he comes up with something new to heckle me with. He took on an alarmist tone and began educating me about CO.

Once more I tried to explain what I was doing, but it fell on deaf ears. There was another frenzied session of googling and stumbling over my tool bag as he tried to come up with something to make him look smart.

If my parents hadn’t raised me right, I might have been less than a gentleman.

I finished up the job and headed home. As I’m driving down the road at 11 p.m. I’m thinking, “It would be about right if I got another call tonight. When it rains it pours.” No sooner did the thought cross my mind, and there it was. Another call. This was for the same heat pump I worked on earlier that day.

They said it is making a horribly loud noise and asked if I could come over.

I agreed and settled in for another hour-long drive.

This time the blower motor decided to give up the ghost. After running continuously all day to bring the house back up to temperature, the 35-year-old bearings couldn’t take it anymore and basically fell apart. Fortunately this job was within several minutes of a supply house that offered emergency service for their contractors. Even more fortunate, they had a motor that fit. So at 2 a.m. Saturday morning, I crawled into bed, utterly exhausted from my day in the office.