When the oven broke down in their nearly 60-year-old Costa Mesa, California home, Kyle and his wife Alissa had a gradual epiphany.

“After we set out to install a larger oven, we realized we wanted to update the kitchen, then the bathroom; before we knew it, we had decided to remodel the entire home,” he recalls.

As successful lifestyle bloggers, the Circles decided to turn this into a media project. “We envisioned an energy-efficient home, with smart technology, that would meet our needs for the next 50 years,” Circle explains.

Since the project began in September 2015, the home has nearly doubled in size. Structurally, 945 square feet were added to the original 1,268-square foot building, which now includes two new bathrooms and a new bedroom. Every interior wall was either moved or removed, except for three, and entirely new plumbing and HVAC systems were installed.

Most importantly for the couple, the home has become an eco-lover’s dream. Energy-efficient appliances and low-flow plumbing fixtures save electricity and water, as does solar-powered technology and LED lighting installed throughout. A reverse osmosis system reuses water, while charging stations recharge electric cars. 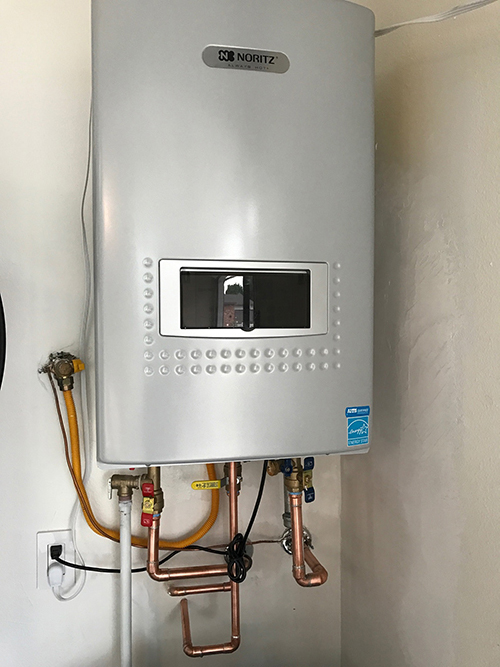 Fitting right into this green home is an NRCP1112-DV-NG tankless water heater from Noritz. “With its ability to provide hot water on demand without the need to constantly use energy to heat a large storage tank, this technology perfectly fits into our eco-friendly vision,” Circle says.

He first encountered Noritz technology at the International Builders’ Show the year before he began his project: “I was impressed with what I saw at their booth in terms of tankless’ energy-saving benefits. After that, I heard nothing but praise from plumbers, who called it the ‘creme of the crop for reliability.’ That, plus Noritz’s convenient proximity to my home, made choosing them a no-brainer for my project, and they were gracious enough to donate the unit.”

In particular, the NRCP1112 was chosen for its built-in recirculation function. A hot-water recirculation system operates through a “loop” created in a home’s plumbing system. In addition to supply lines connecting the water heater to each hot-water outlet, a standard recirculation system also contains either a return line back to the heater from each outlet, or from only the farthest fixture. A circulating pump moves hot water through this loop — in some systems, even when there is no demand for hot water — resulting in “instant” hot water when the tap or shower is turned on. “This will literally allow my family to have immediate, hot water on demand,” Circle says.

“I’ve been installing tankless water heaters for the past 15 years,” Stewart says. “I always recommend them to my customers because they’re compact, simple to install and provide as much hot water as needed, for as long as needed.”

Due to living in a hard water area, Circle had a water softener installed adjacent to the water heater, which is wall-hung in the garage.

“We put it right where our old, tank-style water heater had been,” Circle says.

Since the installation, the unit has performed optimally, serving four bathrooms, a laundry room and a kitchen, according to the homeowners.

“The ability to get instant, on-demand hot water is amazing, especially for my wife, who makes ample use of the soaking tub,” Circle says.

Energy savings have been particularly impressive. Circle reports that his gas bill shrank from a monthly average of $40 to $10. Similarly, his electricity bill dropped 27 percent.

“The energy savings are truly amazing, and they will pay for the unit many times over,” he says.

Tankless water heaters are increasingly proving themselves in high-efficiency homes across the country with their superior, green performance. More and more homeowners, like the Circles, are realizing that this technology is the wave of the future. “We definitely plan to use it on future media projects,” Circle predicts.