Project highlights why sitting down with the customer first is critical.

Growing pains. That’s what Seattle has.

The good news is that they’re growing more rapidly than most cities in the U.S. The bad news is that it’s a challenge to keep up with the pace of growth. The city’s downtown horizon is broken by dozens of giant tower cranes that — when seen against the backdrop of Mt. Olympus — look like scattered toys.

Most of the new construction in the city is commercial. The bulk of residential building projects are found just outside the metro.

Seaside property is still available along the hundreds of miles of Puget Sound shoreline both north and south of Emerald City. It doesn’t come cheap, and the parcels aren’t typically large, but the property’s there for the right buyer.

Anacortes, about an hour north of the city, is the location of a few recent residential projects for a family-owned company called Handy’s Heating.

Owned by Kelly Bailey, who purchased the company from his uncle in 2015, Handy’s Heating is a one-stop-shop for all home comfort needs. Their store in Mt. Vernon is full of fireplaces, water heaters, central vac systems and pellet stoves, but unitary HVAC equipment, ductless units, and custom hydronic systems are a large part of what the 26-person company offers. 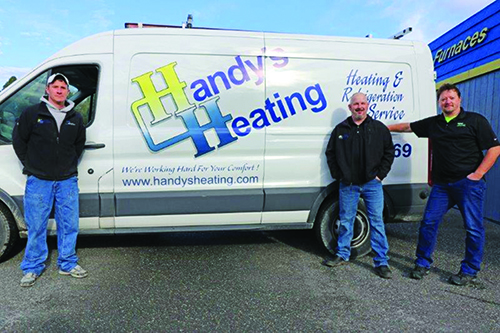 A good portion of their new construction work comes through Strandberg Construction, the premier, high-end builder in Anacortes. It’s a relationship they’ve fostered for eight years, and Handy’s is now their exclusive HVAC contractor.

“We have three main sales avenues that produce almost all our leads,” Bailey says.  “Relationships like the one with Strandberg are the primary source of new construction work. Store walk-ins provide a lot of business too, especially for retrofits and installation of fireplaces and unitary equipment.

“And, fortunately, we do very well with repeat business,” Bailey adds. “People who we haven’t spoken with in 20 years will call to upgrade their pellet stove, or maybe they’ve put on an addition or moved to a new home.”

And some customers call a lot more often than every two decades. There are plenty of cases where clients have become friends. This, Bailey explains, is a product of treating everyone like family — customers and especially employees.

“Don Dykstra is our lead hydronic installer,” Bailey says. “He’s been with us for about 10 years and is as much a part of the Handy’s family as my wife, nephews and sister-in-law who work here. He’s able to take intricate hydronic jobs from concept to reality.”

Dykstra’s most recent project was focused on premium efficiency and comfort, in order to offset both the chill and the heat loss that huge, north-facing windows can create in the Pacific Northwest.

House on a hill 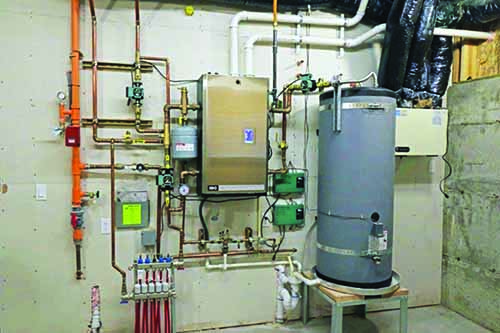 Strandberg brought the ultra-modern, 3,600 square-foot project to Handy’s in mid-2016 while it was still just a rough blueprint. It’s the third house in a small, gated subdivision perched on a hill that overlooks the Puget Sound.

“Typically, Strandberg facilitates a meeting between us and the homeowner and then takes a step back,” Bailey explains. “We work directly with the homeowner to identify what it is they really want and design a system from there.”

The two-story home is completely heated by an in-floor system. Seven zones of half-inch PEX radiant tubing is laid at varying widths; depending on the room and the distance from the exterior wall, anywhere between six and twelve inches. On the lower level, tubing is in the slab. Upstairs, a lightweight concrete pour was used.

The thin-slab approach allows for wider spacing and — when covered in natural stone — very low water temperatures. With an outdoor design temperature of 23 F, the system’s supply water temperature averages 99 F. That’s impressive, considering the amount of glass on the home’s north façade.

Like most homes built in an ultra-modern architectural style, the hillside home has a Spartan, stoic feel. Clean, straight lines frame the space, while slabs of glass and stone give everything a flat, lineal appearance. Trimless doors are installed to further polish indoor architecture. Ceilings are high, and stair treads seem to hang in space. 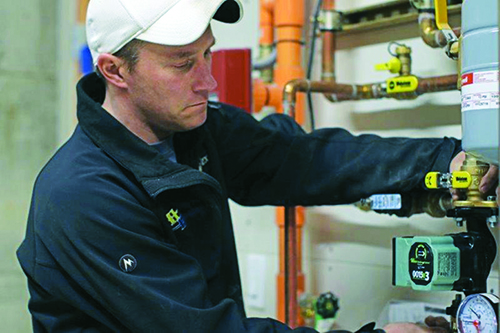 Every element of the HVAC system carries the same trend. The hydronic system is relatively compact and void of anything at all that doesn’t make the home more efficient and comfortable. Even the thermostats are hidden, most often with the use of tiny wall sensors which are wired back to T-stats in the mechanical room.

“Our typical strategy for pumping a residential hydronic system is to put a three-speed pump on the boiler and indirect water heater, and one or more variable-speed circulators with zone valves on the system side,” Bailey says.

“We’ve always used three-speed pumps and carry spares on all the trucks simply because one pump will fit 95 percent of the residential jobs we service,” he continued.  “The issue on this project was that the homeowner was very specific about installing the highest efficiency products on the market.”

“We use Taco controls all the time, but in the past, it’s been rare that we’ve installed Taco circulators,” Dykstra says. “We needed to use ECM pumps on this job, and I wanted to keep three-speed pumps on the boiler and the water heater. The new Taco 0015e3 is the only circulator on the market that checks both of those boxes.”

The 115 MBH condensing boiler, made by IBC, and the 60-gallon Heat-Flo indirect tank are each pumped by a Taco 0015e3, while the in-floor loops use a Taco VR1816 delta-P, variable speed circulator.   The seven zones are split into two manifolds; one set in the mechanical room and another hidden in an upstairs closet.

“It wasn’t just the boiler system that was designed to shrink the home’s carbon footprint,” Bailey explains. “The house is extremely well-insulated, and there’s a photovoltaic solar array on the garage roof capable of producing up to 8,000 kWh annually. We also installed a 149 CFM Fantech whole-house ERV.”

The ERV not only provides tempered fresh air to the home, but can also circulate indoor air throughout the living space for even temperature.

“In some ways, these high-end projects are more work in that there are typically more details to see to,” Bailey says. “Like on this job, hiding the Honeywell T-stats required more work than usual. But the gratifying part is that we’ll often talk to the customers a year after they move in, and they’ll be completely satisfied with how it operates.”

Bailey says it’s critical to sit down with customers before the home is built. This shouldn’t just be left to the general contractor. The facetime will determine what it is the homeowner really wants, and how best to deliver it within their budget.