Electricity is Your Frenemy

When central heating first came about, there was no electricity to be found in a heating system. That’s hard to imagine as we look at our modern systems with all their digital control boards, electronic valves of every flavor, and circulator pumps to move the heated water through the pipes, making a never-ending loop between the emitters and the boiler.

The lack of electronics certainly didn’t stop the old-timers though. They installed what we today call “gravity systems.” We call them his because gravity is what made them work. There were a few different types of gravity systems, but they all worked on the same principal. As water heated up in the boiler, it expanded and became less dense, and therefore lighter. The water in the returns was still cool, and therefore heavier than the heated water in the boiler. The heavier return water entered the bottom of the boiler, pushing the heated water upward into the system.

Thus begins the circulation of water in a gravity system. The water continued to circulate as long as there was a fire in the firebox. The hotter the fire, the faster the water circulated. And of course, the faster the circulation, the more heat went into the house. That’s why it took a skilled person to build the fire just right. On a warmer day, you would want a fire that burned long and slow, at a lower temperature. On colder days, you would want a hotter fire to keep the house warm.

Then the thermostatically controlled damper came along. This invention was genius in its design. It also took some of the required skill out of building the right kind of fire. Instead, all you had to do was load the firebox and set the desired water temperature for the day. The thermostatic control had a sensing rod filled with a gas inserted into the water at the top of the boiler. It also had an arm coming out of the side, with a chain attached. On the other end of the chain was the make-up air damper for the firebox. As the water heated up the gas in the sensing chamber, the gas would start expanding and push on a piston or diaphragm inside the control head. The mechanical linkage inside the control would act on the arm and start lowering it, allowing the make-up air damper to begin closing. As it closed, the fire would get less oxygen and start burning at a lower temperature, heating the water more slowly. 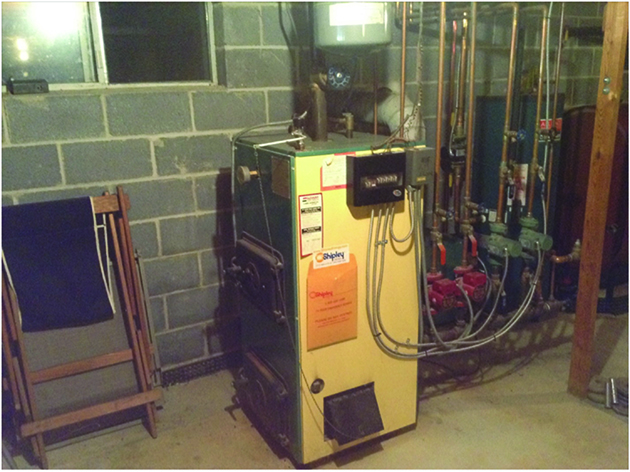 In the picture to the right, you can get a visual of what that control looked like mounted on a boiler. That boiler is a 40-year-old unit that was built to burn wood, coal or oil. We just replaced it with a new cast iron oil boiler. That old boiler sure was heavy!

It was beautiful and simple how these old systems worked. Almost a century later, there are still many of these systems in operation. Most of them, however, now have a circulator pump installed and a more modern boiler in place.

Electricity has given us a lot of flexibility when it comes to installing new systems. We can use much smaller pipes now, and we can run them in almost any direction without having to worry about creating thermal traps. Our boilers are much smaller and not nearly as heavy. That sure is nice when you are installing one. We have a whole smorgasbord of electronic gadgets to choose from when we are installing a system — everything a person might need to perfectly control the temperature in each room of a building.

Electricity also allowed the use of many varieties of heat emitters. The old-timers, to a large extent, only had to choose between radiators and some types of convectors. Now we can install radiant floors and ceilings, baseboard, panel radiators, hydro coils, just to name a few.

But for all the good things electricity has done for heating, it’s also the source of most of our problems.

A few weeks ago I got a call from a lady who said her boiler just shuts off sometimes.

“Well,” she said. “I don’t know what’s going on. Sometimes it runs for a couple of days, and then other times it will shut off in an hour.”

Knowing that someone else must have looked at it already, I asked, “So what’s it doing when it shuts off? How are you getting it to run again?”

By this time I had detected that she was an elderly lady, and her mind was starting to fail her. My heart bled. I had to help her

She replied, “Every time there is no heat, I find the circuit breaker tripped in the electrical panel. I turn it back on, and then the heat runs fine for a while, then it trips again. I had the service tech from my oil company out, and he said it’s not the boiler, it’s an electrical problem.”

“And what did the electrician find?”

“He said it’s not an electrical problem. He said it’s a boiler problem, and I should call you.”

Okay, this should be interesting, I thought.

I told her I would come out that day, even if it was after hours, because it was getting cold, and I didn’t want to leave her without heat. Upon arrival, I chatted with her briefly and then headed down to the basement.

Sure enough, it was as she had said. The circuit breaker to the oil boiler was tripped.

I turned the breaker back on, and the boiler fired right up.

I began the electrical diagnostic. I checked the amp draw of the boiler, and it was fine. I checked every electrical connection from the disconnect switch to the burner and circulator pumps. All checked out fine. Not ready to give up, I did an extended run test. I just invented that phrase, but basically what I do is record the current draw when I first start up a piece of equipment. Then I force the equipment to stay running for as long as I can, all the while watching the current draw, looking for any increase after an extended run period. That’s a good way to find failing bearings. Bearings that have too much wear or not enough lubrication will sometimes spin freely while they are cool, but after a long enough run time, friction will cause them to heat up. When they get hot, the metal in the bearing expands and the bearing gets tight, increasing the load on the motors, and in turn, increasing the current draw to the equipment.

But it wasn’t going to be that easy. There was no spike or fluctuations in the current. I thought, well, maybe it’s a bad breaker? They do go bad sometimes, but not very often unless someone is using them as a switch.

Convinced it wasn’t the boiler, I looked elsewhere, and that’s when the success started. I thought maybe there was a partial short somewhere in the cable that supplies the boiler with power. This was the old cloth jacketed wire so anything was possible. It was also very hard to see the wire up against that old wood. Especially in a dimly lit basement with 10-foot foot ceilings. As I traced the circuit, I came to a junction box. There it was. There were two cables coming out of the box and only one going in. Now we had a new suspect to investigate. 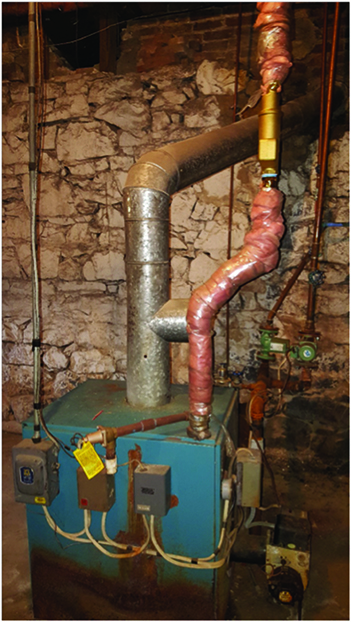 I traced down the second cable coming out of the junction box. It led me to a second junction box, where it split again. One cable went to what looked like a low voltage control box.

The other cable ran over through the old coal room in the basement, and then exited the house through the rim joist. I had no idea what the low voltage control box was for, so the next logical step was to go outside and see where that cable led. It was getting a little dark by this time so I grabbed my flashlight and headed upstairs.

On my way outside, I ran into the lady of the house again. I told her I think we had an electrical problem.

She sighed in exasperation.

I quickly reassured her that I wasn’t done working on it yet, and that I would find the problem.

Then she told me about her home security company. I listened attentively as she explained that her security system would randomly shut off. She said they were out several times to fix it, but it kept happening until last visit when they did something in the basement, but she wasn't sure what.

As I headed outside, I couldn’t help but wonder if the security system issue was somehow related. Once outside, I found where that other cable exited the rim joist, and quickly traced it up to a floodlight into the corner of the house. I didn’t find a switch anywhere to turn it on though, so I approached the homeowner once more.

I asked, “Do you have a switch somewhere to turn this floodlight on?”

“Oh,” she responded. “I don’t think I do, but it hasn’t been working lately anyway. I was meaning to talk to you about that as well.”

“What makes it come on?” I asked. “You don’t have a switch, and there is no motion sensor or dusk to dawn sensor on the light.”

She said, “Well I think it used to come on when a car would come into the driveway.”

Now that I knew where all the wires went, I was ready to test the circuit. I activated the switch leg that was meant to turn the lights on. Immediately, I heard a click from the panel box over in the coal room, and the boiler also shut off.

I disconnected the cable that fed the light and then reset the circuit breaker. The boiler came back on, and we were off to the races.

I gathered up my tools and headed back upstairs. I told the lady I fixed the problem.

“The floodlight in the corner of the house is broken,” I replied. “It has an electrical short in it, and we will have to replace it.”

She looked at me like I had two heads, and I understood; floodlights have nothing to do with boilers.

I told her that I was going home, but reassured her that her heat would stay on now. I had also noticed that there was no means of air removal on the system, so I asked her if she would let me install an air separator when I came back to replace the flood light.

A couple days later, I was back on site and installed the new floodlight and the air separator. She was pleased to inform me that the boiler had not shut off.

And that’s just one example of how electricity, which is our friend most of the time, but can also wreak havoc on an elderly lady’s boiler.